Accessibility links
For Babies, Preterm Birth Is Now The No. 1 Cause Of Death : Goats and Soda For the first time, the single greatest threat to a newborn's life is not a specific disease. Rather, it's the fact of being born prematurely. 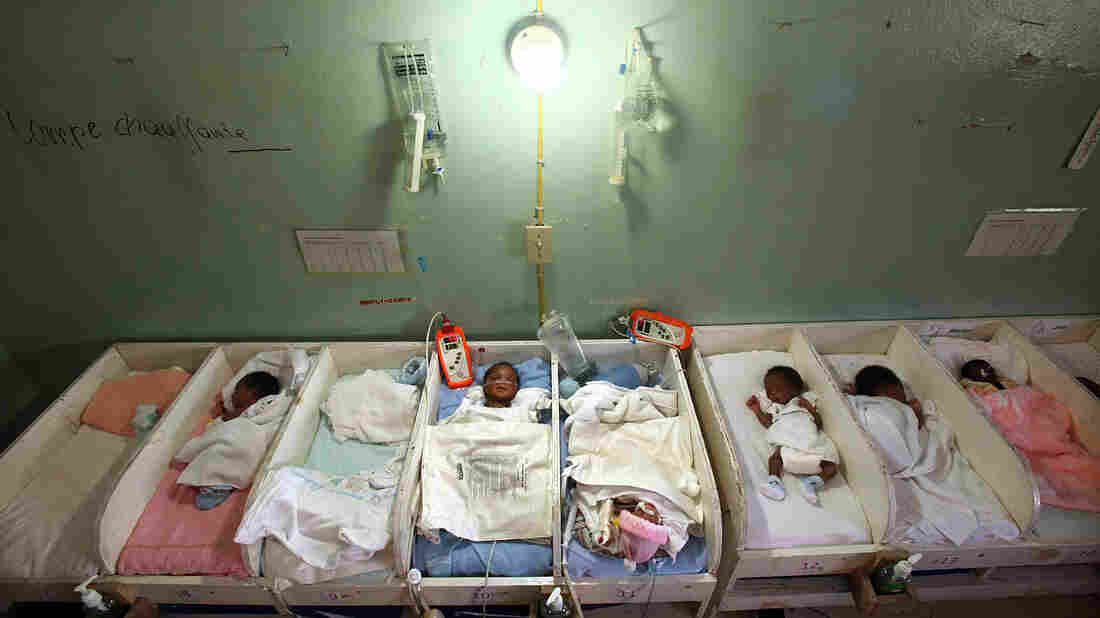 Premature and sick babies are cared for in the neonatal unit at Isaie Jeanty maternity hospital, operated by Doctors Without Borders in Port-au-Prince, Haiti. Mario Tama/Getty Images hide caption 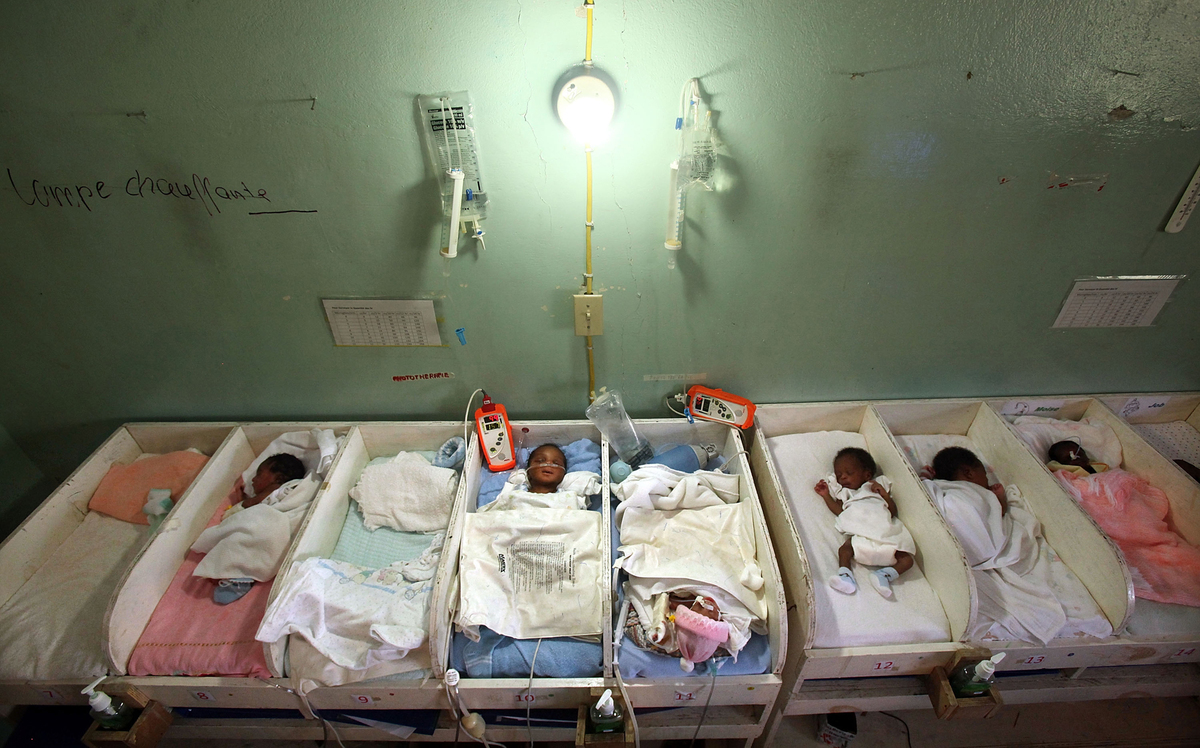 Premature and sick babies are cared for in the neonatal unit at Isaie Jeanty maternity hospital, operated by Doctors Without Borders in Port-au-Prince, Haiti.

Babies around the world face a lot of risks to their health: pneumonia, diarrhea and malaria, to name a few.

But it turns out that no single infectious disease takes a greater toll than the simple fact of being born premature.

Premature birth is now the single largest cause of death among babies and young children. Every year, 1.09 million children under age 5 die due to health complications that stem from being born before week 37 of pregnancy (a 40-week pregnancy is considered full-term). 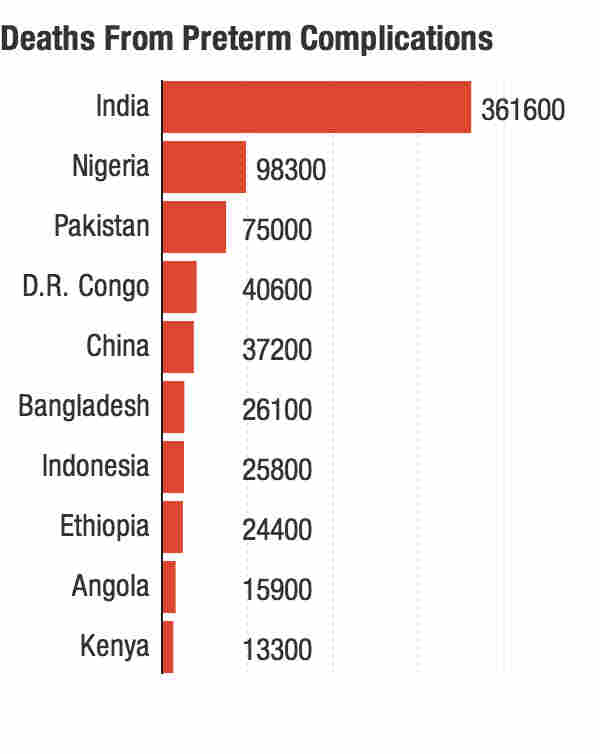 The countries with the greatest number of babies dying from preterm complications in 2013. The UN Inter-Agency Group for Child Mortality Estimation. Levels and trends in child mortality: report 2013. hide caption 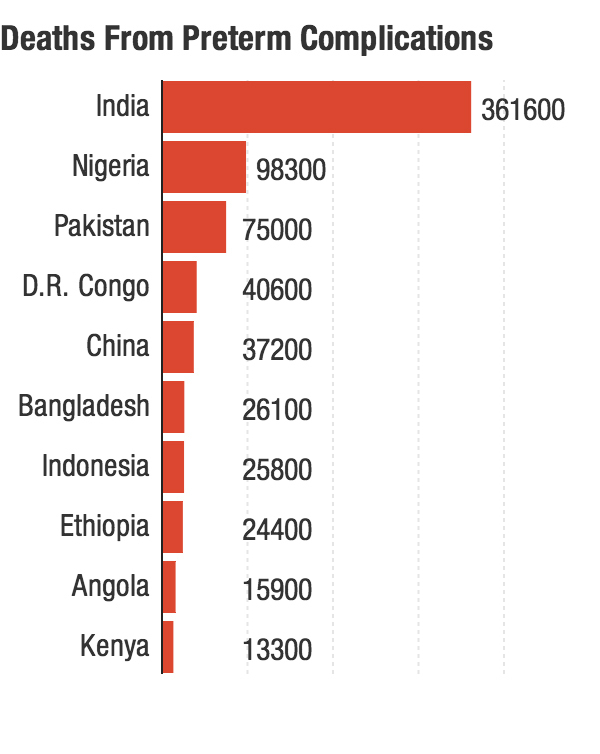 The countries with the greatest number of babies dying from preterm complications in 2013.

A report on the toll of prematurity was published in The Lancet. Researchers from the World Health Organization, the Johns Hopkins Bloomberg School of Public Health and the London School of Hygiene and Tropical Medicine looked at the causes of child mortality in 194 countries from 2000 to 2013.

An editorial in this week's Science Translational Medicine published today, on World Prematurity Day, pointed out that it's the first time an infectious disease has not been the leading killer of children under 5.

To learn more, Goats and Soda spoke with report co-author Robert Black, the director of the Institute for International Programs at the Bloomberg School of Public Health at Johns Hopkins University.

How can premature birth lead to an early death?

It's a two-part answer: When the birth is premature, the organs are not yet fully formed, and that can lead to lungs that are very immature, that don't open as well as they should. Many of these babies can survive with intensive care, but in low-income countries, for the most part, neonatal intensive care is not available. The second part: Babies born premature are more fragile, more susceptible to infection. It may not happen at the time of birth but can happen soon after, during the first month of life. They may get pneumonia, sepsis, a systemic infection.

Which countries have the highest rates of preterm birth and why?

The highest rates of preterm mortality are in West Africa. There are about 16 deaths for every 1000 live births. The countries with the highest numbers of babies dying from preterm birth complications are India, Nigeria and Pakistan.

Does this mean premature birth has overtaken infectious disease as the No. 1 killer?

The editorial about your study suggests that "kangaroo mother care," where the baby is held skin-to-skin on the mother's chest, is an easy and cost-effective way to prevent hundreds of thousands of preterm newborn deaths. Is that really true?

In low-income countries, things can be done that would prevent many of these deaths. On the maternal side, there are prevention efforts such as improving nutrition and reducing infections, especially syphilis. Smoking reduction would help, too.

From the newborn side, thermal care needs to be taught. Once a preterm baby is born, it does need to be kept warm. Often, a baby is kept without being wrapped up or taken care of when delivery is still going on — even in India, where people tend to think of as a hot place. But in houses in northern India, during some times of year, the temperature can go quite low and can be dangerous to babies. So, yes, kangaroo care is recommended — for keeping babies warm and initiating breast-feeding. Thermal care and breast-feeding are two major things that could help reduce deaths.

How serious a problem is preterm birth in the high-income world?