Accessibility links
Toilets 'R' Him: Jack Sim Wants A Potty In Every Pad : Goats and Soda The Singapore activist created World Toilet Day in 2001, got U.N. sponsorship last year and posed for us on a toilet outdoors on a freezing day. That's how committed he is to bringing toilets to all. 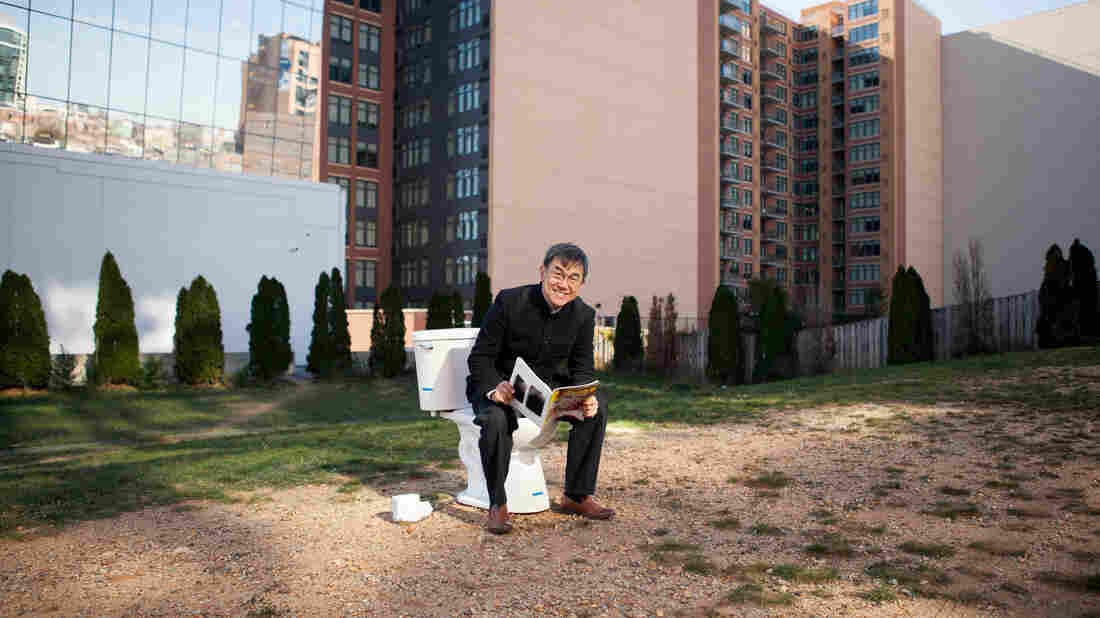 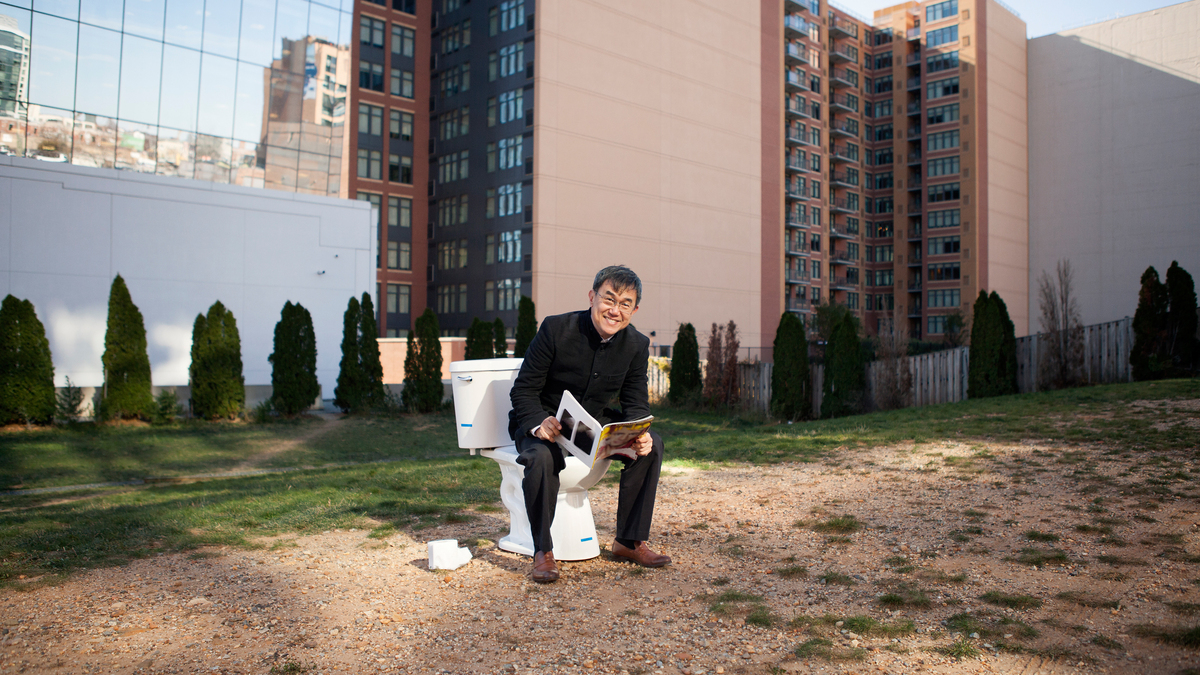 Jack Sim's career is in the toilet — literally.

The 57-year-old Singaporean made his fortune in the construction industry when he was in his 40s. And he wanted to make a meaningful contribution to the world.

Sim tried his hand at saving historic buildings and answering phone calls from people in distress, but neither felt right. "I was looking for something that was neglected and able to serve large number of people," he says.

That's when he came across a quote from Singapore's then-prime minister in a news article. "He said we should measure our graciousness according to the cleanliness of our public toilets," Sim says.

Sim had long bemoaned the sad condition of public toilets in his native country: "At first I was just trying to solve Singapore's dirty toilet issue, and then I realized that in the world, there are a lot of people who don't even have toilets."

So in 2001, he founded the WTO — the World Toilet Organization, that is. It's a nonprofit coalition of leaders from more than 40 countries who try to come up with innovative solutions to tackle the world's sanitation and water problems.

Together these loo lovers started the World Toilet College and SaniShop, initiatives that train entrepreneurs not only to make household toilets but also to maintain them and market them in the developing world. More than 4,000 people have been trained since 2005; the WTO says that up to 10,000 toilets were assembled in 2010 alone.

The same year WTO was founded, Sim and his colleagues established World Toilet Day to draw attention to the fact that 2.5 billion people in the world still don't have access to a proper toilet or clean water. The United Nations officially adopted the day last year. Today Sim is at U.N. headquarters, speaking about how lack of sanitation takes a particular toll on women.

To commemorate World Toilet Day, what better way than to sit down with the man who now proudly claims the name Mr. Toilet — and who did in fact sit on a toilet (in a cold and windy field) for our photo.

How do you get people to talk about toilets?

When we make people laugh, they listen. Although the subject is very embarrassing, it's become very palatable. The only prerequisite was that I could make people laugh and I could laugh at myself. When they laugh at me, it's fine. Once I got myself psychologically adjusted to that, then everything works.

The toilet is like sex. Long ago it was very difficult to talk about sex, and then Hugh Hefner came along with Playboy magazine and legitimized sex. Now people are singing about making love in songs and all that. So I think eventually we'll be able to sing about going to the toilet in a very natural and enjoyable way. I think we have to gentrify this taboo subject by first moving from taboo to funny to sexy and then to normal.

What's a misconception we in the world of high-end toilets have about toilets in the lower-income countries?

That if you give toilets to people, they will use them. Open defecation [in a field, on the street, wherever] has a lot of advantages: It's free of charge and you don't have to buy [soap]. You don't have to empty the toilet. It's a norm from centuries and generations. So first you have to make owning a toilet not just rational but aspirational. You have to make a toilet come with bragging rights, like a Louis Vuitton handbag.

Aspiration is important, as you can see even rich people have really nice toilets — they go for the highest level all the time. So this is the same as the poor people. They aspire to own products that have bragging rights, like a cellphone or television. The psychology is exactly the same.

What kind of toilet would appeal to the untoileted world?

[The toilet] must be close-looped. That means you can empty [the waste] and you can recycle the nutrients. If it ends up in the river and the lake and contaminates the water, it spreads disease.

This year, the theme of World Toilet Day is "Equality, Dignity and the Link Between Gender-Based Violence and Sanitation." What's your take on that?

In the poverty sector, women suffer a lot when they have to defecate in the dark early in the morning or at night. [They face] peeping toms, rape and molestation. During the day they can't go to the toilet because there is no privacy, so they try not to drink water and they become dehydrated. Girls drop out of school when they are menstruating because schools have no toilet.

Having a toilet has to become a norm, and it has to happen very quickly. The first thing is get people to discuss it. Then they'll get angry and realize that this is not fair and they'll take action.

Building toilets and then getting the whole world to need and want toilets is a big goal. How optimistic are you?

Long ago, when Singapore was a developing country, I was a child (I was born in '57). It was a very poor country with open defecation, with a hut over the pond where we drop [our waste], and then the fish would come and eat [it]. Today it's the third-richest country per capita in the world. I know that poverty can be transformed if you think of it as an entrepreneurial approach. So teach people to produce the toilet, and drive demand and supply. Make everything efficient, and you can solve the problem.

You said earlier we should sing about toilets. What do you have in mind?

I've already thought of a concept — it's about lovers dining and wining. Then they start quarreling, and the girl dumps the flower [the boy had given her] and leaves. And the guy will say, "The joy is brief, but letting go is such a relief." Then he's sitting on the toilet bowl, letting go and reminiscing about the wonderful time with his girlfriend by the river. But everybody is defecating in the river. So [he stops them], and all the people who were defecating start walking into toilets. The river becomes clean again, and his girlfriend comes back to him.

That would be a really nice song, if I can find a singer, a scriptwriter and a videographer all together.

Who would you want to work with?

Maybe Adam Sandler? I think that there should be a lot of comedians who can do a good job and who are not too shy. Maybe Jennifer Lawrence — she would be perfect for it, and [I could listen to her] talk about toilets all day long.