Accessibility links
Ebola In Remote Liberia, Through The Eyes Of A Local Health Worker : Goats and Soda Amid hopeful news from Liberia of dwindling numbers of Ebola cases, an outbreak of the disease started late last month in a remote part of the country. Health worker Lorenzo Dorr gives us an update. 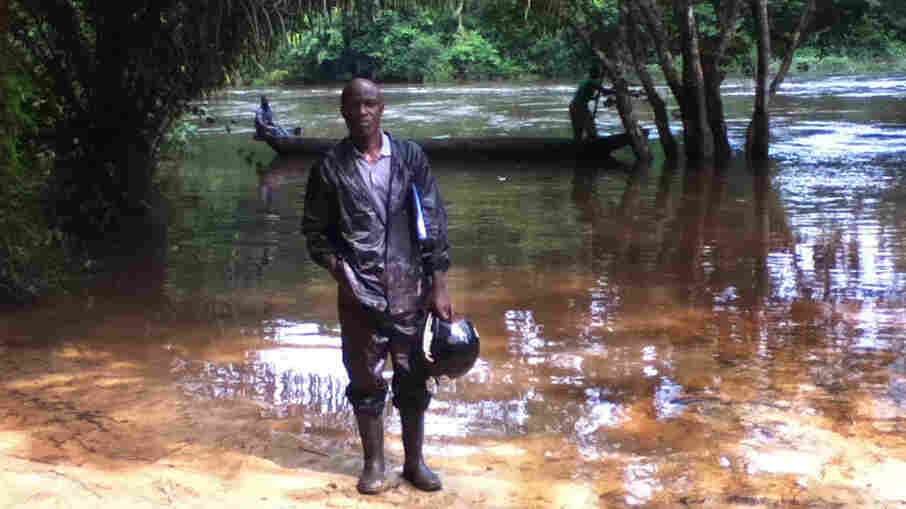 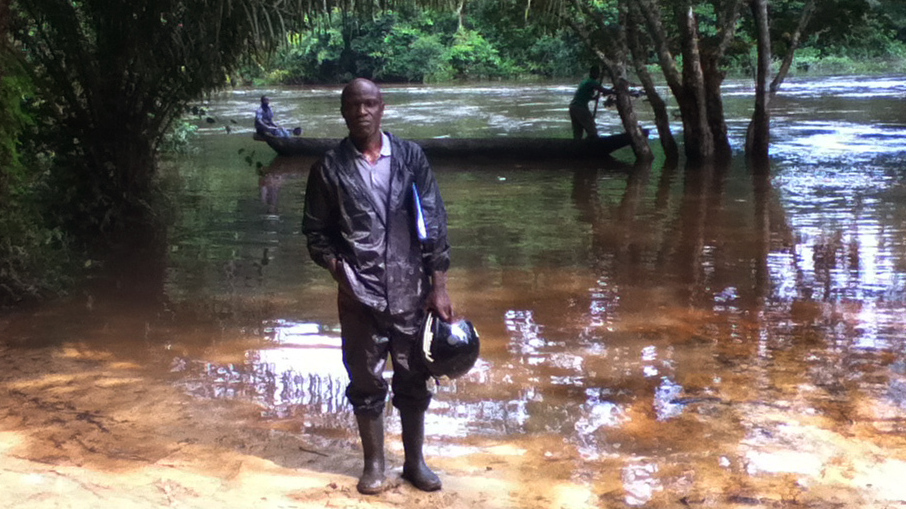 Even as encouraging reports come out of Liberia that Ebola cases appear to be leveling off or declining, it's not the full story. In recent weeks, there was a major outbreak of Ebola in scattered villages of Rivercess County, in the remote, southeastern part of the country where Lorenzo Dorr, a Liberian health worker with decades of experience, is helping to improve local health systems.

Goats and Soda introduced Dorr back in September. He's been working with Last Mile Health, known in Liberia as Tiyatien Health, a nonprofit started by a Liberian-born physician that trains and deploys community health workers in remote areas. That kind of approach is more critical now than ever — not only to keep Ebola in check but also to prevent future epidemics. Liberia's southeast has been relatively unaffected by Ebola — but this outbreak, with 24 deaths so far, shows that even far-flung areas are not immune. Dorr spoke with Goats and Soda from Cestos City, the Rivercess County capital.

How did the outbreak begin?

On Oct. 21, a lady who came to the county from Monrovia fell sick. She didn't seek care from a health facility. Instead she relied on traditional medicine. She sought treatment from drug peddlers and traditional healers. She eventually died. News came to the city. The traditional council spokesman in the area, when contacted by the Rivercess County Health Team, instructed the community that nobody should touch her body, but the people didn't listen. Before the response team from the county health team arrived to the community, they bathed and buried her. A few days later they all started to get sick and began dying, one after the other.

There's a patient now who is positive and his wife is showing signs and symptoms, their child is a probable case. They are living in their home in a town about five hours' drive from Cestos City. We want to get them out but have not been able to do so. The roads are so bad that the ambulance could not access the community when it tried to move in. The bridges were broken.

A total of 94 contacts were identified. Twenty-three who were considered strong contacts were sent to the Ebola treatment unit in Monrovia. Currently, 71 contacts are being monitored in the community. But some unidentified are still on the run, and they could infect other people. So there might be other deaths in the days to come.

What's the overall mood in the county?

It's 100 miles away from Cestos City to the affected area, five hours' drive, so the mood is quiet. Not many people have a real sense of the gravity of what is happening because they are so far from it. But health workers know the gravity of the issue. The level of care has not increased since the outbreak. There is no proper isolation center here. They use the hospital emergency room for isolation. That is not recommended. An isolation unit should have its own sanitary facilities. It should not be sharing latrine facilities. So there is still a huge gap in the system. And not only here, but also similar gaps are present in other parts of the country.

The poor condition of roads has hampered the Ebola response in remote parts of Liberia. Courtesy of Last Mile Health hide caption

The poor condition of roads has hampered the Ebola response in remote parts of Liberia.

What are the conditions in the affected area?

Food security has become a challenge as farming activities have been abandoned. A traditional healer reported that because of fear of Ebola, people are not going to work on farms. People normally are working in groups, they get together — but in this time people are not moving from place to place. They stay in one place as the entire region has been temporarily quarantined. The food situation is very serious in the areas that are worst hit.

Food security is also a problem for those held in isolation [because of suspected Ebola]. The logistics to move food to isolated areas is rather difficult. Even when food is available, delivery is affected by lack of good roads. Even if there are vehicles, they can't move in because of broken bridges.

The dry season has begun to set in, and the rainy season is fading away. But the roads are still bad. I just feel for those being affected. Even to get an ambulance to pick up the sick continues to be a very big challenge. An MSF [Doctors Without Borders] truck could not pass on the road, it could not enter a town and had to unload the truck to get materials into the town. The villages are scattered, without roads, so contact tracing is also difficult. You can't easily communicate due to lack of access to the mobile phone network in the affected area and surrounding towns and villages.

What are the other challenges?

There are a lot of misperceptions about the Ebola response process. The community has its own perceptions about the whole Ebola issue. Initially people didn't listen to health workers' advice. They didn't understand what it means to protect yourself. Some didn't believe the disease exists, not until a lot of people began to die.

Many people believe health workers are carrying the Ebola virus. In one of our daily health coordination meetings held at the county health team in Cestos City, it was reported that some community members were resentful because of the new thermometers, they point it to your head and people said it's like an Ebola gun stuck to your head and will give people Ebola. It's the first time this kind of thermometer has been used in Liberia and some people didn't understand what it was. It takes so much to help people understand when you are doing something that is unusual. People are gradually accepting the use of the thermometer. These are some of the challenges we health care providers are faced with.

What's your focus at this point?

Our concern is to help the Rivercess County Health Team prepare to respond effectively. The team is very hard-working, very passionate about the Ebola response and about bringing this situation to an end. We're going to roll out infection prevention control training to healthcare workers. And we will be training community health workers on contact tracing. For community health committees, midwives, traditional and prayer healers, drug peddlers and other key stakeholders at the community level, we'll do training on contact tracing, infection prevention control and establishment of referral systems from the community to medical facilities. We are training health workers how to break the transmission chain. This will be an important step at this critical time. There is a lot more to be done. It needs a concerted effort.