Accessibility links
When A Stray Dog's In Trouble, Katmandu's Canine Rescuers Jump To It : Goats and Soda The city is home to some 20,000 strays. They roam the streets, they beg for food, they howl and fight at night and they often need medical help.

When A Stray Dog's In Trouble, Katmandu's Canine Rescuers Jump To It

When A Stray Dog's In Trouble, Katmandu's Canine Rescuers Jump To It 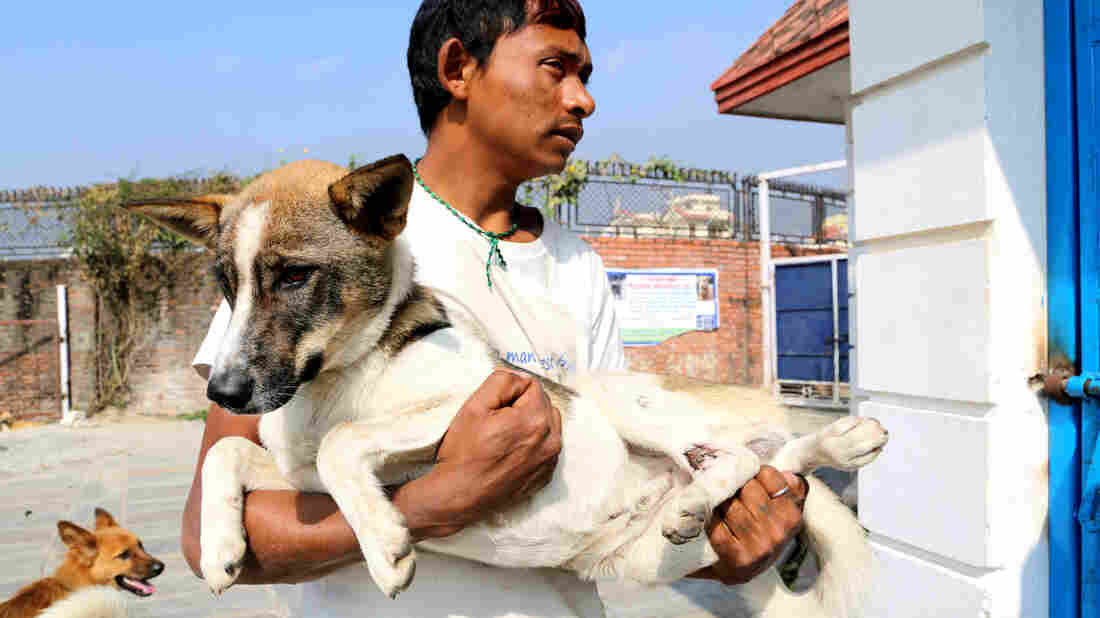 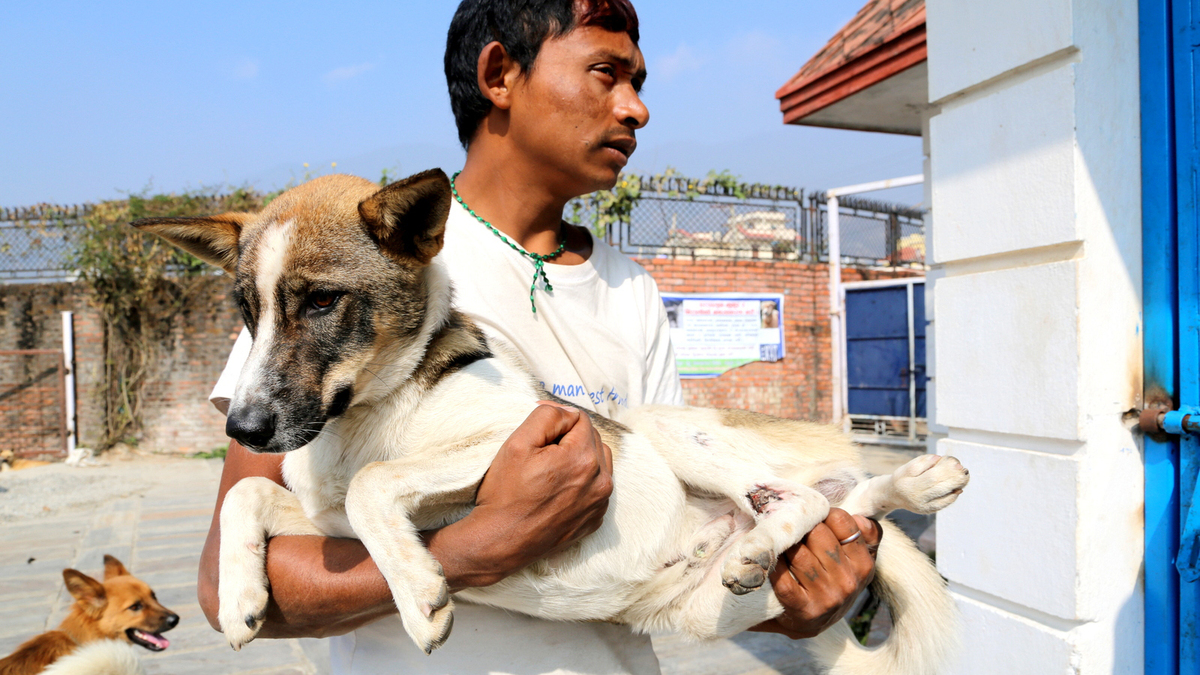 Ram Nagarkoti responds to emergency calls and brings injured dogs to the triage room at the Kathmandu Animal Treatment Centre.

The phone calls start in early morning. They are strikingly similar.

"There is an injured dog on the street. Can you take care of it?"

Ram Nagarkoti, the 31-year-old ambulance driver at the Kathmandu Animal Treatment Centre (KAT Centre), often spends his days zigzagging through traffic, waving at police officers as he edges across chaotic intersections and squeezing into labyrinthian alleyways to find his patient — one of 20,000 stray dogs in Nepal's capital.

In flip-flops, baggy pants and a well-worn white T-shirt, Ram looks more like a wandering hippie than a driver/animal medic. This particular morning, the injured dog was a mutt of medium build with thick black hair who lived with seven other strays on the compound of a Hindu temple. A shopkeeper made the call when she noticed the dog could no longer walk and refused food handouts. 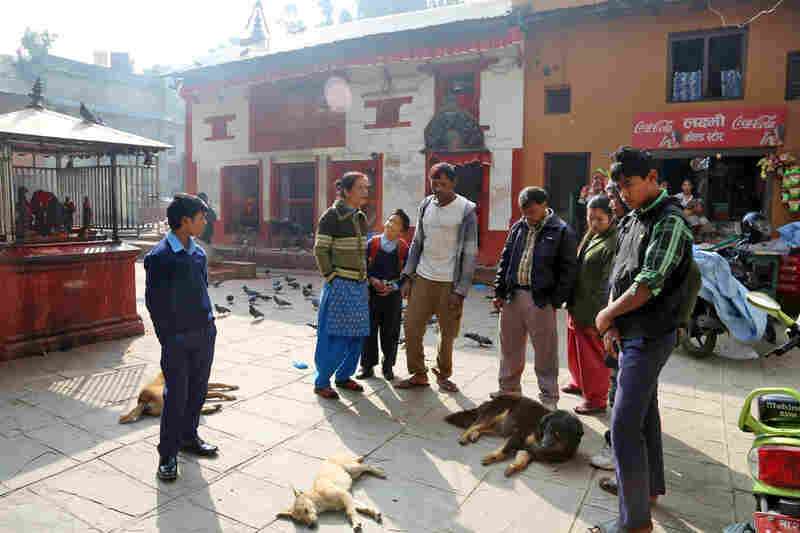 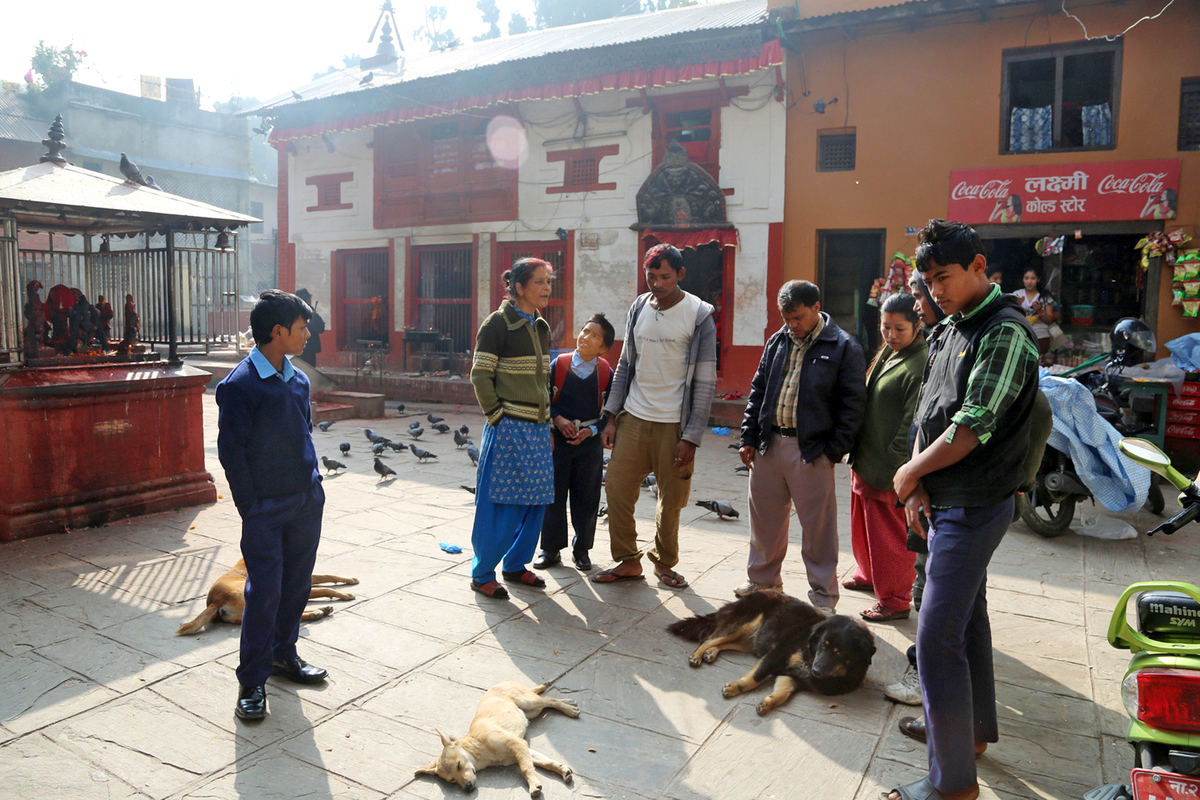 Nagarkoti tells community members how the center vaccinates, as well as spays or neuters stray dogs.

Ram knelt down, caressing the dog as he tried to figure out what was wrong. Before moving the mutt, he also did a quick health survey of the temple's other canine residents. As the shopkeepers began hovering around him, he slipped into an impromptu talk on animal health and the need for birth control.

"A healthy dog means a healthy community, and these dogs all need to be vaccinated and fixed," Ram told the gathering crowd, explaining to a curious lady how females are spayed (for free at KAT). He then turned to one of the temple beggars and to the man's surprise taught him how to carry the dog to the ambulance. The beggar was grinning from ear-to-ear and asked to pet the dog after setting him down.

It is easy to lump the stray dogs of Katmandu into one large category: destitute, miserably hungry, unloved, unhappy and most critically, unvaccinated and unneutered. Yet that's just part of the picture. Some Nepalis keep dogs as indoor pets or as guard dogs, chained outside their houses. Many others contribute to the care of the so-called "community dogs."

These strays roam across a few blocks of streets. They drink from drainage ditches that double as open sewers, politely beg from shops and fill the night with their baying, howling, snarling, yelping and ululating barks. In the winter, cold kills the weak. In the dry, hot months, thirst kills. Puppies have a particularly high death rate. Wounds from nighttime fights fester. Many dogs suffer from starvation, infected open sores and mange.

They also spread rabies. Dogs are the main source of transmission in Nepal. The government estimates that 200 people a year die of rabies while another 35,000 receive the expensive series of post-bite shots.

The KAT Centre is one of three nonprofits that divide up the city (and its stray dogs), vaccinating, doctoring and conducting neighborhood awareness programs. Based in a house with a large yard, the center has eight employees, including two veterinarians, a flow of local and international volunteers, and about 50 stray dogs and a few cats in its compound on an average day. The operating room is open five days a week.

KAT's goal is to humanely reduce the number of stray dogs by creating a healthier, rabies-free street dog population. Founded in 2004 by Jan Salter, an internationally known painter who has lived in Katmandu for almost 40 years, KAT conducts on-the-street rabies vaccination (950 dogs in one neighborhood this fall), as well as spaying and neutering campaigns. By contrast, a couple of decades ago, the government conducted dog-poisoning campaigns, once killing 10,000 in one go. But this effort did little to stop rabies. New packs of strays moved in to fill the void.

Injured animals are treated at the center, then vaccinated and neutered or spayed before being released. About five to seven dogs a month, usually puppies, are adopted. A constant struggle for donations has meant discontinuing distemper and parovirus shots.

Indeed, resources are scarce. For the past three months, KAT has had an American veterinary volunteer from San Antonio, Texas. "In the U.S. I do so many tests and X-rays for every trauma case," said Dr. Rajeesh Banga. "But there is no X-ray machine. You have to rely on your knowledge and your experience. " 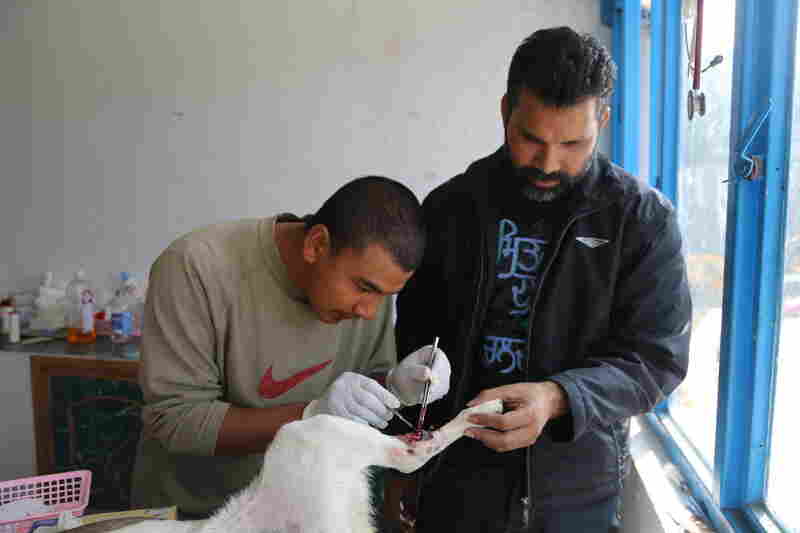 A canine patient with an infected leg wound is treated by one of the center's vets, Dr. Bidur Piya (left), and Dr. Rajeesh Banga, a volunteer from Texas. Donatella Lorch for NPR hide caption 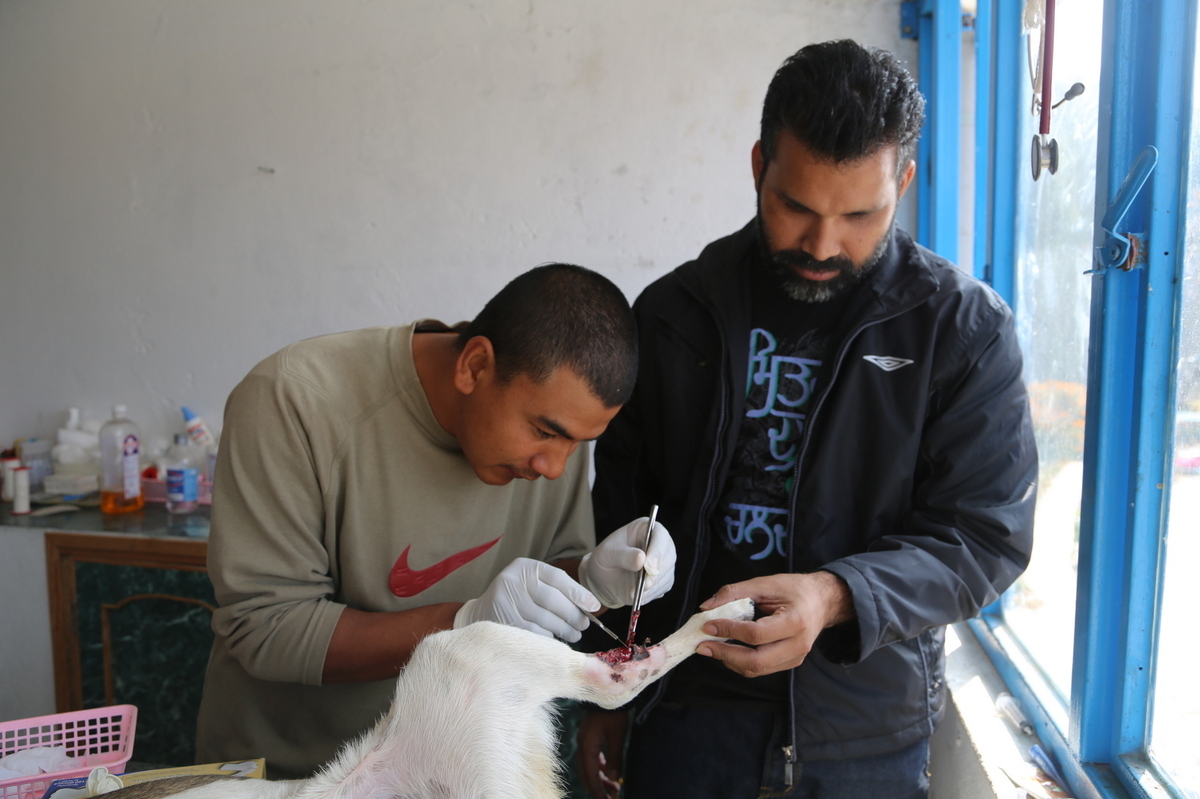 A canine patient with an infected leg wound is treated by one of the center's vets, Dr. Bidur Piya (left), and Dr. Rajeesh Banga, a volunteer from Texas.

Dogs are everywhere in the compound. They sleep in the driveway or curled up in baskets, in stairwells, in the room with the overfull, chugging washing machine. Or they may be recovering from sterilization in kennels. Some, like a blond short-haired male who lost a leg in a car accident, are too weak to return to street life and become permanent residents.

There are visible signs that KAT has made inroads. More Nepalis are adopting dogs — and making emergency calls about dogs in distress.

After the temple pick-up, Ram was called to fetch another dog with leg injuries. Everyone at KAT multitasks. Ram joined the center nine years ago as a part-time kennel builder. Since then, he has learned English and assumed all sorts of responsibilities, including operating room assistant. When Ram is not driving, he assists Dr. Bidur Piya, a 32-year-old vet, in the triage room.

They muzzled the injured dog picked up near the hospital and Piya stroked him as Ram shaved the fur around the leg wound. Once the patient was anesthetized, Piya cut out the damaged tissue, disinfected the wound with honey and bandaged it up. The dog will be neutered and then should be back on the street in another month.