Accessibility links
Ebola Cases Are Down, So Should Liberians Stop Worrying? : Goats and Soda The country is now reporting fewer than 100 new cases each week. But the CDC's chief there says Liberia must stay alert and not allow the presence of Ebola to become a new norm. 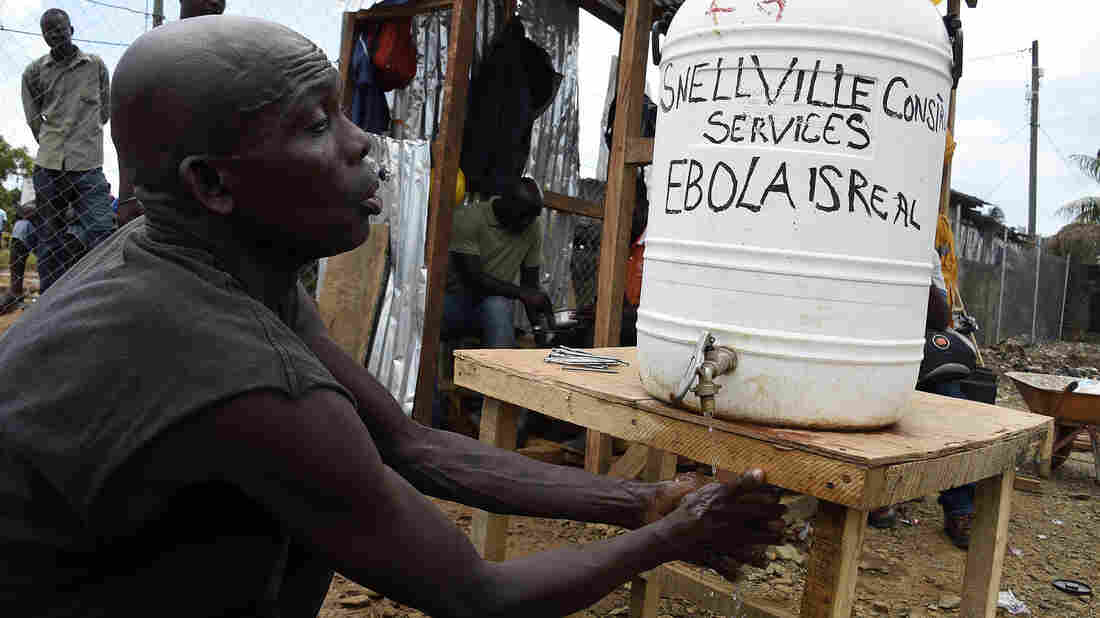 To ward off Ebola, a worker washes his hands at a construction site in Monrovia. Pascal Guyot /AFP/Getty Images hide caption 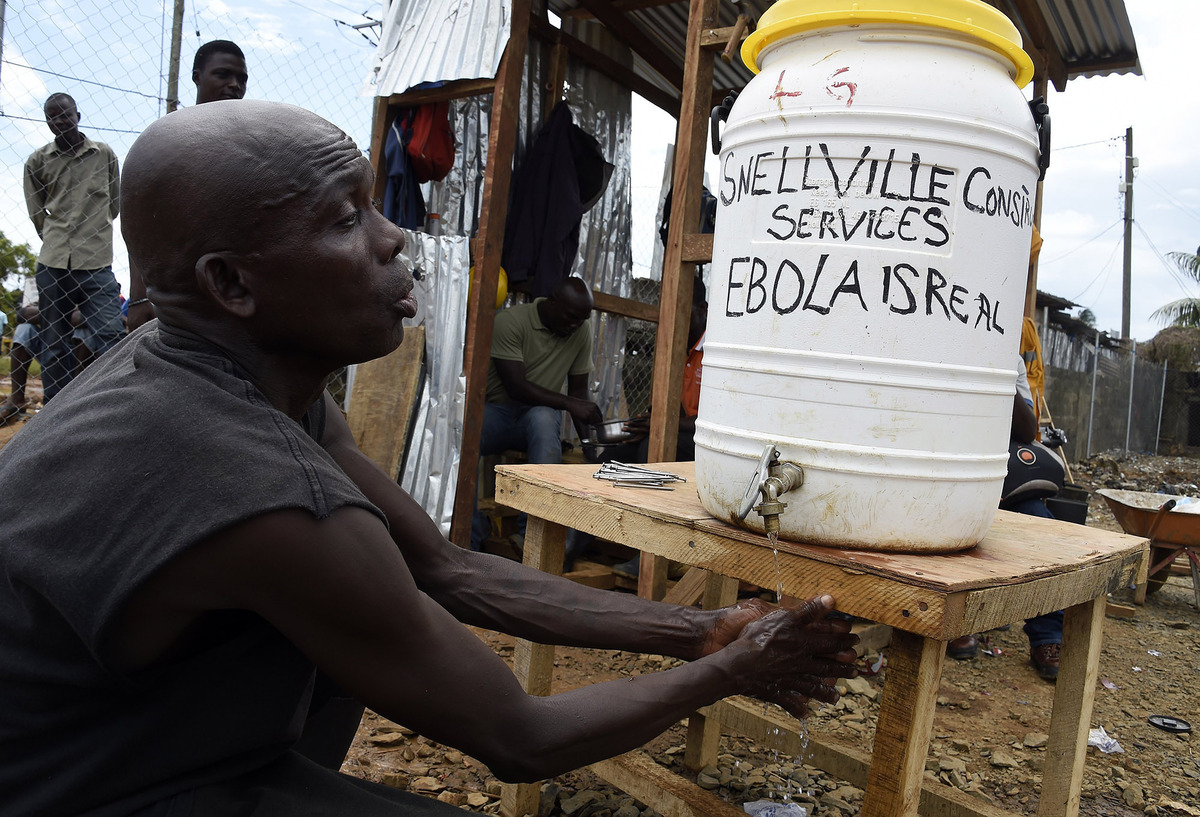 To ward off Ebola, a worker washes his hands at a construction site in Monrovia.

For months, Liberia was the country worst-hit by the Ebola outbreak. But the wards in Liberia's Ebola treatment units now stand virtually empty. The number of newly reported cases fell from almost 300 cases a week in mid-September to fewer than 100 by mid-October.

But that doesn't mean it's time to take it easy. In fact, Liberian President Ellen Johnson-Sirleaf has just announced a new campaign, Ebola Must Go, which focuses on the role of the community.

Liberia still records 12 new cases each day, says Kevin De Cock, the doctor leading the Centers for Disease Control and Prevention's Ebola effort in Liberia. At least half are in the capital Monrovia, a city of more than 1 million. There are also pockets of the virus in the countryside.

"We cannot rest until Ebola is eliminated," De Cock says. "Great progress has been made, but elimination of the disease is not yet in sight."

De Cock spoke with NPR about what still needs to be done. The interview has been edited for length and clarity.

Liberians seem to have a growing sense of optimism. What about you?

There's a great danger of complacency and accepting this [disease] as the new normal when, in fact, we are now at the same stage [in intensity of the outbreak] we were in late June, early July. Just a year ago, this situation would have been completely unthinkable.

What do you mean by complacency?

Well, one of the effects of this epidemic has been that it's transformed the way the world thinks about Ebola. We've always considered this an important infection, but a kind of isolated and exotic one. It was something one read about in tropical medicine textbooks.

All of a sudden this disease [is] being discussed at the highest levels of international and U.S. governments, on the floor of the United Nations, at the Security Council. Really, it's a crisis in global health.

And yet ... there's a danger that when the epidemic becomes more invisible again, this [continual presence of Ebola] becomes accepted as the new normal. We cannot allow that to happen.

How worrisome are the pockets of transmission in rural areas?

What we're seeing are clusters erupting in different counties, somewhat unpredictably. About a third to a half [are] apparently initiated by somebody from Monrovia, having traveled — and then locally spread.

The country, with all of the international [agencies and organizations], is getting better at responding to these clusters, but they're all their own mini-outbreaks and each of them needs to be addressed and extinguished. And this is continuing to happen. So this is an ongoing epidemic.

How realistic is Liberian President Ellen Johnson-Sirleaf's target of no new Ebola cases by Christmas?

It's an aspirational target, and such aspirations are to be encouraged and supported. We follow the data, [which] show that there is substantial transmission of Ebola still ongoing. And Christmas is pretty near, but we'll see what happens.

The state of emergency has been lifted. There's discussion of reopening schools. All this is very positive, but one has to balance that with a false sense of security that this is all over. And it's not over.

The president's new initiative, Ebola Must Go, shifts the focus from building Ebola treatment units to mobilizing the community. Is this the right time for such a change?

It's a balance now between continuing to address the acuteness of the situation [and] the longer-term commitment as the health system reopens. Hospitals begin to focus on the problems that have been neglected in these last few months — you know, maternal health, tuberculosis, HIV/AIDS, malaria, etc.

I think what the president is aiming at is that [the community] has to want a society that is free of Ebola. That it's not just a job for the Ministry of Health or the government or the external partners — communities have to be involved.

I personally believe communities have played a substantial role in the impressive decline in the epidemic, particularly in Lofa County [northeast, near the Guinea border]. We need that across the whole region. It's encouraging that the president is committed to this and is really trying to mobilize the people.

What's been different about the Liberian response vs. the response in Sierra Leone, where cases are still rising?

That's an interesting question because there was this perception that something special happened in Liberia. [The answer is] yes and no.

Liberia did what we know needs to be done, which is you isolate the sick, you provide best treatment and safely bury the dead. You protect health care workers, base your response on data and do contact tracing. In some parts of the country, communities played an active role, particularly rural areas. So there's nothing special.

And yet on the other hand, the fact that they did it in a country that is among the 10 poorest in the world is encouraging and impressive.

I think in Sierra Leone, they're very reassured to hear that they're doing the right things but they accept that there needs to be increased intensity. And what I think has happened in Freetown [the capital] perhaps is that there's been somewhat of a slowness in isolating the sick [and] waiting for the right facilities to be in place when actually you can't wait. You have to use what you've got to do the best you can.

Press on. We need to continue with a vigorous response based on addressing Ebola as we know how to do it — with case finding, isolation of the sick, treatment and care of the sick and, very, very importantly at this stage, contact tracing. And, as the health care system reopens, protection of health care workers.