Accessibility links
Medical Workers In Conflict Zones Have Never Faced Greater Risks : Goats and Soda They've always been caught in crossfire. But now they are being singled out as targets. And the worst violence is taking place in Syria. 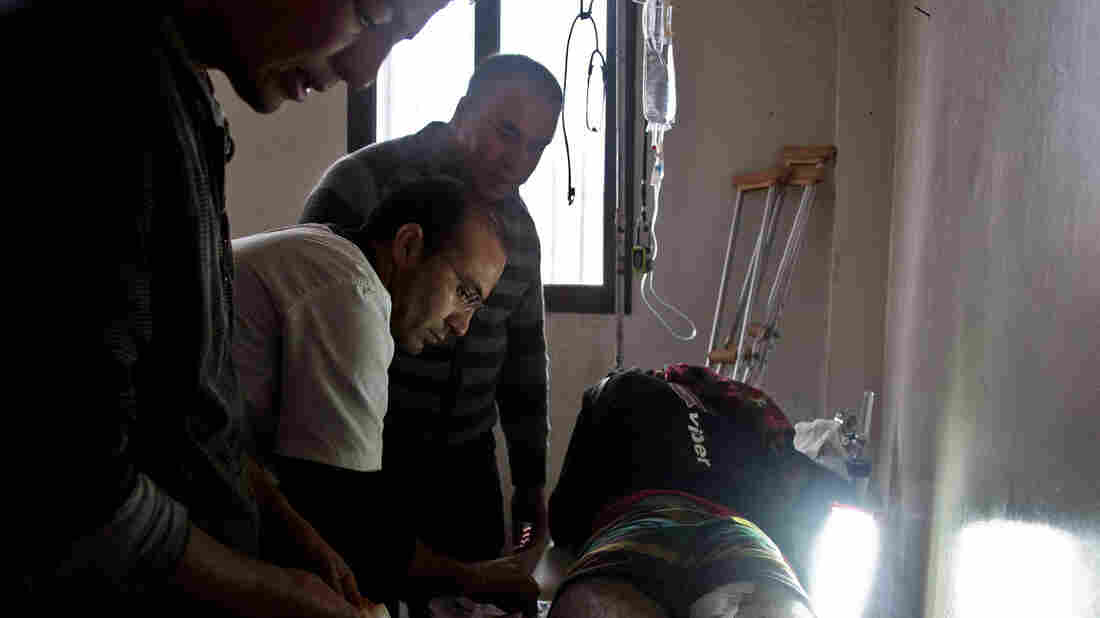 Dr. Mohammed Arif helps treat a wounded patient at a field hospital in Kobani, Syria. Most of the clinics in this besieged Syrian border town are now in ruins. Only one still stands, its location kept secret lest it be targeted. Jake Simkin/AP hide caption 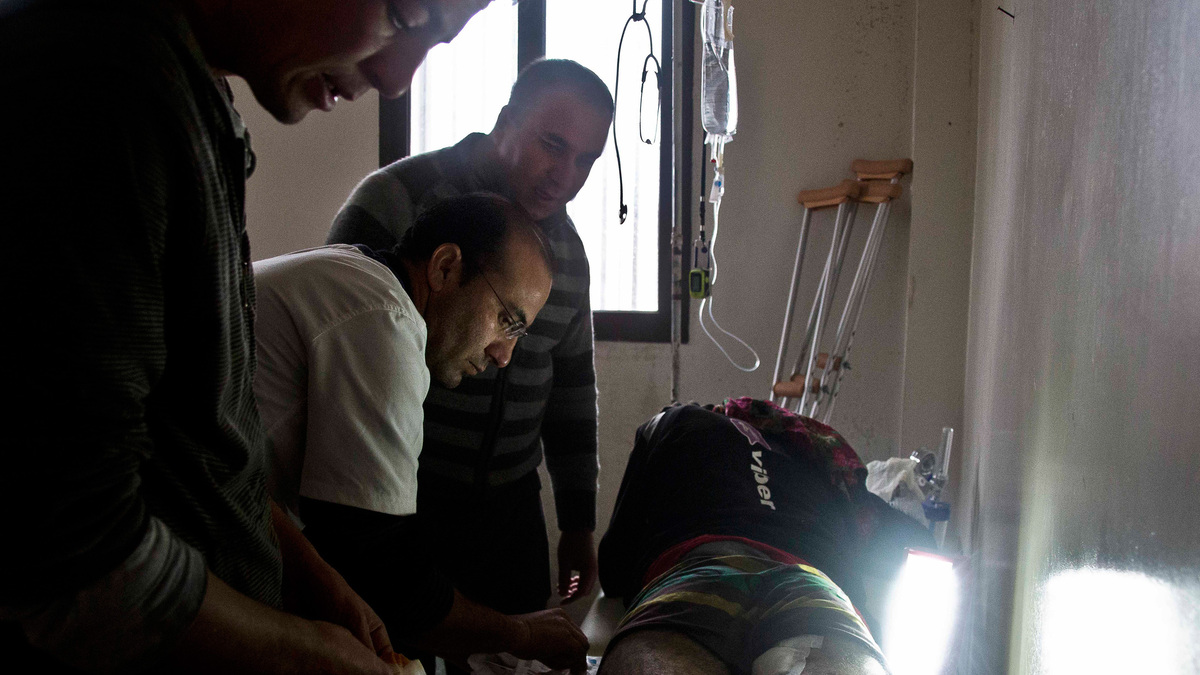 Dr. Mohammed Arif helps treat a wounded patient at a field hospital in Kobani, Syria. Most of the clinics in this besieged Syrian border town are now in ruins. Only one still stands, its location kept secret lest it be targeted.

Last month, American aid worker Peter Kassig was executed in Syria by the Islamic State militant group. The 26-year-old emergency medical technician had worked in hospitals, clinics and refugee camps throughout the region for more than two years. He was known for treating anyone who needed him, regardless of political affiliation. In a country like Syria, that kind of openness is both a statement of integrity and a huge personal risk.

Kassig's death is part of an alarming trend. Although health care workers have been caught in the crossfire for decades, they're now being directly targeted. And threats are at an all-time high. Since 2012, there have been 2,300 incidents of violence or threats of violence reported to the International Federation of the Red Cross (IFRC), though the IFRC suspects that many more go unreported. This week, the United Nations passed a resolution that recognizes this danger and strengthens existing international laws that protect health care workers in conflict zones.

International humanitarian workers and local health care providers are "literally being hunted down," Bruce Eshaya-Chauvin, medical adviser to the IFRC, said in a 2013 speech in London. Medical professionals face torture, abuse and kidnapping as they offer emergency medical care to the sick and wounded, along with some semblance of primary care for chronic and treatable conditions.

"We have seen targeted bombing and killing of health workers and willful destruction of ambulances and hospitals," says Susannah Sirkin, the director for international policy at Physicians for Human Rights. "In the last few years, we have noticed an almost extreme flouting of norms and laws that exist to protect the safety of health care workers."

In Bahrain, for example, doctors who came to the aid of injured protesters during the Arab Spring of 2011 were kidnapped from their homes, detained with no promise of release and labeled terrorists. While in custody, they were tortured, beaten and threatened with rape and death.

This isn't a rare occurrence. Earlier this year, Fallujah General Hospital in Iraq was repeatedly shelled and bombed, allegedly by the government of Iraq. In Pakistan, since December 2012, 80 polio vaccinators have been killed by militant groups. In the Central African Republic, 42 percent of hospitals have been damaged by fighting and 80 percent of the country's medical workers have left their jobs.

And then there is Syria: "We have never seen anything like what we are seeing in Syria," says Leonard Rubenstein, chairman of the Safeguarding Health in Conflict coalition, an organization that works to protect health care workers in conflict zones. "They are doing everything they can to kill every health worker, to bomb every medical facility, to send snipers after health workers. There is something uniquely horrific happening there. It is on a different scale than anything we've seen before."

In Syria, "having a medical kit visible on your car seat can be more dangerous than having a Kalashnikov," Eshaya-Chauvin told a panel in Washington, D.C. last month.

This targeting of health care workers reflects the changing nature of warfare. Increasingly, guerrilla groups and civilian militias are starting wars. So instead of army vs. army, "the new conduct of war is to remove whole communities and all the civilian institutions that go with that," says Sirkin. In Syria, in Iraqi territories controlled by the self-declared Islamic State and in the Central African Republic, wars are won when there is no one left to fight back. Wiping out health care facilities (and staff) is a key step to disabling a community, and the last straw for one that's barely holding on.

While local health workers are the typical victims, there has also been an increase in violence against international health workers volunteering with humanitarian groups like Doctors Without Borders. And that's a major change. During past conflicts, says Jeremy Konydyk, the director of U.S. foreign disaster assistance for the Department of Aid and International Development (USAID), nongovernmental organizations have been able to work safely in conflict zones because they offer food support and medical services. Even militant groups "want to maintain local support and respect, and if they cut off aid, that harms their reputation. That dynamic gives humanitarian groups leverage to do the work they need to do, by their rules."

But in many places, that's no longer a concern of rebel groups or governments, says Konydyk. And when a group like ISIS does not show concern for the local community, there is no motivation to let humanitarian groups work. Aid groups either pull out or risk the lives of their staff on the ground.

Humanitarian groups often find a way to keep doing good without leaving the area completely. In Syria, where Western aid is coming under tighter scrutiny, many groups are setting up shop in Jordan or Turkey. Or they run medical clinics in refugee camps. Still, they risk their lives to continue this work.

"Every day, we hear stories of unbelievable courage and heroism of those who have remained despite shelling and bombing, risking their lives every day to carry out their duties," says Sirkin. "But when civilian life becomes impossible, those who have the means will leave." And that takes a toll on a country's health care system.

But access to a health care a basic human right. That's why it is protected under the Geneva Conventions, which says that attacks on health care workers and medical facilities violate international law. But there has only been one prosecution, after Serbian forces removed 200 people sheltering in a hospital and shot them in 1991.

The U.N. measure that passed on Monday was a response to the ramped-up attacks on health workers. It moves such crimes into the arena of human rights violations, not just violations of armed conflict.

"We need to strengthen the mechanisms within the U.N. to respond more forcefully," says Sirkin. "The more these attacks are seen as very serious violations of human rights, if not war crimes which many times they are, the more health workers will be able to trust in the law."

Strengthening international law, increasing security training and helping health care workers lead safe lives while treating patients can perhaps ease the fear and keep more on the job. But as long as providing health care to all is seen as aiding the enemy, health workers will be in danger.

In an interview with Safeguarding Health in Conflict, a nurse in the Democratic Republic of the Congo said, "Last month, our clinic was raided and I was tortured. I was scared, anxious but also angry. We are trying to save lives, and they are trying to kill us."