Accessibility links
Pakistan Keeps On Vaccinating Despite Tough Terrain And Terror Threat : Goats and Soda Just getting a measles vaccine to a child in Pakistan was once an impossible dream. Despite many obstacles, health workers have made great progress in stopping infectious diseases.

Pakistan Keeps On Vaccinating Despite Tough Terrain And Terror Threat

Pakistan Keeps On Vaccinating Despite Tough Terrain And Terror Threat 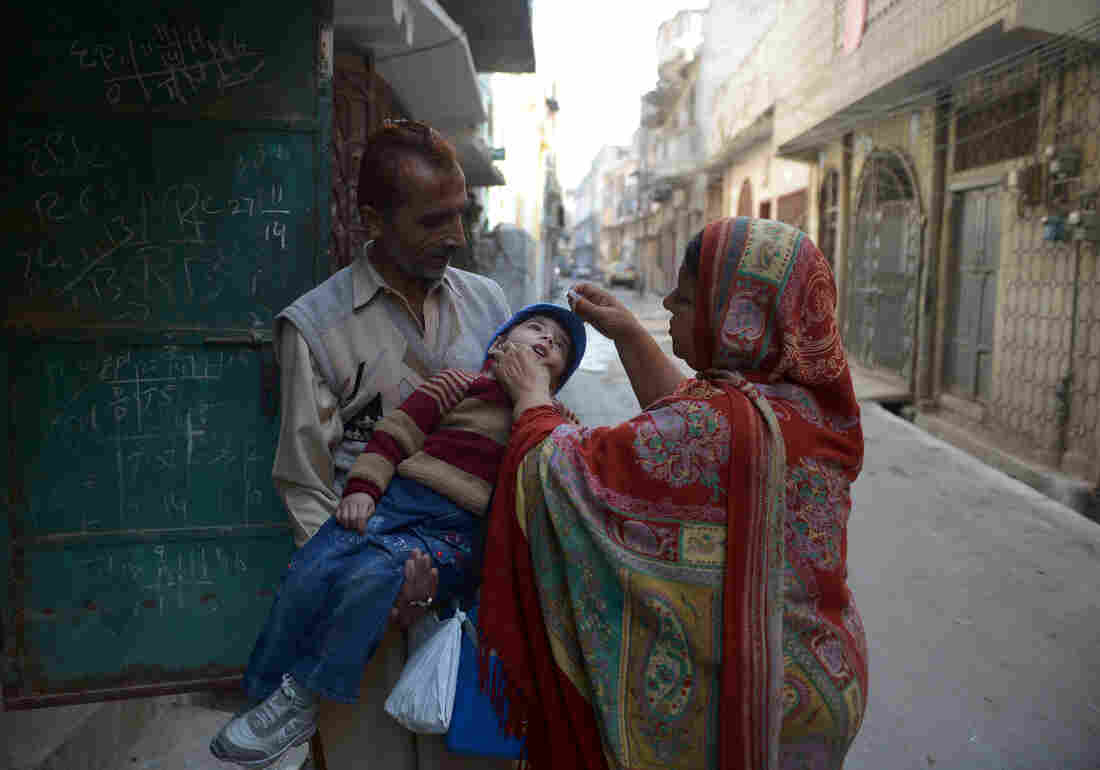 A Pakistani health worker administers a polio vaccine to a child during a campaign in the northern city of Rawalpindi. FAROOQ NAEEM/AFP/Getty Images hide caption 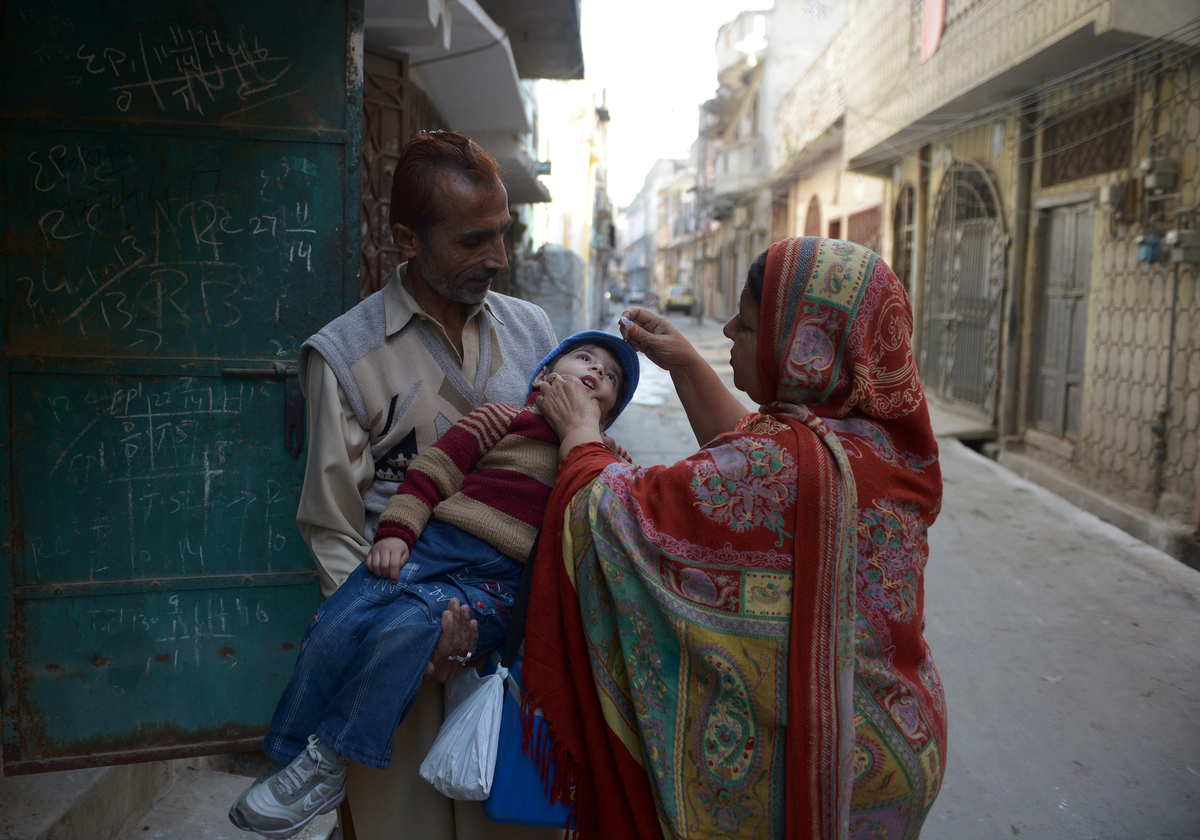 A Pakistani health worker administers a polio vaccine to a child during a campaign in the northern city of Rawalpindi.

Between the rugged terrain and the constant terrorist threats, vaccinating Pakistani children against common diseases hasn't been easy. Mountains make it hard — at times even impossible — for vaccinators to reach people in the north. In the south, health workers have to use four-wheelers and camels to travel through Pakistan's harsh deserts.

The Taliban also stands in the way. Since 2012, the Taliban has gunned down at least 60 health workers and policemen who were guarding them. The attack this week on a school in Peshawar that killed at least 140 children and teachers is a reminder how the group can wreak havoc with the country's sense of security.

The Hidden Costs Of Fighting Polio In Pakistan

Still, Pakistan has been making strides in vaccinating children. In 2013, the country saw between 60 and 85 percent immunization coverage against diseases like measles, tuberculosis, polio and meningitis. In 1980, the rate was almost zero.

"We've seen the death of children occurring even 10 years ago cut down by half because of the vaccines," says Dr. Dure Akram, a retired professor of pediatrics at Dow Medical University in the Pakistani city of Karachi. Akram, 66, now serves as the honorary chairman of Health Education and Literacy Program, a nongovernmental organization providing primary health care in Karachi.

Akram stopped by NPR to talk about the successes — and challenges — of routine immunization programs in Pakistan.

Will the recent Taliban attack on a school in Peshawar have any effect on the immunization program?

I do not think that this would affect the routine immunization or the polio campaign because we understand that this is retaliation by the Taliban against the army. I hope that it would not in any way compromise the routine the immunization activities going on there.

But in the past the Taliban has made it impossible for health care workers to carry out regular immunization drives. In places such as North Waziristan for instance. Is that still a problem?

That is a very difficult area. Since June of 2012 nobody was allowed to get in there to give vaccination. So that area became a pocket of disease and illnesses of children that could have been easily prevented. This was a political move on part of the Taliban. Presently in the last 6 months, the military has opened it up [and allowed vaccinators in to Taliban controlled areas], But there are still pockets where [the military has] not reached.

Over time, how have vaccines changed Pakistan?

Let me give you a bit of historical perspective. When I was growing up, we just had the smallpox vaccine. Sometimes when there were epidemics of typhoid, there was a typhoid vaccine. Other than that we grew up totally exposed to common childhood infections. So we did not even dream that one day our children would be protected against common infections [like] pneumonia, diarrhea and measles. With GAVI's (The Global Alliance for Vaccines and Immunisations) help, our immunization program got accelerated and we could procure vaccines that were not accessible because of the price.

During my lifetime as a teacher, I saw diseases disappear. I saw outbreaks of measles disappear. I have seen isolation wards where we used to keep cases of tetanus closing down. A couple weeks ago, I was visiting my old hospital where I used to teach and we were taking rounds in the ward. The professor there — who used to be my student — asked me to look into a case that she thought may be diphtheria. She said, "I have not seen diphtheria in my life." But I had [seen it] growing up. So this is a very visible impact of the vaccines.

Which vaccine would you say had the greatest impact in Pakistan?

What are the challenges of vaccinating children in Pakistan?

We have a population that is scattered, they're in areas where there are no roads, especially in the deserts and mountains. We have a poverty level [of] 45 to 50 percent, and they do not have easy access to health care facilities. In addition, we've had disasters: the earthquake in 2005 [and] the floods in 2010 and 2011, which displaced over a million people [and] caused epidemics of diarrhea, pneumonia and various infections. Then we have manmade disasters like terrorism, which plagues us almost every week. We're always in fear as to where it's going to hit us next.

It seems like health problems in Pakistan are intertwined with insecurity. For instance, the places in Pakistan's largest city, Karachi, where you still have major disease outbreaks are often the same places that are insecure.

You're right. In cities like Peshawar — a bustling metropolis — and in Karachi, which is the industrial hub, there are pockets where even now we cannot go to immunize or to give health care because of the fear of insurgents attacking us. But that does not apply to the major part of the country; it applies to isolated pockets in the north of Pakistan and in Karachi.