Accessibility links
The Khoisan Once Were Kings Of The Planet. What Happened? : Goats and Soda In the landscape of modern Africa, they are a link to the long-ago past. They know everything about plants and animals. But their way of life — and language of clicks — may be doomed.

The Khoisan Once Were Kings Of The Planet. What Happened?

The Khoisan Once Were Kings Of The Planet. What Happened? 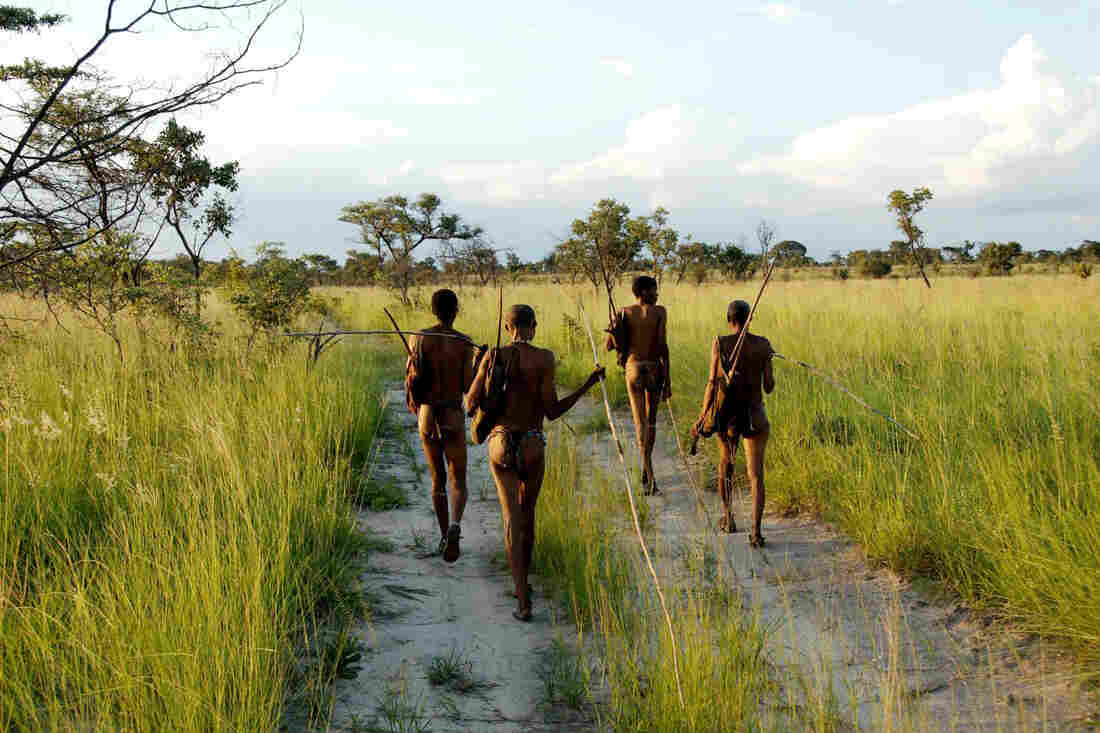 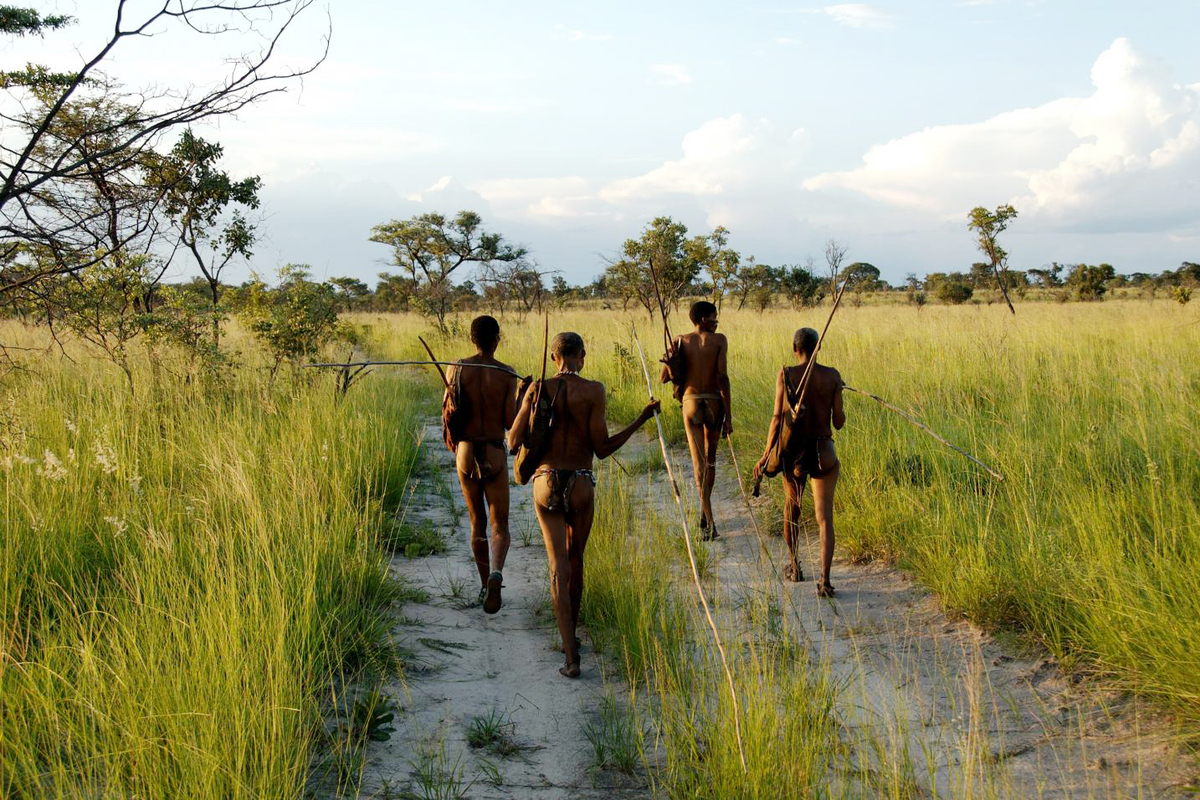 In Namibia today, members of the ancient tribe of hunter-gatherers still forage. New genetic research reveals they were once the largest group of humans.

Some 22,000 years ago, they were the largest group of humans on earth: the Khoisan, a tribe of hunter-gatherers in southern Africa.

Today, only about 100,000 Khoisan, who are also known as Bushmen, remain. Stephan C. Schuster, professor at Nanyang Technological University in Singapore, has published new research about the tribe, many of whom now live in poverty, their cultural traditions endangered. We spoke to Schuster about his study and the lives of the Khoisan.

How did it happen that a group that was once in the majority is now so small?

First of all, the fact that 7 billion people now live on earth makes it almost impossible for us to understand how few people lived in the past. About 10,000 years ago, there were not more than 1 million on the planet. And 100,000 years ago, only a few 10,000s. The whole genome sequences we analyzed show that there was a time when the non-Khoisan peoples were not doing as well as the Khoisans.

What happened to tip the balance?

Changes in the climate. Before 22,000 years ago, the southern part of Africa where the Khoisan lived was wetter, with more precipitation, compared to the dryer western and central parts of the continent where other groups lived. A dryer climate meant fewer wild game and less food, which translates into fewer children. So other populations dropped significantly while the Khosian's population stayed about the same. But after the last ice age ended, the climate changed, and for reasons we don't understand the other African populations expanded, and the exponential growth of humans across the earth began. 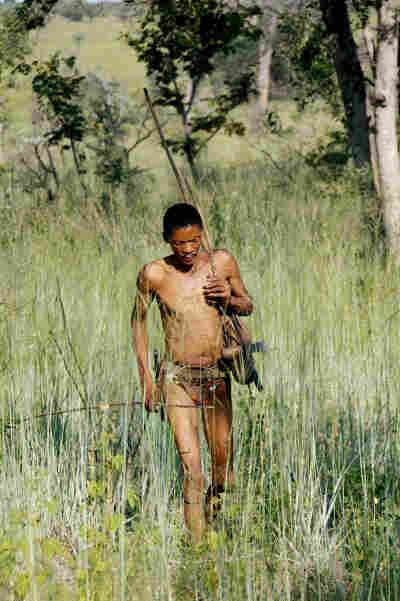 The Bushmen know which plants and herbs are good to eat — and which will heal their ailments. Stephan C. Schuster/Penn State University hide caption

How do the Khoisan maintain their way of living today?

The answer is they don't. We are seeing the end of their culture and their hunter-gatherer lifestyle, which is being replaced by herding and agriculture.

In Botswana, there is a law that the hunter-gatherers cannot hunt anymore. There are land disputes and in many cases they are being pushed off the land they used to hunt or consider sacred. They are considered lowlifes in society and have very little political representation. In many ways this replicates what happened to the indigenous people of North America, who by the way were also hunter gatherers.

Can you describe the Bushmen culture and what is being lost?

The most important thing is the language. This is a "click language" in which clicks are like consonants. Linguists believe that the more clicks you have the older the language is, and this one has five, the most of any. There is also beautiful traditional music and singing that will be lost.

What about other skills and types of knowledge particular to the Khoisan?

They have incredible knowledge about animal behavior and about the environment. Where you and I would only see plants and scrub and thorn and dry wood, they see a lot of things you can eat. If you walk with a Bushman in the bush, he is constantly eating because he always finds something to nibble or chew on, and of course this is precious knowledge that we don't have. This is also their pharmacy, the herbs or the natural substances within the plants that will help them when they have ailments. Even the elders have absolutely pristine hearing and clear vision. And I think it is understandable if your life depends on your hunting skills.

Can you talk about how they hunt?

They use a very small bow and very short arrow, which they make, and on the tip of the arrow they place a poison that they produce from caterpillars. They are also amazing masters of trapping. They make the traps not with metal or rope but only with natural materials like branches and grass and leaves. All this knowledge will be lost if the younger generation does not get the chance to live this lifestyle. It might already be too late.

What lesson should we take from the population patterns you've traced?

The most important factor for changes in the population is the climate. The key thing we want people to know is that there were times when there were so few humans, we got close to being wiped out. This is also the pattern we see in endangered species today. We look at ourselves as invulnerable, but we should not take for granted that the climate won't change in the future in ways that will endanger us. We need to take climate seriously.