Accessibility links
China's Villages Are Dying. A New Film Asks If They Can Be Saved : Goats and Soda Down to the Countryside follows an artist as he moves from bustling Beijing to the fading village of Bishan. He hopes to revitalize rural life as part of China's growing "back-to-the-land" movement.

He had a comfortable life in Beijing where he worked as an artist. Yet in 2013, the 45-year-old packed his bags and traded his apartment for a centuries-old house in Bishan, a small village in China's Huizhou region. He brought with him his mother, younger brother, nephew, his then-fiancé and her son.

Ou Ning is the subject of the documentary Down to the Countryside by filmmakers Sun Yunfan and Leah Thompson, who received support from the Pulitzer Center on Crisis Reporting. The 12-minute film follows the artist-turned-activist as he tries to bring economic and cultural development to a village struggling to survive China's rapid urbanization. He's part of the emerging "back-to-the-land" movement in China.

The urban population in China has grown faster than any other country. Today 54 percent of China's population lives in cities, up from 42.5 percent in 2005. And villages are rapidly disappearing. In 2002, there were 3.6 million villages. In 2012, the number had dropped to 2.7 million, according to China's Ministry of Civil Affairs. The government is happy about the trend: Urbanization has always been at the center of the country's economic development agenda.

Citizens are reportedly happy too. For many, moving to cities — or having their children work and live in cities — is a sign of success. "We met some senior farmers — they're very ashamed of the fact that they are still farming," says Sun.

When Sun and Thompson walk you through Bishan in their film, young adults are noticeably missing. On screen, an elderly woman is all smiles as she counts off who's moved to cities: "The children of that [villager] live in Wuhu city. This one, Beijing. The son of this one works in the military in Beijing."

And when the children go home for the Chinese New Year, they tell the filmmakers they don't plan to return to the village for good. They complain of low salaries and a lack of opportunity to make use of their education.

But without young entrepreneurs, historical villages are struggling to survive. Some, whose ancient architecture is still intact, have become dependent on local tourism. Others, like Bishan, may soon disappear along with its aging population. 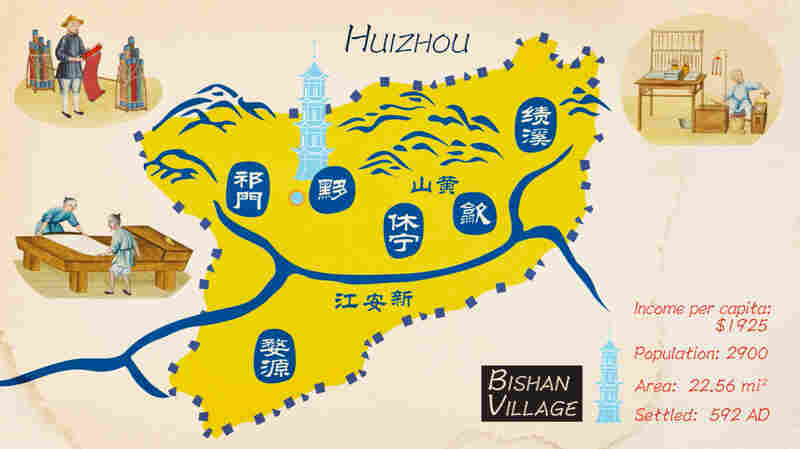 Bishan is located in Huizhou, a region that was prosperous during the Ming and Qing dynasties. Around the 1900s, war and revolution brought down its booming economy. Courtesy of Sun Yunfan hide caption 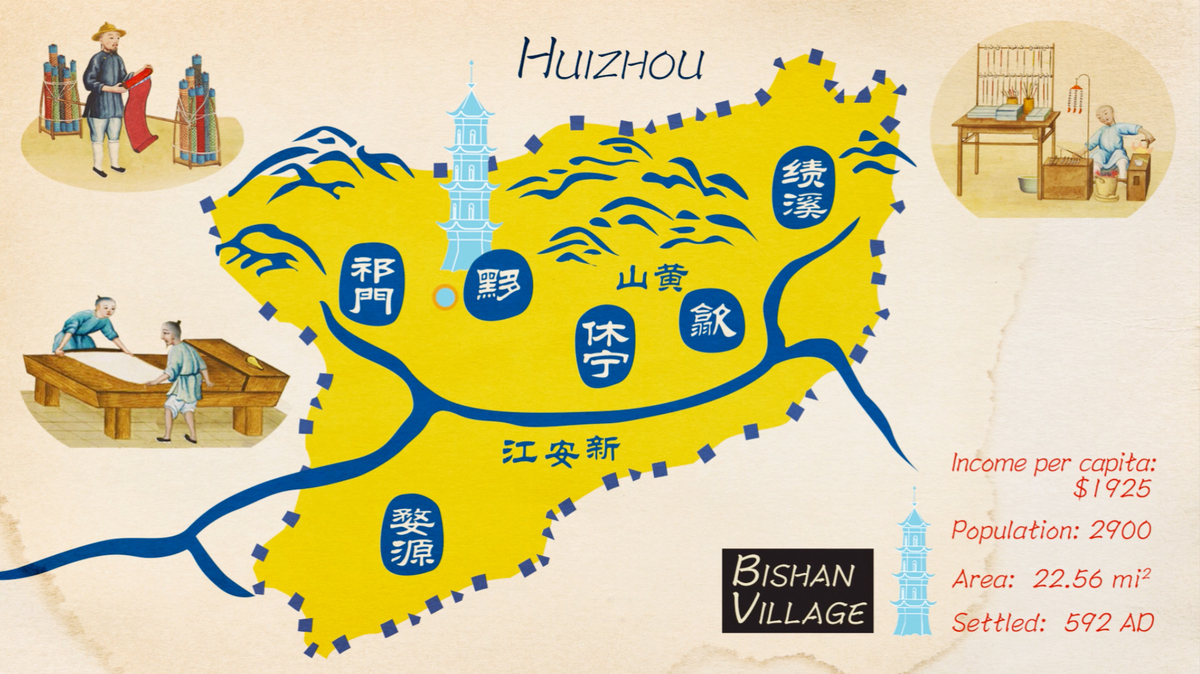 Bishan is located in Huizhou, a region that was prosperous during the Ming and Qing dynasties. Around the 1900s, war and revolution brought down its booming economy.

"In China, the ideology of urbanization is too dominant. Everyone believes a successful life can only happen in the city," Ou Ning says in the film. "As soon as the villagers have a little money, they buy an apartment in town. They think living in old houses is a sign of failure."

With the country caught up in moving into the cities, Ou Ning wanted to created a livelier community for the Bishan villagers. So in 2011, he and fellow artist Zuo Jing founded the Bishan Project in a bid to bring business and entertainment to the village and improve the financial outlook for villagers. For example, he convinced the owners of a bookstore from a nearby town to open a branch in Bishan. His wife now manages the bookstore, which has been attracting local tourist.

The project is part of China's growing "back-to-the-land" movement – or the New Rural Reconstruction Movement — in which entrepreneurs are trying to revitalize villages and create a sustainable life for those still living in them. The movement, which started around 2009, is small for now, with only 200 projects.

"It's a response to the impact of globalization on rural areas," says Thompson, associate director of the Center of U.S.-China Relations at Asia Society, an institution promoting cultural understanding between the U.S. and Asian countries. "What Ou Ning is trying to do is get people to look at life in the countryside and no longer see it as backwards."

Sun's interest in village revitalization began in 2008 when she went back to her hometown of Shenzhen for the first time in seven years. During the late '70s, Shenzhen was a fishing village of some 30,000 people. Then the government declared it a special economic zone, putting in policies that encouraged foreign investors to start businesses there. Today, the population has jumped to more than 10 million.

'A Universe Beneath Our Feet': Life In Beijing's Underground

"By the time I left in 2001, [Shenzhen] was already a megacity of 8 million people. I didn't expect that seven years later, a brand new megacity could have changed so dramatically again in such a short time," she says. "The high school I went to, my old apartment — everything was gone."

"All those things were brand new when I left," she adds, but demolished and replaced not long after.

But Sun says the movement hasn't been widely embraced; in fact, it's quite controversial in China. "Some urban elites see this movement as stopping progress," she tells Goats and Soda. Many, she says, think that preserving old villages is not a concern for a developing country like China.

Criticism has also flowed in from western nations, she adds, accusing Ou Ning of romanticizing rural life. Indeed, Yan Yunzhen, a researcher at University College London who has been studying the impact of the Bishan project, told the Guardian she feared Ou Ning's efforts may be "just another form of gentrification" and that he is inadvertently making the "real rural" disappear. For example, she noted, his projects to open businesses in Bishan — turning ancestral halls into bookstores and museums, and having a Shanghai couple open a high-end hotel — has led to a dramatic increase in housing prices.

Sun disagrees. "China's biggest problem in the countryside is depopulation, so [Ou Ning] definitely knows this is a huge challenge," she says.

The other big challenge is to change mindsets. Asked if there was any concern that no one from the next generation will live in Bishan, an elderly woman just laughs. "Is that the kind of thing I should worry about?"

As for Ou Ning and family, the experiment has had mixed results. His wife has been supportive of his move and is gradually adapting to rural life. But less than a year in, his mother and brother were ready to move back to Beijing.