Accessibility links
Education Plan: Sell Goat, Ride Bus 300 Miles, Sneak Into Prez's House : Goats and Soda Getting into high school was a long, strange journey for 11-year-old Ugandan orphan James Arinaitwe. It started when his grandmother sold the family goat to pay for shoes and a bus ticket. 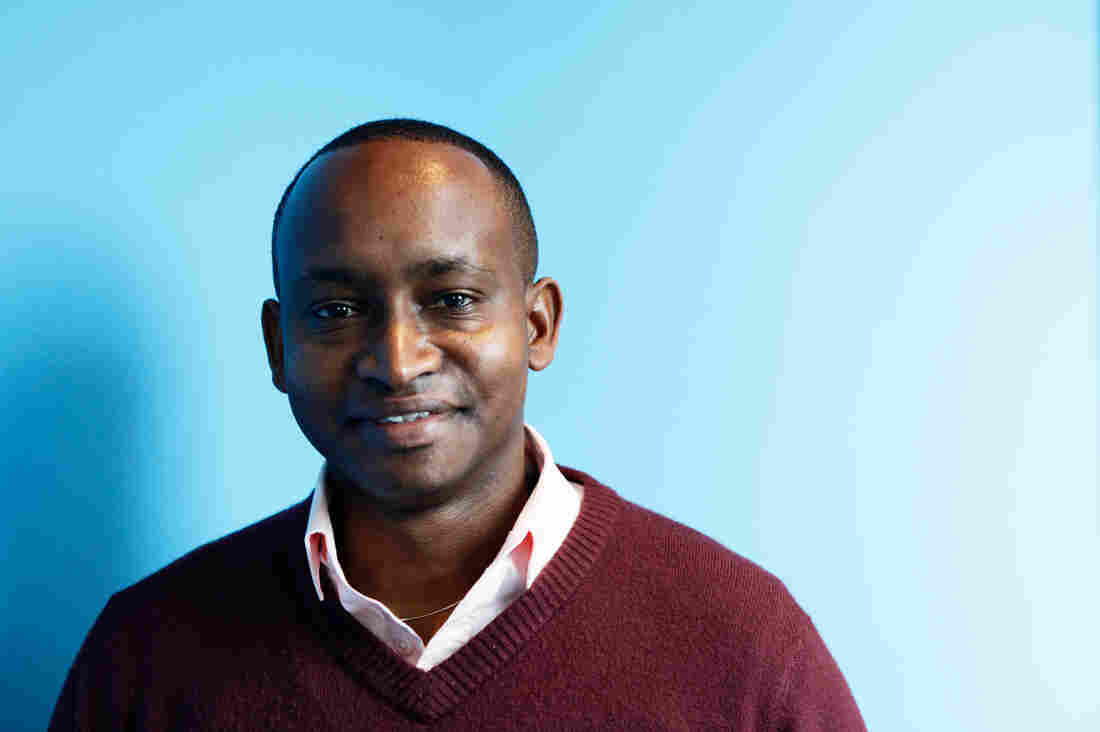 When he was 11 years old, James Arinaitwe boarded a bus with a crazy plan: Sneak into the president's house and beg for a high school scholarship. Claire Eggers/NPR hide caption 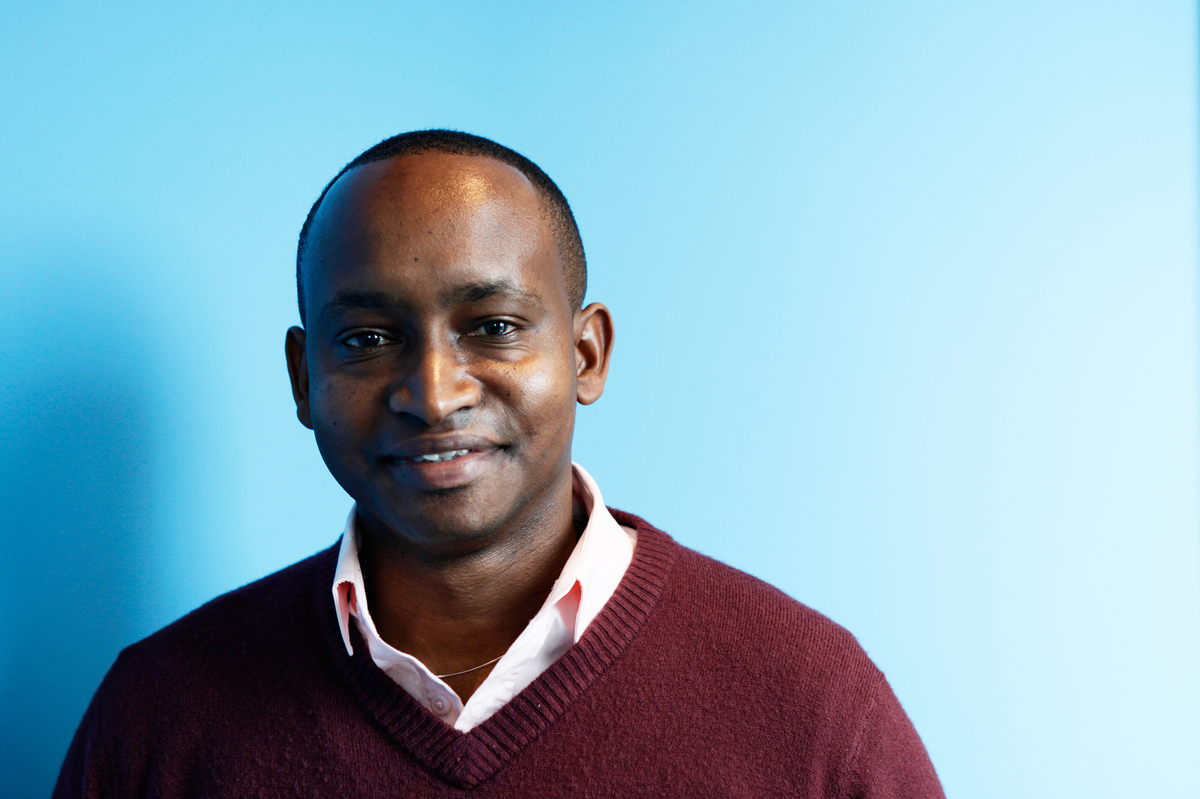 When he was 11 years old, James Arinaitwe boarded a bus with a crazy plan: Sneak into the president's house and beg for a high school scholarship.

What does it take to get a high school diploma? For James Kassaga Arinaitwe, it came down to a goat, a 300-mile journey and crashing the president's guarded house.

Arinaitwe, now 32 and a New Voices Fellow at the Aspen Institute, is the type of success story the organization wants to highlight. In Uganda, a country where stories about young people often touch on child soldiers, slavery, disease and poverty, he is someone who overcome tragedy and poverty.

"I lost my family in rural Uganda," he says, ticking off the list: "Three sisters to measles, my mom to cancer, my dad to AIDS, and one brother from a complication of malaria. I was the only survivor in my [immediate] family." He was 6 years old.

He did have a grandmother, who took him in and raised him after his mother's death. Together, they eked out a living from a few goats, cows and chickens.

Then came time to enroll in high school. In Uganda at the time, students had to pay about $130 in tuition per quarter. Income varies among Ugandans; in Arinaitwe's grandmother's village, take-home pay hovered around $200 a month. So while Arinaitwe may have had the best test scores in his grade, he and his grandmother, Aida Ruhindiya Kibaraho, did not have enough money to fund his secondary-school studies.

A member of his grandmother's church gave her an idea. This churchgoer had heard that Yoweri Museveni, president of Uganda then and now, helped youth in need. The catch? The president's family estate, Rwakitura, was a 300-mile journey by bus — daunting for anyone, much less an 11-year-old boy from a remote village who didn't even own a pair of shoes.

"Either drop out and be like the other kids or figure out a way to get there," Arinaitwe recalls his grandmother saying.

Crazy as it sounded, Arinaitwe saw no alternative. Within three weeks, his grandmother sold one of their precious goats, bought shoes and clothing ("When you meet the president, you can't go looking like a bum from the street!") and a ticket to a bus station close to Rawkitura.

"It was my first time on a bus that far out of my village," he says. "It was to a faraway place I'd never been.

"Of course, I was scared. The bus left at 5 a.m. My grandma kissed me goodbye and hugged me. She said, 'I have given you to God; He will take care of you.' And off I went."

The bus journey was just the first step. After a night sleeping on a mat at the home of a kindly tea shop owner, Arinaitwe walked another 15 miles across hills and forests to reach his aunt's home, where he'd live for the next three months as he figured out how to get into the president's house to appeal for help.

It wouldn't be easy. The house was guarded and gated. But rumor had it that sneaking through the fence wasn't impossible — and children who made it in were often able to meet the leader of Uganda.

Arinaitwe figured he'd need to make himself stand out if he did make it in. His grandmother had proposed bringing a china tea cup for the president's father, hoping the elderly man might become an advocate.

"This was a [Ugandan] tradition," Arinaitwe said. "When a young person visited an elder, you got them a gift. It was a way of showing that you are not just asking without offering something."

Armed with the tea cup, Arinaitwe set out to gate crash. His voice cracks as he tells how he sneaked through the gate, came face-to-face with the president's father and laid out his predicament.

After hearing his story, the older gentleman suggested that the boy see the first lady. Her secretary, a kindly woman who was impressed with the fidgety young boy's resolve, arranged for a meeting.

"She [the first lady] finally came out," Aritnaitwe remembers. "Her secretary rushed me to her with my school report cards in one hand and holding my hand in her other hand. I was overwhelmed. I tried to tell her my story and everything, but I broke down."

Arinaitwe's story of hardship and determination moved the first lady. She offered what Arinaitwe was dreaming of: financial help to pay for his high school education.

It was a wise investment. After high school, Arinaitwe went on to earn his bachelor's in 2009 in computational biology and a couple of master's degrees: in public health and policy from Florida State University and in sustainable development from Vermont's SIT Graduate Institute.

Arinaitwe spent some time with Educate! in Uganda as a school partnerships manager, working with foundations that could offer financial support for at-risk rural youth.

The young people of Uganda represent the future for Arinaitwe, and in them, he sees glimmers of his younger self — a boy with dreams who just needed an education to inch closer to a more secure economic future.

The Aspen Fellowship has created a new bevy of opportunities for Arinaitwe. Sponsored by the anti-poverty group Acumen, he's traveled to India — like Uganda, a country with an exploding youth population hungry for an education. He's learning how to work with nongovernmental organizations and schools to create opportunities for education. He hopes to bring these skills back to Uganda and continue to focus on the youth population, rural kids like him "with no shoes" but outsize dreams. And of course, spend some time with the person who helped his dreams come true — his now-92-year-old grandmother.