Accessibility links
Mexican Carpoolers: A Photographer's View Of Truck Bed Commuters : Goats and Soda In the backs of pickup trucks, construction workers lie among tools and blankets, headed to the city for a day's work. Alejandro Cartagena turned his camera on the carpoolers. 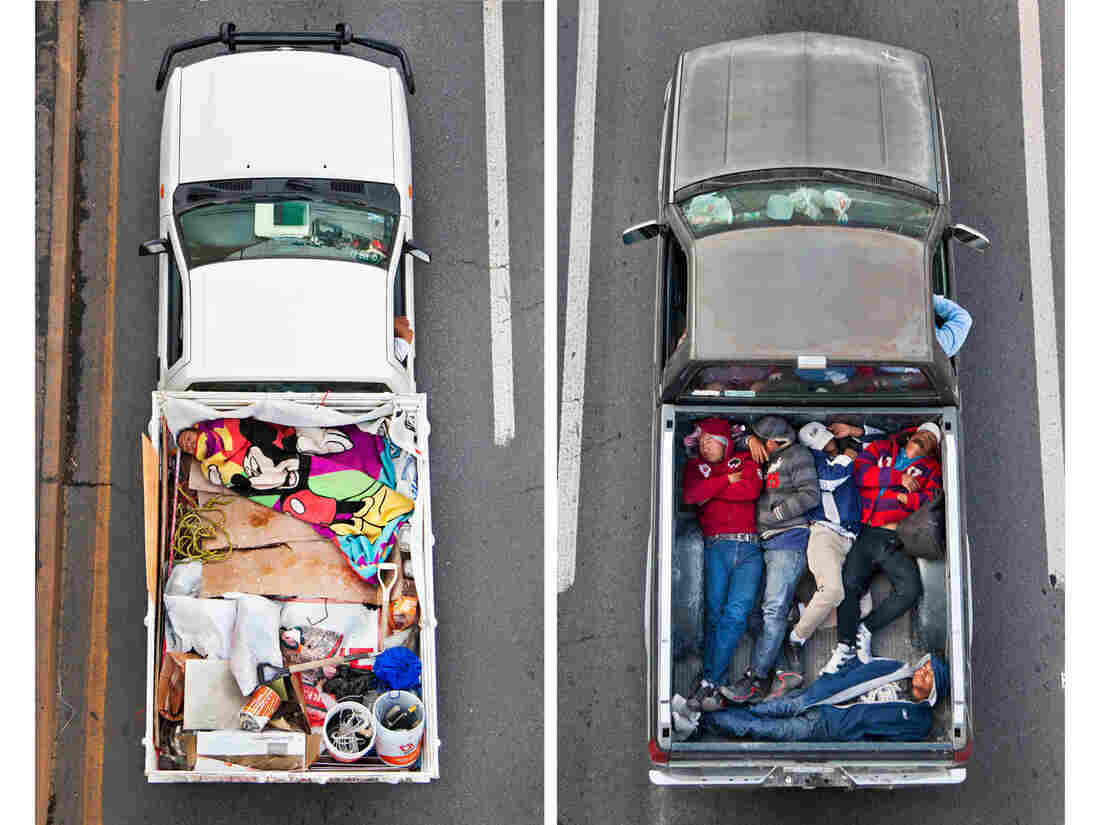 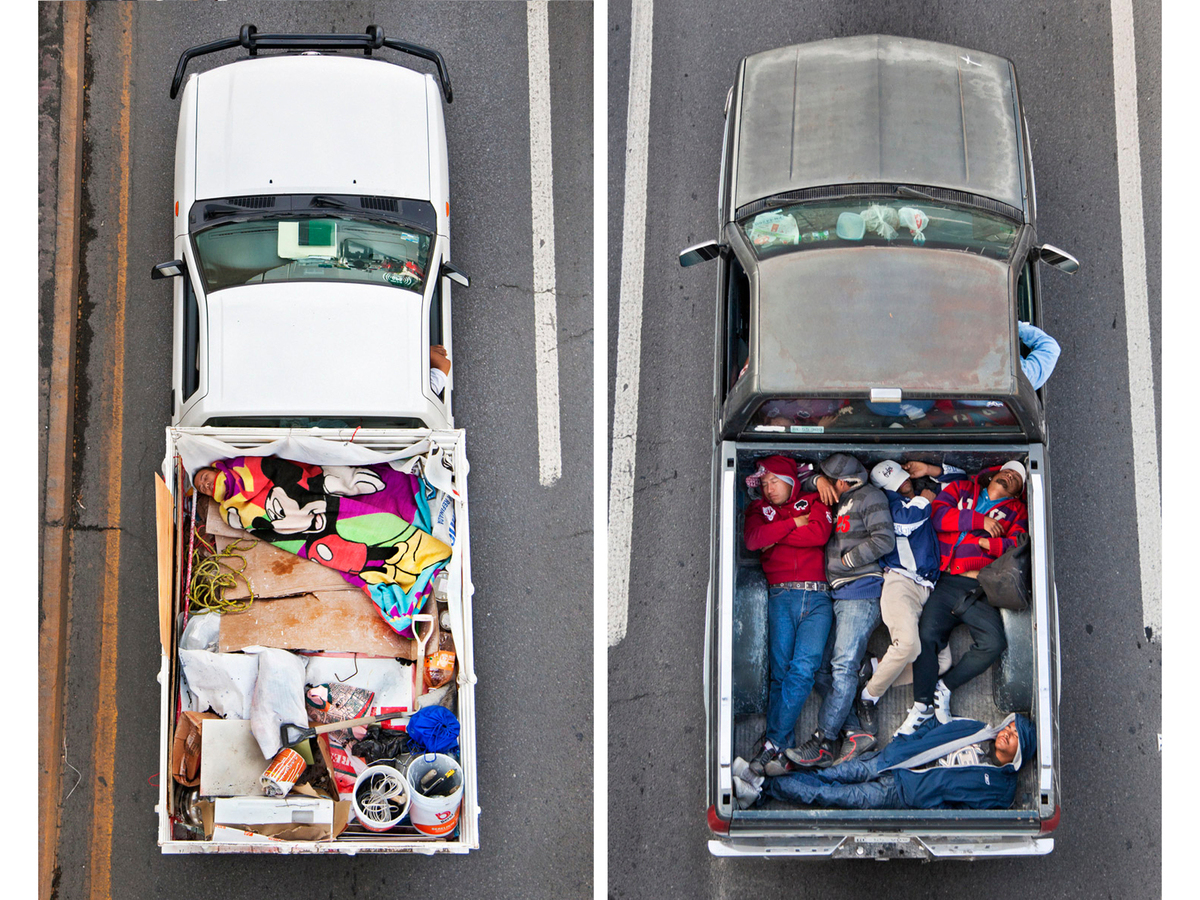 Every day, hundreds of workers in Mexico begin their days lying down in the back of pick-up trucks.

Alejandro Cartagena does not know much about the lives of these "Carpoolers," whom he photographed for a year starting in the winter of 2011, heading down Highway 85 off Monterrey. But he does know this: Every morning from about 7 to 9 a.m., groups of construction workers gather by a "maestro" (or head construction worker) before they hit the highway and head south toward San Pedro. They lay low in the truck's beds, surrounded by the tools of their trade, along with blankets and towels to make the ride more comfortable. The commute runs from 45 to 90 minutes, depending on traffic.

Cartagena has some experience with this kind of lifestyle. His grandfather was a "maestro" for 40 years in Mexico, his mother's homeland. Cartagena, who was born in the Dominican Republic but has lived in Monterrey since he was 13, would often go on family visits in the 1980s and ride with his grandfather to work.

In 2004, he left a career in restaurants and hotels to become a photographer. And in 2011 when he got the idea to photograph the workers. The only question was: How? 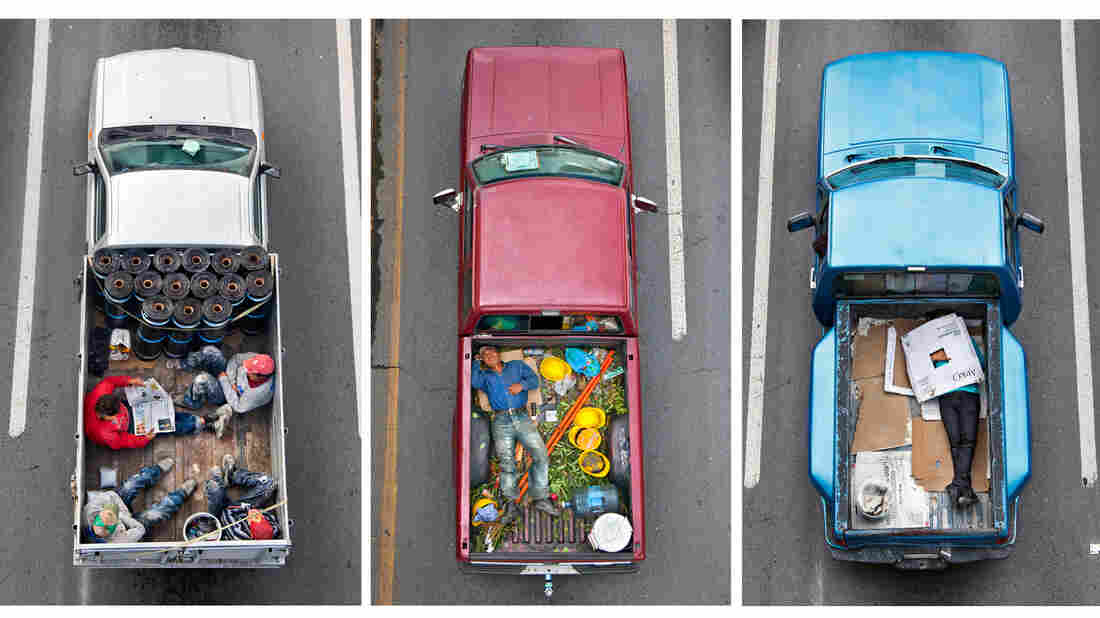 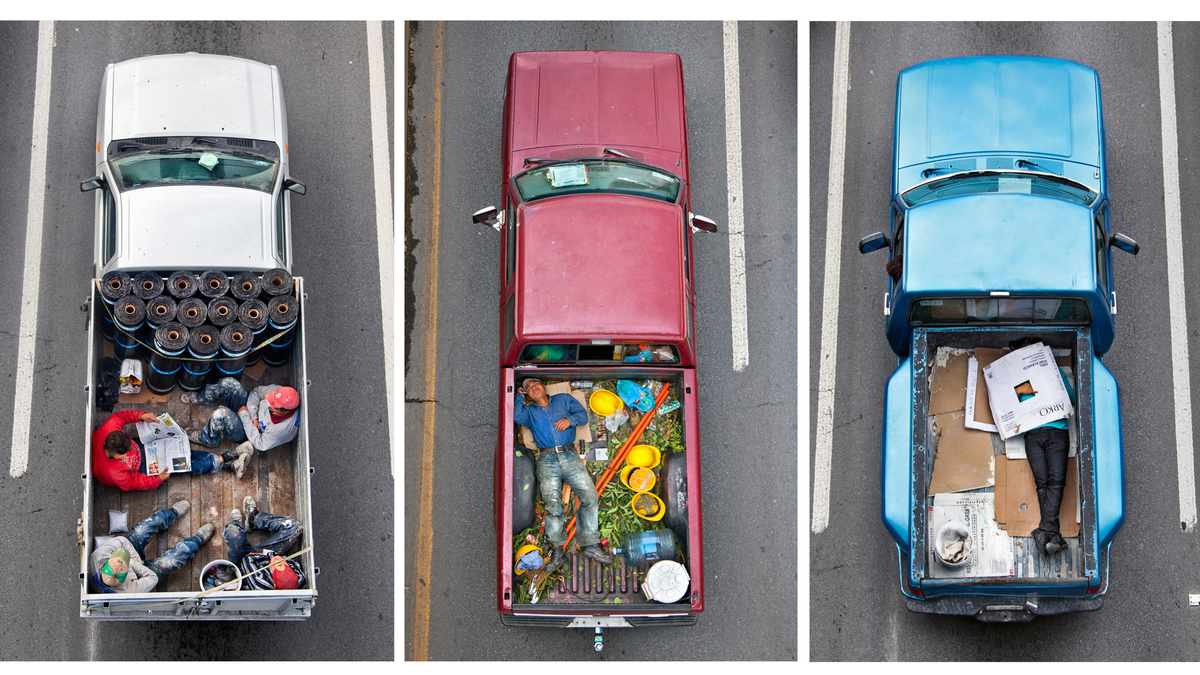 "Once I saw the truck was filled with people," he says, "I would pick that truck and wait for the truck to go underneath the overpass and take one or two pictures. That was it," he says. "If I got it I got it, if not, not."

Some mornings he would see one or two trucks, other times he would photograph up to six.

The resulting images are featured in the limited edition book Carpoolers.

"I love how they squeeze into things," Cartagena says. "Everything is in its place, everything has its spot. I mean, you couldn't design that."

In one photograph, legs stretch alongside a row of cabinets destined for a new kitchen; in another, a single knee wraps around a bucket.

Like many commutes, the Mexican carpoolers are sleepy. One man lies buried in his hoodie, another dozes on plants surrounded by gardening tools and yellow hardhats. Three men share a blanket, one sleeps on a pile of flattened cardboard wrapped tightly in a Mickey Mouse towel. In another, a giant, green tarp cover shields men from the rain.

The images in the first section of the book are of carpoolers only. For the second section, Cartagena shot from the workers' perspective. He got in the back of his own truck, asked his wife to drive and lay in the back, pointing his camera upward, capturing the sky, road signs, even the overpass where he had originally stood.

"For me it was a way to give voice to these characters I was photographing that are completely anonymous."

There are a lot of newspapers in the book. Not only are men reading them in some of the photographs but edition of the book contains a hand-glued newspaper clipping. The clippings, which Mr. Cartagena started collecting at 7-Elevens in November 2013, tell of accidents where men were ejected from the backs of trucks on their way to the job.

"It's completely dangerous," he says, "because they crash and fly out of the back of the truck. It's completely unsafe, it's illegal. That's why some of them go lying down."

Cartagena, who remembers that his own grandfather got into minor accidents, adds, "They're basically doing it because it's the most efficient way to travel. And you can't really blame them for it."

The workers live in the suburbs, far from their jobs in San Pedro. Their homes were built during the housing boom in Mexico, which began in 2001 and lasted over a decade. 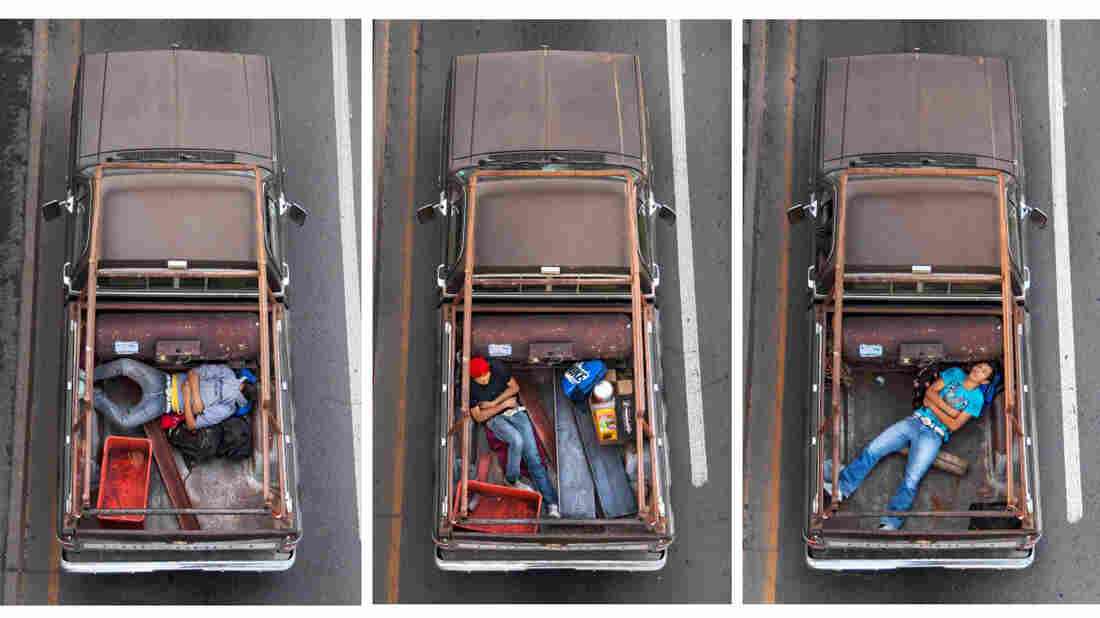 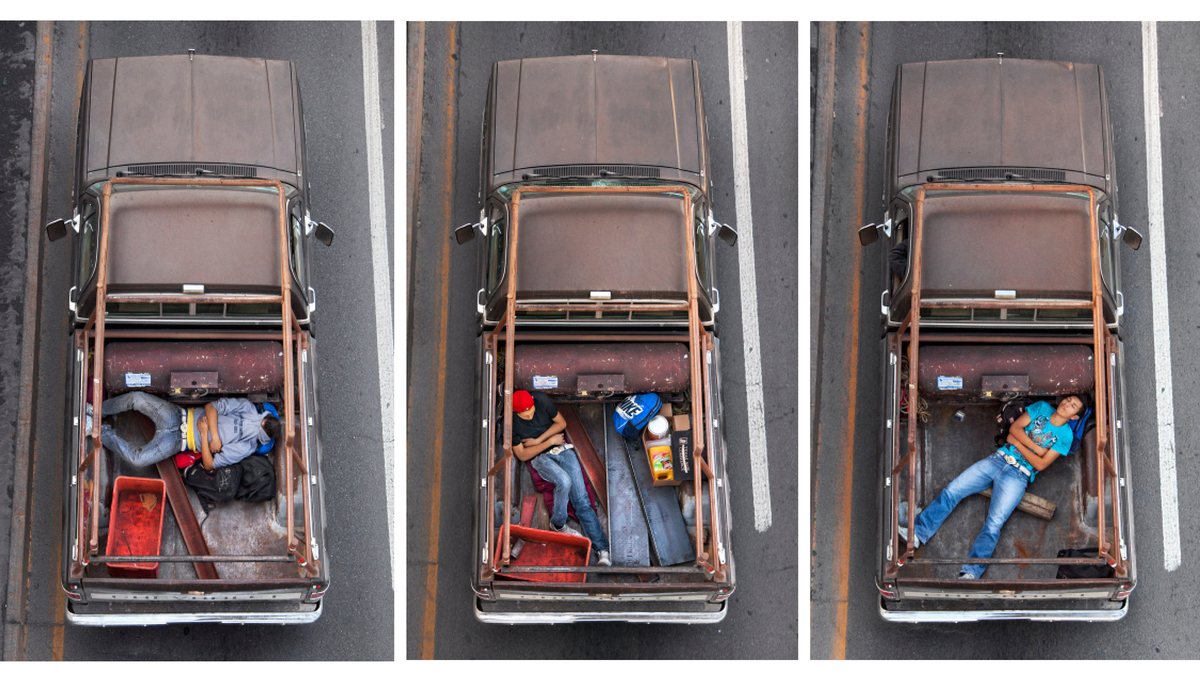 "San Pedro is super nice, the houses are beautiful, and there are parks, and the streets are clean," he says. "and so there's this irony where they're doing all this work in this beautiful town [but] they have to live in the middle of nowhere in these cookie-cutter houses with no trees or no parks with no public transportation."

Cartagena does not see his photographs as a call for better options for the carpoolers. "I don't think the photographs are a life-changer, it's more of, this is how I see the world around me and how it's affecting me and I want to comment about it," he says.

"This project was a perfect fit to see how people [are] willing to do whatever it takes to own a house but still go to the city, where there is work."