Accessibility links
Prediction: All Predictions About Ebola Are Unpredictable : Goats and Soda A million cases by the end of 2014. On the wane in Guinea in August. Coming soon to every major U.S. city. Predictions about Ebola frequently don't come true — and there's a reason for that.

Prediction: All Predictions About Ebola Are Unpredictable

Prediction: All Predictions About Ebola Are Unpredictable 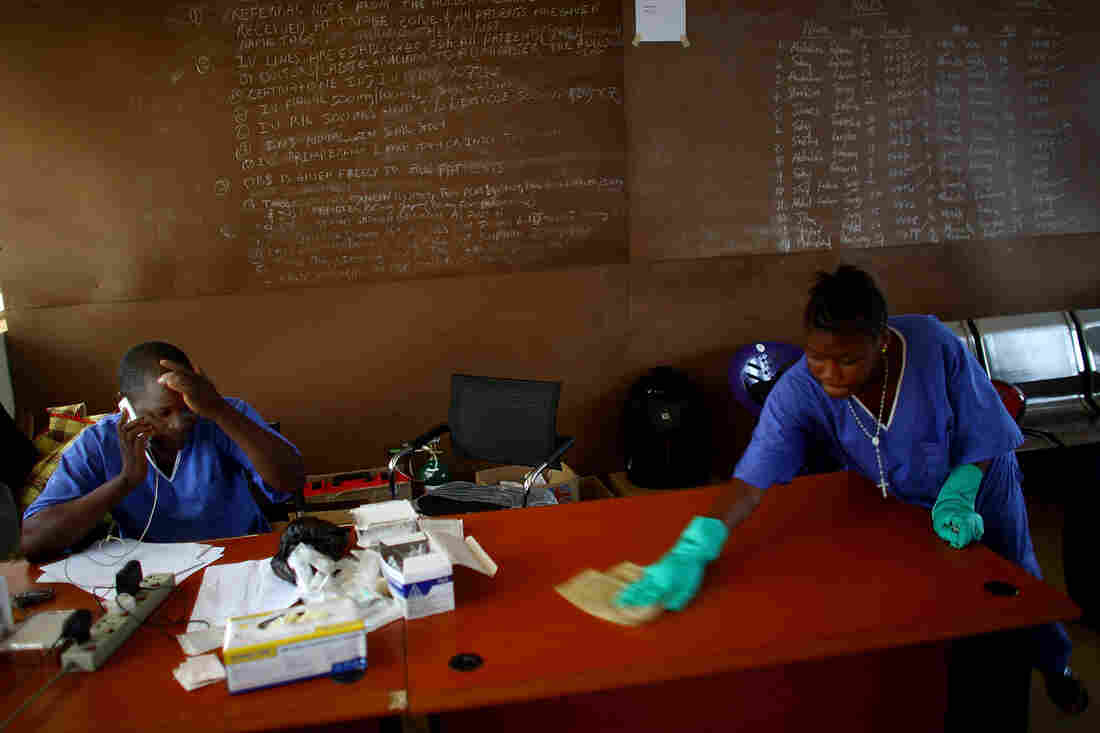 This photo was taken in November, a tough month for Sierra Leone, with Ebola cases reportedly on the rise. A staff member is disinfecting an office where Dr. Komba Songu M'Briwah talks on the phone. David Gilkey/NPR hide caption 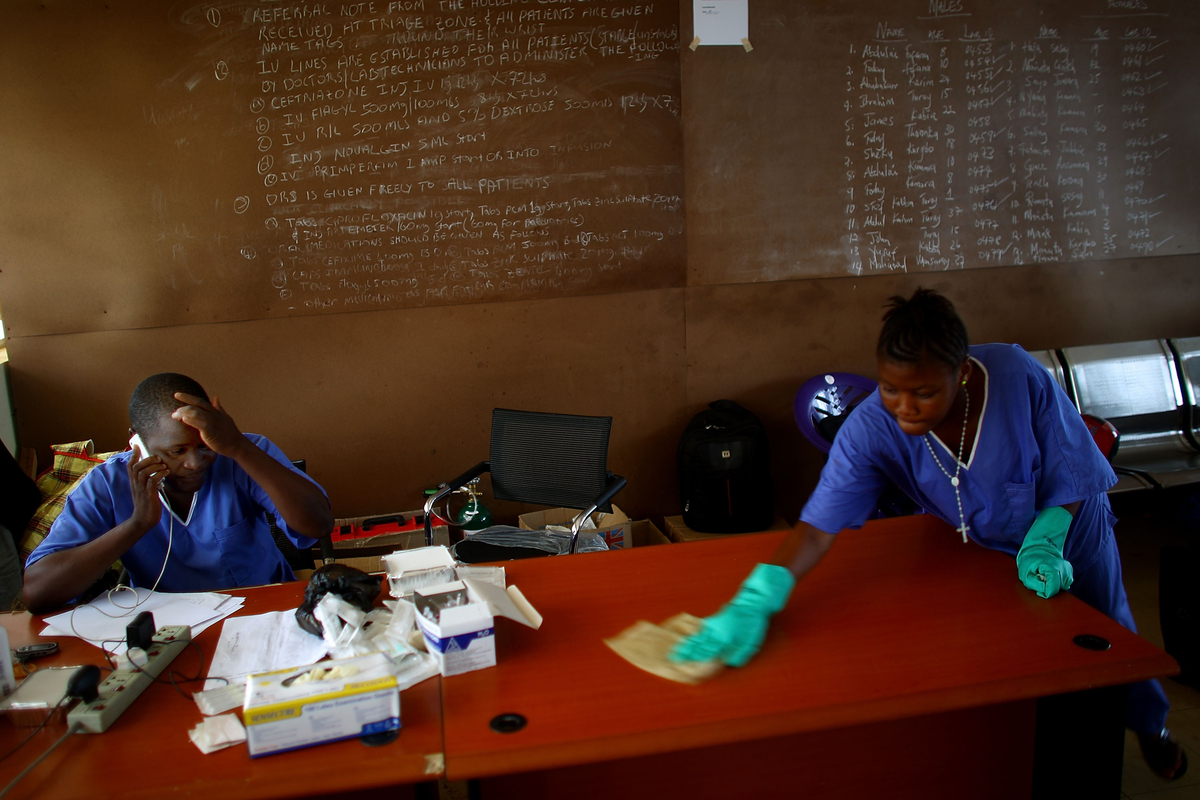 This photo was taken in November, a tough month for Sierra Leone, with Ebola cases reportedly on the rise. A staff member is disinfecting an office where Dr. Komba Songu M'Briwah talks on the phone.

Throughout the Ebola outbreak the two big questions have always been: How bad is this going to get? And when is it going to end?

Current data show that the numbers of new cases are dropping in all three of the hardest-hit West African countries. A new study predicts Ebola could be eliminated from Liberia by June.

But Ebola specialists are leery of predictions, even from the most reputable of sources.

"The idea of predicting infectious disease is relatively new. It's not like weather predictions," says Jeffrey Shaman, who despite the novelty of the field has been posting forecasts of the number of Ebola cases in Guinea, Sierra Leone and Liberia since September.

Shaman is an associate professor at Mailman School of Public Health at Columbia University in New York. He says that the main challenge in creating models to predict the direction of the Ebola outbreak has been a lack of reliable information. Case reporting was all over the map, from non-existent to sketchy to not bad.

"The information we have, our window into it, is very limited from where we sit," he says. "We don't know how much of it is reliable, whether there are biases that are shifting, whether the [new] practices and controls are coming into effect and working as well as we hope they would. All that will change the dynamics of the disease."

This squishy information may explain why so many past predictions have been so far off base.

Early on officials at the World Health Organization predicted that Ebola would be contained at only a few hundred cases. A few months later the Centers for Disease Control and Prevention was predicting up to 1.4 million cases by January 20, 2015 in Sierra Leone and Liberia alone. That calculation turned out to be wildly inflated. As of this week, WHO has counted roughly 21,000 cases.

It wasn't just the CDC that got it wrong. Back in August, before the outbreak really began to pick up steam, the chief scientist at Britain's Department for International Development said the worst of the crisis appeared to have passed in Guinea. After his declaration, the incidence of Ebola in Guinea would increase nearly fivefold from roughly 30 cases a week in early August to more than 150 cases a week in early December.

Researchers have also had a hard time guessing where the virus will pop up next.

Dr. David Relman, professor of infectious disease, microbiology and immunology at Stanford University's medical school, said in early November, "I don't think there's going to be a huge outbreak here, no. However, as best we can tell right now, it is quite possible that every major city will see at least a handful of cases." That hasn't happened. So far there've been only four Ebola cases diagnosed in the U.S. — the initial case of Liberian Thomas Eric Duncan at Presbyterian Hospital in Dallas in September; Nina PHam and Amber Vinson, two of the nurses who treated him; and Dr. Craig Spencer of Doctors Without Borders, who'd just returned from Guinea to New York.

Other respected researchers predicted that Ebola would spread throughout much of Africa and also to Europe. Those dire scenarios haven't occurred.

Shaman of Columbia University says part of the problem with making predictions during this outbreak is that researchers have very little experience with Ebola and none with Ebola in West Africa.

"This is completely novel territory," he says.

"Nobody was really anticipating a West African Ebola outbreak that would penetrate throughout the countries and in particular into the cities. That it would overwhelm the limited medical and public health infrastructure, that it would kill 50 percent of the nurses in many of the areas and would just break the backs of these countries. Nobody expected that."

So in an outbreak in which researchers are struggling just to understand the present, it's not surprising that they have an extremely hard time predicting the future.