Accessibility links
Taking Antibiotics During Travel Fosters Drug-Resistant Germs : Goats and Soda Many of us take antibiotics when we get tummy troubles in developing countries. Scientists say this opens the door for a dangerous visitor in the GI tract. These microbes can stick around for months. 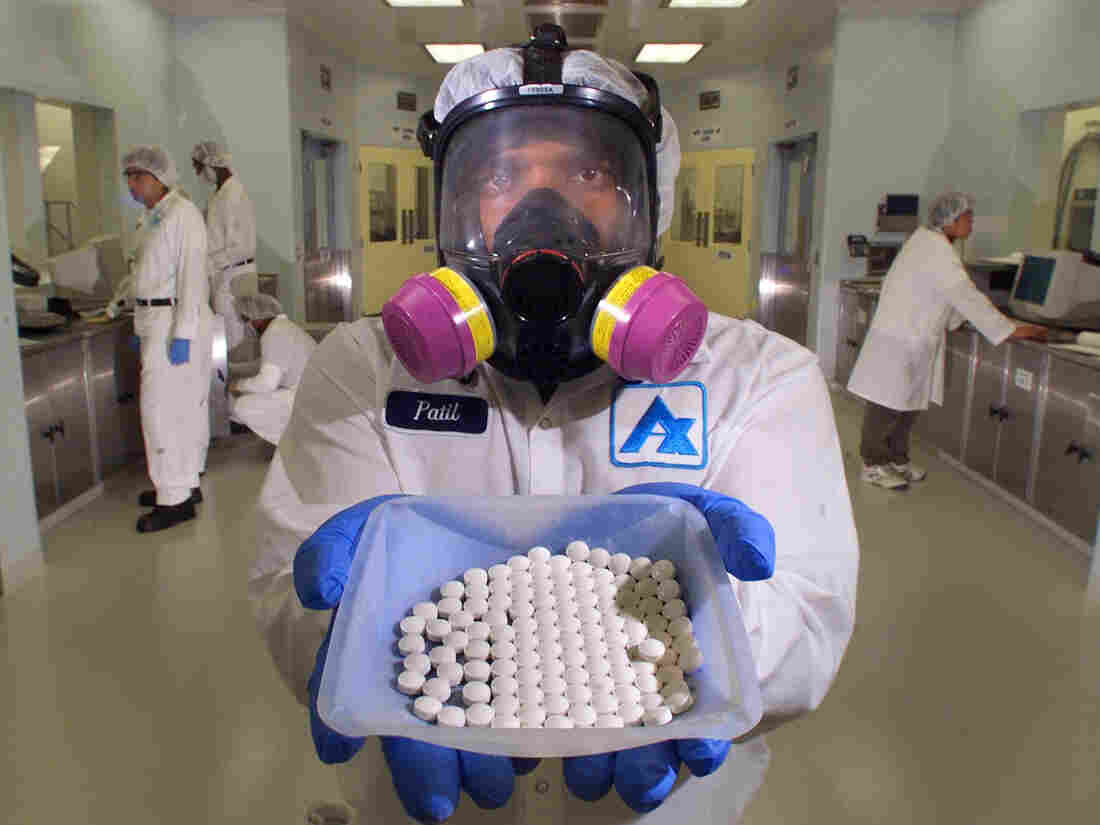 An employee of the drug company Apotex, examines some Ciprofloxacin at the plant in Canada. Cipro is commonly given to travelers for diarrhea. More than 20 million Cipro doses are prescribed each year in the U.S. Getty Images hide caption 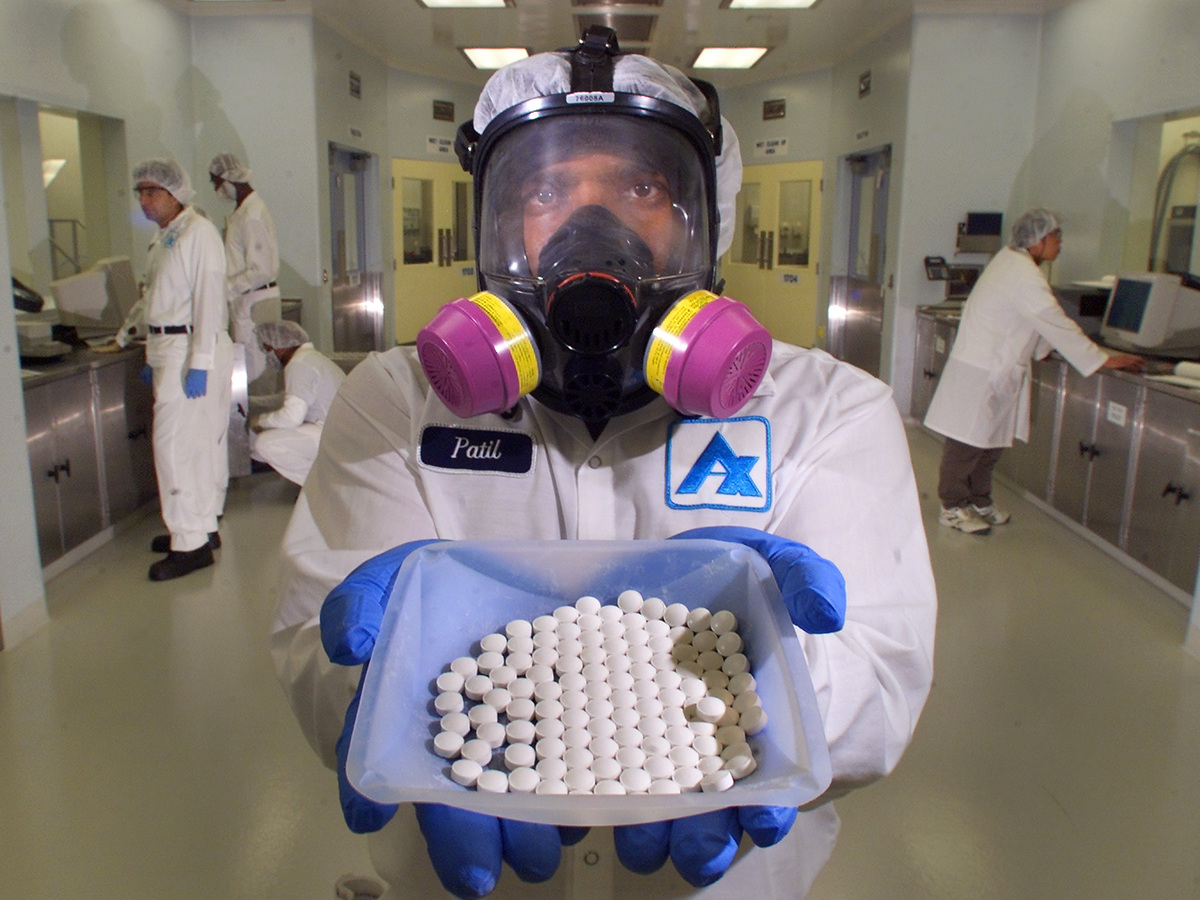 An employee of the drug company Apotex, examines some Ciprofloxacin at the plant in Canada. Cipro is commonly given to travelers for diarrhea. More than 20 million Cipro doses are prescribed each year in the U.S.

Delhi belly. That's what my brother-in-law calls the rumble in his stomach he invariably gets on business trips to India.

Like many travelers, he pops a few Cipro when Dehli belly hits. That may stop the microbes causing the GI distress, but it also opens the door to another unwanted visitor: drug-resisted bacteria.

About 40 percent of travelers to tropical regions will bring home drug-resistant microbes if they take antibiotics for diarrhea, the study found. For those going to India, the percentage rises to 80.

"That's just shocking," says infectious disease doctor Jay Keystone at the University of Toronto, who wasn't involved in the study.

For most travelers, these drug-resistant bacteria are harmless. They don't make them sick. "People don't even know they're there," Keystone says. 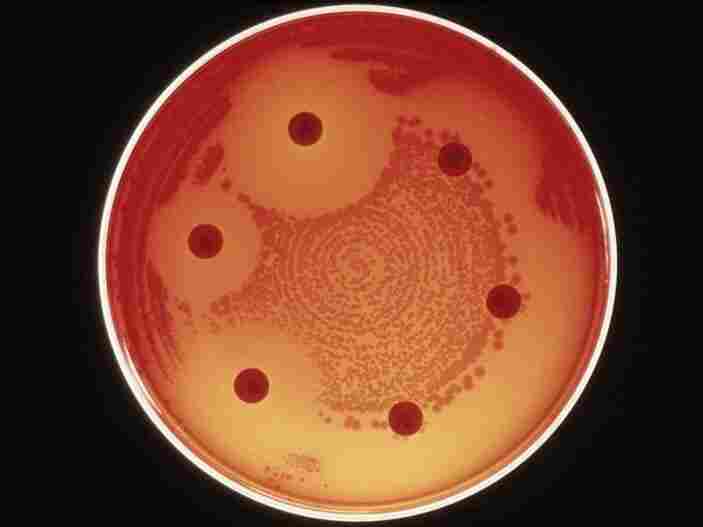 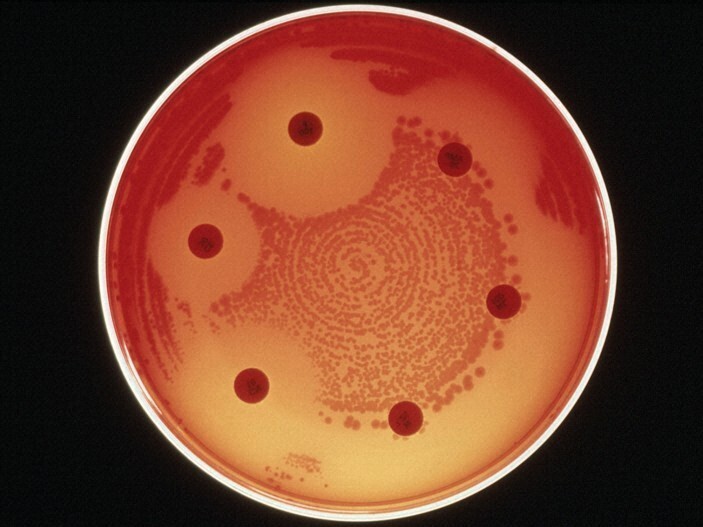 But when travelers bring the bacteria home, they can spread the superbugs to their community — and possibly put their friends and family at risk for a nasty infection.

"That's the scary part," Keystone says. "We think it's no big deal to take antibiotics while traveling. But when you look at the numbers, travelers are contributing to the spread of drug-resistant bacteria around the world."

The particular bacteria we're talking about have special enzymes that can chew up most antibiotics. So infections with these critters are hard to cure. Many antibiotics just don't work at all. (Specifically, these bacteria are called extended-spectrum betalactamase-producing Enterobacteriaceae, or ESBL-PE for short.)

These microbes can stick around in your GI tract for months, even years. And they live in your stool. So if you don't wash your hands after going to the bathroom, you can easily spread them.

A previous study found that each person spreads ESBL-PE to about 25 percent of the people they live with. Over time, the drug-resistant bacteria become more and more common in a community and its health care system, Keystone says.

"If a person has an underlying medical issue, these bacteria can cause serious infections," says infectious disease doctor Anu Kantele, who led the new study. "Or if the bacteria make their way to a person's bladder, they can cause repeated urinary tract infections. These are not bacteria you want inside you."

Previous studies have found that about 20 percent of travelers to developing countries bring home drug-resistant bacteria. The risk is highest in parts of Asia and North Africa. It's lowest in Latin America.

But Kantele and her colleagues wanted to see how antibiotics altered those risks. She and her team screened more than 400 Finns for ESBP-PE before and after a visit to a developing country.

Two-thirds of the travelers got diarrhea on their trips. Those who didn't treat the diarrhea with antibiotics had about an 20 percent risk of picking up a drug-resistant bacteria. Those that did take antibiotics had nearly a 40 percent chance.

"Antibiotics don't just kill the bacteria making you sick but also the good ones, the ones that protect us," Kantele says. This makes room for new bacteria to colonize your gut. And antibiotics select for the ones that are resistant to the drug."

So when Delhi belly hits, what can a traveler do? Be very judicious about taking antibiotics, both Kantele and Keystone say.

Their recommendations: Don't use antibiotics prophylactically on a trip. Don't use them for mild or moderate cases of diarrhea. Instead try an over-the-counter anti-diarrheal medication, such as loperamide.

"If you do have a fever, bloody stool or you're up to more than three to six runny stools, then consider taking an antibiotic," Keystone says.

Just be reasonable, he says. "If you just spent a fortune on your trip, and you have only a few days in a country, then you might consider an antibiotic, too."