Accessibility links
2 Approaches To Ending Smoking: Laws And Labels : Goats and Soda A fifth of the world's population smokes cigarettes, and countries around the world are trying to lower consumption. Bhutan and Australia present two strikingly different approaches. 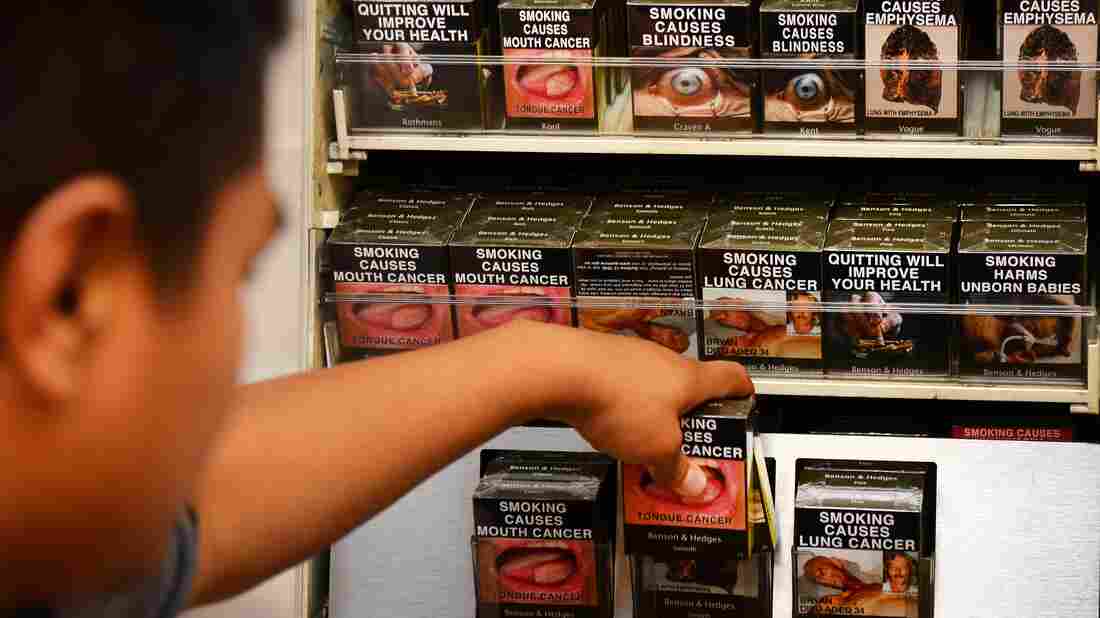 An employee in a Sydney bookshop in 2012 adjusts packaged cigarettes, which have to be sold in identical olive-brown packets bearing the same typeface and largely covered with graphic health warnings. William West/AFP/Getty Images hide caption 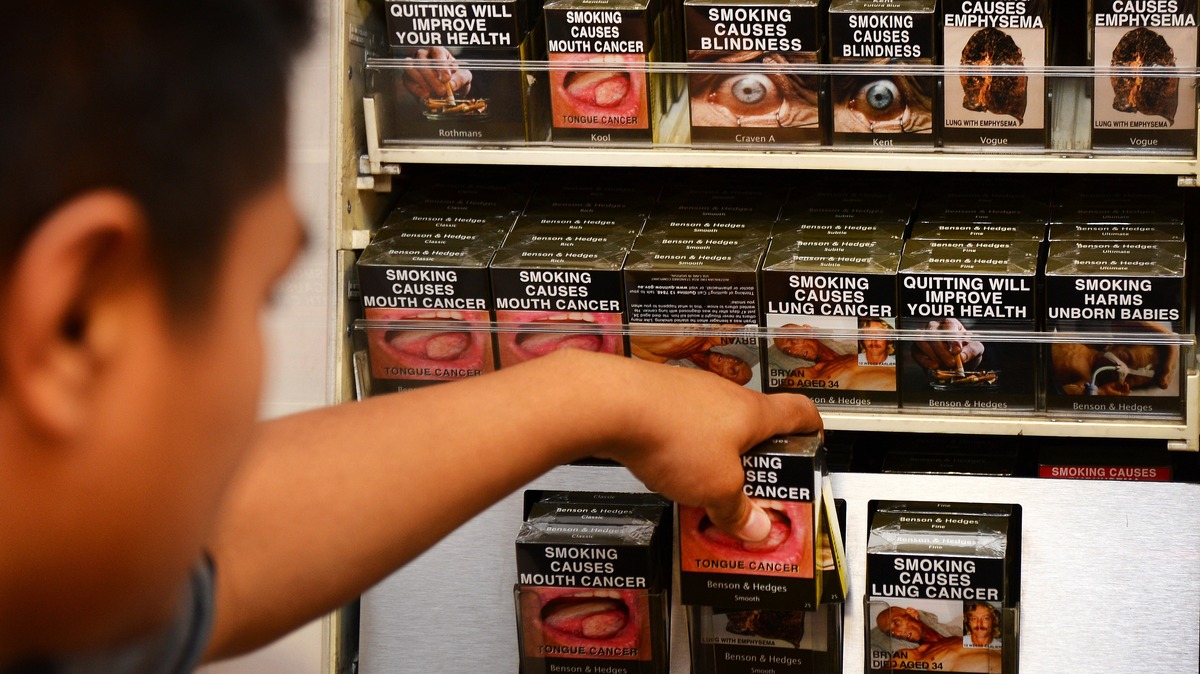 An employee in a Sydney bookshop in 2012 adjusts packaged cigarettes, which have to be sold in identical olive-brown packets bearing the same typeface and largely covered with graphic health warnings.

We hear it from smokers struggling to quit all the time: "If only they'd make it illegal, then I'd have to quit."

A fifth of the world's population sucks on cancer sticks, and while the West has cleared the air in some places with public bans, the global consumption rate has managed to creep up 13 percent in the past decade. Many countries have been experimenting with anti-tobacco strategies and legislation for years, but of all the efforts — from Orwellian-style bans to smoke-free cars — only a handful seem to have delivered results.

Oddly, making smoking illegal isn't one of them. In 2004 and 2005, the Himalayan Kingdom of Bhutan — which has measured its country's health not by GDP but by gross national happiness — became the first country to outright ban tobacco sales and make smoking in public places and private offices illegal. But it would seem that being happy, for some Bhutanese, depends on cigarettes, and enforcing the new laws — including harsh jail terms for minor possession offenses — has ruffled feathers while not necessarily reducing smoking rates.

That figure comes from the World Health Organization's Framework Convention on Tobacco Control, but it's a controversial statistic: Some experts believe the smoking rate in Bhutan is much higher and has remained unchanged since the ban. "We think that the smoking level in Bhutan is higher than you might expect — it's just that everybody's not doing it legally," says Jeffrey Drope, the American Cancer Society's managing director of economic and health policy research.

Publicly smoking or chewing tobacco products may be punishable offenses, but importing cigarettes in limited amounts for personal consumption is still allowed, provided taxes are paid. Like Prohibition did for alcohol, Bhutan's ban on producing and selling tobacco has fueled smuggling and under-the-counter sales.

So across the world, what has worked? Some anti-smoking experts cite the effort in Scotland, where displays by large retailers aimed at younger consumers are prohibited.

Others feel strongly that high taxation remains the most effective measure. In New York City, smokers cough up at least $10.50 per pack — the highest price in America — forcing many to rethink their addiction. Studies have shown that increasing tobacco prices by 50 percent leads to a 20 percent drop in consumption.

But surprisingly enough, something as simple as plain packaging can make a measurable difference, at least in Australia. Whether they're puffing on Marlboros or Camels, smokers Down Under have drawn cigarettes from the same brown package, often emblazoned with graphic photos of cancer-ridden body parts and warning labels, since 2012.

"It's a reminder to them every time they reach for the product that what they're doing is really bad," says Drope. Today, Australia enjoys its lowest-ever recorded smoking rate, having fallen from nearly 18 percent in 2004 to less than 13 percent in 2013.

So Big Brother can make a difference, just not necessarily with the long arm of the law.