Accessibility links
Time's 'Person Of The Year' Is Feeling Kind Of Lost : Goats and Soda A newly returned "Ebola fighter" tells why she didn't feel like a hero when she got back. Instead, she felt lost, beset by Ebola dreams and virtually imprisoned in her own home. 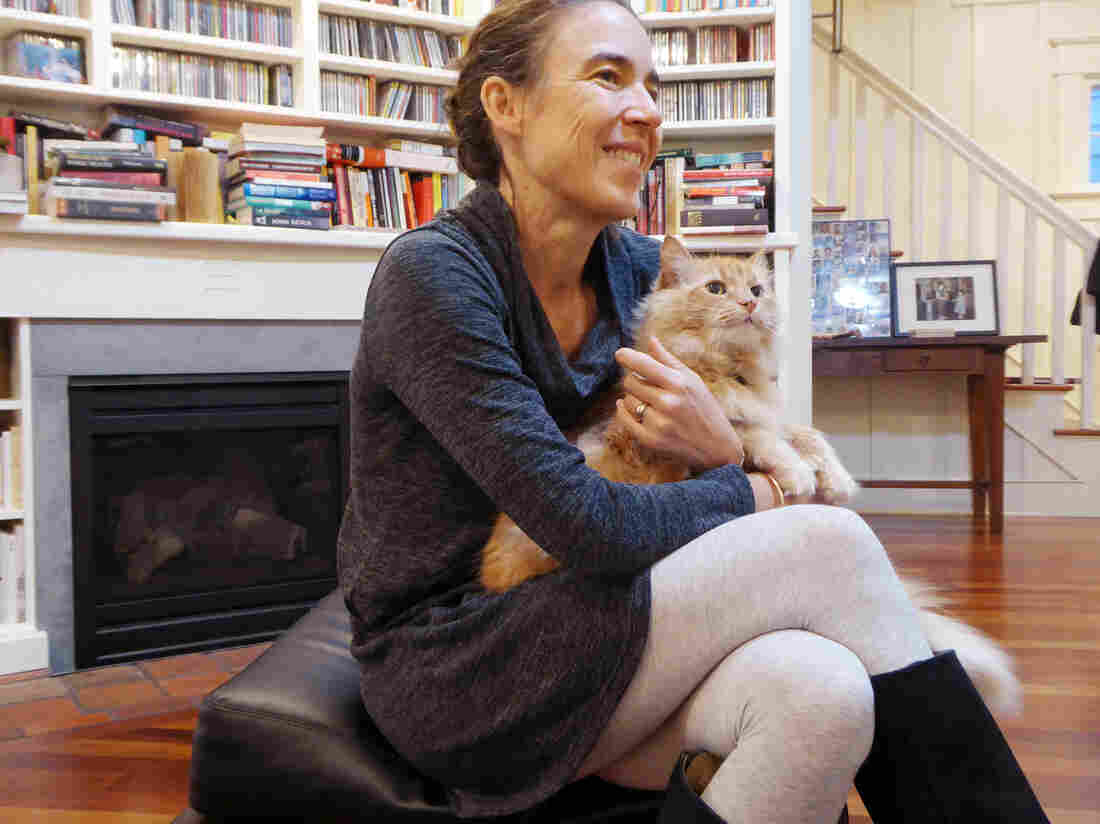 Back in Seattle after six weeks of Ebola duty in West Africa, Karin Huster was told by the health department that she might want to send away her two cats during her quarantine — "just in case." The cats didn't go anywhere. Courtesy of Karin Huster hide caption 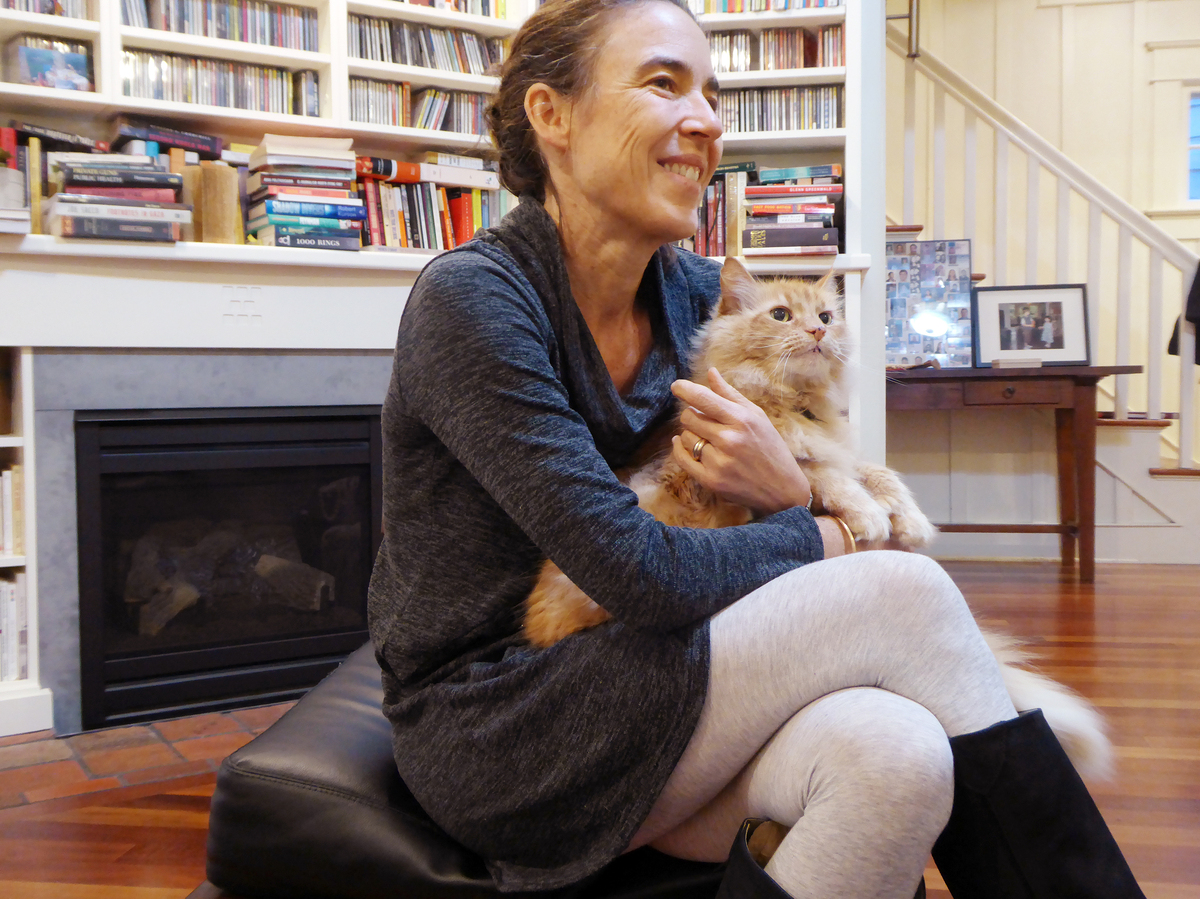 Back in Seattle after six weeks of Ebola duty in West Africa, Karin Huster was told by the health department that she might want to send away her two cats during her quarantine — "just in case." The cats didn't go anywhere.

"And now," the public health officer murmured apologetically, "here is the bad news."

I did not need any bad news.

For the past six weeks, I'd faced daily deaths in the Ebola treatment unit in Sierra Leone where I'd been working as a nurse, a seemingly losing battle with the disease and colleagues falling sick with Ebola.

I should have been thrilled to be back home in Seattle. Instead, I felt lost, struggling to find a sense of purpose. In West Africa, the pace was focused and unrelenting, going a hundred miles an hour seven days a week — caring for the sick and dying, attempting to save lives, doing all we could to improve the appalling outcomes of those afflicted with Ebola. In the blink of an eye — a flight to another continent — that frenetic pace abruptly came to a halt.

I now felt guilty at having abandoned my patients and colleagues at a time when what they needed most was more of me. My kids, 20 and 18 years old, were doing well. They hardly seemed to need me here. As hard as I tried, it was difficult to find meaning in what I was doing at home. And I couldn't do much; my activities were severely restricted by my county's health department for 21 days — the maximum known incubation time for Ebola.

That was the bad news from the health department official on my first day back: severe limitations on my freedom of movement. Visiting any public space — a restaurant, a movie theater, a grocery store or a gym — was strongly discouraged if not implicitly forbidden. Buses and planes were out of the question. Trips farther than 50 miles from home were frowned upon. Last but not least, the official strongly suggested — "just in case" — that I remove our two cats from our house (but somehow not my family members). It was a recommendation I did not follow.

All of this conveniently ignored the fact that I was perfectly healthy, with no signs and symptoms of Ebola. I presented zero risk of spreading something I didn't have.

During those 21 days, my mind had time to wander.

A Nurse's Desperate Plea: Show Me The Ebola Money

Unable to work or go about my regular life, I pondered the ethical dilemmas of altered standards of care and unequal distribution of resources. My mind screamed outrage at the thousands of deaths that shouldn't have been. Why didn't we have the simple intravenous fluids our patients so desperately needed — the one therapy we knew could make a difference? Why didn't we have morphine to relieve their terrible pain? I felt guilty at having been unable — because of lack of staff, basic supplies or appropriate medicines — to care as well as I knew how for my patients through the course of their illness. They were denied what I consider their most basic human right: a dignified and painless death.

I couldn't escape Ebola, even in my dreams. Not scary dreams but exhausting dreams. Dreams of what we could have done better, dreams of where we dropped the ball, dreams of finding a freezer to store ice cream to calm patients' painful throats, dreams of ways to cool our hot space suits, dreams about bits and pieces of work I forgot to pass on to the colleagues who would replace me.

That day that the health official visited, I was physically and emotionally exhausted. I yearned for a sense of normalcy and support from my community but found none. I was angry and felt rejected. Alone. The message that had been delivered from the public via that health officer was clear: We view you as a threat. We do not trust you and do not want you in our midst for the next 21 days. This imposed seclusion stigmatized me and made it that much more difficult to reach out to others.

The mental health of those returning from the Ebola battlefield has seldom been addressed. Yet we know all too well that those who have worked under extremely stressful conditions — witnessing deeply disturbing scenes or having put their lives on the line day in and day out — are at markedly increased risk of experiencing some form of post-traumatic stress when returning home.

Time magazine said the Ebola fighter is the person of the year. But we, the Ebola fighters, don't feel like heroes returning from war. We do not feel owed anything, but the one thing we deserve is support: from our government as well as from our communities. Instead, upon returning we are too often feared, stigmatized and mistrusted. The way we are perfunctorily and conveniently "pushed aside" for 21 days has fleeting but disturbing resemblances to how Vietnam veterans were treated upon their return from the field. Stigmatizing those we need most to win the fight against Ebola is hardly the right answer.

A genuine welcome hug may really be all that we need.

Karin Huster, RN, BSN, MPH, was Partner in Health's clinical manager at the Maforki Ebola Treatment Unit in Sierra Leone. She is now back in Seattle, where her work remains focused on Ebola — this time advocating and engaging with foundations and universities to push for improved preparedness and response. Huster is scheduled to return to Sierra Leone in early March.