Accessibility links
Now This Is An Example Of Truly Educational Radio : Goats and Soda In Sierra Leone, schools have been closed since July to keep Ebola from spreading. So the government began a new way of teaching — on the radio.

Listen to one of the radio lessons

Now This Is An Example Of Truly Educational Radio 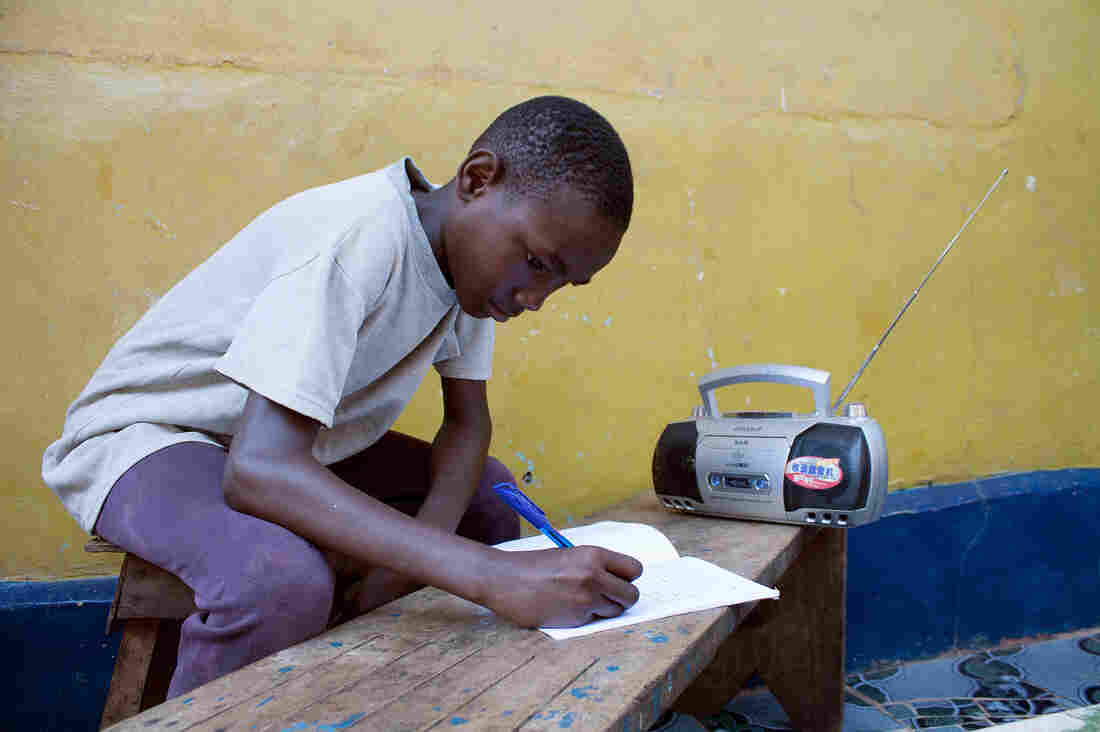 Jimmy Kamara, 9, is one of the students in Sierra Leone who use radios to continue their education while schools remain closed owing to Ebola. Tolu Bade/Courtesy of UNICEF hide caption 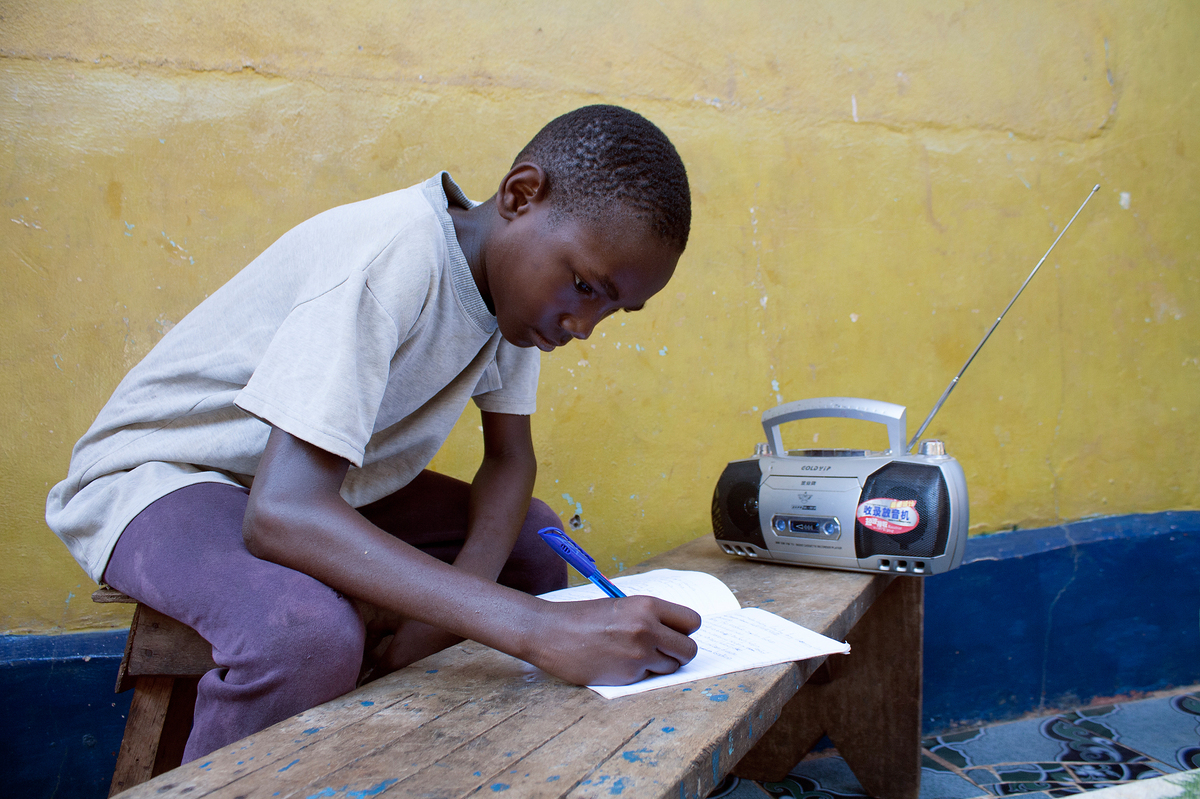 Jimmy Kamara, 9, is one of the students in Sierra Leone who use radios to continue their education while schools remain closed owing to Ebola.

Every day, 17-year-old Kaday goes to school by turning on the radio.

She's one of the million school-age children in Sierra Leone who've had no classroom to go to since July. That's when the government closed all schools to curb the spread of Ebola.

But that doesn't mean the kids have stopped learning. In October, the government launched a radio education program, partnering with UNICEF and several development organizations. Teachers write and record hourlong lessons that are broadcast on 41 government radio stations, as well as the country's only TV channel. Younger children listen in the morning; older ones tune in during the afternoon and evening.

"This is to ensure that children's rights to education is not disrupted even when schools have been closed," says Wongani Grace Taulo, UNICEF's education chief in Sierra Leone. "It's been more than half a year of school closure. The implications can be devastating when children just stay home [and] lose out on their academic gains."

UNICEF's partner organizations visit around 2,000 households of school-age children each week to see how many children are listening. At first, fewer than 20 percent were tuned in. Gradually the numbers picked up. At its peak, more than 70 percent of students were listening. The average rate, Taulo says, is about 50 percent.

The radio lessons could be critical in a country where the decade-long civil war had weakened the education system even before Ebola struck. Fewer than 45 percent of adults are literate, and the secondary school attendance rate among adolescent boys and girls is 40 and 33 percent, respectively. The Ebola outbreak has threatened to reverse any progress Sierra Leone and its neighbors Guinea and Liberia have made in rebuilding its schools. 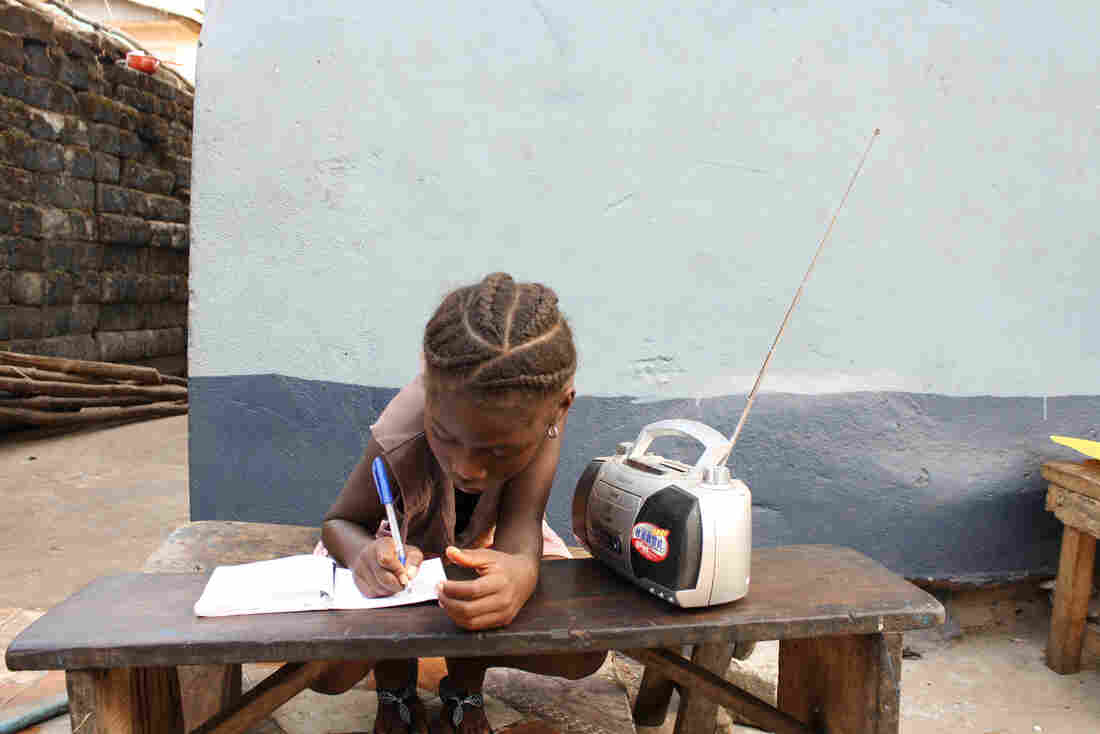 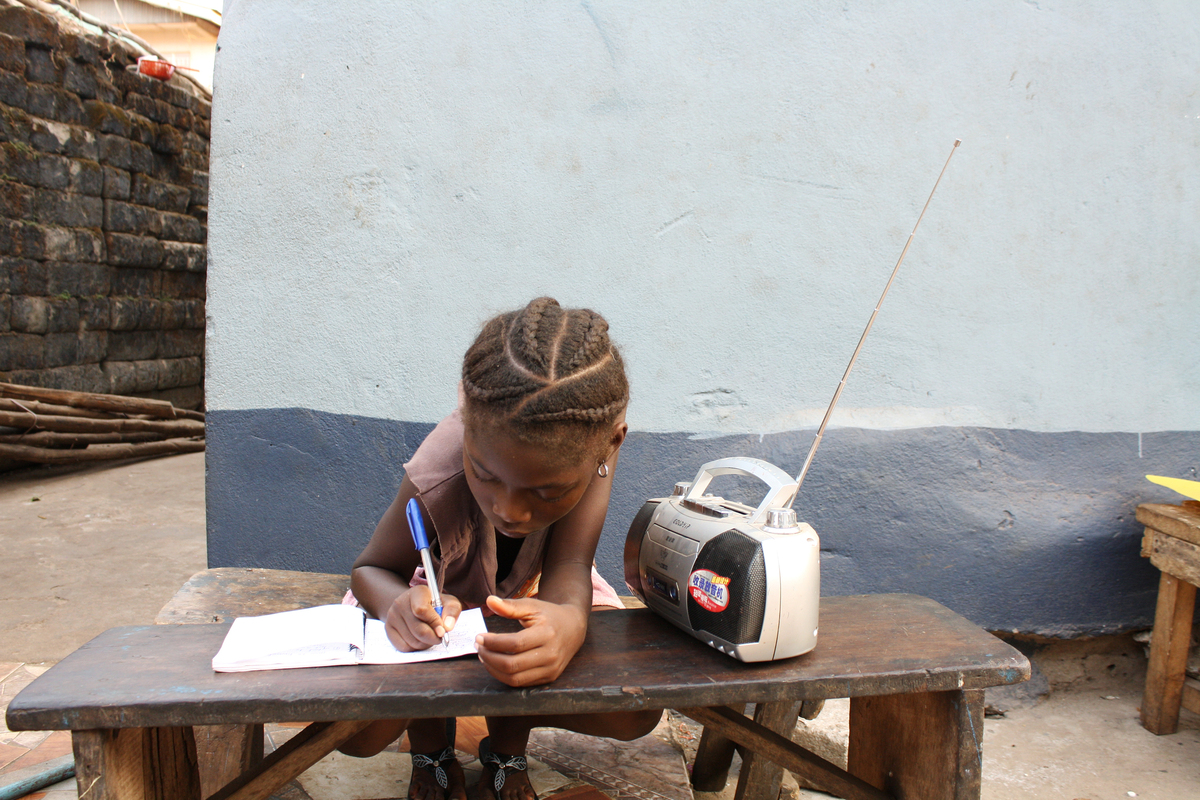 Angela Kamara, 6 years old, takes a lesson from the radio.

Listen to one of the radio lessons

When schools finally reopen in Sierra Leone, Taulo adds, the radio program will be adjusted to serve as a complement — rather than an alternative — to classrooms.

But school by radio isn't a perfect solution.

Radio is by far the most common way Sierra Leoneans get their information, with studies estimating that between 70 and 90 percent of the population tune in daily. But the number of people who actually own a radio is only about 25 percent, the country's education minister told Agence France-Presse.

And that's a "generous estimate," says Chernor Bah, a girl's rights advocate from Sierra Leone. He's been helping make sure the radio program reaches as many underserved children as possible.

"With adolescent girls, there's an even greater challenge," he says. "Girls tend to face the additional burden of providing for their families. So instead of being home listening to the radio, most girls will be outside selling food."

Even if students do listen, says Bah, the radio program doesn't give them a chance to interact with teachers and other students. The government encourages students to send questions via text message, but many of the poorest students can't afford a phone.

That's where organizations like BRAC, one of the world's largest education organizations, have stepped in. With support from the Malala Fund, the nonprofit has bought radios for 1,200 of the most marginalized girls in Sierra Leone. It's also created 40 informal classrooms, where six or seven girls get together with a mentor up to four times a week to discuss the day's lessons, learn about Ebola and discuss personal challenges.

Bah particularly remembers Kaday, the 17-year-old, whose mother was one of the first health care workers in Sierra Leone to die of Ebola. "This is a story of a girl who has gone through too much," Bah says. Before Ebola struck, her parents sent her to live with an aunt in the city, hoping Kaday could get an education there. But the aunt tried to persuade her to have sex with an older man for money. Another aunt treated her as a housemaid. 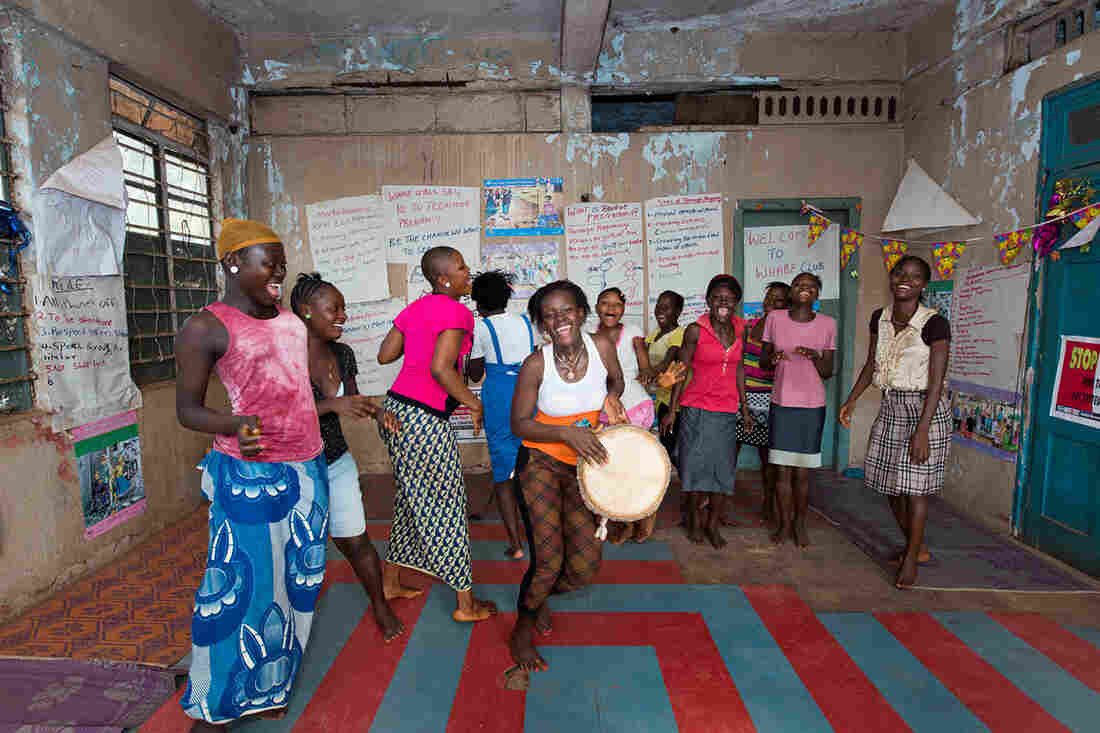 School may not be in session, but there are special clubs for girls to talk about their radio lessons and just have fun hanging out. Alison Wright/Courtesy of BRAC hide caption 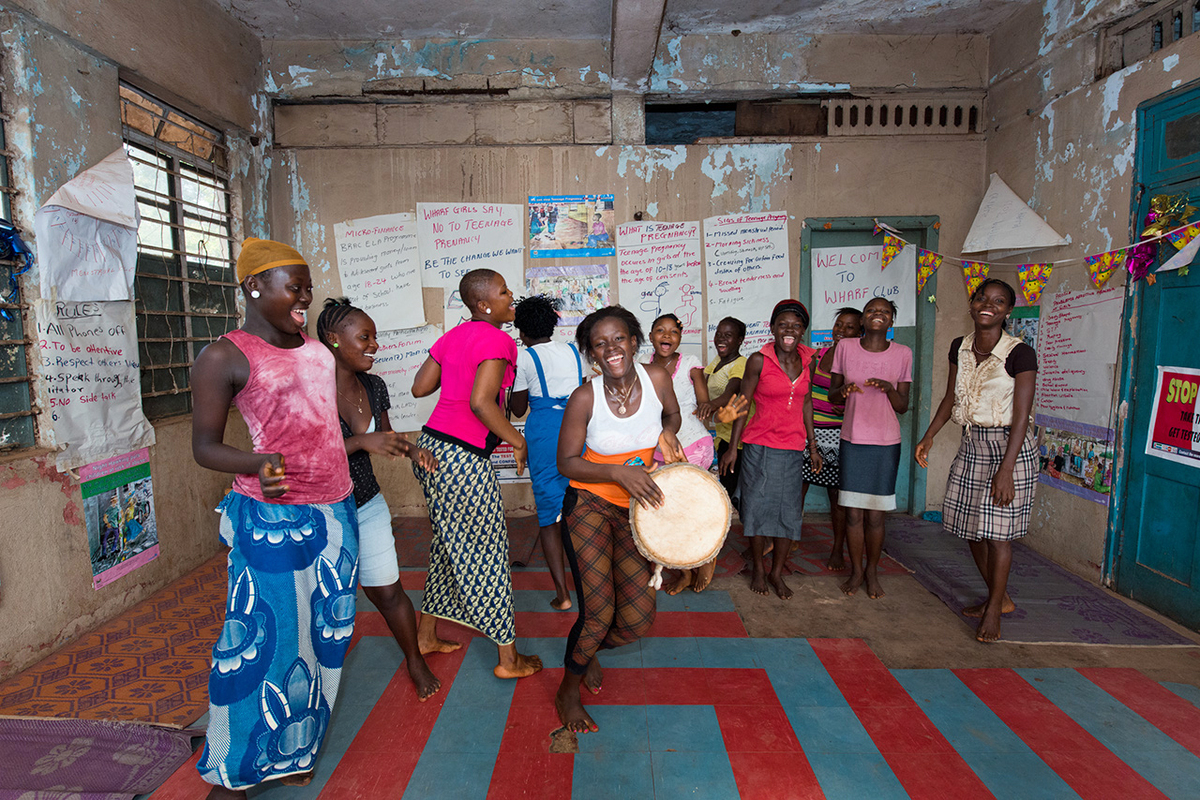 School may not be in session, but there are special clubs for girls to talk about their radio lessons and just have fun hanging out.

"This girl, now 17, is only in grade six because of all this back and forth," Bah recalls. "The [school club] is the place she feels normal again."

Kaday had just taken her sixth-grade exam when schools shut down. All she wants, Bah says, is to go back to class. "You don't forget a girl like that."