Accessibility links
House Of Carbs: A Big Ball O' Carbohydrates Is Good Eating In Ghana : Goats and Soda Our Peace Corps correspondent meets the giant ball of carbs that floats in many a Ghanaian stew. She takes a pinch (using her right hand only). And she learns to almost love it.

House Of Carbs: A Big Ball O' Carbohydrates Is Good Eating In Ghana

House Of Carbs: A Big Ball O' Carbohydrates Is Good Eating In Ghana 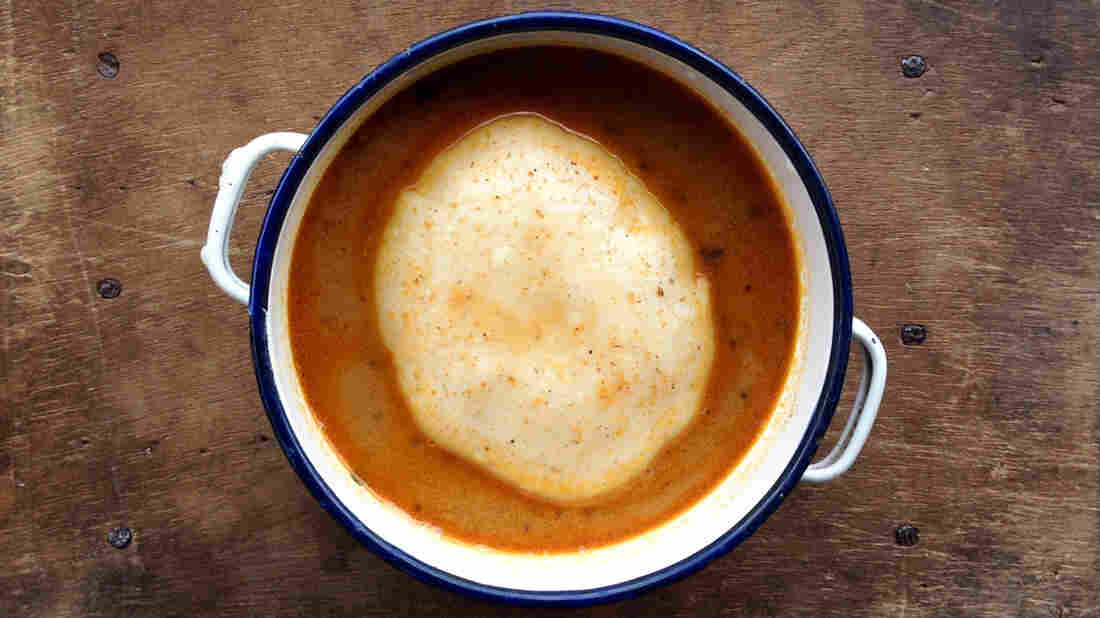 Who needs a spoon when you can take a pinch of fufu — that's what they call the carb ball in Ghana — and sop up a bit of ground nut soup? Kiley Shields for NPR hide caption 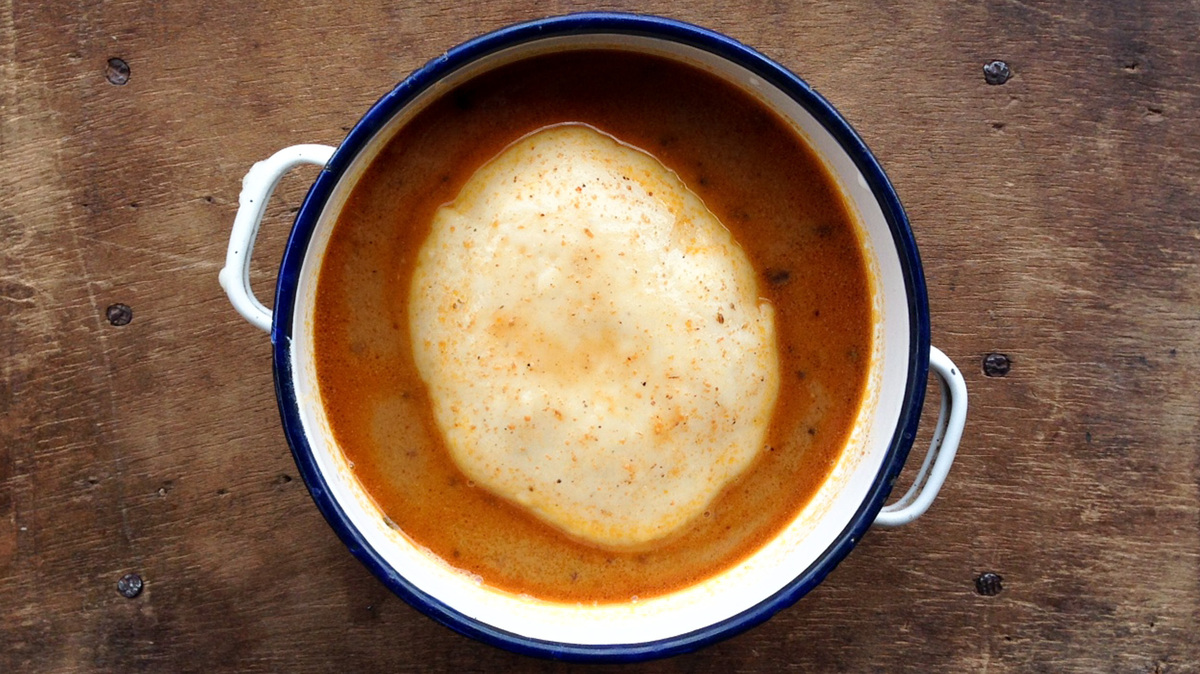 Who needs a spoon when you can take a pinch of fufu — that's what they call the carb ball in Ghana — and sop up a bit of ground nut soup?

I remember the first time I encountered this specialty of rural Ghana, where I'm spending two years as a Peace Corps volunteer.

My host mom and host sister took some boiled plaintains and cassava and pounded them with a massive pestle in a foot-high mortar for what felt like forever. The pounding produced a yellowish pillow. My host mom scooped off a piece, then tossed and massaged it between her hands to make a perfect ball the size of a large grapefruit. It's called a fufu. She dropped it into a bowl and poured simmering groundnut stew around and on top of the ball (groundnuts are what they call peanuts here). The fufu ball was like an iceberg — only the top ten percent could be seen.

Then it was time to dig in. I scooped out a pinch of fufu – about a fingerful – and put it in my mouth, The fufu itself was a bit chewy, a bit slimy, a big gloopy. But the groundnut stew did lend it a spicy peanut-and-tomato flavor. I repeated until I'd gulped down about a third of my ball. Feeling too full from the dense carb mound, I gave up.

Why balls? Convenience, most likely. Rural Ghana is not a region of seven-course dinners with delicate gourmet dishes. People are poor, and meals are generally communal and center around a soup or stew in a bowl. There are no soup spoons. So how else can you eat except by taking pinches of a floating globule? With a big ball in a bowl, each diner can claim a section of the ball and pinch away. As you might expect, fingers get burned. (Although it doesn't seem to bother the Ghanaians with whom I've shared a carb ball.) 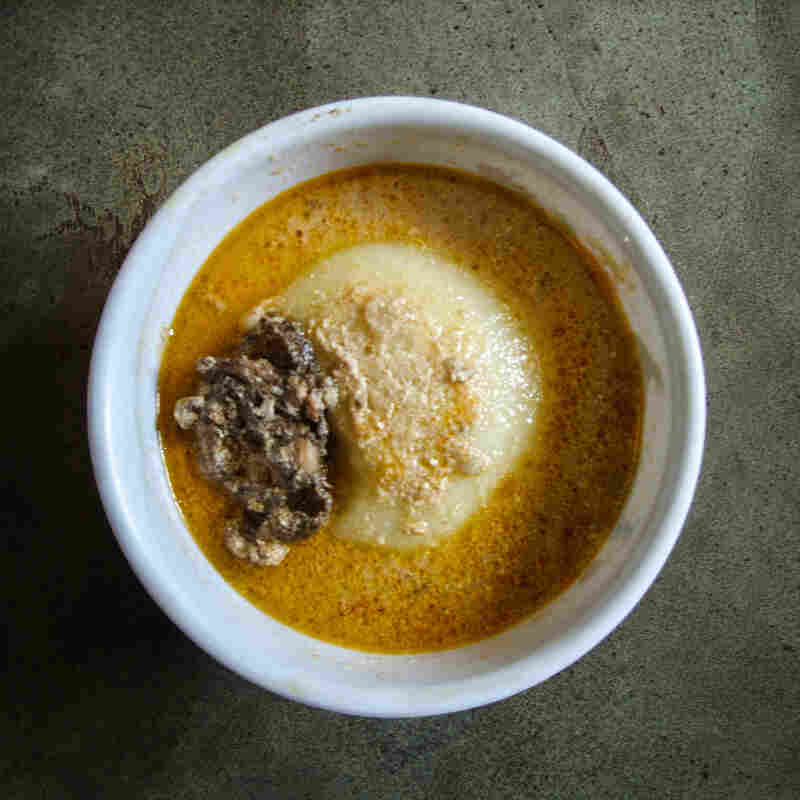 A carb ball shares the bowl with a chunk of meat. Terrie Schweitzer/Flickr hide caption 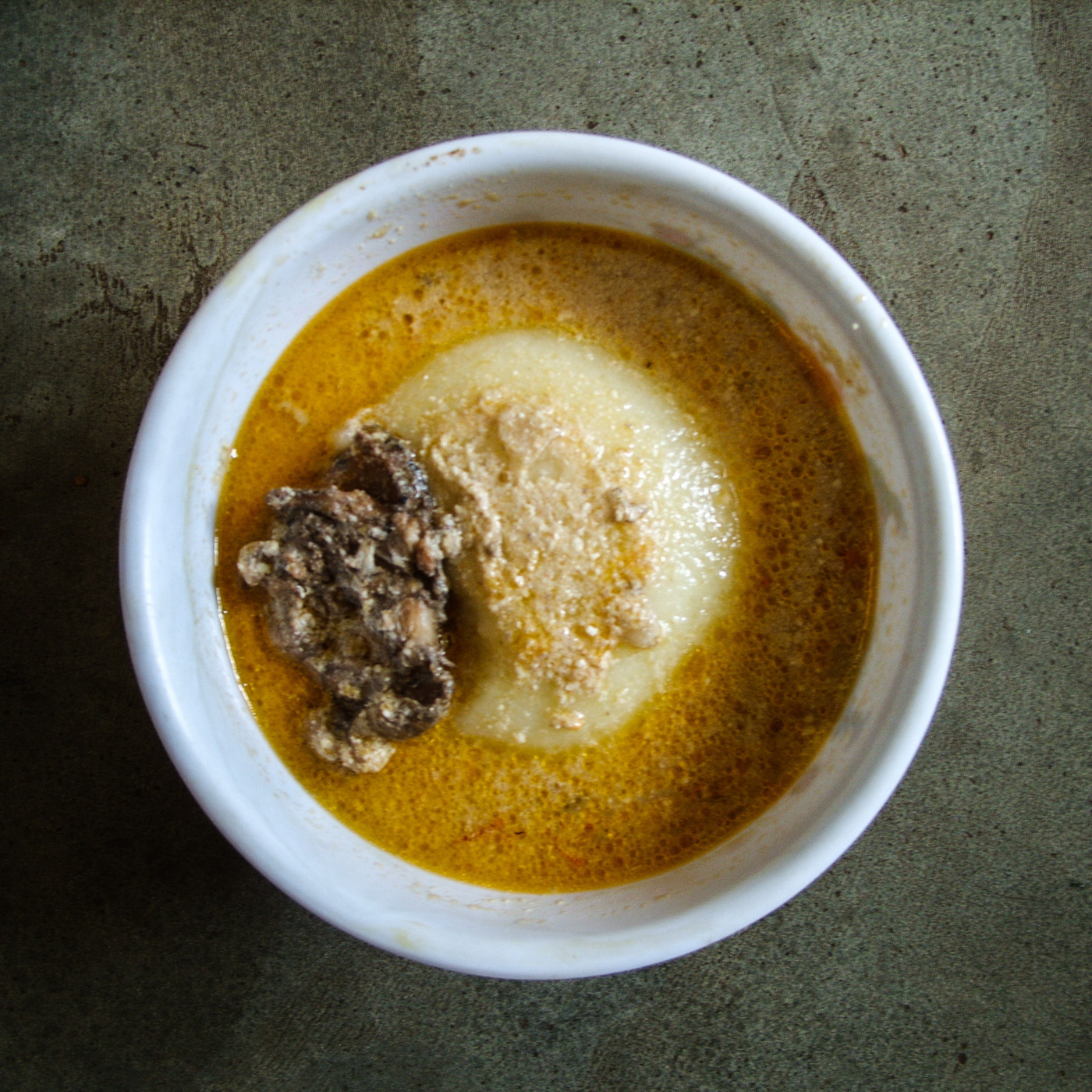 A carb ball shares the bowl with a chunk of meat.

As the weeks have gone by, I've learned that there are lots of ways to form a carb ball: fermented corn, mashed rice, fried dough.

Not every carb ball sits in a bowl of soup. For breakfast, Ghanaians like fried dough balls called bofrot — a cousin of America's fried doughnut holes. Typically bofrot is sold off the head of a woman roaming a market place or a busy road chanting a sales slogan, usually some variation of, "They're sweet and nice, tasty."

You do have to watch your carb ball etiquette. In Ghana, if you're eating with your hands, always use the right hand. The left hand is the designated hand for cleaning up after a bathroom visit and is considered unclean. I've also learned that it's rude to sniff food or to talk while eating (the fear is that conversation plus consumption will lead to choking).

Then again, if you're watching someone eat a bowl of food and are feeling hungry, it's completely acceptable to wash your right hand, then dig in.

And what you may find is that carb balls aren't as daunting as they seem at first. After getting used to the texture, I find myself actually craving carb balls. Besides, the floating fufu helps make the typically paltry serving of soup go a long way. And there's nothing like the burst of energy a carb ball can give on a hot and lazy Ghanaian afternoon.

A number of commenters took offense at the phrase "carb ball." Kiley Shields responds: "For those who read this post about fufu and other Ghanaian dishes and found it offensive, I am truly sorry. I love fufu and all the culture that comes with it. I used the term 'carb ball' in what I hoped was an endearing way to characterize the many different kinds of starches that are part of meals here. Again, I apologize for any offense taken. I am eating fufu for dinner tonight and look forward to savoring every bite."

In an earlier version of this post, we referred to the fried dough ball that's popular in Ghana as bao fruit. In fact, the doughnut-like snack is commonly known as "bofrot."