Accessibility links
Volunteer Recap: Connecting Moms To Midwives In Timor-Leste : Goats and Soda A global health student from Seattle went to the tiny country to study maternal health. But she also learned how to be more friendly to her neighbors. 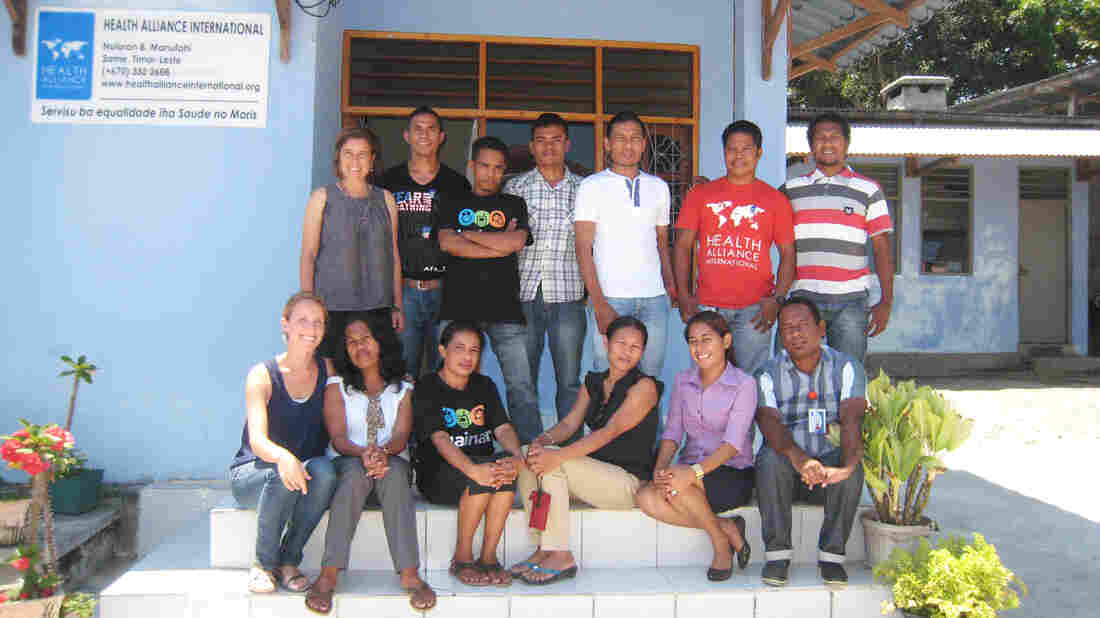 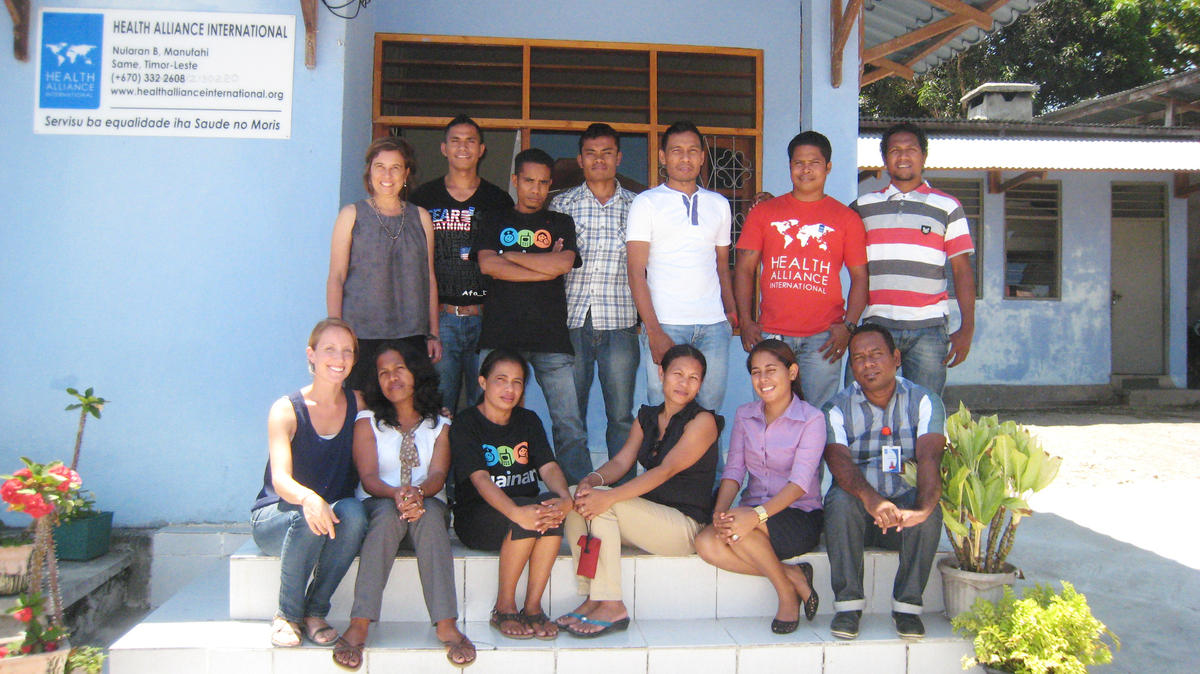 At first the tiny country of Timor-Leste reminded Gena Barnabee of being in the U.S. It had movie theaters, malls and plenty of roads. 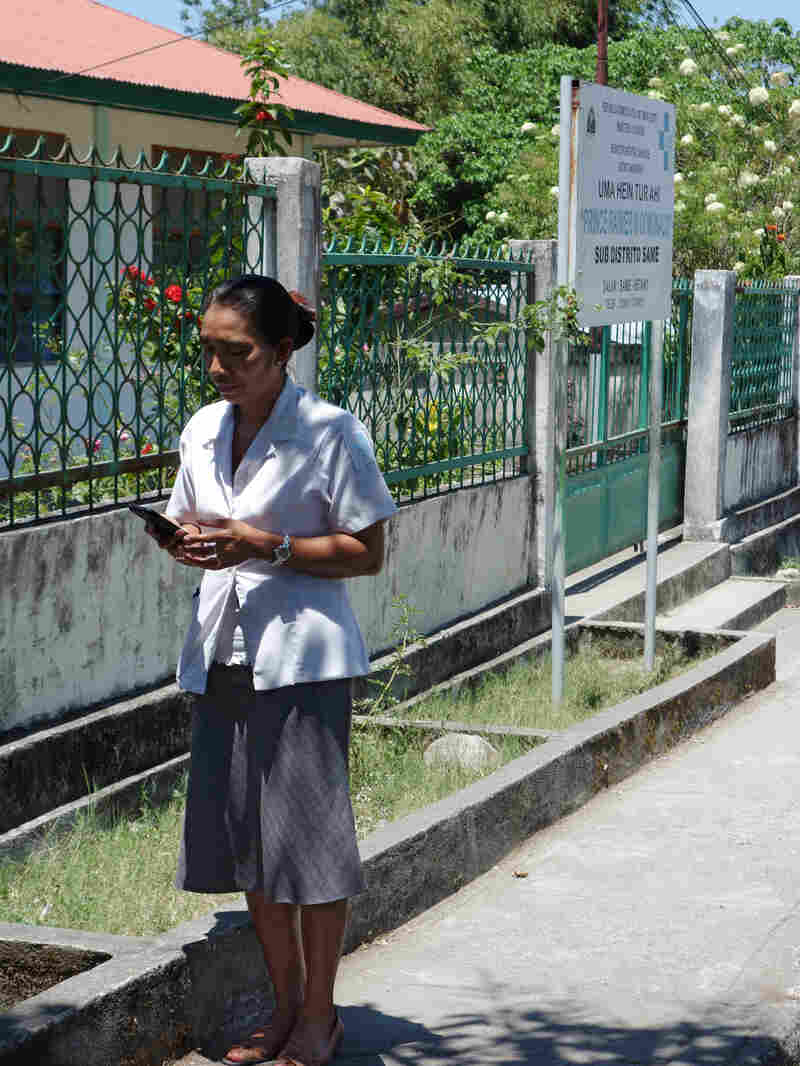 Midwife Mana Justa checks her phone outside the maternity ward in the village Same. The Liga Inan service allows mothers and midwives to send short messages to each other when the mothers have questions. Courtesy of Gena Barnabee hide caption 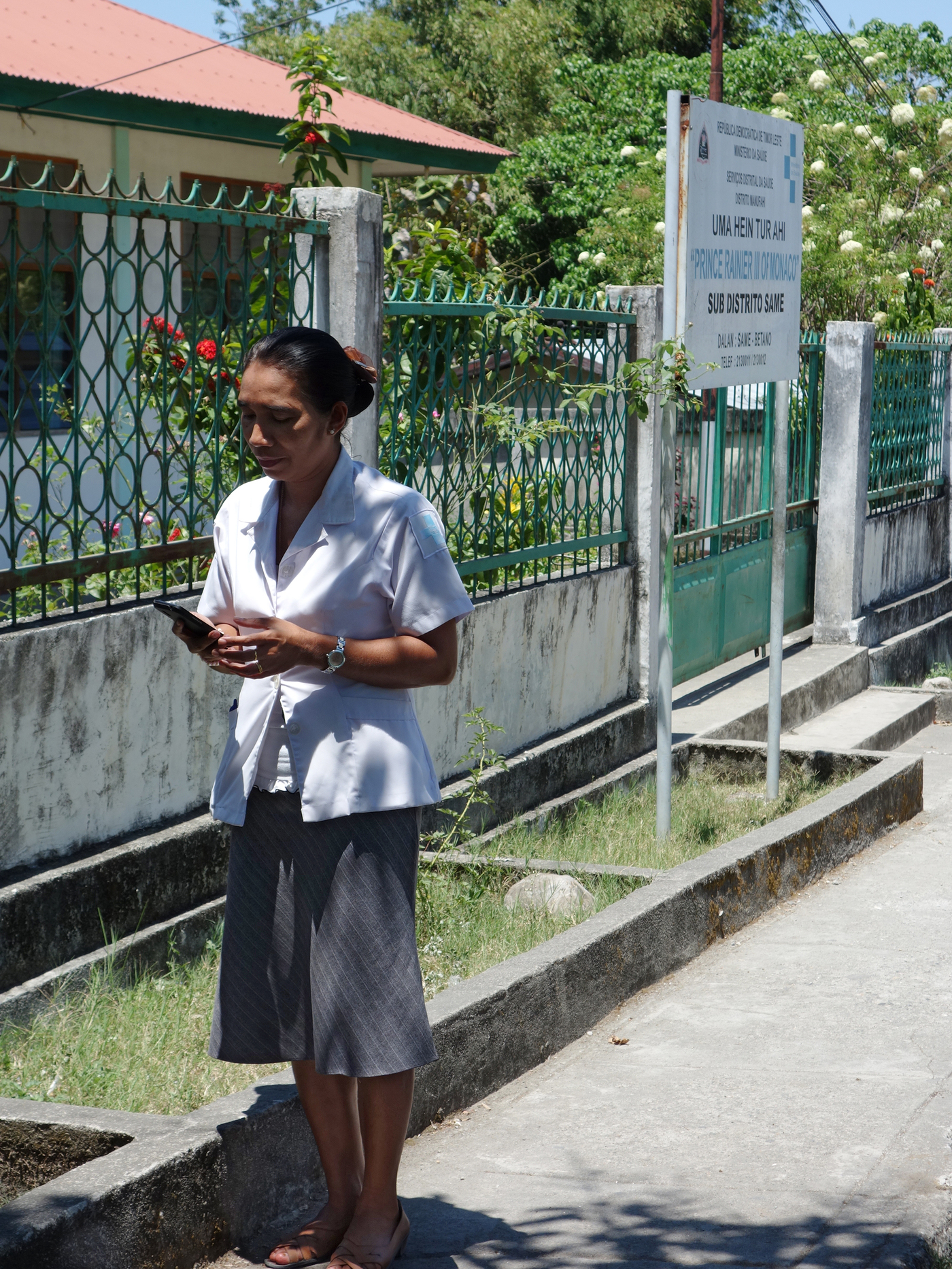 Midwife Mana Justa checks her phone outside the maternity ward in the village Same. The Liga Inan service allows mothers and midwives to send short messages to each other when the mothers have questions.

Then Barnabee left the capital city. And the scenery changed dramatically.

Mountains and hills stretch for miles and miles in the rural southern part of Timor-Lest. There are only a few villages sprinkled throughout. And there's only "a little bit of a road," recalls Barnabee, who spent three months there.

Barnabee, 31, was then a public health student at the University of Washington in Seattle. In Timor-Leste, she was working with the nonprofit Health Alliance International to figure out how well a new mobile health program was working.

The service is called Liga Inan, which roughly translates to "connecting mothers" in the Tetum language. Liga Inan allows pregnant women and new moms to talk with midwives using cellphones. Then the women don't have to walk miles along unpaved dirt roads and over mountains when a problem arises.

Barnabee spent much of her time at a health center in the town of Same. Most of the midwives there liked the service, Barnabee says. They could better monitor the health of mothers and their babies, as well as gauge when a personal visit was necessary.

Volunteer Recap: Why Wearing The Right Shoes In Rio Matters

On her free time, Barnabee spent her days at nearby markets and talking about music with her translator. We asked her about the highlights of her stay. The interviewed has been edited for length and clarity.

With all the mountains and hills separating towns, how do people get around?

They don't have many buses from town to town, but they have trucks with open backs. I think the trucks mostly transport goods from the larger markets, but they also serve as a bus that can be stopped at any point. People would hop on [and sit in the back], and just tap when they wanted to get off. Then they paid. 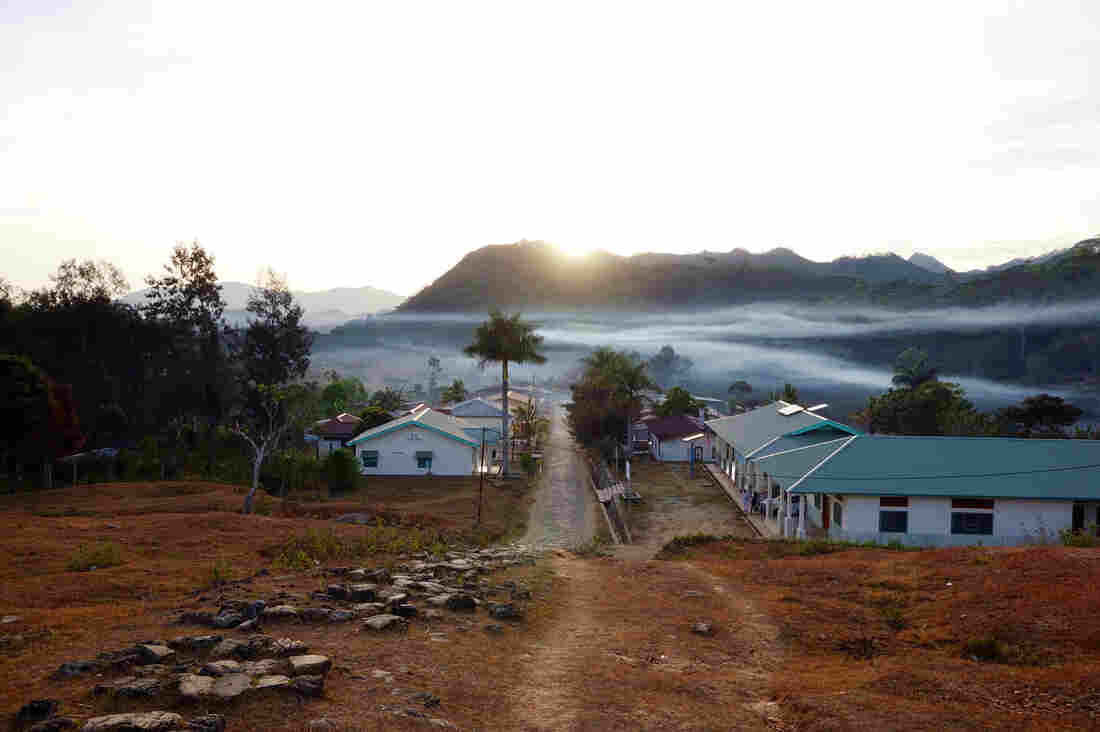 In the rural Manufahi district, health centers, like this one in the Turiscai village, are using a mobile health program to connect expectant mothers and their midwives. Courtesy of Gena Barnabee hide caption 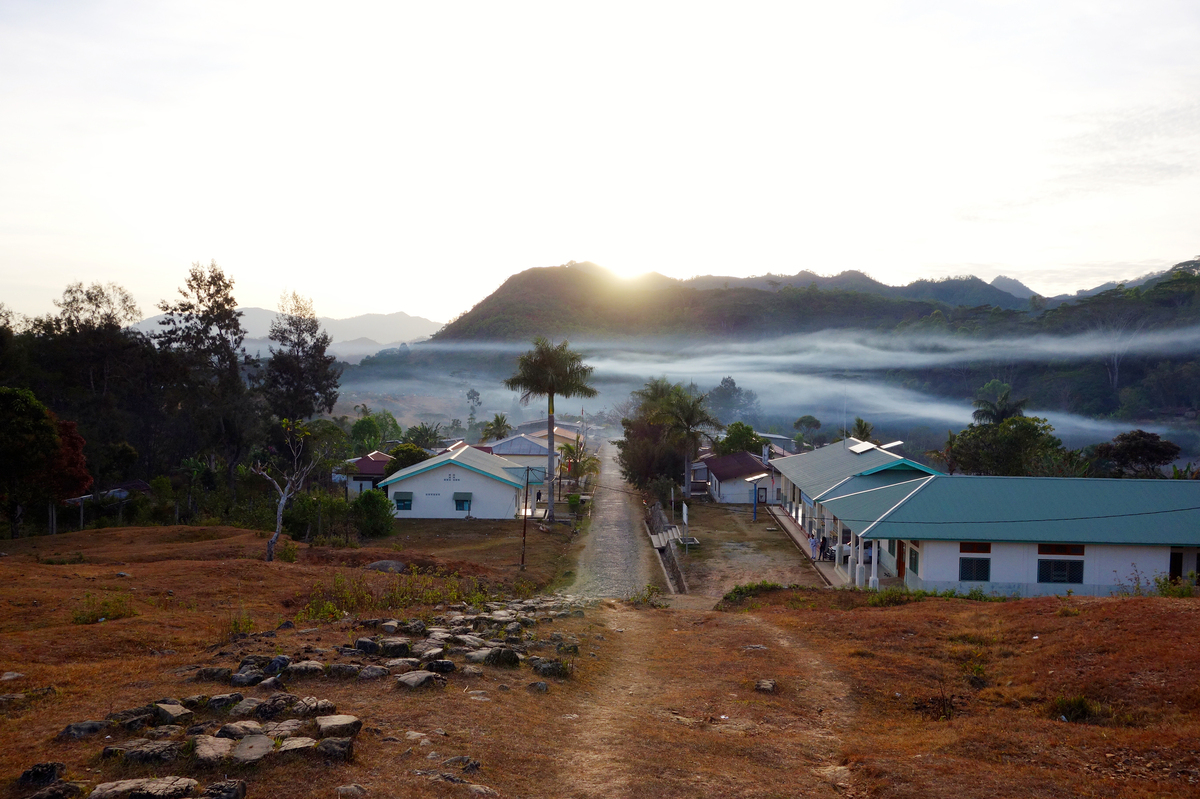 In the rural Manufahi district, health centers, like this one in the Turiscai village, are using a mobile health program to connect expectant mothers and their midwives.

One time my translator and I took one of those trucks from Same to Betano, a tiny village near the southern coast. Everyone was looking at me like I was very strange. One man was looking at me the whole time — not with any malice. But probably what was running through his head was something like, "What on Earth is this woman doing on this truck?" I don't think it's common to see Westerners on this kind of transportation.

Any memorable sights at the market?

Old men would walk up and down the street in their traditional clothes, and they would just be holding their roosters, like people in the U.S. carry around their small dogs. The roosters are prized for cock fighting. It's really big in Timor-Leste.

Who was your favorite friend on the trip?

My translator. He was studying English at the University in Dili, and we spent a lot of time together. He was a young guy, about 22. He loved talking to me about English and pop culture. He was kind of like a sponge, wanting to take up as much learning that he could.

Did you pick up any new habits?

When you walk down the street people shout, "Hello, good morning," and they'll say your name and ask you, "Where are you going?" It's not meant to pry. It's a greeting. So it's customary for you to say, "Hi I'm just taking a walk," or "I'm going to the market."

I had introduced myself as Gena to people living near me, and as I walked down the street, they would say "Gena! Gena Barnabee!" I was really confused because I didn't tell them my last name. About a week later, this happened again, and it struck me: They weren't saying "Gena Barnabee." They were saying, "Gena ba nebee," which means "where are you going?"

A takeaway from your trip?

In the U.S. you talk to people if you know them or if they're your friends. But I find that in many other countries people are much more likely to speak with strangers and greet anyone walking by. Almost anywhere in Timor Leste, I would get a simple greeting, like "Hello, how are you? I hope you have a great day."