Accessibility links
Proper Sanitary Pads Are Keeping Girls In School : Goats and Soda Teenagers in a Ugandan village would skip school every month because they didn't have sanitary pads. A new project called AFRIpads is starting to solve that problem. 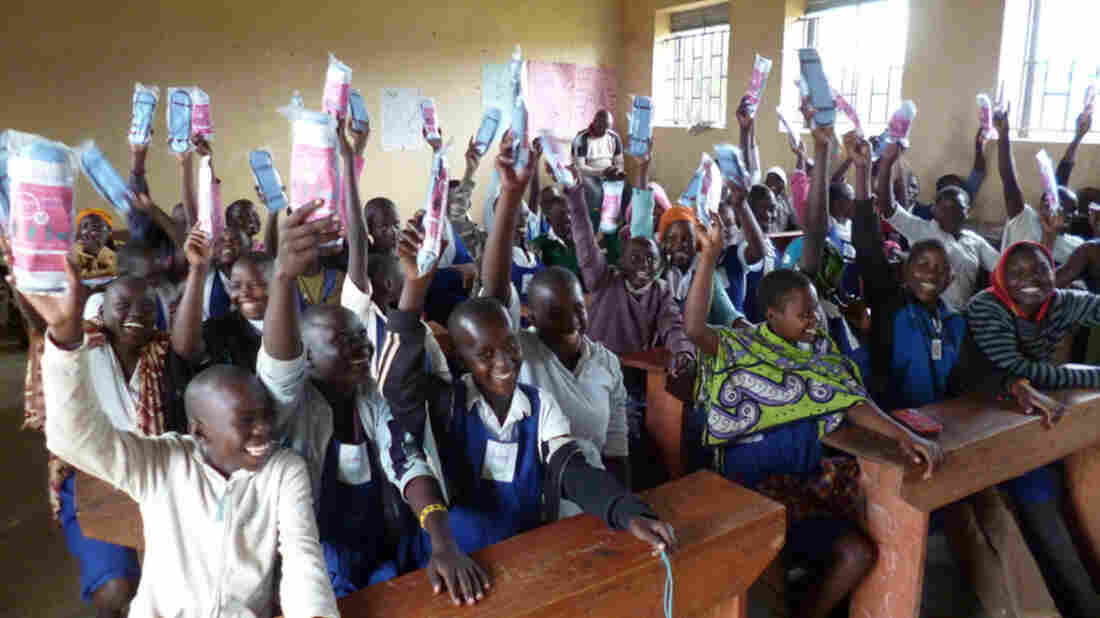 Afripads, handed out in a kit that includes a carrying case, are credited with making girls feel comfortable coming to school when they have their period. Courtesy of AFRIpad hide caption 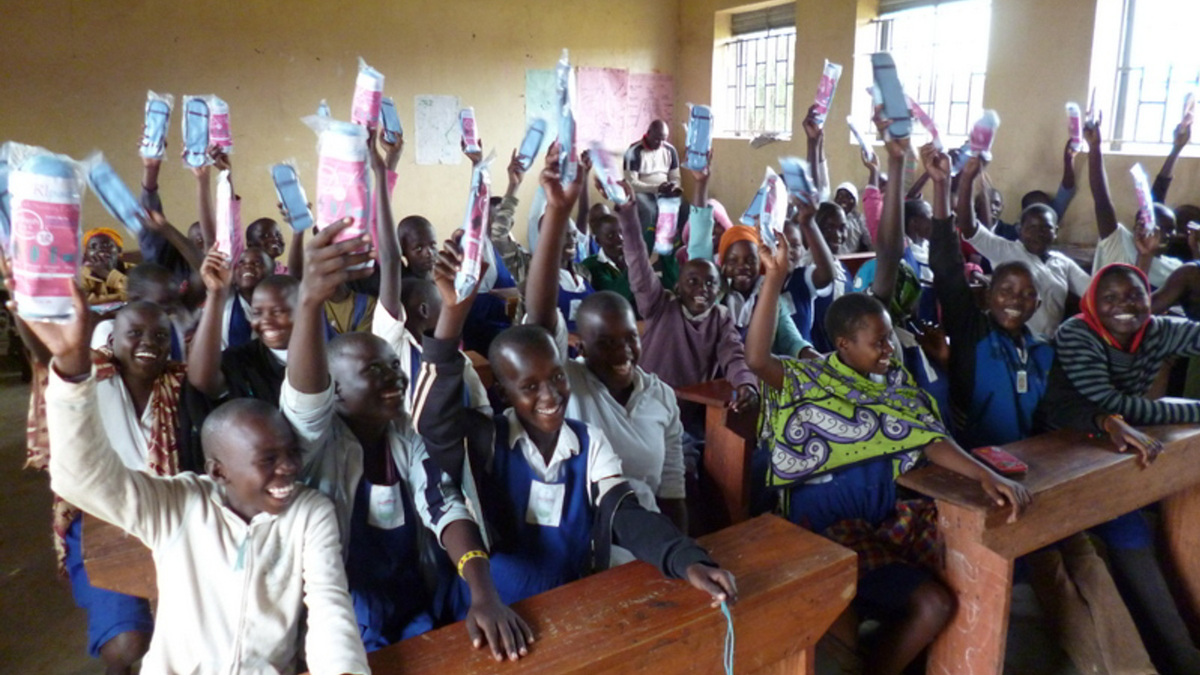 Afripads, handed out in a kit that includes a carrying case, are credited with making girls feel comfortable coming to school when they have their period. 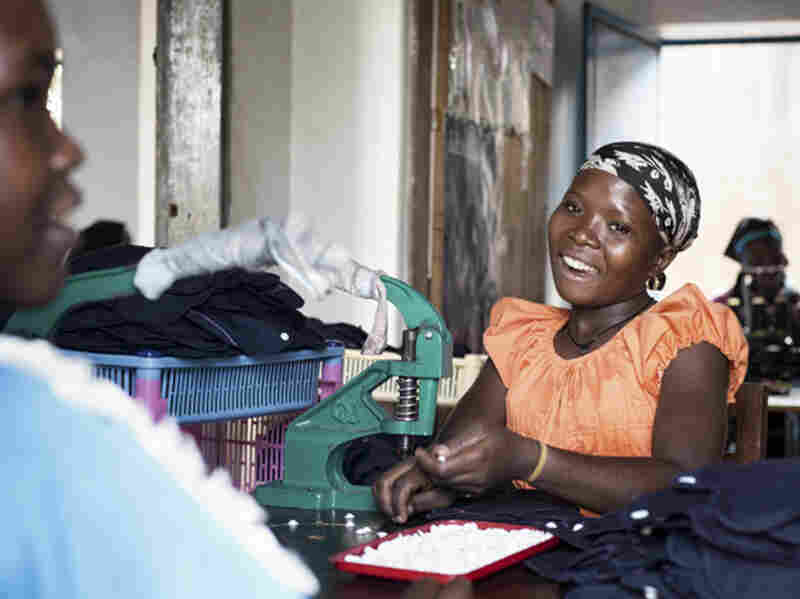 Some 150 employees, the vast majority of them women, make the cloth sanitary pads. Courtesy of AFRIpad hide caption 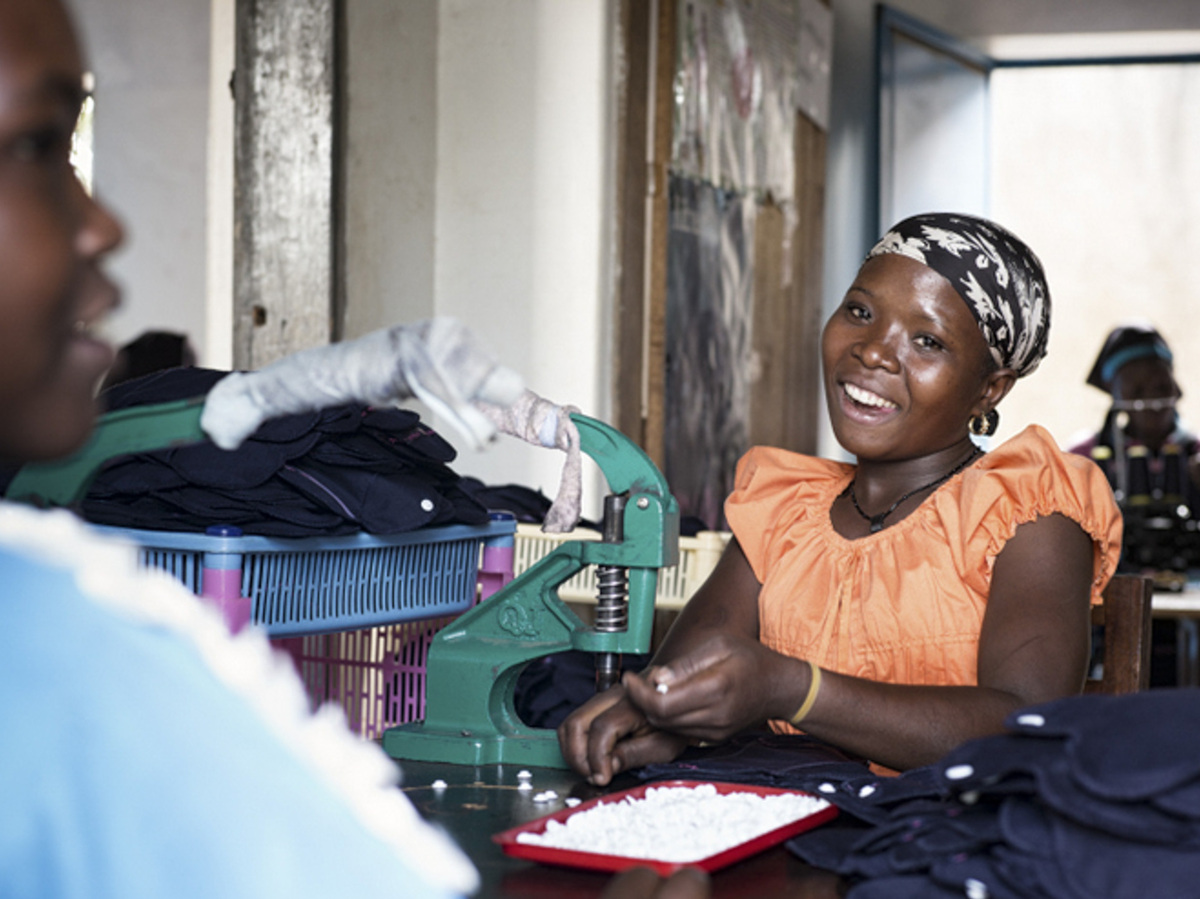 Some 150 employees, the vast majority of them women, make the cloth sanitary pads.

How do you cut the school dropout rate for girls in a remote pocket of Uganda?

And how do you create jobs for village women?

The answer to both questions: sanitary pads.

The story begins in 2009, when 26-year-old Sophia Klumpp and her husband-to-be Paul Grinvalds – she's from the U.S., he's from Canada — began working for a nonprofit group in a rural village in Uganda. Klumpp saw that many of the teenagers in school used threadbare rags or tufts of mattress stuffing as sanitary pads. The embarrassment and the fear of an accident kept many of them away from school for the four or five days of their period each month.

That set a chain reaction in motion. Girls who are unable to keep up with school work are more likely to drop out, soon marry and have children. Yet they don't have the skills (or the time, if they are caring for young children) to make additional money for their family. By contrast, Klumpp says, "Every extra year a girl stays in school, she has a higher earning potential, and for every year of gainful employment, [is] more likely to engage in family planning."

In 2009, the couple started a pilot project for AFRIpads. They wanted to provide low cost sanitary pads that would allow girls and women to go about their lives with greater freedom and dignity. Their goal, too, was "to start a business that would create employment opportunities for women."

At first, five women, ages 18 to 20, each sewed about three cloth pads a day — pads that could be washed and re-used. "Then word spread and people started knocking on the door," Klumpp says. Schoolgirls, young women, the school headmistress and the headmaster, too, all wanted to buy AFRIpads. Today, they're producing well over 30,000 AFRIpads a month, says Klumpp, "and our volume is growing."

The number of employees has also grown — to 150, 135 of whom are women. And they are all part of the formal economy. "They have bank accounts at Barclay's, have savings accounts, are saving for the government pension plan" and are paying taxes, says Klumpp.

AFRIpads remains based in the village of Kitengeesa, located in what Klumpp describes as "a remote little pocket" in Uganda, near the western shores of Lake Victoria and not far from the Tanzanian border. "We deliberately put our roots down here," says Klumpp, because they wanted to "create a rural economy specifically targeting women."

As volume grew, so did the number of locations at which the employees manufactured the pads with treadle-powered sewing machines. (Electricity did not come to the village until this past December.) Later this year the couple plans to begin construction of a 1,000-square–foot building to consolidate production in one space.

Through donations and partnerships with organizations, AFRIpads are now sold and distributed in other parts of Africa. The pads are packaged and sold in kits that include holders and a carrying bag as well as the pads themselves. And they have "transformed girls' lives," says Jinny St.Goar, the U.S. project director for Mali Nyeta, a nonprofit grassroots organization dedicated to improving education and building stronger community in a rural area of Mali that has distributed 300 AFRIpad menstrual kits,

In addition to helping keep girls in school, St. Goar says that just having the pads can act as a conversation starter to help girls and their moms talk about family planning, staying in school, delaying marriage past adolescence and child-bearing.

Klump estimates that within the next two weeks she and her husband will attain what seemed an impossible dream when they began in 2009: distributing AFRIpads to 500,000 girls and women through the NGOs that have purchased them.

"We're over the moon," she says. "The period is the most common experience women share, so why should so many of the world's women experience it in isolation and [be] unable to go to school or go to work or just freely do household activities?"