Accessibility links
An Anti-Rape Activist Raises Questions About "India's Daughter," Airing On PBS : Goats and Soda The documentary about the rape and killing of a young woman airs on PBS tonight. Kavita Krishnan says it has its strengths but she has concerns — starting with the title.

A Women's Rights Activist Has Mixed Feelings About 'India's Daughter'

A Women's Rights Activist Has Mixed Feelings About 'India's Daughter' 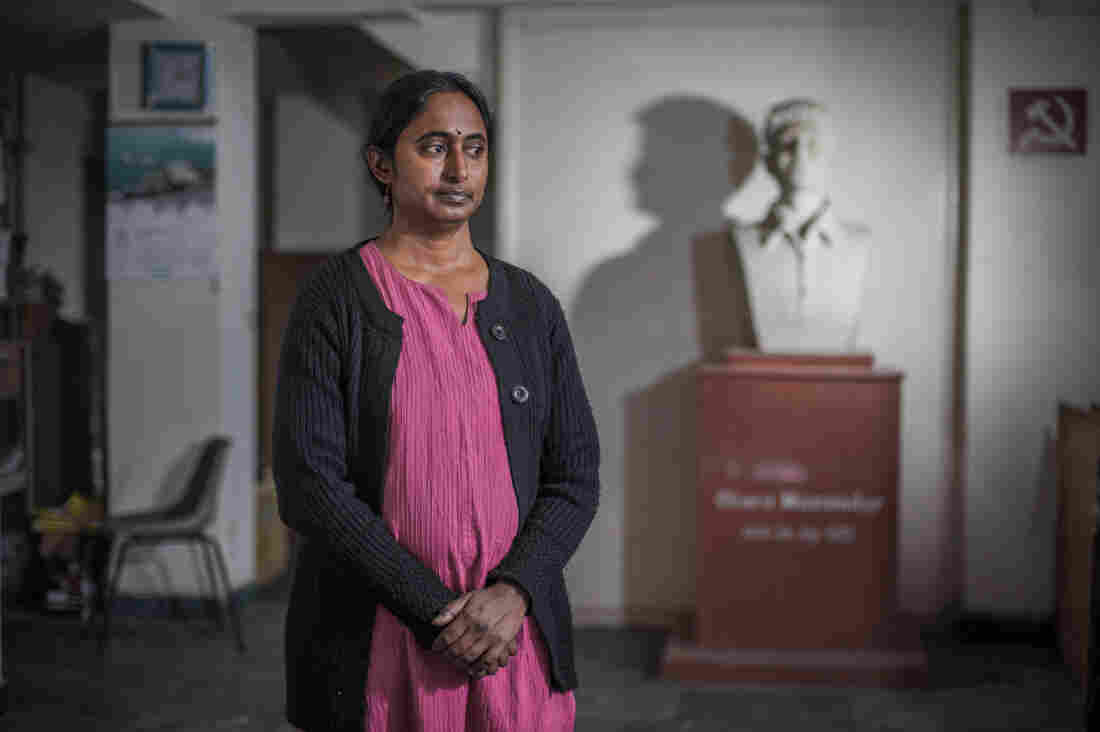 Kavita Krishnan, secretary of the All India Progressive Women's Association, photographed in the offices of the Communist Party of India. The bust in the background depicts Charu Majumdar, a Communist revolutionary from Bengal. Poulomi Basu/VII Mentor for NPR hide caption 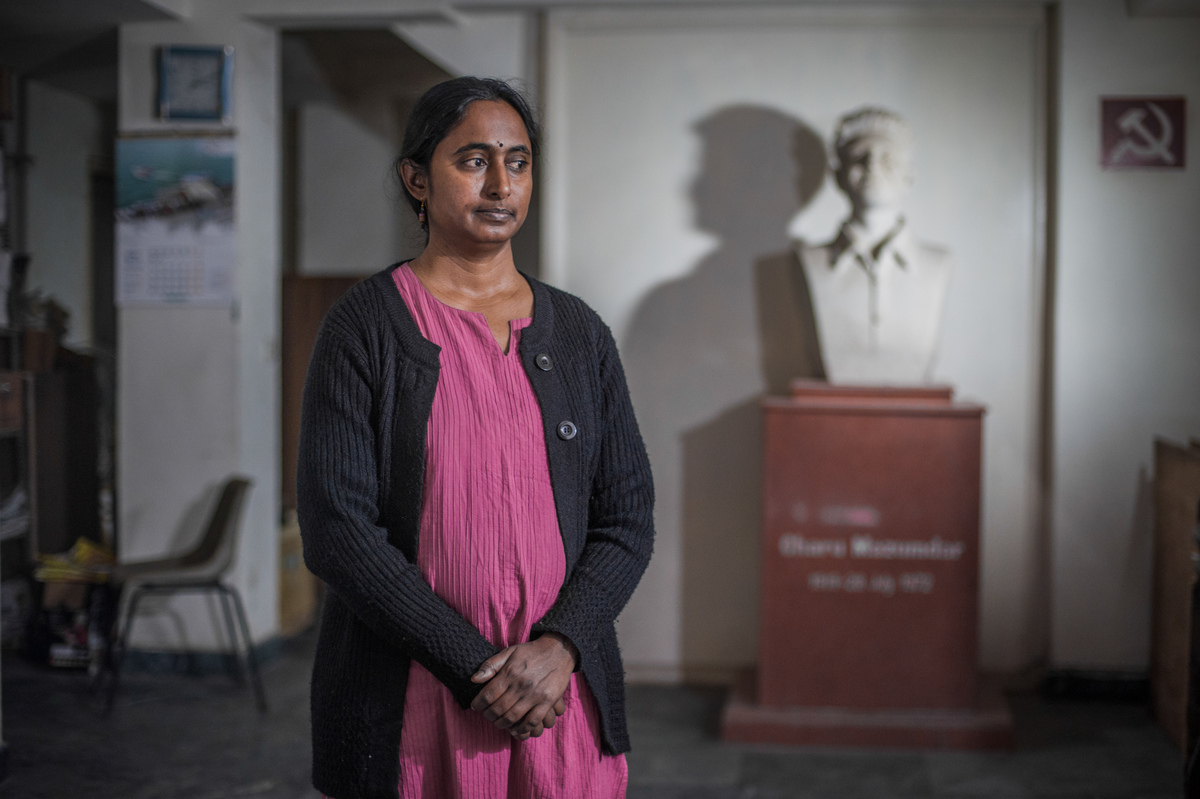 Kavita Krishnan, secretary of the All India Progressive Women's Association, photographed in the offices of the Communist Party of India. The bust in the background depicts Charu Majumdar, a Communist revolutionary from Bengal.

Kavita Krishnan has been a leading activist in the protests that took over the streets of Delhi after the rape and killing of a 23-year-old student in December 2012.

'India's Daughter' Opens In U.S. After Being Banned In India

'India's Daughter' Opens In U.S. After Being Banned In India

She appears in India's Daughter, a documentary about the crime that airs on PBS tonight at 10 p.m. ET on the "Independent Lens" series.

But Krishnan raises questions about the film, starting with its title. Krishnan, a leader in India's Communist Party and secretary of the All India Progressive Women's Association, spoke with Goats and Soda about her views on the film and about the women's movement in India, which gained support when thousands came out to protest the rape.

Does the film have its strengths?

Yes, one of the strengths of the film is that it shows how the parents have been coping with the loss of their daughter. She comes to us through their memories. That is moving and undoubtedly important. But the thing is that we are more than what we are seen as by our parents. There are aspects of our life that we don't talk about with our parents. And I think in seeing her only as a daughter, this film has made a mistake.

Does that mean you don't like the title of the film?

Do you think the film treats the victim fairly?

In the film we are told she had permission from her parents to go out that night. I wonder why the filmmaker thought this was important. After all she was an adult woman. Why should she seek permission? Would she have been any less of a victim had she not taken permission, had she been unapologetic about having the right to go out?

In your opinion, does the film perpetuate the idea of blaming the victim?

It has an interview with Sheila Dixit, the former chief minister of Delhi, talking about discrimination against women in our society. Dixit is actually one of those who is known to have made victim-blaming remarks herself when she was the chief minister. When a journalist was killed late in the night in Delhi, she actually said, "Why was she out at 3 o'clock at night — that's too adventurous of her!"

What do you think of the way the film depicts men of India?

What this film does basically is show the mindset of the rapist and his lawyers. But it doesn't highlight those who are on the side of law and order and morality.

In the process, it ends up profiling Indian men from poor and deprived backgrounds as potential rapists. It doesn't show you that men from such backgrounds may not be rapists — many of them are not.

Some people have said that the film glorifies the rapist and could encourage others to emulate him. Do you believe that?

Showing rape culture or victim blaming or violent statements by [the convicted rapist] and his lawyers does not mean [the film] will result in similar incidents. But I think there is a way in which the interview has been presented and the way he has been framed that [may make people fascinated by] him as a man.

Someone told me that they heard a man who watched this film say, "Look at how cool he looks." So there's that aspect and the fascination for the gruesome details of the incident, which we kept telling journalists to stop focusing on. This is not helpful and shouldn't be done. The horror of rape doesn't just lie in graphic details of how the rape was committed.

Why do you think this particular rape mobilized such a huge response?

In retrospect it's always difficult to make sense of why this particular incident was the catalyst.

This young woman was like a lot of other young women in Delhi, who are struggling migrants. So a lot of people empathized with her situation. I think there was also a larger anger beyond this particular case [at] sexual violence in general and at the apathy of the police, authorities and politicians.

What was significant about the movement was that there were thousands who moved away from demanding the death penalty and castration of these men. They moved away from the temptation to be a lynch mob and moved toward introspecting about violence against women in other contexts and other places, such as marital rape or by the Indian army.

What has been the impact of the December 2012 demonstrations?

One of the most important things about the December 2012 anti-rape movement was that it questioned [attitudes that are tolerant of rape] and victim blaming and the denial of autonomy to women in a very wide spectrum.

It demanded freedom from caste constrictions, freedom from parents and brothers, and it also castigated politicians for their victim-blaming remarks.

The December 2012 movement showed us that far beyond the ranks [of activists] there's a wider general public which is willing to respond to these concerns and, not only willing to get angry about rape, but actually willing to come out on the streets and make themselves be heard, make themselves uncomfortable.

That is extremely significant.

Editor's note: An earlier version of this story was published on March 10.