Accessibility links
The View From A Muddy Field In China: Women's Rights, In 1995 And Now : Goats and Soda Anne Marie Goetz was one of 47,000 who attended the landmark Beijing conference. Twenty years later, she thinks it might be risky to hold an event like that today.

The View From A Muddy Field In China: Women's Rights, In 1995 And Now

The View From A Muddy Field In China: Women's Rights, In 1995 And Now 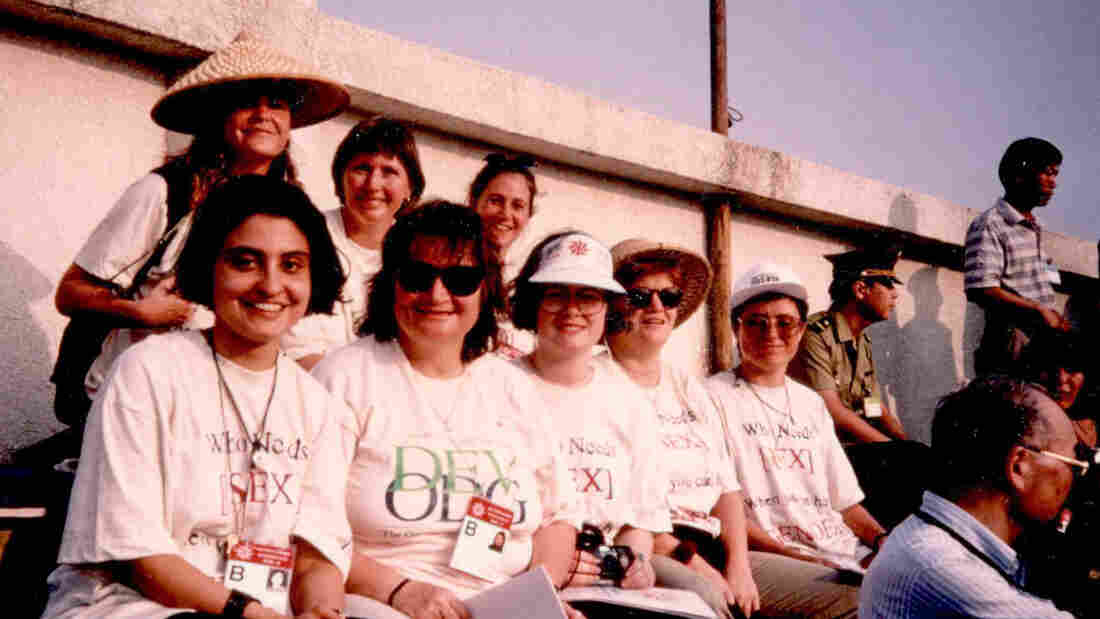 Anne Marie Goetz (back row, wearing traditional Chinese hat) takes in the welcoming ceremony for the 1995 U.N. conference for women, held at a stadium in Beijing. Courtesy of Anne Marie Goetz hide caption 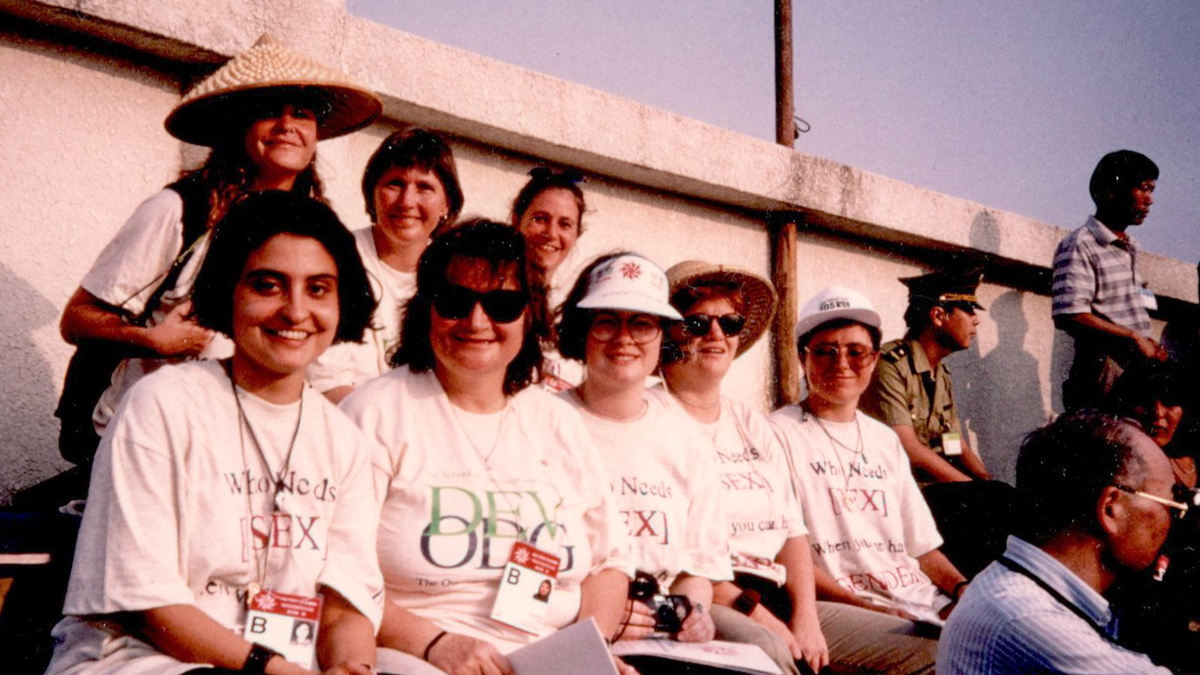 Anne Marie Goetz (back row, wearing traditional Chinese hat) takes in the welcoming ceremony for the 1995 U.N. conference for women, held at a stadium in Beijing. 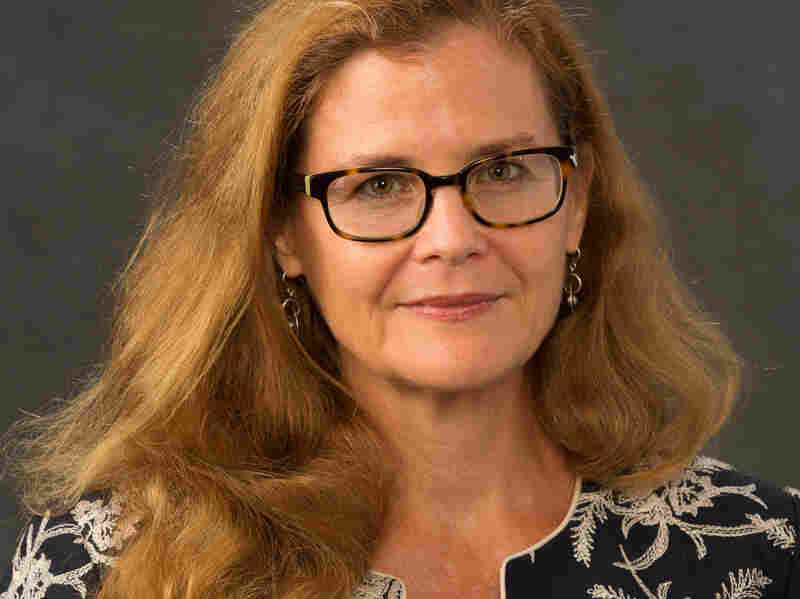 Anne Marie Goetz: "I wish we could bottle the spirit of the [Beijing] meeting." Courtesy of Mark McQueen/NYU hide caption 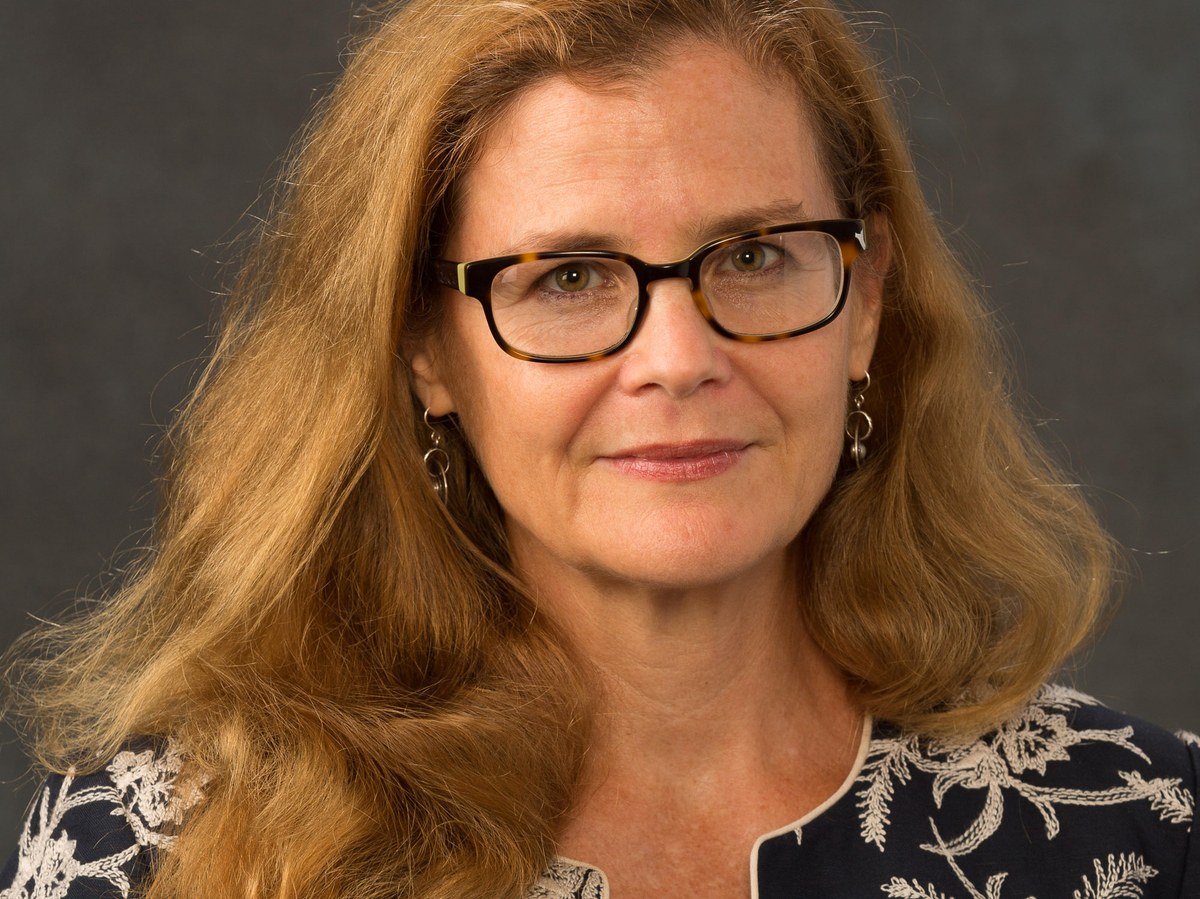 Anne Marie Goetz: "I wish we could bottle the spirit of the [Beijing] meeting."

Midtown New York City is buzzing with thousands of women's rights activists. They're in town for a milestone session of the United Nations Commission on the Status of Women, which runs through the end of next week.

The commission meets yearly. But this session has turned into a major event because it comes 20 years after world governments adopted the landmark "Beijing Platform for Action" on women's rights at a world conference on women in the Chinese capital. As the commission takes stock of the — mostly limited — progress on women's rights since then, the mood is decidedly bittersweet. NPR's Nurith Aizenman spoke with New York University professor Anne Marie Goetz, who describes the Beijing conference as "life-changing" but who worries changes in the international political climate might make it too risky to hold another conference like that today. The interview has been edited for length and clarity.

Back in 1995, you were a 35-year-old lecturer on development studies, one of 47,000 people who attended the Beijing conference. What did you find when you arrived?

I wish we could bottle the spirit of the meeting. There was an incredibly vibrant and diverse and just massive showing by women's organizations from around the world.

We were exiled to a very muddy field about an hour's drive away from Beijing — which was awkward because normally during international conferences, civil society organizations have the ability to lobby national governments. The decision [to confine participants to that field] was taken by the Chinese government because having this kind of open, transparent dialog was, well, a little counter to their culture.

But being exiled built an even stronger sense of solidarity and determination to make sure the agreement [reached by the governments at the conference] went as far as it possibly could. And the scene in the field was an eye-opener. You had more than 30,000 individuals in makeshift tents — running workshops, dancing, doing art projects, holding protests. And these weren't just elite feminists. There was a huge amount of money raised to bring people. So you had women who had never been on a plane before, women coming in from conflict zones. And because it was all in this large, open terrain you could dip in and out of workshops, you could eavesdrop, and you would constantly stumble across demonstrations. Everything was in your face and you had to learn about it. For a young feminist like me it was fantastic.

Was there a particular moment that stands out?

At one tent there was this woman from Bangladesh giving testimony about her daily life — about how what I would consider really serious violence was a part of her daily life. Not just domestic violence but violence by her landlord. She would speak and then one after another women in the audience would stand up and say this happened to me, too. I don't know that I was aware until then just how pervasive and universal violence is toward women and girls.

The Beijing conference was the fourth of a series of world conferences on women that began in 1980. Like the previous conferences, Beijing ended with the adoption of a platform. What made it different than those that came before?

The Beijing platform was more wide-ranging and comprehensive. It included issues that had never been addressed before and addressed others in greater depth: like violence against women, economic equality. There was also more attention to adolescent girls. That's a hot button issue in international negotiations because any discussion of adolescent girls raises issues of sexuality and knowledge and control over their bodies. And though there were limitations in the way it was addressed, adolescent girls were at least put firmly on the international women's rights agenda.

Then there was the fact that the member states faced down the Vatican. The Vatican wanted the word gender left out of the platform. [Vatican officials expressed concern the term suggested that sexual identity was malleable and wanted the biological term "sex" used instead.]

It started a huge battle and had allies among Central American countries. But we took it on and the international community stuck to its guns.

But you believe the platform had flaws.

Yes, it was not a perfect document. It's a set of aspirations, but it sets no specific targets and has no timelines for meeting them. I think everybody's expectation was that there would be more conferences to set regional targets.

But there never was another world conference on women by governments, so the platform was never modified to include targets or timelines, let alone additional goals. Instead the U.N. limited itself to monitoring progress toward the goals in the 1995 platform through the annual reviews done by the Commission on the Status of Women. And for all the fanfare, that's what this year's meeting of the Commission in New York is about. What happened to all that momentum out of Beijing?

The next five-year point after Beijing was in 2000, and at that time the international community was focused on holding a world summit to set the millennium development goals. It had been everyone's expectation that the platform [adopted at Beijing] would inform the global standard setting on MDGs. But the MDGs ended up being designed in a very closed process. Gender equality did not feature prominently. Women's empowerment was reduced to getting more girls in school, for instance. Transforming gender relations just was not covered. So the MDGs took everyone in a different direction. And we all started to understand that by 2005, 10 years after Beijing, when there was very little discussion among governments of holding another women's conference.

And the world was changing as well.

By 2005 it was becoming clear that some countries were becoming more conservative. In 2012, when the U.N.'s Secretary General raised the issue of holding a fifth world conference on women — and Turkey and Qatar offered to host — there was a very strong sense among a lot of countries, and from many feminists, that it was just too dangerous to have another international meeting because the opponents of women's rights have become stronger and better organized. For example, this year, well in advance of the U.N. Commission's meeting in New York, a group of 11 countries issued a statement calling themselves the "Friends of the Family Group." It's organized by Belarus and includes Catholic countries from Latin America, Muslim countries, a mix of small and large, East and South. And of course a silent partner in this is the Holy See. They're working to delete references to adolescents' sex education, to same-sex orientation, and anything to do with sexual rights as opposed to sexual health. 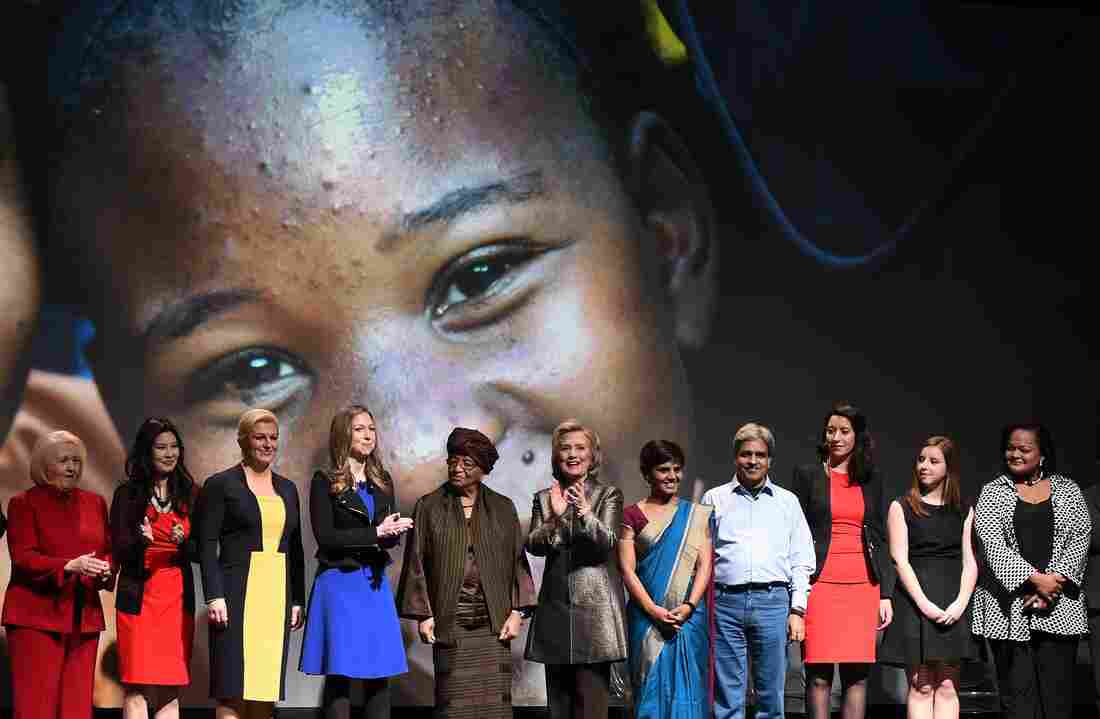 Hillary and Chelsea Clinton flank Liberian President Ellen Johnson-Sirleaf (in brown headwrap) at an event held this week in conjunction with the U.N. Commission on the Status of Women. DON EMMERT/AFP/Getty Images hide caption 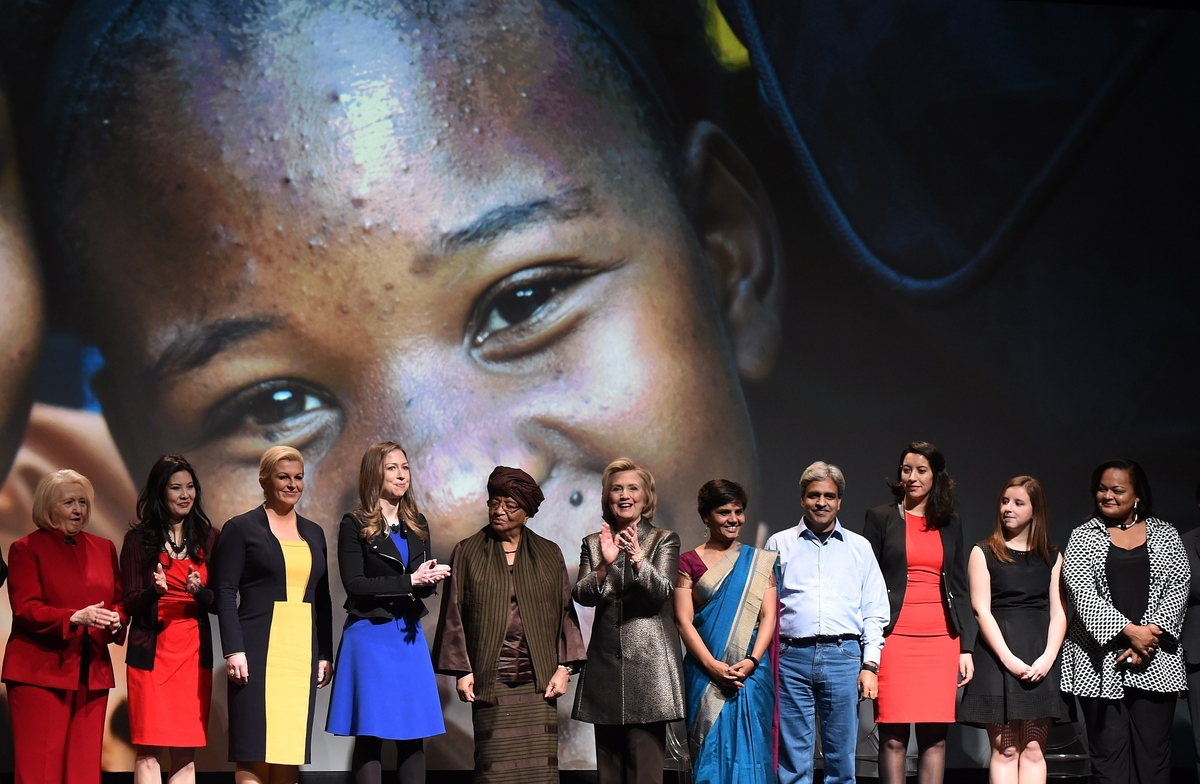 Hillary and Chelsea Clinton flank Liberian President Ellen Johnson-Sirleaf (in brown headwrap) at an event held this week in conjunction with the U.N. Commission on the Status of Women.

What do you see as the purpose of this year's gathering of the U.N. Commission?

Everybody is a bit baffled because all the negotiated work was done in advance. The Commission pre-negotiated a declaration that they issued on Monday, the first day of the session. And it's a very carefully worded document that, basically, how can I put it, looks like it's stating the minimum that can be said about women's rights. It doesn't advance us on where we were 20 years ago in any way. It doesn't even take note of the many threats to women's rights — climate change, religious extremism, serious demographic changes, mounting attacks on women human rights defenders. It doesn't address the unfinished business of Beijing — which is sexual rights, full reproductive rights, issues around sexual orientation. It's essentially an affirmation of the Beijing platform without elaborating on further commitments. It's very disappointing. But the negotiators will tell you that this is the maximum they could get agreement on. And for them to say this, in 2015, is very surprising and very worrying.

Is it time for governments to hold another world conference on women — not just another meeting of the Commission on the status of women to review progress but a full-fledged conference to update and sharpen the goals in the Beijing platform?

I genuinely don't know whether it's a better tactic to lay low or to fight hard. The broad view is that it's really risky to open up any further questions on women's rights for global negotiation. But I'm also hearing from grass-roots activists: We're angry and defiant and we can do better than this.

Some have argued for holding a meeting of civil society groups without getting governments involved. What's your view of that?

U.N. Report: No Country Has Achieved Equality For Women

I think there's no point having a global jamboree for the fun of it. An international meeting is really a pretext to demonstrate the power of the gender equity lobby, to speak up for populations that haven't had their views expressed. And for that, there has to be stakes for governments. The stakes have to be changing international practices.

That's why I have been advocating for another global women's conference. The world has changed so much in 20 years that I think with social media and a new interest of young people that we would be able to handle it in a way that would not result in a step backwards. I think we can take this on.