Accessibility links
Egyptian Singer, Meet Burundi Bassist. Play Among Yourselves! : Goats and Soda The musicians who live in countries along the Nile rarely got to meet — until the Nile Project came along. Now they learn from each other, make records together and are currently touring the U.S. 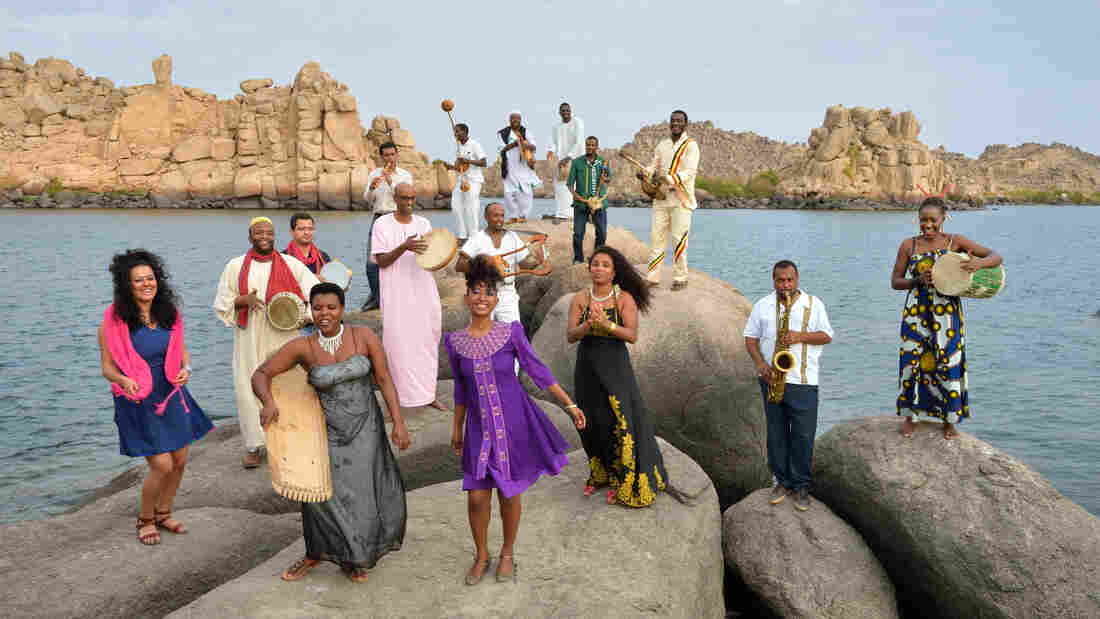 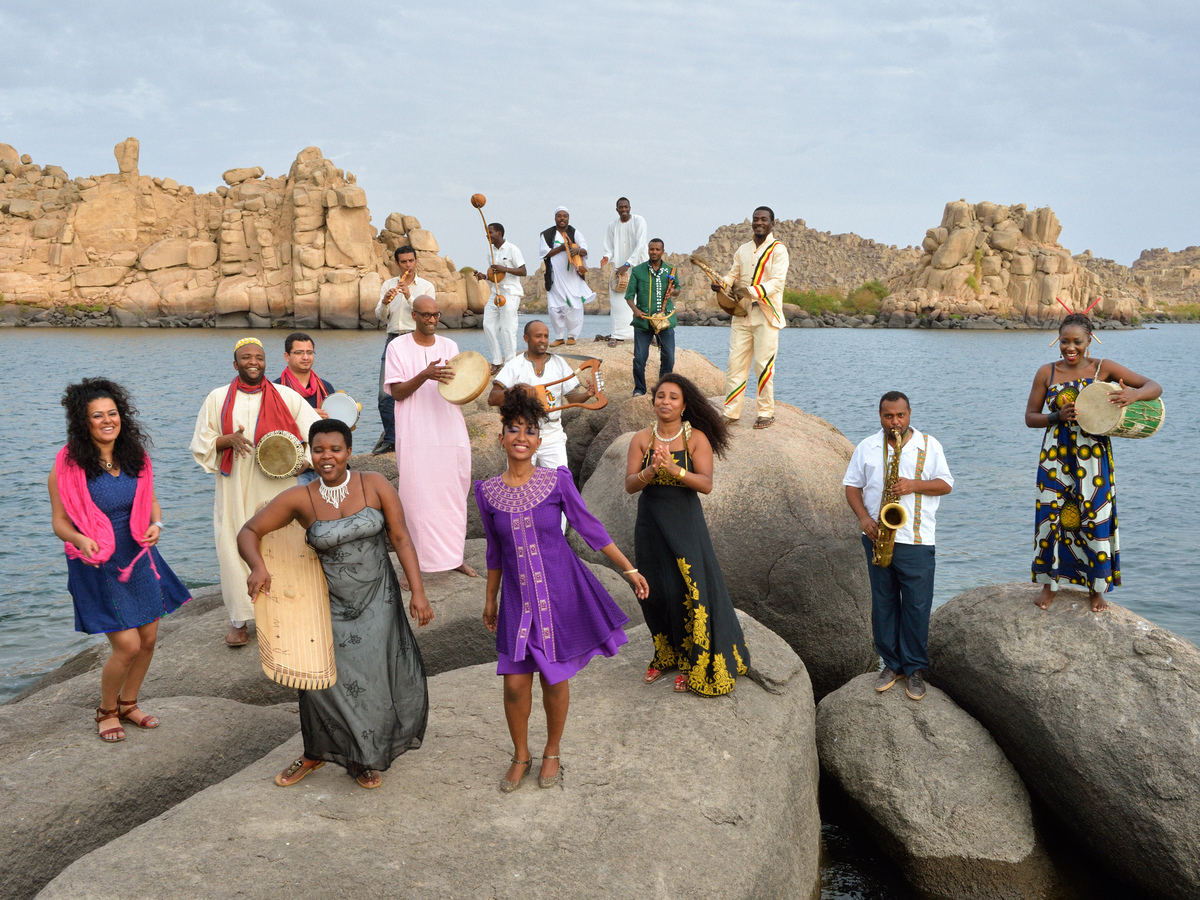 The Nile Project in Aswan, Egypt.

Late one night, Dina el-Wadi, a singer and musician from Cairo, arrived in Kampala, Uganda. She'd come for a gathering of musicians who live in countries along the Nile River.

She went to bed and woke up to pure enchantment: "I found a very beautiful woman singing in the morning in a very, very, very magical way. So I said, 'Oh, who is this girl that's going to sing with us?'"

It was Selamnesh Zemene from Ethiopia. Dina was fascinated. The two singers began comparing traditional musical modes and vocal techniques, and right away created a song together.

They called the song "In Wonderland." 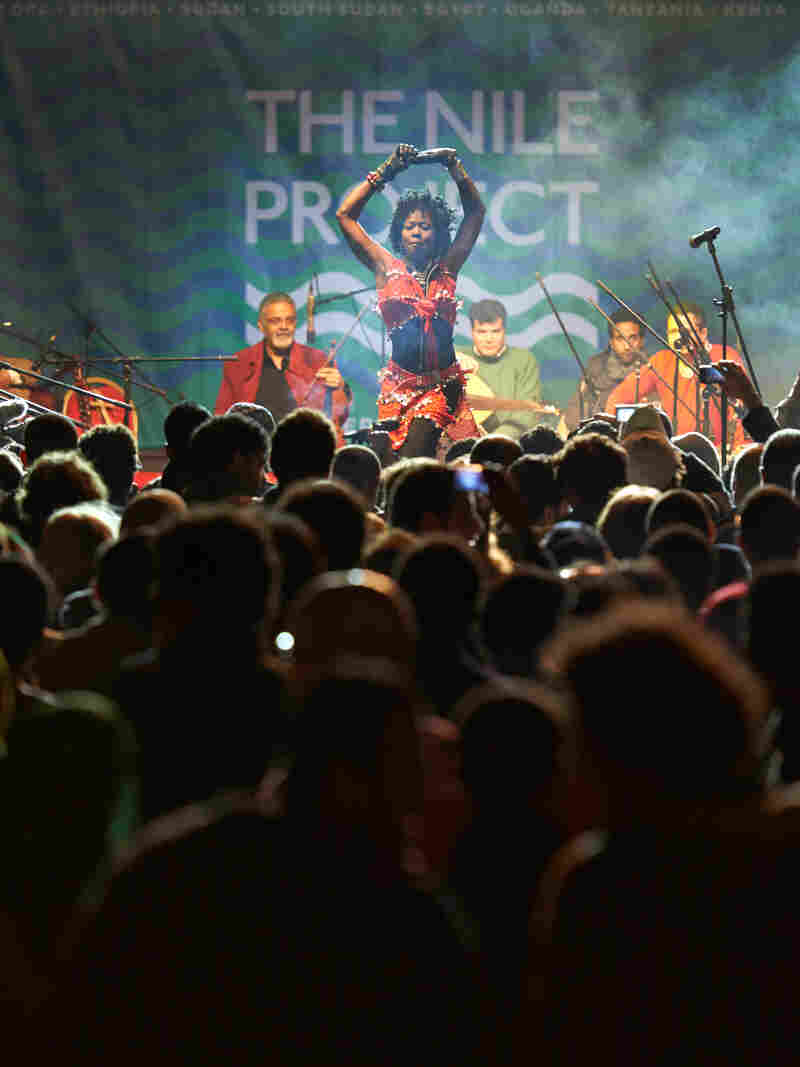 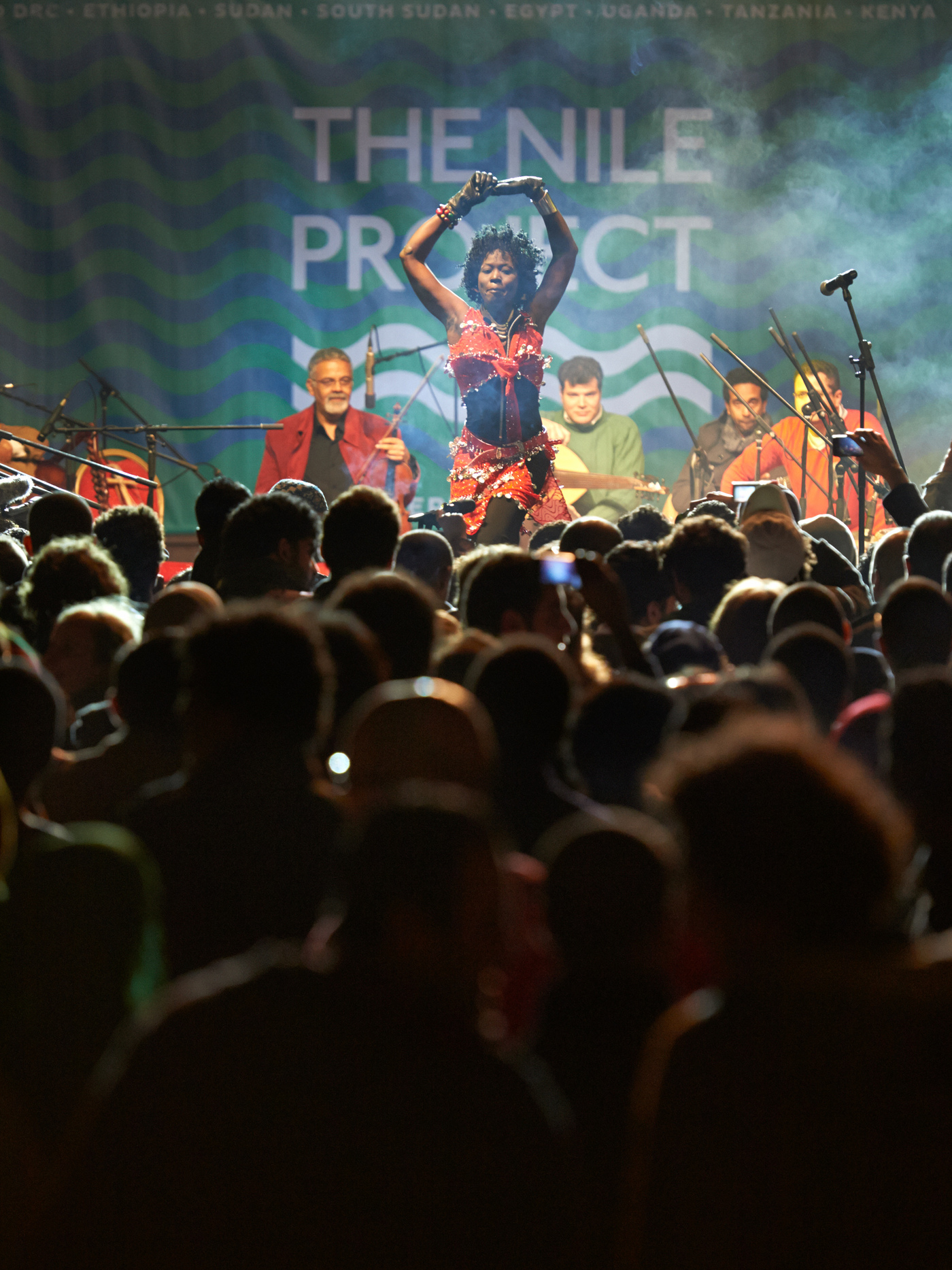 That's a great title, because the Nile Project creates its own wonderland.

"We started about 3 1/2 years ago to bring musicians from the 11 Nile basin countries to collaborate on music that merges many of their traditions and styles and instruments," says Egyptian ethnomusicologist Mina Girgis, co-founder and president of the Nile Project. "So we have musicians from Uganda, Kenya, Uganda, Burundi, Rwanda and from Ethiopia, Sudan and Egypt. And we are using this music to inspire a larger conversation about water and about all the challenges we face in the Nile basin."

If not for this initiative, the musicians would likely never meet.

"I didn't have any chance in Egypt to collaborate with African musicians," says Dina el-Wadi. "Usually we participate with European and American musicians. So for me, it was the first time to get in touch with the real scene now in East Africa. I start to love so much the African identity, because usually we are near to the Arab culture more than the African culture in Egypt. So as I love the Oriental stuff, I really love the African stuff now."

"In Africa, we don't listen to each other," he says. "In my country, you will listen easily to American music, to some African music like Kenya, Tanzania, Uganda and South Africa. That's it. So when I met these guys, and for the first time I heard Egyptian music I said, 'Wow.' And then after a year, I practiced this music, but I didn't feel good, because even though you've learned this, you have to feel it. Now actually I can say that I'm very lucky, I can feel it and I can enjoy this music and understand. So the Nile project for me has been like a school."

Performing in the Nile Project is a challenge. "No one leader here," says Dina el-Wadi. "We create together. So to be chorus sometimes, to be lead singer sometimes, to be a musician on one track [and] to be just listener. There was a lot of challenge. Artists have to negotiate different languages, different musical systems, singing lead on one song and being in the chorus on the next."

When they all come on stage together — 13 of the musicians are currently touring the U.S. — you'd never know.

Picture a stage full of musicians and singers surrounded by instruments both familiar and strange. In the center, a robed African woman plays a large, deep-toned lyre called inanga. Egyptian ethnomusicologist Mina Girgis is co-founder and president of the Nile Project. He says the inanga is a kind of invitation to a musical journey along the Nile.

"We start the show with Sophie Nzayisenga from Rwanda playing the inanga," says Mina Girgis. (That's a deep-toned lyre.) "And every musician comes on stage to join her. No one leaves the stage during the entire show. It's one band. So we have individuals playing many instruments. There are many dialogues that happen on stage. The songs kind of weave traditions. And some would sound Egyptian. Some would sound Ethiopian, but many are sounding like a collaborations among these different styles."

The hope is that the collaboration will not only to greater understanding but to better stewardship of the river itself.