Accessibility links
'How Unromantic It Is To Die Of Tuberculosis In The 21st Century' : Goats and Soda That's what a patient in Russia said a few years ago. In fact, 1.5 million people do die of the airborne infection each year. Here's what the world needs to do to fight this generally curable scourge. 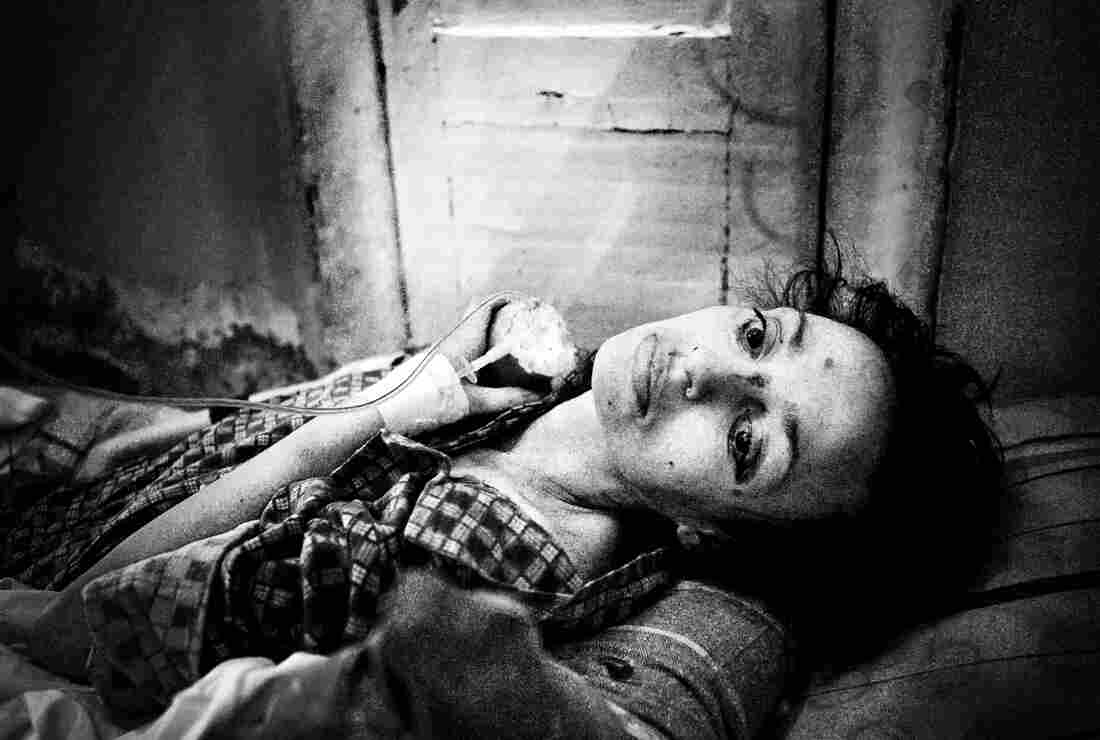 Polina, 37, rests in a hospital bed in St. Petersburg, Russia, in 2011. She is severely malnourished and suffers from numerous diseases, including tuberculosis, hepatitis C and HIV. Misha Friedman hide caption 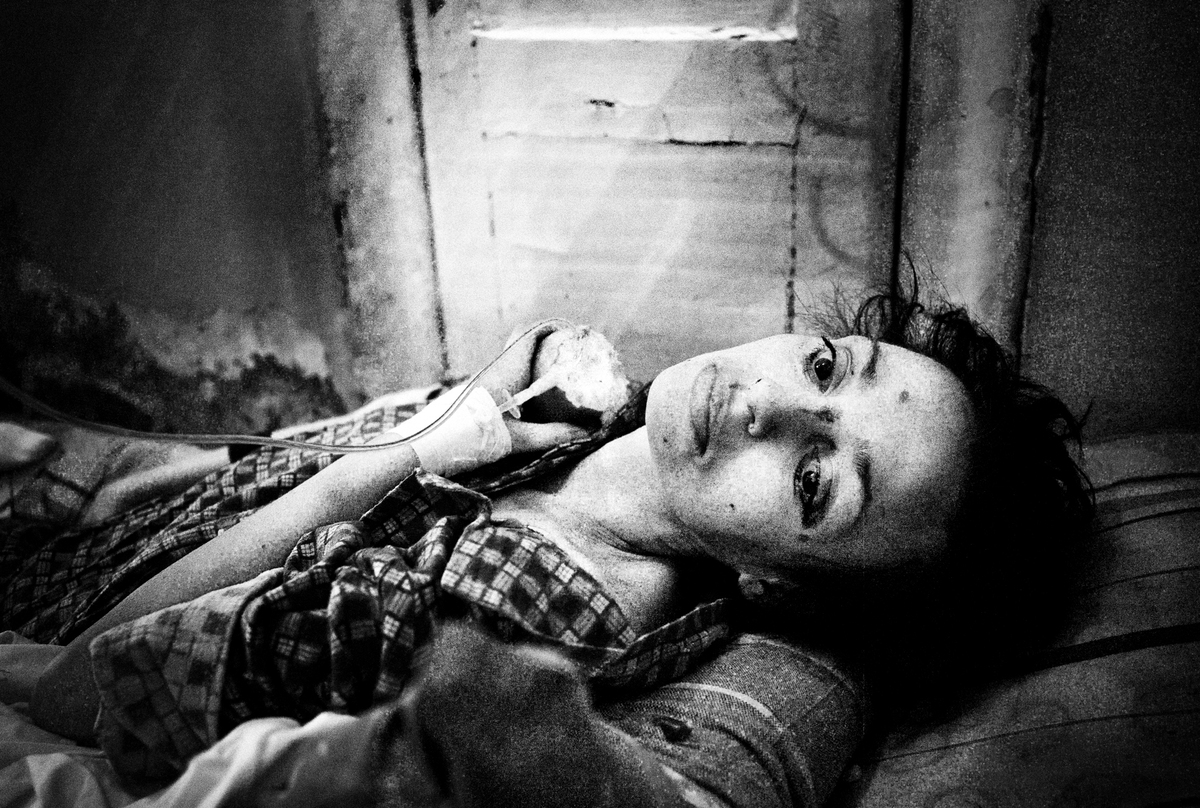 Polina, 37, rests in a hospital bed in St. Petersburg, Russia, in 2011. She is severely malnourished and suffers from numerous diseases, including tuberculosis, hepatitis C and HIV.

As the Ebola epidemic in West Africa slows and falls from the headlines, there is a temptation among many to view this outbreak as an isolated event. In fact, the opposite is true. Ebola is the tip of a global health crisis: a crisis in our collective ability to deliver the essentials of modern medicine to those who need help the most, in the most timely and efficient manner.

"Stopping a TB epidemic is difficult but not impossible."

Few diseases illustrate the ongoing nature of this crisis better than tuberculosis, a highly transmissible airborne infection that kills more than 1.5 million people every year. Many people think that tuberculosis — a disease often associated with 19th century Romantic-era poets or artists — has been eradicated. But this is not the case. In fact, the global burden of the disease is staggering.

A Killer Among Us

Last year, 9 million people became sick with TB. That's more than the entire population of New York City falling ill with a disease that we have largely been able to cure since 1947. As one patient in Russia so eloquently put it a few years ago, "How unromantic it is to die of tuberculosis in the 21st century."

And although the disease is the biggest global killer of adults after HIV — hitting people at the most economically productive points in their lives — it also affects 1 million children each year.

Whereas diseases like Ebola kill swiftly and put on a horrific display of symptoms, TB consumes many of its unknowing victims over a long period. It often goes undiagnosed for months, if not years, while it multiplies in families and communities. Individuals who are sick spread the bacteria through the air. Without the correct treatment, more than 80 percent of people who fall sick will eventually waste away — coughing up blood while their bodies are ravaged by the disease — until they die.

Tuberculosis Roars Back With A Deadly Edge

In recent decades we've seen a surge in the number of people falling sick with strains of TB that are highly resistant to conventional treatment and that kill rapidly when left untreated. These strains — passed through the air on buses and trains, in hospitals and clinics, in places of work and in the very communities and households where people live — can be found almost everywhere, from China to Nigeria, from the U.K. to the U.S.

A Change For Change

Bad And Good News About The Second Deadliest Infectious Disease

There is, however, an opportunity to change the course of this epidemic. More than a third of TB cases and almost two-thirds of drug-resistant cases are found in the BRICS countries — Brazil, Russia, India, China and South Africa, collectively seen as drivers of global economic prosperity and innovation that attract huge sums of foreign investment and that have burgeoning middle classes.

The BRICS countries must stop the spread of this scourge by investing in health care delivery systems that are able to find, diagnose and treat individuals exposed to and sick from TB. They must also put a priority on care for poor and vulnerable populations.

This is not news to health officials in these countries. In January 2013, the minister of health from each BRICS country gathered in India and announced they would put together a framework and collaborate on projects to expand access to treatment for tuberculosis and improve the quality of treatment. Little progress has been made toward this goal.

Stopping a TB epidemic is difficult but not impossible. New York City had an epidemic of the disease in the late 1980s, fueled by a rise in HIV, homelessness and underfunding of its public health system. At one point, the rates in parts of the city were as high as we see in India today, more than 200 cases per 100,000 people.

Standard epidemic control approaches were followed: actively locating those already sick, putting them on the correct treatment immediately, using preventive therapy to protect individuals exposed to the bacteria, ensuring that patients received the clinical, economic and social supports that they needed to successfully complete therapy, and strengthening the local public health system so that it was able to deliver comprehensive care to patients outside the hospital setting. As a result, the epidemic was halted.

Similar successes have been achieved in places as far afield as Russia's western Siberian province of Tomsk. After the collapse of the Soviet Union, Russia faced an unprecedented TB epidemic, driven by overcrowded jails and hospitals, medication shortages, and a breakdown in the state's ability to track and monitor cases. Like New York City, Tomsk embarked on a program of comprehensive care — creating patient-centered systems capable of delivering the correct therapy to people outside of the hospital setting — and successfully stemmed the epidemic.

New York City, Tomsk and many other places have taught an important lesson: Even deadly airborne epidemics can be brought to heel if we put the correct health care delivery systems in place. Instead of pitting diseases against each other in a competition for global health dollars, we have to see today's epidemics as a harbinger of our collective failure to build 21st century health systems capable of rapidly responding to health threats new and old.

This means recognizing that while having high-caliber hospitals is an essential part of a health system, it's not enough. In an age where preventable or treatable infectious diseases can spread rapidly around the globe and where large numbers of people suffer from chronic diseases that do not require hospital-based care, it is important to think about how to extend the diagnostic and therapeutic reach of our current clinic-based systems into the communities where patients live.

This challenge is as true for tuberculosis as it is for Ebola, diabetes and heart disease. And it is as true in London or New York City, as it is in Delhi, Durban, Monrovia or Moscow.

In facing tuberculosis, the BRICS countries have a remarkable opportunity to rethink how health care should be delivered in the years ahead. Proper epidemic control requires a robust health system capable of diagnosing and, where appropriate, treating patients outside of the hospital setting. In some places, this may involve community-based workers using computer-assisted mapping to identify where the most patients can be found; in others, it may involve mobile health clinics.

Such an approach will not only prevent unnecessary suffering and deaths from tuberculosis but will create better systems for addressing the communicable and noncommunicable diseases facing the world's population. We should make it unromantic to die of any treatable or preventable disease in the 21st century.