Accessibility links
You're Just A Blob In Layers Of Plastic : Goats and Soda Ever wondered what it feels like to get into one of the moon suits that Ebola workers wear for protection? At a TED Talk, Bill Gates gave audience members a chance to climb in and see. 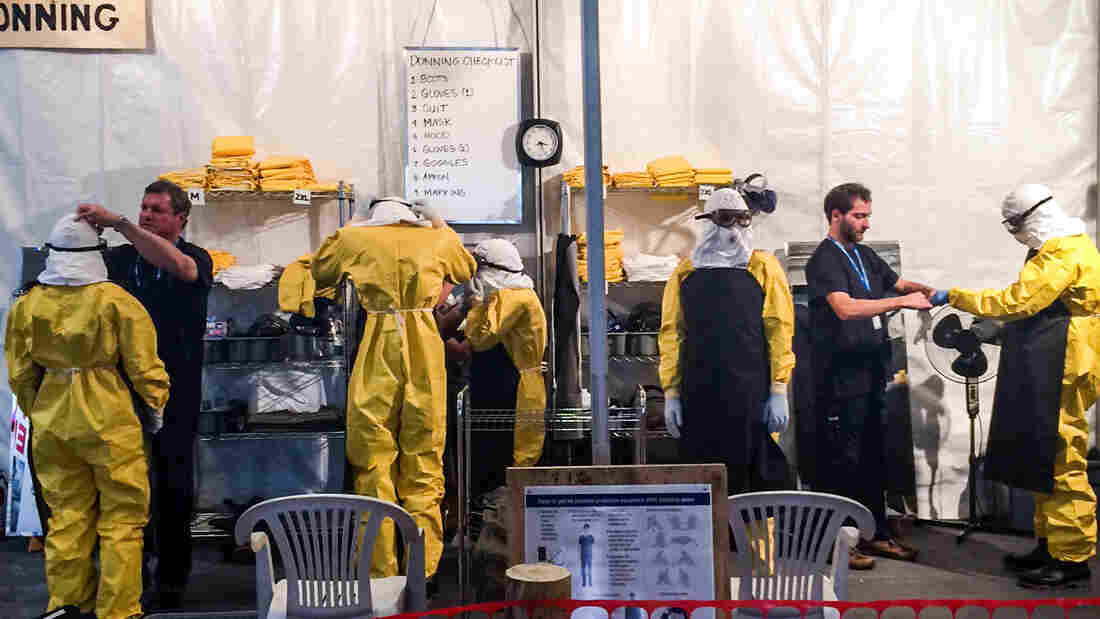 It's not the real deal. This Ebola Treatment Unit was set up for a TED talk in Vancouver so people could get a sense of what the units are like, and what it's like to put on the protective suit. Nina Gregory hide caption 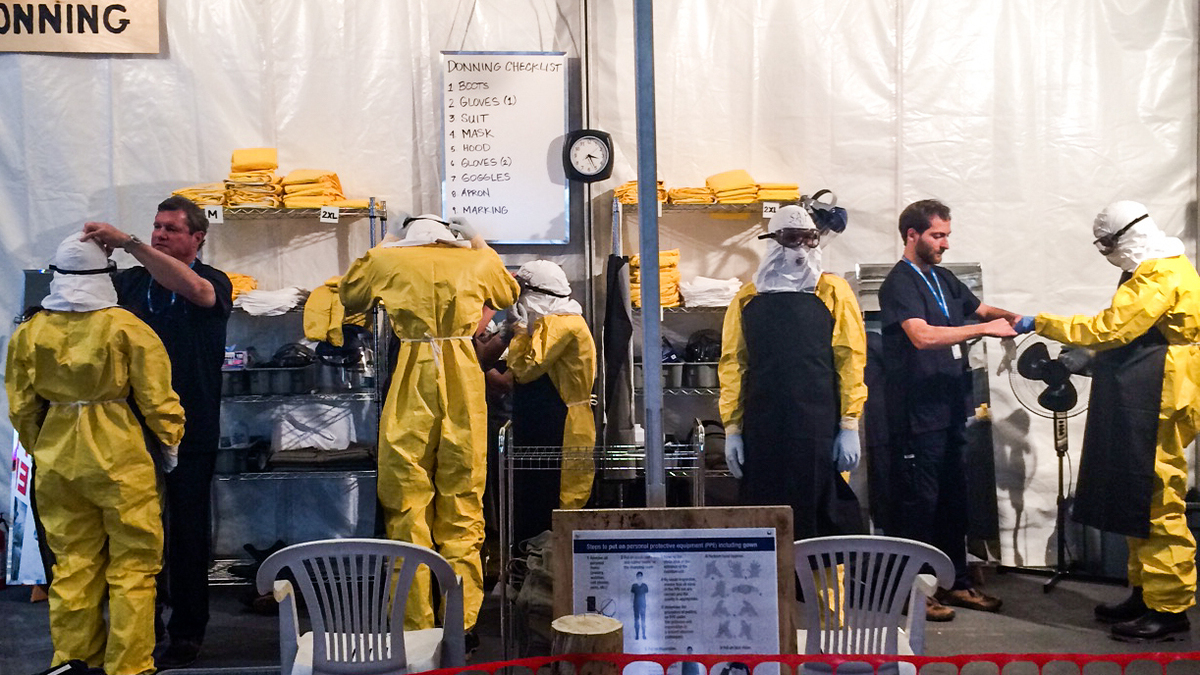 It's not the real deal. This Ebola Treatment Unit was set up for a TED talk in Vancouver so people could get a sense of what the units are like, and what it's like to put on the protective suit.

At his TED Talk in Vancouver last week, Bill Gates posed the idea that, "If anything kills over 10 million people in the next few decades, it's most likely to be a highly infectious virus, rather than a war. Not missiles, but microbes." He noted how the Ebola crisis in West Africa, which has taken about 10,000 lives, revealed serious problems in our global health care system. It's not that the systems didn't work well enough, he said. "We didn't have a system at all." He called the response "a global failure."

So what do we need to do for the next epidemic, according to Bill Gates (whose foundation is a supporter of NPR).

Get prepared. He emphasized governments prepare for war — developing high tech training, drills and exercises. Why not do the same for an epidemic, which he sees as inevitable?

In conjunction with his TED Talk, Gates had a simulation of an Ebola Treatment Unit (ETU) in West Africa built. The idea is that the ETU presents problems that the TED audience, filled with engineers, designers and tech experts, may be able to solve – or improve upon. People could try on those moon suits doctors and nurses had to wear in order to treat patients and experience what it really felt like to both put all the gear — as well as the more daunting task of taking it all off without getting contaminated. Doctors and nurses who had been in West Africa were there to walk people through the experience.

First: big rubber boots. Then latex gloves. A yellow plastic suit that zips up the front like a kid's pajamas, if they were made out of a tarp. Then a mask goes over your nose and mouth, a hood over your head, a second set of gloves. Then goggles, an apron and the finishing touch: They write your name across the front of your hood in Sharpie because now no one can tell who you are. You're just a blob in layers of plastic.

The first thing I felt when I had all my gear on was anxiety. It's hot. It's hard to hear or feel things with the tips of your fingers. Someone walking toward me in the same suit reminded me of the movie ET. When I caught sight of my own reflection — and saw those lumbering around in the mock ETU suited up like this along with me — it was unnerving. Imagine being on the other side: sick, dying of Ebola, and this giant, anonymous figure with not one fragment of skin or hair showing, is there to treat you, to try to save your life. My heart rate sped up, I felt faint and extremely claustrophobic.

Then it was time to get to work: Dole out pretend pills, put sheets on a cot, set up an IV. The double layer of gloves and all the gear made it really hard and extremely stressful. This is how it really feels, said Luanne Freer, an emergency medicine doctor from Montana. She spent six weeks at the end of 2014 volunteering in Sierra Leone.

"We wanted to give people the sensory and visual limitations we had in working in West Africa." Once you put the suit on, you only have 90 minutes with your patients in "the hot zone" because people wearing the protective suits are at risk of fainting. "My team had to care for 15 people," she said. "If our bodies would only let us stay in the hot zone for 90 minutes, some of our patients couldn't get care. We were faced with a Sophie's Choice: Do I leave or do I feed that baby? And we should never have to make that choice."

The hope was someone attending TED — an audience that includes some of the world's top scientists, engineers and inventors — might try these suits on and come up with something better.