Accessibility links
You Think Your City Is Full Of Trash? Ha! : Goats and Soda Welcome to Kathmandu — or, as some call it, Trashmandu. Even in the best of times, rubbish piles up everywhere. Now things have gotten worse.

You Think Your City Is Full Of Trash? Ha!

You Think Your City Is Full Of Trash? Ha! 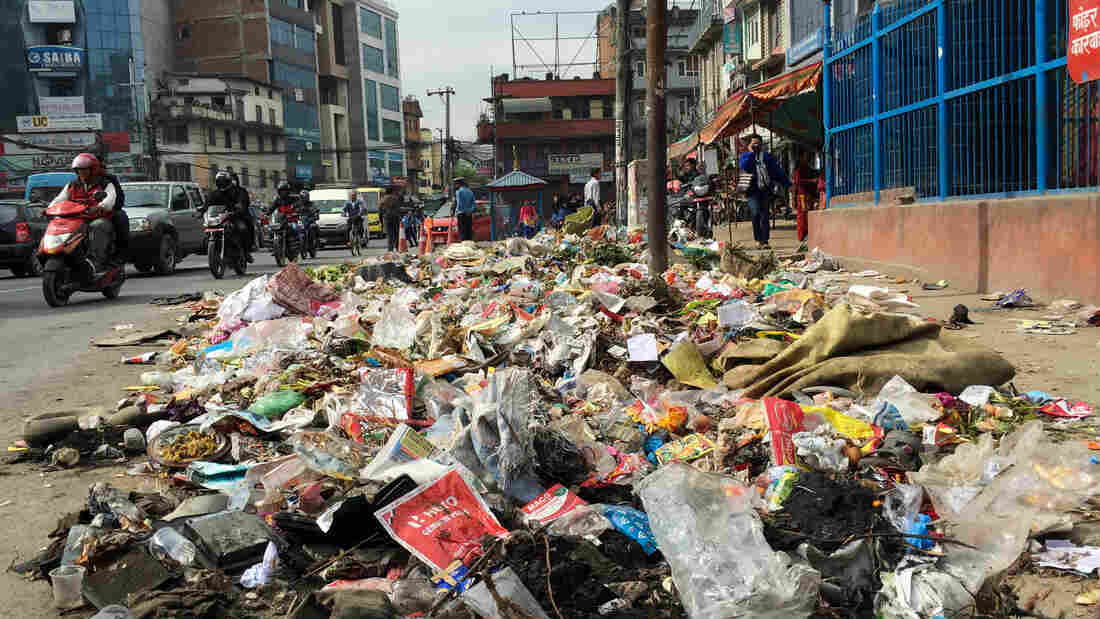 Even Oscar the Grouch might be put off by the growing heaps of trash in the center of Kathmandu. Donatella Lorch hide caption 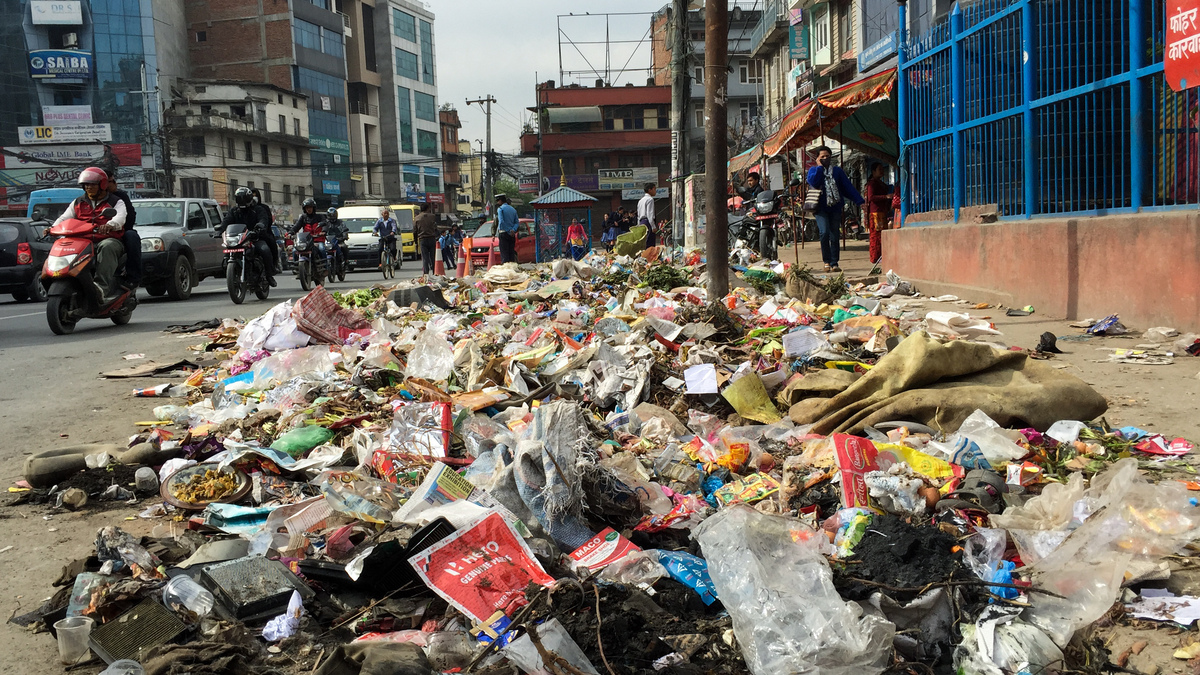 Even Oscar the Grouch might be put off by the growing heaps of trash in the center of Kathmandu.

They don't call it Trashmandu for nothing.

In Nepal's capital city of Kathmandu, garbage is pretty much everywhere. It's stuffed in plastic bags and dropped in drainage ditches. It's piled high in empty lots, on the roadside and on the edges of the city's sewage-filled rivers.

It is thrown out of bus windows and off rooftops into neighbors' yards.

It's hard to believe Kathmandu could get any worse. But this month, it did.

On March 11, a garbage truck descending into Sisdole, the Kathmandu Valley's only landfill, hit and killed 5-year-old Rijan Shrestha. Angry villagers torched the truck as well as four bulldozers working in the landfill. They threw stones at a firetruck attempting to douse the flames, injuring the driver. The villagers then barricaded the sole road leading into the landfill. The next day, 11 employee unions went on strike and refused to truck garbage to Sisdole, which is about 14 miles from the capital and takes in 992 tons of refuse a day, until the government provided proper security.

And so, Kathmandu is having a garbage crisis.

The morning after the standoff, trucks, tractors, cart-pulling bicycles and people began dumping trash on the street corners and riverbanks of Kathmandu and its sister city Patan. In the hot spring weather, the odors that emanated from stacks of garbage-stuffed blue and pink plastic bags gagged passers-by.

When the piles grew too high, they were set on fire. Acrid smoke from burning plastic filled the air.

Highly placed government officials made vague declarations that the streets had to be cleaned, but the stench did little to inspire the city government to move with any alacrity (see: the plane stuck on the airport runway).

The piles of trash that are smothering Kathmandu are a reminder that the world itself is drowning in garbage. A World Bank report puts daily garbage generation at 3.5 million tons, expected to hit 6 million tons by 2025.

And governments aren't always willing to pick up the trash.

Nepal's government, for example, has shown little commitment to the disposal of the valley's garbage despite passing a Solid Waste Management Act in 2011.

The government is trying to prepare a new landfill site, but a road needs to be built and a river needs to be diverted. That will take at least another three years.

There are ways to improve things in the meantime. The U.N., the Asian Development Bank and Nepalese environmentalists would like to see an end to open dumping. More than 60 percent of Kathmandu garbage is organic, they note, so composting could help. In addition, the government needs to aggressively promote awareness campaigns about the 3R's — recycle, reuse, reduce — in schools, in the media and door-to-door.

And environmental experts want Nepalis to stop using so many plastic bags that clog rivers and drainage pipes. The clogs create flooding and spread disease.

"Only a social movement can keep Kathmandu from being buried in garbage," warns Bhushan Tuladhar, regional technical adviser for South Asia at U.N. Habitat.

In the short term, Sisdole still needs to take in garbage. The Kathmandu city government borrowed four bulldozers from the department of roads and agreed to pay $10,000 to the family of the 5-year-old as well as address the concerns of both the villagers and the unions. Just to be on the safe side, armed police were sent in to guard the equipment and drivers.

Some environmental entrepreneurs think there might be a future in Trash Tourism (now being tested with a nine-hour walking tour of the "Trash Trail" in the Indian city of Bangalore).

After all, Kathmandu may have massive daily electricity cuts, endless fuel shortages and major water scarcity, but it never runs out of garbage.