Accessibility links
Go Ahead, Little Goat, Eat Some Poison Ivy. It Won't Hurt A Bit : Goats and Soda Amazon's getting into the rent-a-goat business (for weed chomping). After all, goats are great at wiping out unwanted plants — even poison ivy. How do they do it? 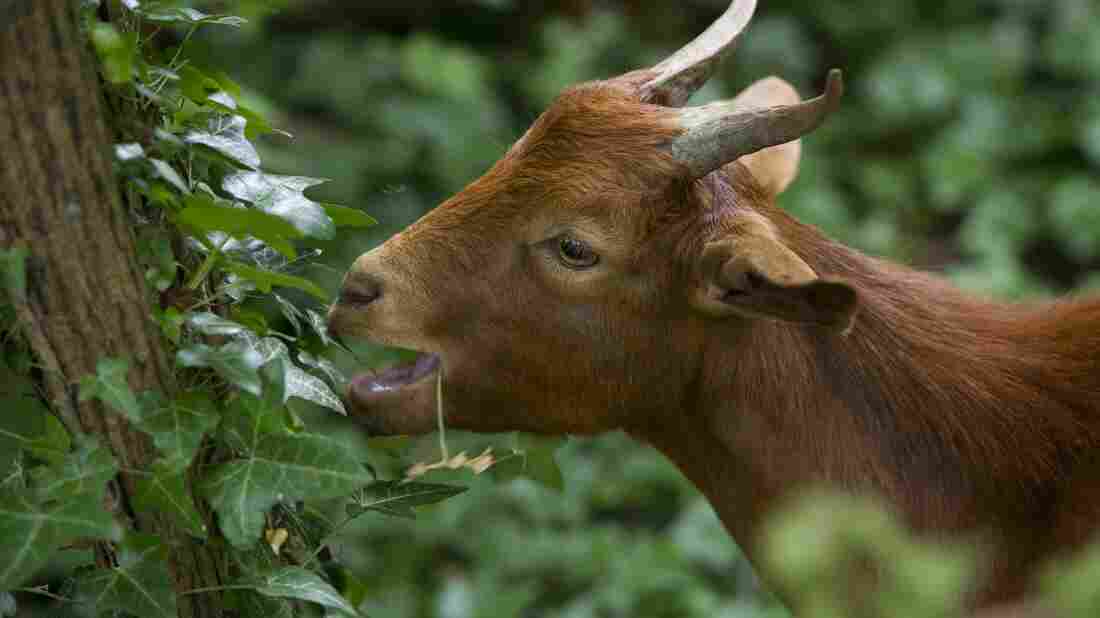 OK, so technically this goat is eating just plain ivy. But poison ivy is definitely on the menu. SAUL LOEB/AFP/Getty Images hide caption 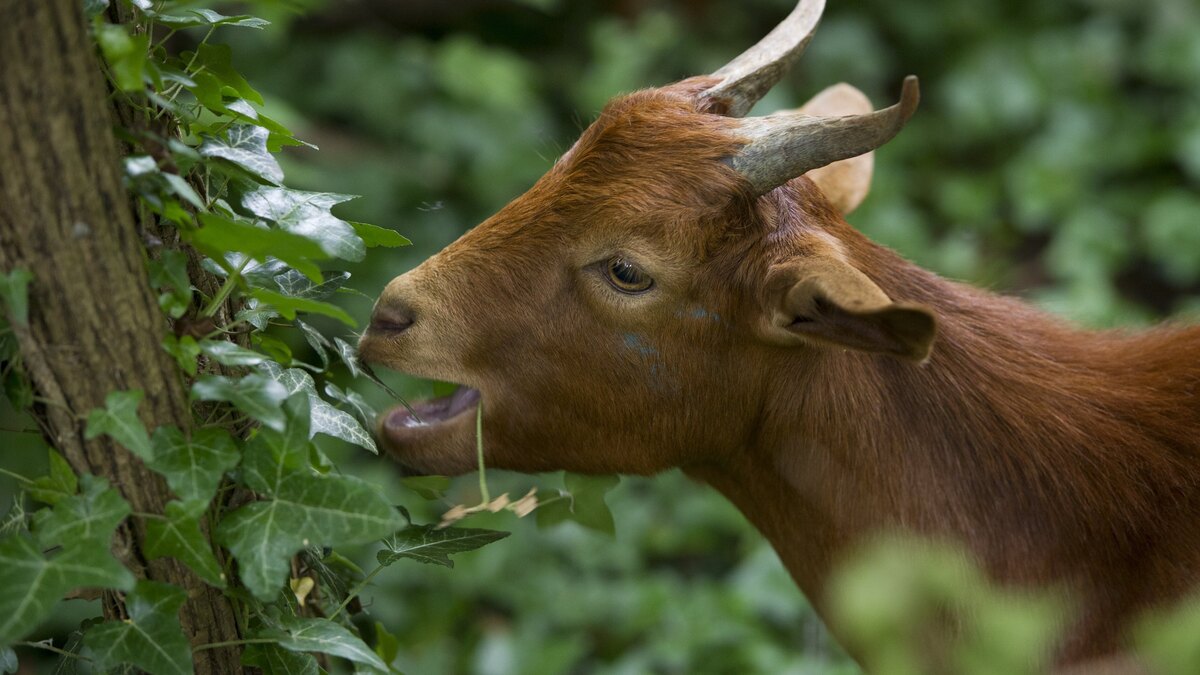 OK, so technically this goat is eating just plain ivy. But poison ivy is definitely on the menu.

Oh, those goats? I got them from Amazon!

The online giant is testing out a "Home Services" line. You can get a TV mounted on your wall. You can find a plumber. And you can rent a herd of goats to chomp on unwanted vegetation in your yard.

Goats In The City? Making A Case For Detroit's Munching Mowers June 18, 2014

I typed my Maryland ZIP code into "Hire a Goat Grazer." Sorry, "no providers available." It turns out that Amazon is wrangling goats only in the Seattle area right now, although a spokesman promises that more cities will be added.

As a goat admirer and editor of a blog called "Goats and Soda," I wanted to learn more about the grazing habits of goats — especially their alleged immunity to poison ivy. For enlightenment, I turned to Jean-Marie Luginbuhl, professor of crop science and animal science at North Carolina State University.

Why are goats not allergic to poison ivy?

Do you have any theories?

If you look at the world population of goats, which is about 937 million, 95 percent of them are within the tropics, north and south of the equator. So they evolved in very arid areas and basically had to survive on plants that contained noxious compounds. So goats evolved this ability to detoxify noxious compounds much better than cattle or sheep [can]. I think that's one of the reasons.

If a goat ate poison ivy, could I catch poison ivy from that goat's milk?

Some people have had concern that whatever compound [a goat ate] would be passed into the milk. But it's not.

And just to confirm: Cattle and sheep might get sick from a plant that wouldn't bother a goat.

When you look at books that talk about poisonous plants to livestock, a lot of the data are from cattle or sheep. If you see goats eating pokeweed and say, "Wait a minute this is a poisonous plant [to livestock]" — it doesn't affect goats.

So bring on the goats!

Here in North Carolina I have done work to clear up pastures and an abandoned orchard. We used goats, and they did a wonderful job getting rid of all the invasive vegetation: broadleaf weeds, woody perennials like greenbrier, honeysuckle, black locust, multiflora rose. We have cleared areas full of kudzu [an incredibly invasive vine native to Asia]. We grazed several plots about six times from early June to early October and basically got rid of the kudzu. Maybe 3 percent of it grew back the next year. But if you want to get rid of plants with goats, you have to start early in the spring and [have the goats] defoliate everything, get rid of all the leaves. So the plant has to use root reserves to make the first leaves. And if you do that over and over, these plants spend all of their root reserves and cannot grow anymore.

But I guess you do have to be careful that goats won't eat plants you like.

If you leave the goats there all the time maybe they will be a little hungry and if they don't have any green matter to eat, they will start to debark trees because they know the sap is under the bark. They will kill trees. That's good or bad, depending on the trees.

Can any plant harm a goat?

A lot of ornamental plants are poisonous to goats. Piedmont azalea are not going to necessarily kill goats unless they eat a lot but would make them really sick and throw up. Once they have that experience they would stay away from these plants.

There are a lot of goats in the developing world. Do people there use goats to clear unwanted vegetation?

In Africa they don't use goats to clean a pasture. But they do use the boughs of whatever woody shrubs are around to feed their goats.

Naw, it's just a joke. They are very curious. And so they are going to try to eat a lot of things that we see as crazy. But even when they see a piece of plastic they are not going to eat it. They just take it in their mouth and spit it out.

So no to plastic. What about paper?

We had a student working in one of the pastures at a little station where we used to record temperature, soil moisture, wind speed in a notepad. The student put the notepad down to do something with one goat. When she turned around, one month of data had disappeared! She thought she would be fired on the spot. We laughed so hard.