Accessibility links
See Priya Cook: Gender Bias Pervades Textbooks Worldwide : Goats and Soda In almost every corner of the world, women are either completely written out of school books, or they're portrayed in stereotypical, subservient roles, a report says. What will it take to fix this? 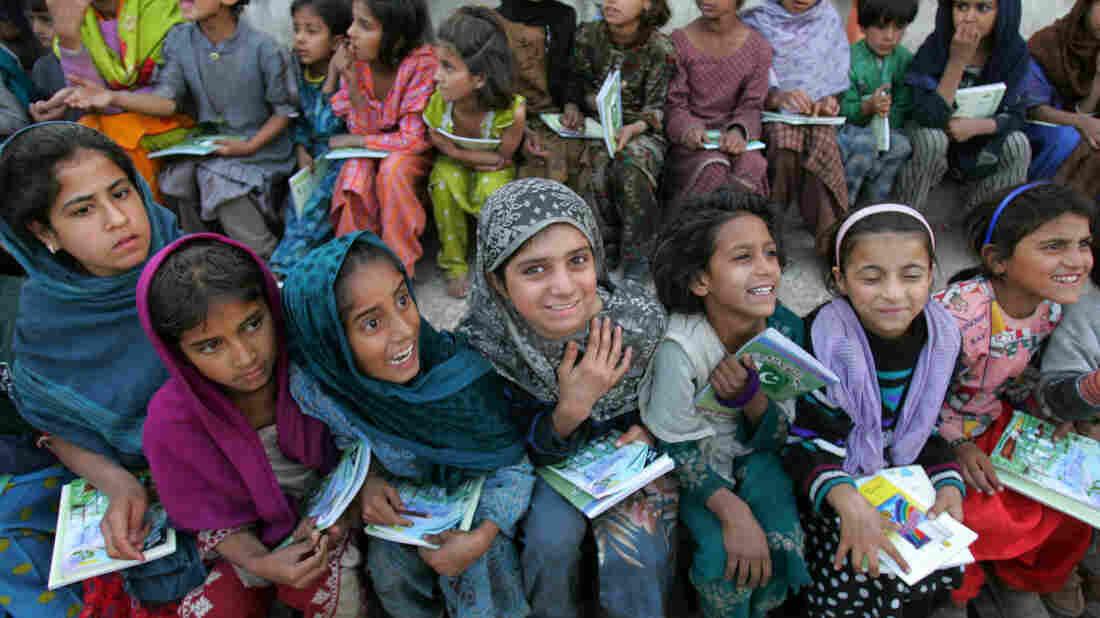 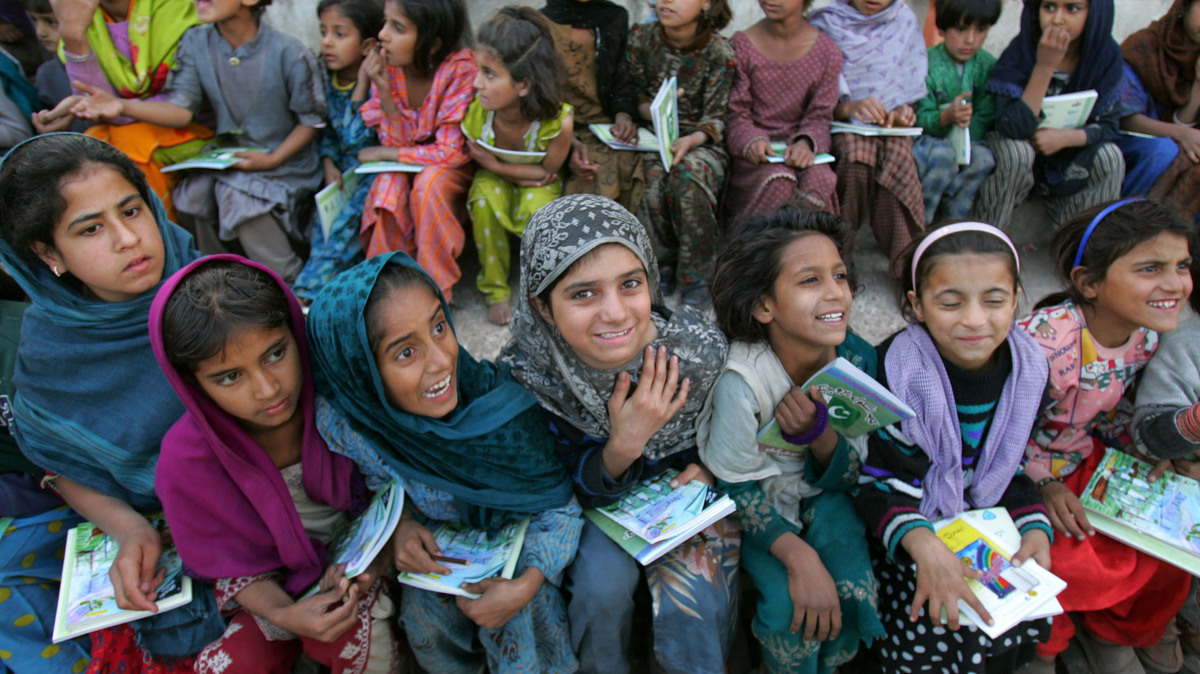 Young schoolgirls receive new notebooks and textbooks at a refugee camp in Muzaffarabad, Pakistan. Many girls in Pakistan still don't receive an education.

"If aliens beamed onto Earth and read our school textbooks, they wouldn't have a clue about what women contribute to our society," says Rae Blumberg, a sociologist at the University of Virginia.

Blumberg has spent years looking at textbooks from all over the world. In almost every country she has studied, women are either completely written out of texts — or they're portrayed in stereotypical, often subservient roles. 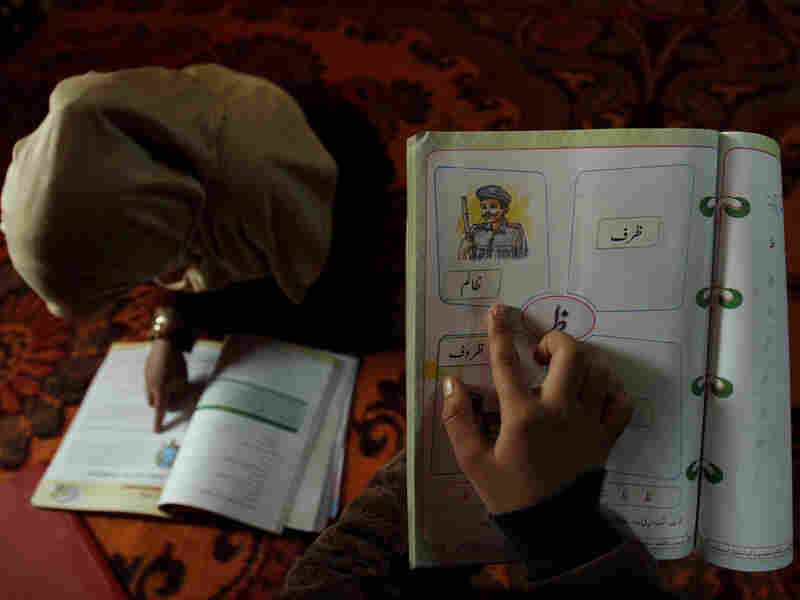 A student reads inside her home in Srinagar, India, as her sister points to a sketch resembling a male police officer in a first-grade textbook Mukhtar Khan/AP hide caption 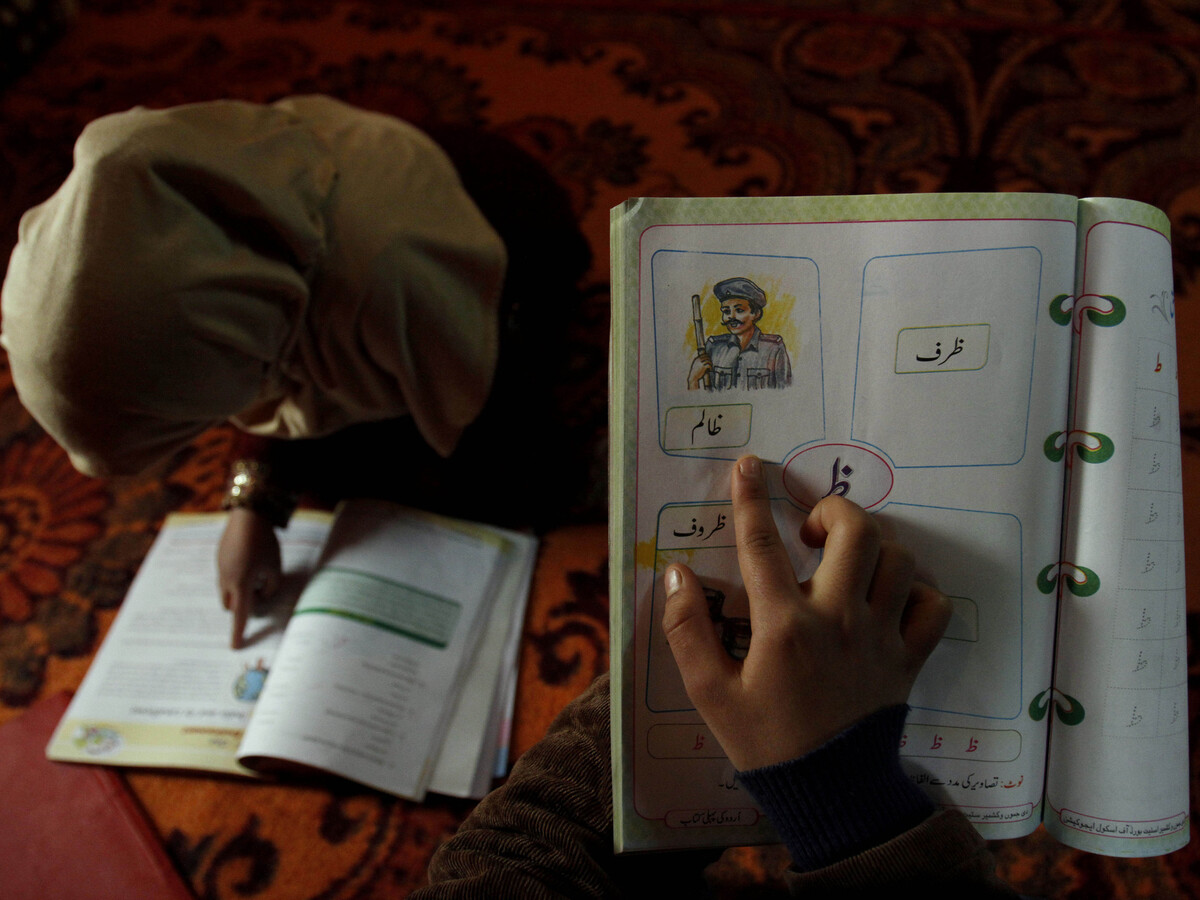 A student reads inside her home in Srinagar, India, as her sister points to a sketch resembling a male police officer in a first-grade textbook

Take for instance, a history and geography book for third graders used in West Bengal, India. The book doesn't show or mention any career women. It only depicts women cooking for men, serving men or caring for children.

An English language textbook used throughout Kenya looks similar. Children read about women and girls in the domestic realm: "My mother's cooking pot has a lid," and "Jane should plait the doll's hair herself." But children read about how men and boys take action: "Mr. Momanyi drives the bus," and "His idea is an interesting one."

"What we see is that the boys are being described as daring and brave and kind and intelligent," Blumberg says. "And they're doing things. They're taking action. The girls are essentially nonentities."

Blumberg recently wrote a report for UNESCO on gender bias in school books. For the report, she analyzed more than 60 studies that looked at textbooks in 21 countries.

In Iranian books, less than a quarter of pictures portrayed girls or women. In Georgian history books, only 7 percent of the illustrations showed women by themselves, Blumberg reported. In Thai textbooks, women were almost always associated with the domestic realm, while men were shown holding important public positions.

"It seems like a small thing," she says. "But a bunch of studies show that when girls don't see themselves in textbooks, they're less likely to envision themselves doing great things."

In an Israeli study, for instance, first graders who used readers that portray men and women as equals tended to think that most careers and activities were appropriate for both girls and boys. In contrast, students who used textbooks that portray gender stereotypes tended to believe and accept the stereotypes.

In many parts of the world, girls are less likely to go to school than boys, Blumberg points out. But for girls who are in school, subtle forms of bias in the class curriculum can reinforce negative ideas about women. "In this way, a lot of girls end up being less than they could be," Blumberg says.

Some countries have made efforts to fix gender biases in school books, she says. "In Sweden these days, if you see a children's book with a picture of someone cooking or cleaning, it's more likely to be a boy," Blumberg says.

Digging Into The Roots Of Gender Differences

In the U.S., there's been an effort since the 1980s to combat gender bias in school textbooks. But still, women don't have equal play in history books, a study reported in 2006.

Most governments can't afford a complete rewrite of school books. And even with the monetary support of organizations like the World Bank, efforts to change the curriculum tend to get bogged down in bureaucracy, Blumberg says.

"And when teachers and education committees are biased, they're not going to approve the kind of changes that are needed," she adds.

That's why training teachers to recognize and fight gender bias is an important first step, says Erin Murphy-Graham, who studies education policy at the University of California, Berkeley.

"The tricky thing is that in most of the world, students don't even have their own textbooks," she says. "So oftentimes you have teachers picking and choosing examples and texts that they include in the curriculum. But with the proper training, teachers may be able to recognize bias in texts and help students do so as well.

"All over the world, kids are constantly going to be coming up against gendered, biased material," Graham says. "But a good teacher can help students critically analyze what they read and fight against these ideas."