Accessibility links
Fake Medicines Do Real Damage: Thousands Die, Superbugs Get Stronger : Goats and Soda In tests of anti-malarial pills and antibiotics, 9 to 41 percent didn't meet quality standards. And the world does a crummy job chasing criminals who reap $75 billion a year from counterfeit meds. 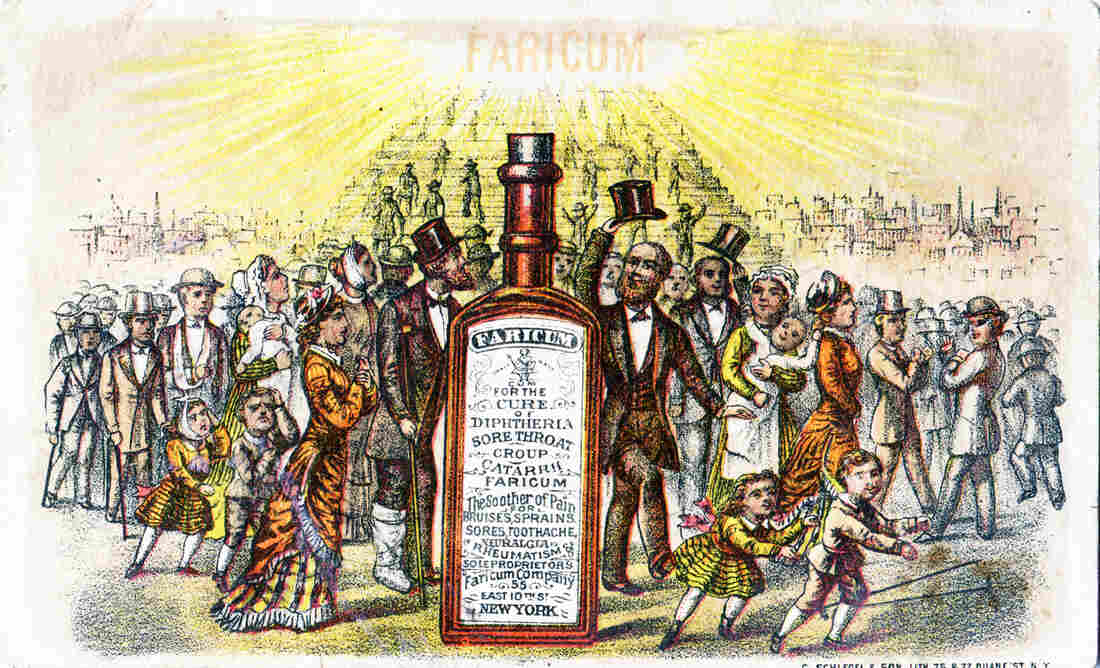 Fake medicines are a 21st-century scourge, but they've been around for a long time. This advertising trade card for snake oil was printed in New York City around 1880. Transcendental Graphics/Getty Images hide caption 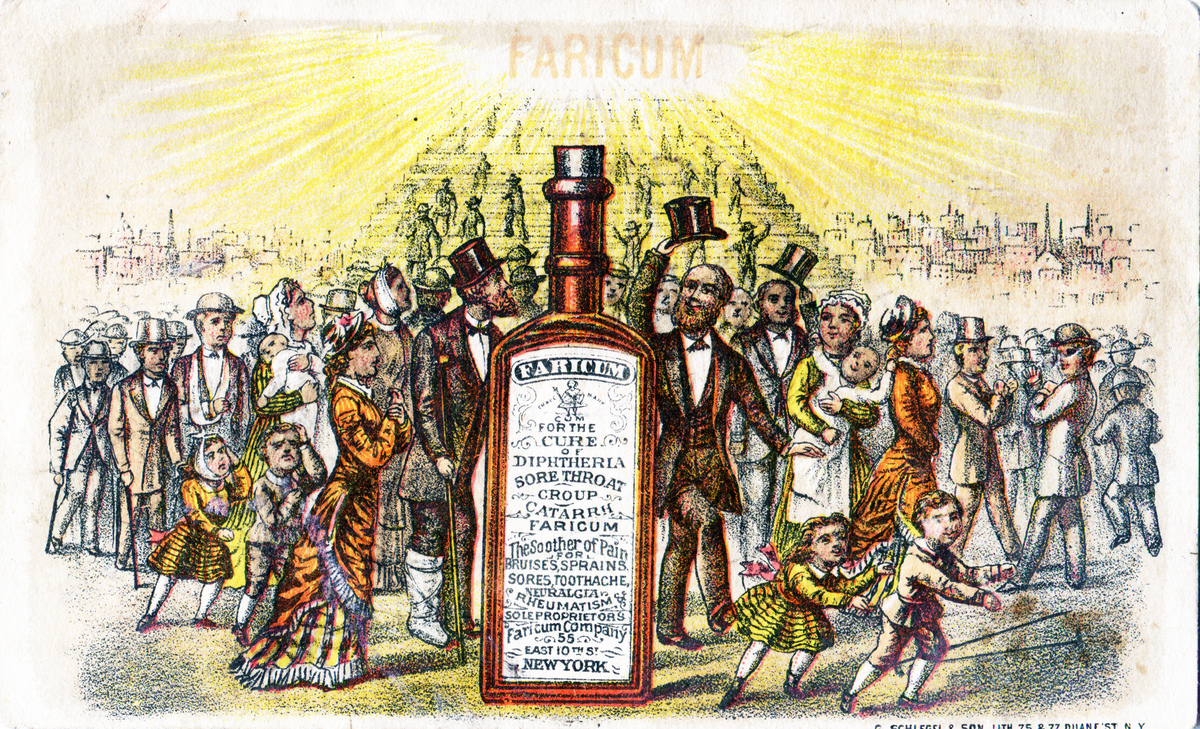 Fake medicines are a 21st-century scourge, but they've been around for a long time. This advertising trade card for snake oil was printed in New York City around 1880.

The global battle against malaria, tuberculosis and other deadly diseases faces plenty of obstacles. Among them: a pandemic of fake and poor-quality medicines.

The extent of the bad drug problem is laid out in 17 papers in a special supplement of the American Journal of Tropical Medicine and Hygiene. In 16,800 samples of anti-malarial and anti-tuberculosis medicines, antibiotics and anti-leishmaniasis drugs, testing showed that between 9 and 41 percent of the medications failed to meet quality standards.

When patients unknowingly take bad drugs, they don't just fail to get better. If a drug contains just a little but not enough of the active ingredient, it can also help breed superbugs that become more resistant to the real stuff.

To find out about the scope of the problem, we talked with Joel Breman, an expert in infectious diseases, tropical medicine and epidemiology at the National Institutes of Health and a co-editor of the supplement, timed to bring attention to World Malaria Day on April 25.

What led to the publication of this special issue?

For our group, this began with the alarming find of resistance of the malaria parasite to the new artemisinin compounds, the wonder drugs that came into use in the early 2000s. We at NIH had been following a pattern that started showing itself around 2006, with resistance of parasites to use of these drugs. We called a meeting to look into this, and we saw that, particularly in Southeast Asia, a lot of the drugs being used were of poor quality. There had been reports a few years earlier that poor drugs were around, but the extent wasn't known. In 2012, we published a paper showing that a third of all anti-malarial drugs taken off the shelf in nonrandom surveys in Africa and Asia were absolutely fake. In about 4,000 samples, there was not a drop of active ingredient there. With the new wonder drug, up to 42 percent were fake.

What kind of harm is done when falsified or low-quality medicines make it to the marketplace?

For malaria, one of the studies reports that 122,000 children under the age of 5 are dying in 39 sub-Saharan African countries due to the use of fake [that is, no active-ingredient] anti-malarials. That would be up to 20 percent of all the deaths reported due to malaria. That, to me, is about as scary as it gets.

If you are giving substandard doses with just a little bit of the active pharmaceutical ingredient, then the disease-resistant organisms] will [survive]. When there's no [active ingredient at all], people think you're not really selecting or promoting mutations. But if you take a patient in the hospital infected with a superbug, and you give them a blank with nothing in it, other patients in the hospital become susceptible [to catching the disease from that patient].

Who's responsible for fake medicines? Are they bad-guy scamsters out to make it rich?

You are being gentle in your description. These are criminals. These are murderers. Interpol is involved in [investigating] this activity, but because of the great deal of difficulty to track these fly-by-night operations, I can't answer who they are. India and China seem to be the countries where most fake medicines are being produced. And paradoxically, these countries also produce very good medical products, particularly anti-microbial agents. Let me add that the United States imports up to 80 percent of the ingredients that go into our medicines from abroad. So we're concerned about that, as well. There's an estimate that there is $75 billion a year of revenue for criminals in the fake drug industry. Where that comes from is — some economists have done back-of-the-envelope [calculations]. I wouldn't be surprised if it was much more.

How can we stop them?

The leadership is absolutely crucial — to have an international organization to decide which approaches for detecting [fake medicines] are the best, the lowest cost and the easiest to maintain, and then sharing this with countries around the world and training people. We don't have that.

The second thing is to have some agreed upon treaty or covenant. Since 1929, all countries in the world agree that the counterfeiter will be slammed in jail if he's [caught] passing a counterfeit dollar anywhere. Many countries don't even have FDA-type regulatory agencies to deal with [counterfeit medicines]. We need to help those countries assess their pharmacies and their drug supply chains to be able to track and find the sources. Now there is just a hodgepodge of approaches. In many countries, there is just a pat on the wrist or a small fine if they find a criminal.

Do we have the science to detect fake drugs?

The technologies we're using have to be improved. Many of them are high-powered chemical analytical tests that require central laboratories. It takes a while for the results to come back. We need simple, cheap tests that can be used in the field to diagnose these problems. There's a simple device coming out of the CDC that uses light to show if a pill is fake. There's a handheld device that was tested in Laos recently that worked beautifully to detect fake packages but the cost was over $1,000. That's too expensive.

Have any countries made progress in stemming the flow of falsified medicines?

One of the papers shows that, in Laos in 2003, upward of 80 percent of anti-malarials were fake. Now, it's less than 10 percent. They have taken action and collaborated with scientists and public health people at institutions like the London School of Hygiene & Tropical Medicine and Oxford University. Their public health and infrastructure there has been sensitized to training the pharmacists and having a judicial approach: If they find people, they prosecute. The main thing that has helped in Laos and Cambodia has been [widespread] testing and taking the bad drugs off the market.

Does that make Laos a success story?

They're still having trouble with substandard medicines that are not falsified or produced by criminals but decay or degrade due to heat, transport or poor preservatives.

Was there a time in American history when fake meds were rampant?

There were a lot of products, like fake snake oils and traditional remedies, that were used commonly in the 1800s and early 1900s.

So how did the U.S. take control?

That was the origin of the FDA. And look, we still have a lot of — what shall we say — natural products being sold, and those active ingredients and efficacies have to be confirmed.

So fake drugs were a problem hundreds of years ago?

I wouldn't be surprised if [it started] even before that. Maybe snake oil was replaced with, say, crocodile oil.