Accessibility links
A 10-Year-Old's View Of The Nepal Earthquake : Goats and Soda "It would be so much more convenient if the earthquake would send us an email in advance with all the details of its arrival," a fearful Lucas told his mother, a journalist.

A 10-Year-Old's View Of The Nepal Earthquake

A 10-Year-Old's View Of The Nepal Earthquake 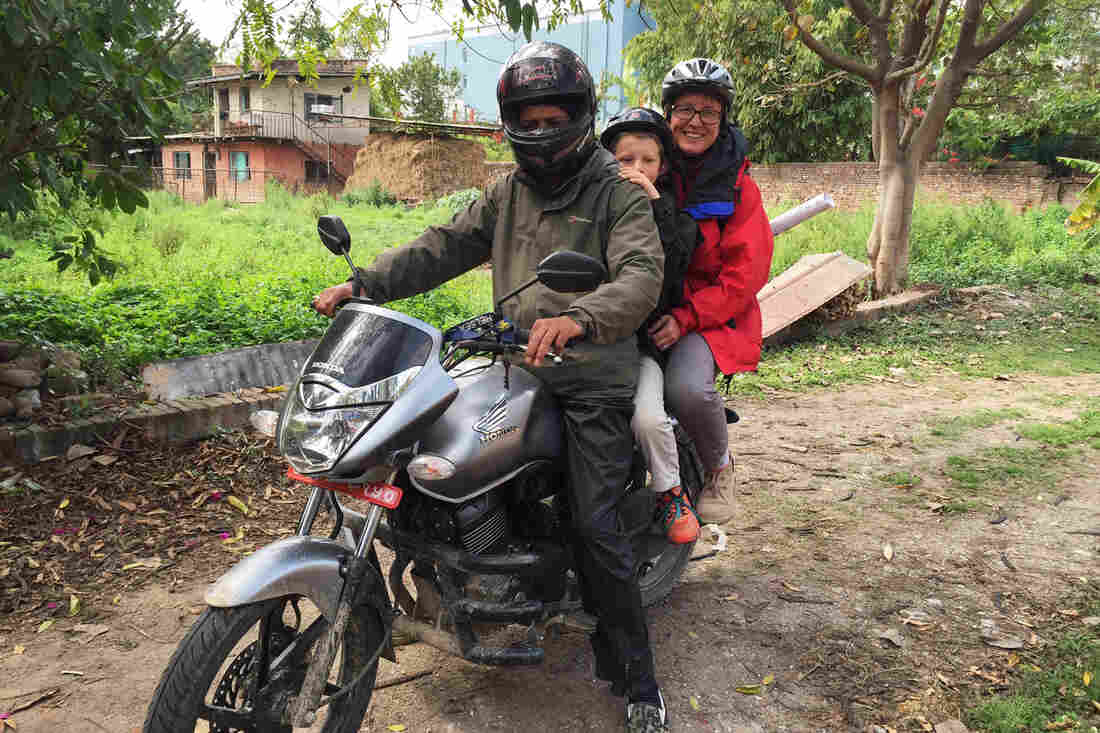 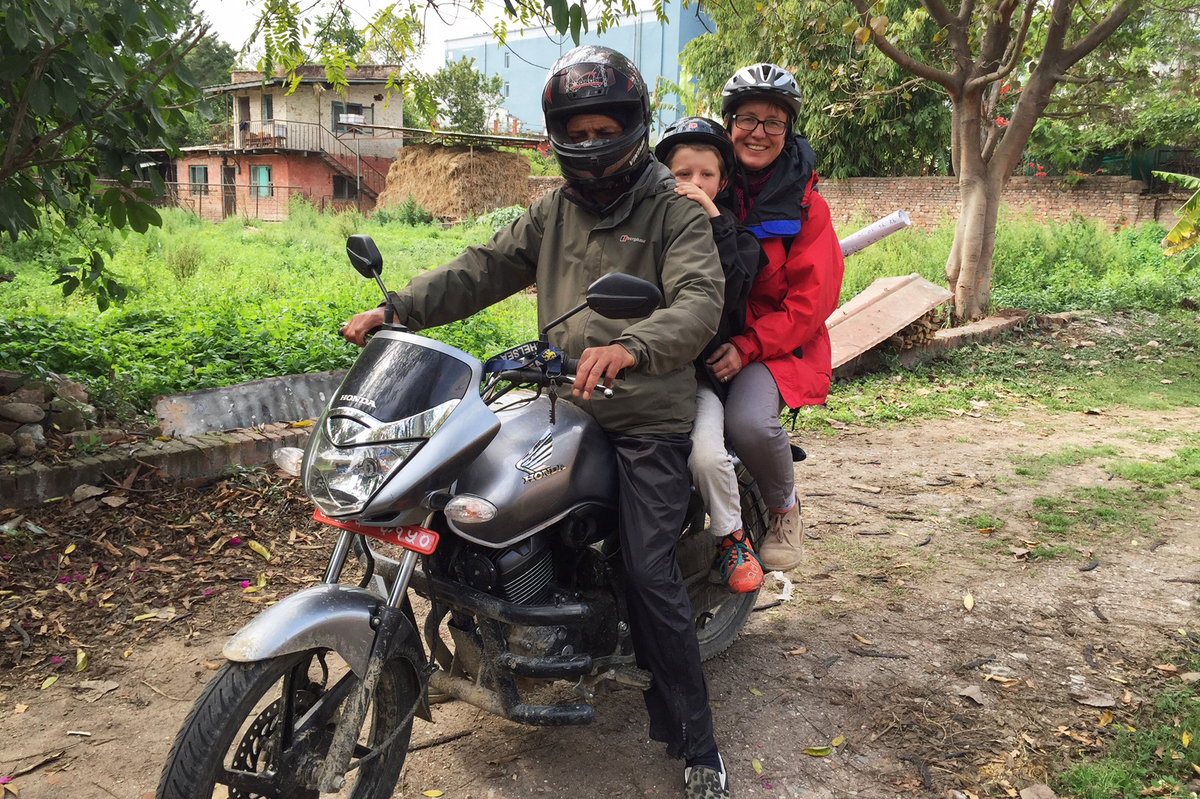 Journalist Donatella Lorch broke her no-motorcycle rule so she and her 10-year-old son, Lucas, could survey earthquake damage.

When the earthquake hit, my son, Lucas, and I were in the car and he was trying to find "The Piano Guys" on my iPhone to blast through the car speakers. He didn't realize anything was amiss until the car jolted violently up on two wheels then slammed back down. I stepped on the brake and yelled, "Earthquake!"

Lucas knew from his school, his parents and of course YouTube to "drop, cover, and hold." And so he immediately did what he calls the airplane brace position: forehead on knees and hands on top of your head.

"Of course I was scared," he told me. But this did not stop him from taking in the events around him: "There were people running out of the houses and there was the guy on the motorbike overtaking us who fell off and skidded down the road and then stood up. Just like Superman."

Lucas, who's 10, likes to be prepared. When we moved to Nepal in 2013, I explained to him that this was a country that was at risk for earthquakes and that he needed to know what to do if one hit. Lucas helped me pack the family "go-bags" — backpacks that hold essential clothes and documents and medicines. I attached a fanny pack to his bedstead with a whistle, a flashlight and a bottle of water. He knows his mother is obsessed with having enough clean water to drink.

Saturday's 7.8 quake hit Kathmandu just before noon as we were driving to lunch. For both of us, the adrenaline kicked in as I gunned it back home. Even though the house was still standing, Lucas knew it was too risky to go back in. But he did grab the go-bags right near the entrance. It was sunny, and we sat on a blanket. Lucas curled up in my lap as aftershocks hit until, utterly exhausted, he fell asleep.

Since then there have been more than 50 aftershocks — some just tremors and others terrifying undulations that never seemed to finish. Every shudder, every sound, every group of crows cawing, makes us stop what we are doing, tensely awaiting that first shake.

Lucas, too, has fears that come in waves. When they hit, he sits in a corner and grows quiet. "It would be so much more convenient if the earthquake would send us an email in advance with all the details of its arrival," Lucas mused during one shock as we were crouching on the lawn.

Our friend Keshav, who's 52, says Nepal is now suffering from an "earthquake hangover." Lucas, like so many of us, feels the earth shaking or pitching when it's not. He can also be very analytical. Just this morning we heard a crash and didn't know what was happening. Lucas said, "I don't think this was an earthquake. The ground wasn't moving."

Schools are, of course, closed. Lucas decided he'd rather go out reporting with me than stay at home. "I am going wherever you go, Mum," he declared. Since his dad is based in Bangladesh and his older siblings go to school in North America, we are a tiny family unit.

He's an old hand at following me on reporting trips. In our four years in Africa, Lucas went with me on filming trips in the northern wild Samburu territories and met and played with slum kids in Nairobi. After last year's Everest avalanche, I had no child care so I brought him along to hospitals where I interviewed wounded Sherpas.

But the quake has been a totally different reporting venture for both of us. This is not only about others; this is also about us, our neighbors, our friends, his classmates. This was about not having his dad around. "It's a cool way to see what is happening," he has assured me. "And besides it is good to be together when the aftershocks hit." 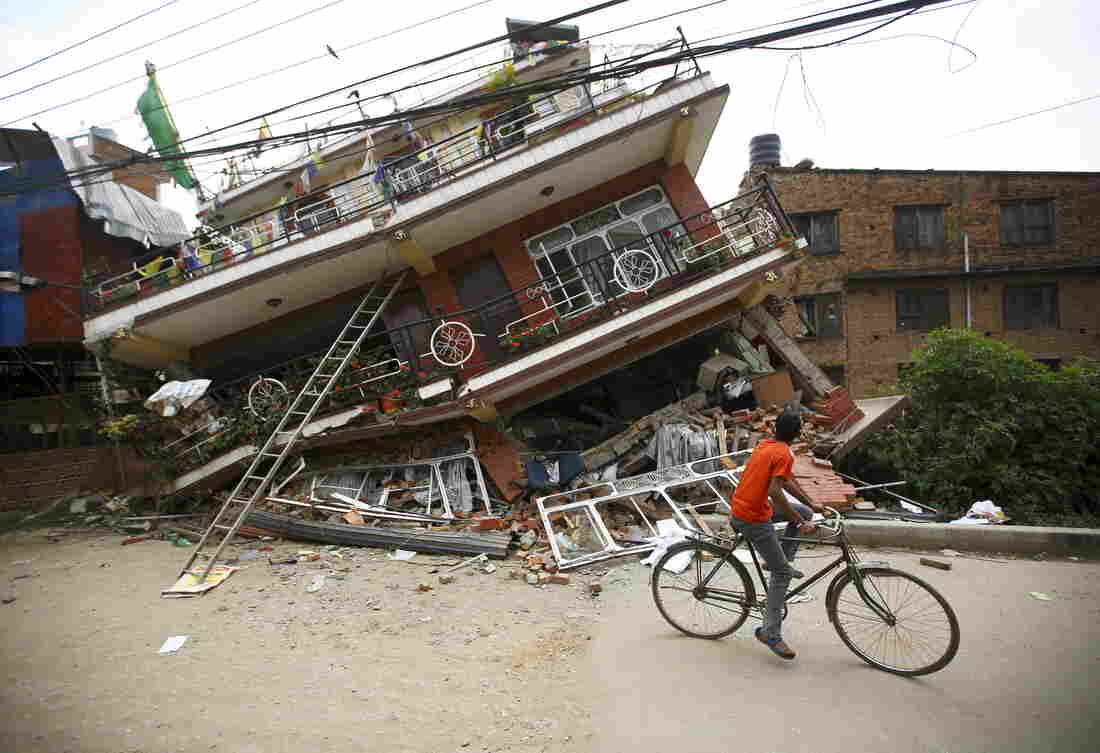 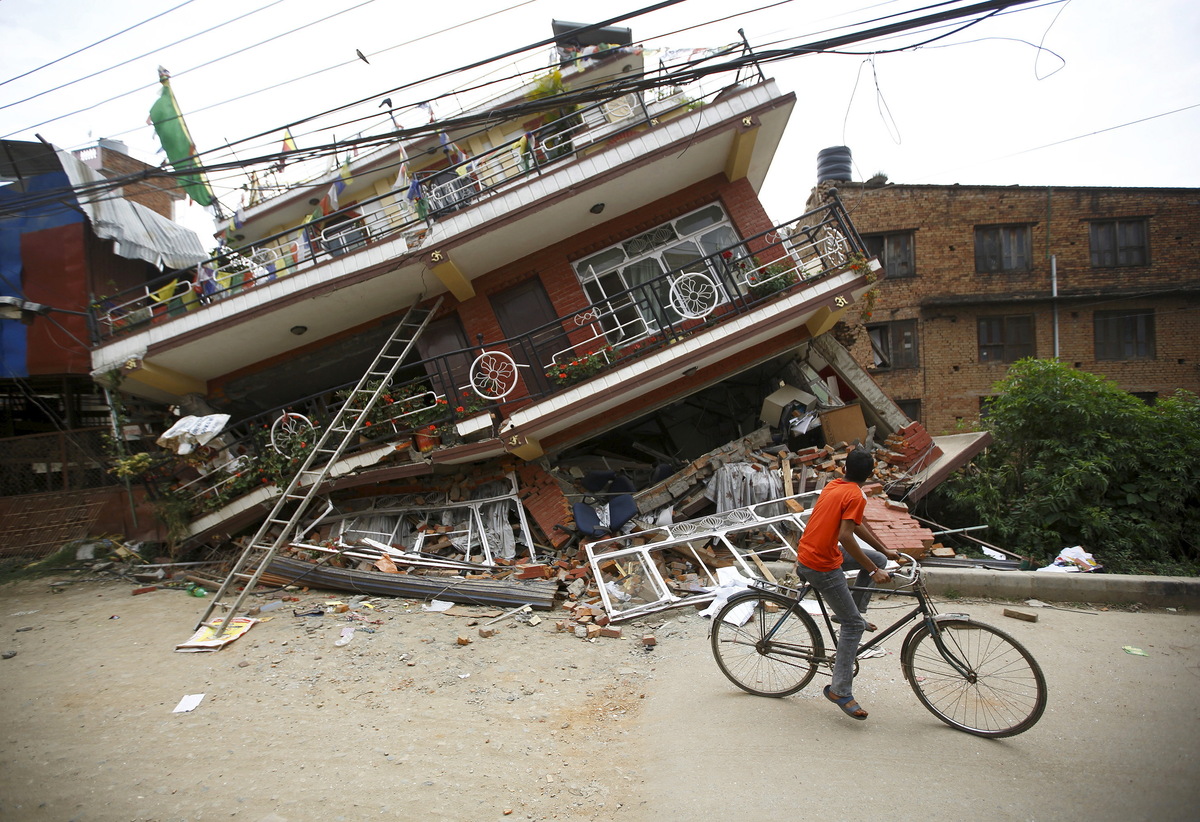 Houses collapsed after Saturday's quake. The newly homeless are living in tents.

In normal circumstances, none of my children are allowed on motorcycles. This rule was influenced by a bad motorcycle accident I had when I lived in Peshawar, Pakistan, as an idiotic 26-year-old. But earthquakes change rules. We had to break even more rules by going three on a bike, with Keshav driving and Lucas sandwiched in between us. In a faint semblance of following safety regulations, we wore our bike helmets.

Lucas' assignments are to point out badly cracked houses, drooping Internet towers or large groups of people huddled outdoors under tarps. He will philosophize on the size and type of aftershocks and correct me frequently on most everything quake-related. And he absolutely enjoys living in a tent in our backyard.

Like so many of us, Lucas now is very sensitive to any noise that might suggest an earthquake, jumping up even at the sound of a revving bike engine. He is sensitive because he has seen firsthand the devastating impact that an earthquake can have. He's seen a bulldozer dig through the remains of the collapsed Dharahara Tower in Central Kathmandu, a thick-walled brick construction that crashed down on more than 200 people, many of them schoolchildren on a weekend outing to see the views of their city from high up.

In the evening, he chats with our neighbors. who spend the night under a tarp with 50 others in an open lot on our street. He obsessively checks our house for cracks after every aftershock because so many others he knows have lost their own house — in particular, his friend Keshav (the same name as the motorcycle rider but a different guy). This Keshav, who's 38, lives in a village on a high hill about an hour from Kathmandu. And his entire village was flattened.

Keshav and Lucas sat together looking at photos of the crumbled houses and the plastic covered tomato greenhouses that Keshav and his family now call home. "He had invited the priest over that morning and they were all praying in front of the house," Lucas told me. "And then the earthquake hit."

And then Lucas asked: "Where will they live now if no one in the village has a house?"

Donatella Lorch is a journalist based in Kathmandu. She is a frequent contributor to Goats and Soda.