Accessibility links
Virtual Volunteers Use Twitter And Facebook To Make Maps Of Nepal : Goats and Soda After the earthquake struck, they began using social media to find out the extent of the damage, who needs help — even where aid groups are setting up shop. 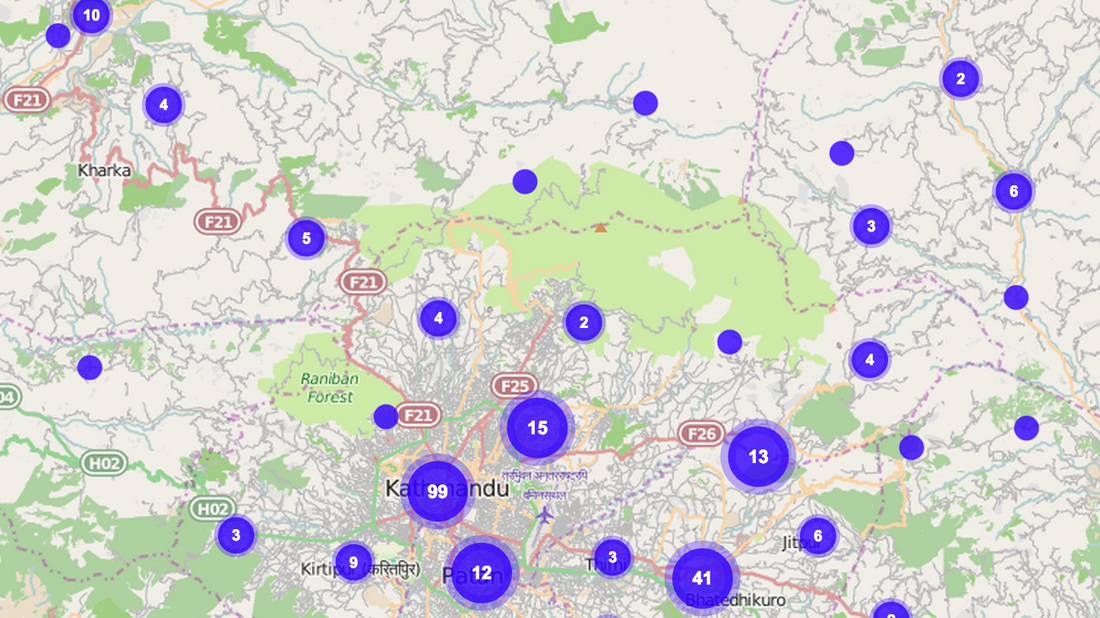 The village of Melamchighyang needs 100 blankets.

The remote area of Hyolmo has many injuries, and only two nonprofit groups are providing "limited aid."

Two girls from Germany are missing in Langlang Valley.

People are stranded in Kyanjin Gompa.

These pleas for help in the aftermath of the Nepal earthquake have popped up on ever changing maps of the disaster zone, compiled and posted by hundreds of digital volunteers around the globe. They've not been to Nepal and very likely haven't met each other, instead working together through online forums and chat rooms and posting their work to Web documents and maps.

Soon after the earthquake struck on April 25, volunteers began monitoring Twitter, Facebook and other social media for reports from Nepal. Some worked to translate them; others posted to maps and Google docs to help guide responders in the stricken country.

Far-flung volunteers are also creating and improving maps of Nepal by studying satellite and air reconnaissance photos. Some of the images they're using come from drones flown by volunteers.

Their efforts have filled critical information gaps, particularly in the early days as international organizations scrambled to get aid to Nepal.

The arriving agencies even lack information about each other. So volunteers also track tweets and other reports from aid workers on the ground, including who they are, where they are and what they're doing. "Those early '3W' reports are crucial," says Melissa Elliott, who helps coordinate a group of online volunteers.

You Want To Go To Nepal And Help Out. Is That A Good Idea?

Show Us The Aid: Anger In An Ancient Nepali Town

A public relations executive in Toronto, she's on the board of directors of the Standby Task Force, a loose organization of several thousand digital volunteers around the globe who track, map and post news of damage and pleas for help when natural disasters strike. After the Nepal earthquake, she and other volunteers neglected sleep as they met in online chat rooms, trading tidbits and discussing how they can best help.

"I'm in 17 chat rooms right now, and thousands of lines behind in my reading," sighed Jen Ziemke, a political science professor at John Carroll University in Cleveland and co-founder of the International Network of Crisis Mappers.

It was Crisis Mappers that helped focus on the potential of social media back in 2009, at a conference organized by Ziemke and co-founder Patrick Meier. The goal was to recruit online volunteers to analyze huge data sets. In other words: crowdsourcing, relying on volunteers to take a slice of a huge task, such as clicking through photos streaming from Nepal to identify where help is needed first.

The concept was tested just three months after the conference, when an earthquake struck Haiti. Government offices were destroyed, leaving little official data to guide dozens of countries and international agencies that rushed to help.

Online volunteers mobilized to fill gaps in Haiti maps while also monitoring social media for reports from the ground. In Toronto, Elliott was looking for a way to help when she noticed folks in Haiti tweeting about their pay-as-you-go cellphone accounts running out of money. With banks down in Haiti, even those with money couldn't get to it.

So Elliott set up a network of friends who electronically channeled money to some 75 Haitian cellphone accounts to keep them operating. Those account holders in turn offered to share information. "It became a unique situation of you are helping me, so I'm helping you," says Elliott. "It was quite magical."

Today, the task force has more than 2,000 volunteers registered and trained to help, Elliott says. It's just one of a number of networks that mobilize online volunteers to help in the wake of disasters. Like most of them, it operates without physical offices and through donations, including time on computer servers.

As with many volunteer efforts, an 80/20 rule applies: Eighty percent of the people are mainly lurking.

"At the same time, 20 percent of us kill ourselves trying to respond to an emergency," Elliott says.

She's exaggerating — but just a little. "People let their families and work suffer because they become obsessed with helping," Ziemke says. "We're always talking about how we can convince people to take a break."

A lot of the work is drudgery, clicking through thousands of tweets or photos to identify useful information. But volunteers can get fixated, much as with video games, on pumping up the number of successful contributions.

The results are displayed to emergency workers in Nepal on dozens of maps, which itself is a problem. Aid groups sometimes get overwhelmed by the flood of digital data. "They'll just say forget it, that they're going back to paper," Elliott says.

To make things easier, the Standby Task Force elected to feed its information to one map. It's administered by the Kathmandu Living Labs, which is also working with the humanitarian crisis group at OpenStreetMaps, Elliott says. But she adds that more coordination among online networks is needed.

Other issues remain, including protecting the privacy of disaster victims. And then there's the matter of how to respond to humanitarian crises amid armed conflict. The task force put together maps during the Libyan civil war in 2011 but grew uncomfortable, not knowing how the maps were being used. Since then the group has avoided conflict zones.

Some of the Nepal efforts, including its mapping of social media posts, are already winding down as aid groups spread into the countryside and more data stream in.

That doesn't mean volunteers can sleep easily. They may be haunted after a disaster by the people they couldn't aid from a distance, says Elliott: "You know they are there, they are dying and you can't get help there."