Accessibility links
Crowdfunded Campaigns For Nepal Are Huge. Is That A Good Way To Give? : Goats and Soda The earthquake has prompted hundreds of people to set up online campaigns. They've raised hundreds of thousands, often for groups based in Nepal. What do charity watchdogs make of all this?

Crowdfunded Campaigns For Nepal Are Huge. Is That A Good Way To Give?

Crowdfunded Campaigns For Nepal Are Huge. Is That A Good Way To Give? 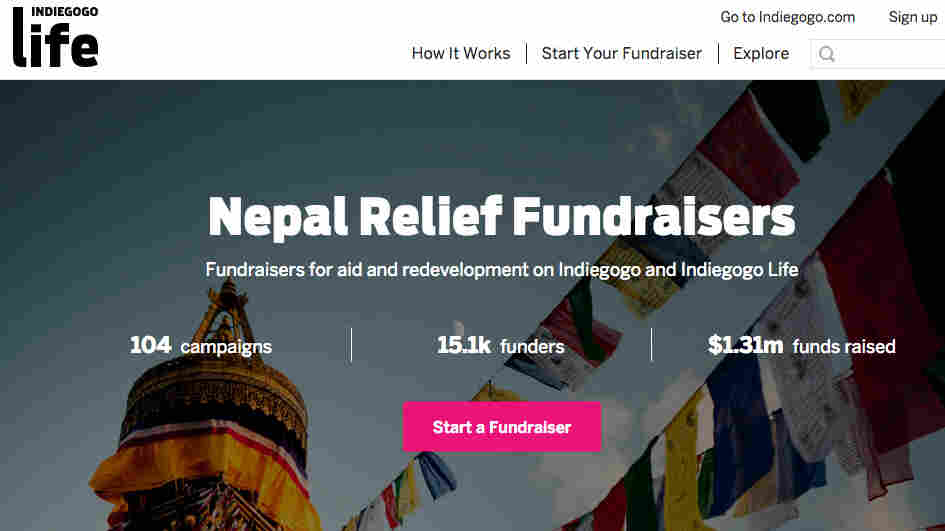 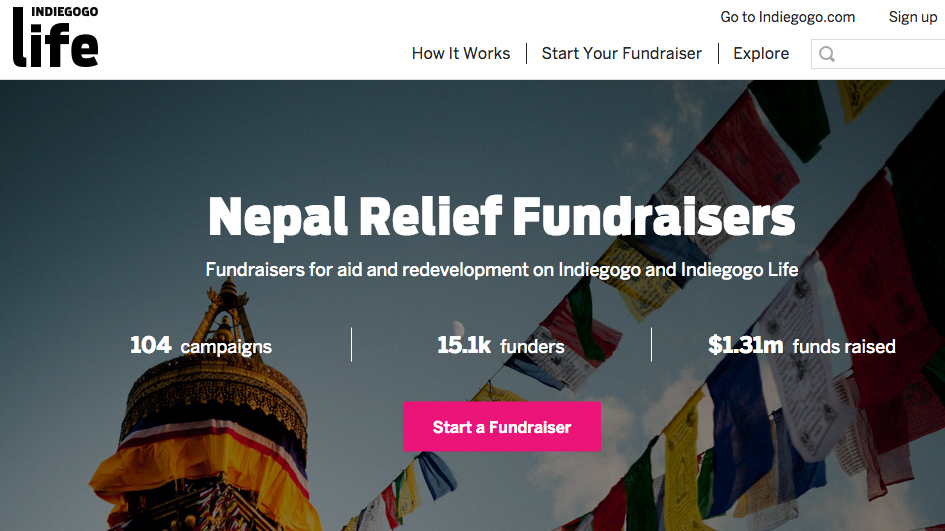 The Rules Of Crowdfunding

How It Works On sites like GoFundMe, Indiegogo Life and Crowdrise are popular in part because of their ease of use. A campaigner sets up a page for free with information about their cause, sets the deadline, then starts sharing via social media. Donors can use a credit card. When the campaign ends, the website transfers the funds to a designated account, sends a check to the individual behind the campaign or sends the money directly to a charity. Some campaigners opt for an all-or-nothing campaign to motivate donors: That means the goal must be met by a certain deadline or the cause gets nothing (and donors are not charged).

Pricing & Fees GoFundMe charges 5 percent per donation and WePay, the online payment service that the site works with, charges 2.9 percent for each payment plus 30 cents. GoFundMe announced last week it will donate its 5 percent fee from all Nepal relief donations to AmeriCares.

Crowdrise takes 3 to 5 percent of donations. Like GoFundMe, CrowdRise uses WePay, which takes an additional 2.9 percent plus 30 cents per donation.

The clock is ticking on Lokesh Todi's efforts to raise $150,000 for charities based in Nepal. That's what happens when you use social media. You set up a donation campaign on a site like Indiegogo Life (as Todi has done). Then you have a set amount of time to meet your goal. And as of 3 p.m. Wednesday, there are only 61 hours left. So far, the 28-year-old graduate from Yale University has collected over $130 ,000 from more than 1,600 donors.

Todi is part of a crowded crowd of crowdfunders using the web to appeal for small donations for a cause.

Crowdfunding was widely popular in 2012 after Hurricane Sandy. But the magnitude of mini-campaigns for the Nepal disaster is unprecedented, says Amy Sample Ward, CEO of a nonprofit technology organization called NTEN.

GoFundMe alone has more than 700 individual campaigns and 45,000 donors who've collectively raised $3.5 million for Nepal. And Todi's campaign on Indiegogo Life is one of more than 100. Some of Ward's own friends on Facebook are simply asking for people to send donations to their bank accounts.

Ward has some theories about the surge of crowdfunders.

First, the location of the disaster may have given that method a boost. Nepal is often a destination for tourists and trekkers. Many volunteers go there to help as well. So people are more likely to have a friend — or a friend of a friend — who's either working there or was affected by the quake. And those friends are often motivated to raise money. (Below: A tweet from a Nepalese YouTube star who's one of the many current crowdfunders.)

The familiarity helps, Ward says. Donating to someone who "you can almost picture going down the street to all their neighbors and making sure they are OK" makes donors feel as if they are likely to see tangible results.

It also helps that these fundraisers have goals that seem achievable. An individual campaign may be aiming for $10,000, $50,000, $100,000. "The closer one can be to the [goal] the more people will feel that they are making a difference," says Dr. Jen Shang, a philanthropic psychologist at Plymouth University in England. But she adds there's no evidence that donating to small campaigns makes a bigger impact on ground.

It's just that "with a big institution, it's harder to see how your $10 is helping when a million dollars is needed," says Sandra Miniutti, vice president of marketing at the charity watchdog Charity Navigator.

Still, Miniutti recommends donating to established charities because there's too much risk with individual campaigns. "There's no vetting in the front end and no insurance on [the] back end that people will actually use the money for what they say they will," she says.

And asking for donations via a check or direct transfer into his or her bank account is a huge red flag.

Her advice: "Generally speaking, don't give through these websites unless you know the [campaigner] directly."

Not during disasters, he says.

He believes an international aid agency that's dealt with disasters before is a better choice than a small charity. "You may have only one runway available for deliveries, and places may be inaccessible immediately because roads are now broken," he says. "Well guess what? If they are impassable to the staff at established charities, they're probably going to be impassable to other charities there."

The difference is that larger charities may be better equipped to find alternative ways to transport goods, he says.

Both nonprofit technology expert Amy Sample Ward and psychologist Jen Shang stress that the effectiveness of these small campaigns needs to be studied.

But sometimes crowdfunding and big charities hook up. On Indiegogo, a team of entrepreneurs and coders has raised nearly $37,000 on behalf of Oxfam America. "Why should we do this?" the organizers wrote on their campaign page. "Because the hard-working organizations on the ground don't have time."

"It certainly does not undermine our efforts, especially in the case of humanitarian emergency response," says Megan Weintraub, associate director of digital engagement for Oxfam America. "We have no ill-feelings about the ways other people are getting involved. It's just good that they are."

As for Lokesh Todi, who's just $20,000 shy of his $150,000 goal on Indiegogo, he says the money will be given to Nepalese-run charities working in the Sindhupalchowk district. "I wanted to make sure the local organizations that are here for the long term have the money to deal with the situation," he says from Nepal.

You Want To Go To Nepal And Help Out. Is That A Good Idea?

Right now, he's working with other young professionals and the Nepali branch of the nonprofit ChildReach to send supplies to remote villages in Sindhupalchowk. They're also coordinating with doctors who want to help. And he's keeping his donors updated with videos, photos and written notes.

When his campaign ends, he hopes the money will make a difference — even if it is only in a handful of villages. "Twenty thousand dollars is equal to 2 million Nepalese rupees, and that goes a long way in Nepal," Todi says. "If I can choose one small village and focus my energy on that and work with local NGOs I can make transformation happen."

In the end, it's all up to the donor, says Megan Weintraub from Oxfam. But the first step to donating is the same regardless of the platform: Do your research.