Accessibility links
How Bicycles Are Helping To Heal Rwanda : Goats and Soda This weekend, an Olympic-qualifying race will be held in Rwanda. It's a sign of how bikes are changing the country's image — and how Africa is making inroads in the Western-dominated cycling world.

How Bicycles Are Helping To Heal Rwanda

How Bicycles Are Helping To Heal Rwanda 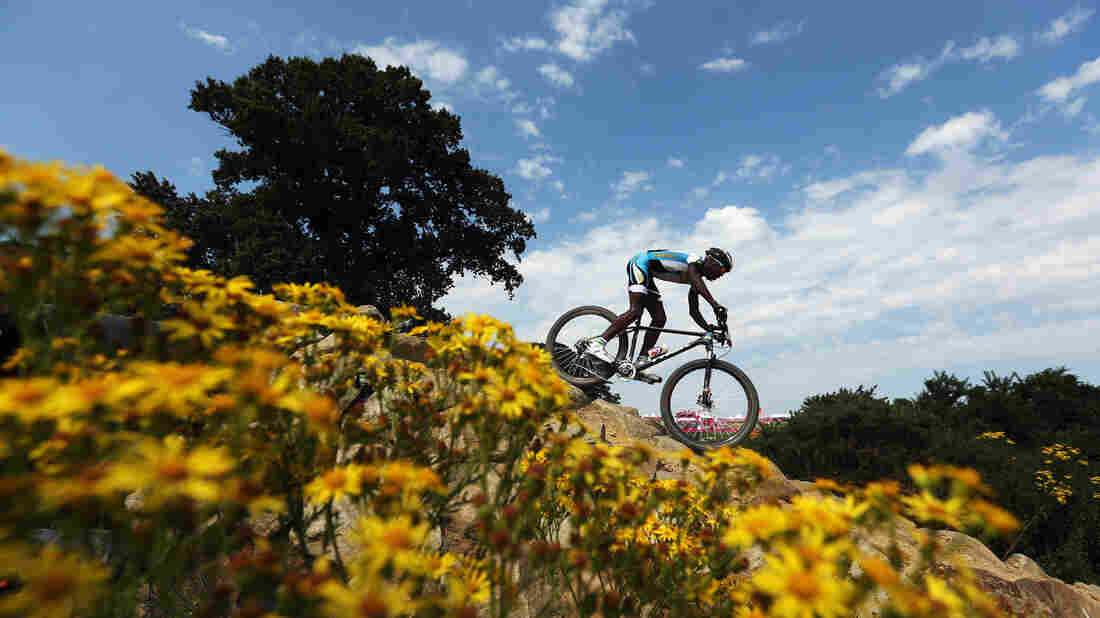 Adrien Niyonshuti of Rwanda heads down a field during the men's mountain bike race in the 2012 Olympics. Bryn Lennon/Getty Images hide caption 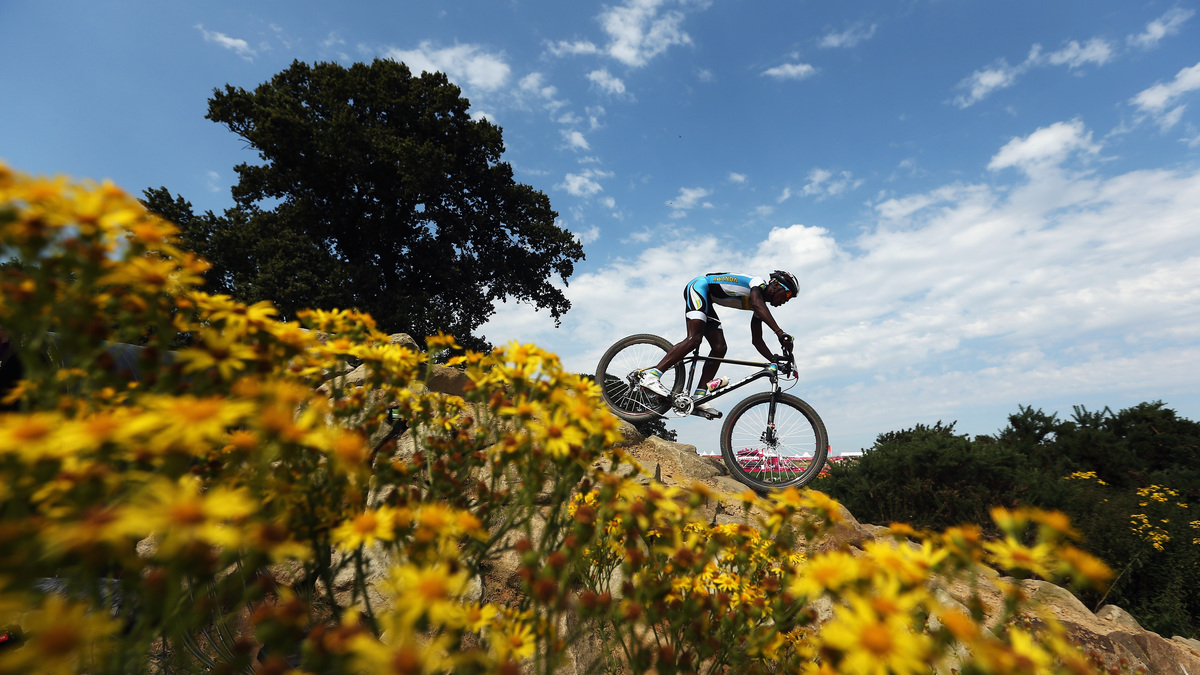 Adrien Niyonshuti of Rwanda heads down a field during the men's mountain bike race in the 2012 Olympics.

That's no small thing for a sport that's historically been dominated by Western men. And it's a huge thing for a country still branded by its 1994 genocide, in which 800,000 people were killed in 100 days. Twenty years later, that three-month period still defines Rwanda in many minds. 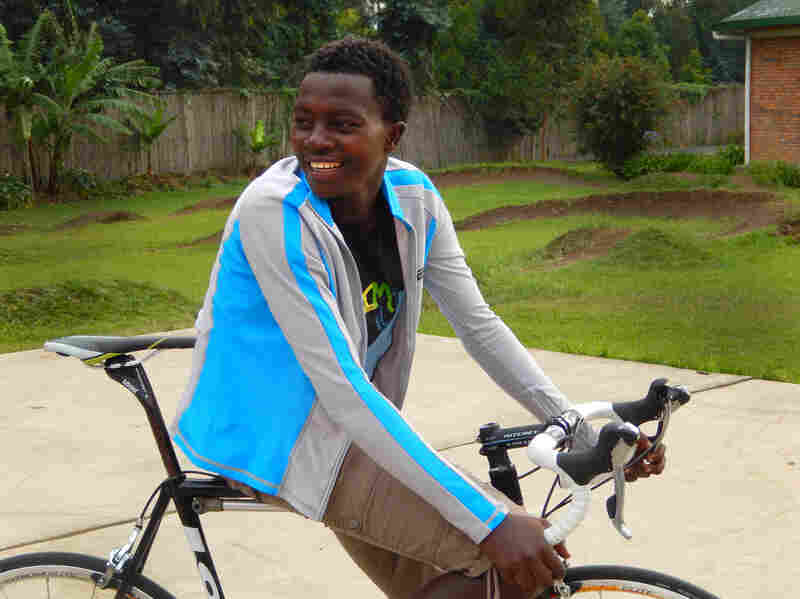 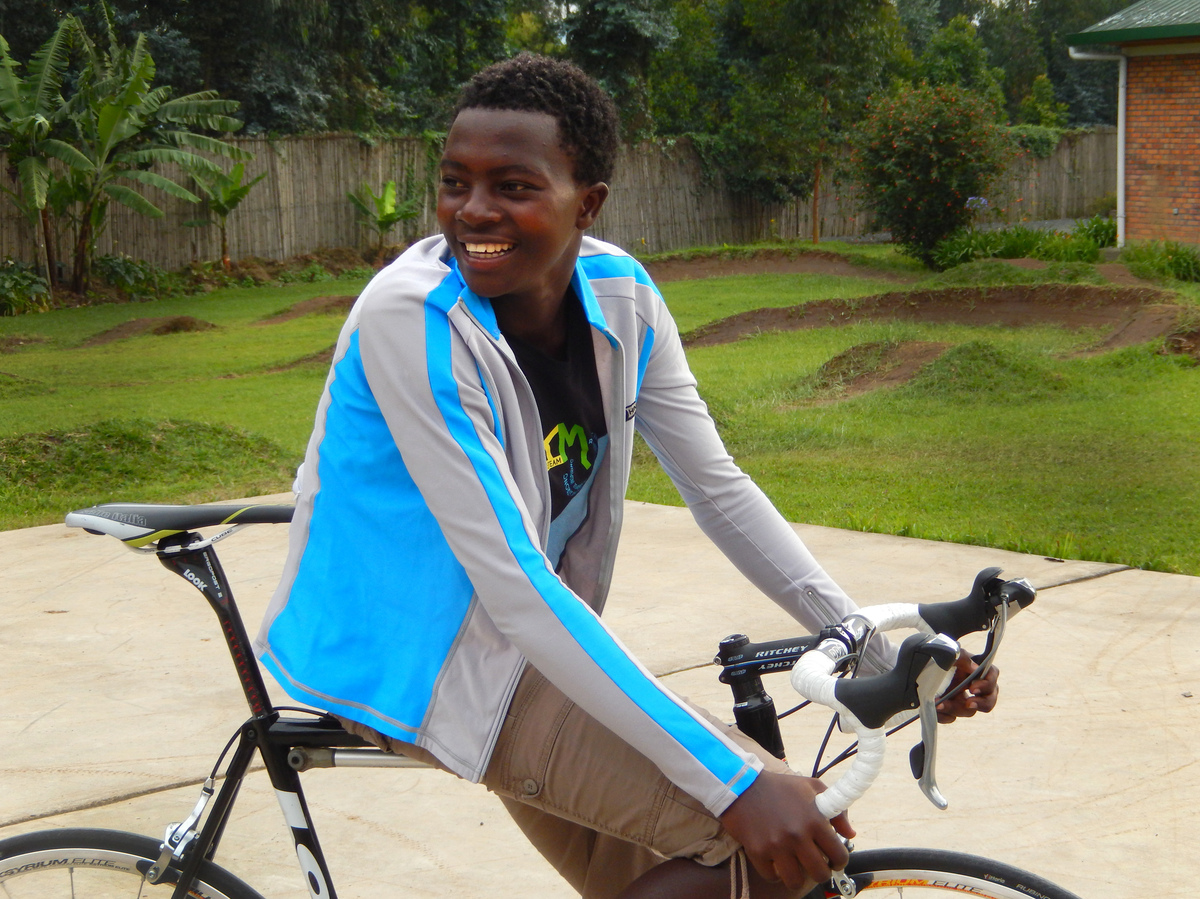 Now bicycles are helping to change the country's image — and are helping its citizens to heal as well.

Team Rwanda, a group of about 14 high-powered cyclists, is the key.

The team's roots stem from a 2006 visit to Rwanda by two U.S. cycling greats: mountain bike pioneer Tom Ritchey and Jonathan "Jock" Boyer, the first American to ride in the Tour de France, in 1981. The two were amazed at the latent talent they saw. Soon after, Boyer moved to Rwanda to develop a world-class team from scratch.

The riders now train at the Africa Rising Cycling Center in Musanze District in the Northern Province, near the border with the Democratic Republic of the Congo. Riders tool their bikes and hang their laundry in sight of the jagged peaks of the Virunga Mountains where Dian Fossey studied her beloved gorillas.

Most Rwandan cyclists come from rural villages with no previous professional coaching. The training center periodically opens its gates to young enthusiasts who want to test their skills on a Velotron, a computerized stationary bicycle that measures energy output — and raw talent.

For a Rwandan with potential, it takes five years of training and regular practice to go from village phenom to professional, says Kelsey Pope, an American who works at the center with her husband, former BMX racer Weston Pope. Why so many years? It takes a long time to build the strength and endurance to compete at a professional level.

Rwandan cycling has caught international eyes. The team was featured in the 2012 film, Rising From Ashes. That same year, in London, Adrien Niyonshuti became the first black African to compete in an Olympic mountain bike race. This March, Jeanne d'Arc Girubuntu, the country's top female rider, was invited to train at the World Cycling Centre in Switzerland.

"They're not used to eating a salad with 12 different vegetables on it," Weston says. But stomachs do adjust, and the cyclists start to crave salad.

Education is also emphasized at the camp. "Most of our riders come from limited education backgrounds," says Kimberly Coats, marketing director for the team. So they need to learn skills for international competition. English lessons emphasize "navigating airports, train stations, directions" plus "bicycle parts, body parts, how to explain how you feel."

Budgeting is important, too, since many riders "have large extended families to support, and they need to know how to handle their money," says Coats. Each cyclist is paid a salary that covers their cost of living as well as that of their families. (Team Rwanda is a nonprofit 501(c)3 with a host of corporate sponsors.) Plus, riders have the potential to take home race winnings.

The experience is transformative. "Now I am able to help my family," team member Samuel Mugisha said in an email. "They are helping me train to be an elite rider with the team and have a good future."

"I have received many things by being on Team Rwanda ... so many good things I cannot even tell you all of them," cyclist Abraham Ruhumuriza emailed. "Team Rwanda came as an answer to my prayers."

Success breeds more of the same. As Team Rwanda prospered, neighboring countries asked the organization for help. And so a few years ago Team Africa Rising emerged, an expansion of Team Rwanda, with riders from Ethiopia and Eritrea. "We began helping Ethiopia and Eritrea not only because of their depth and success in cycling" but also because of their war and border disputes, Coats says. "If Rwanda can come together as one team, so too can the cyclists of Eritrea and Ethiopia." 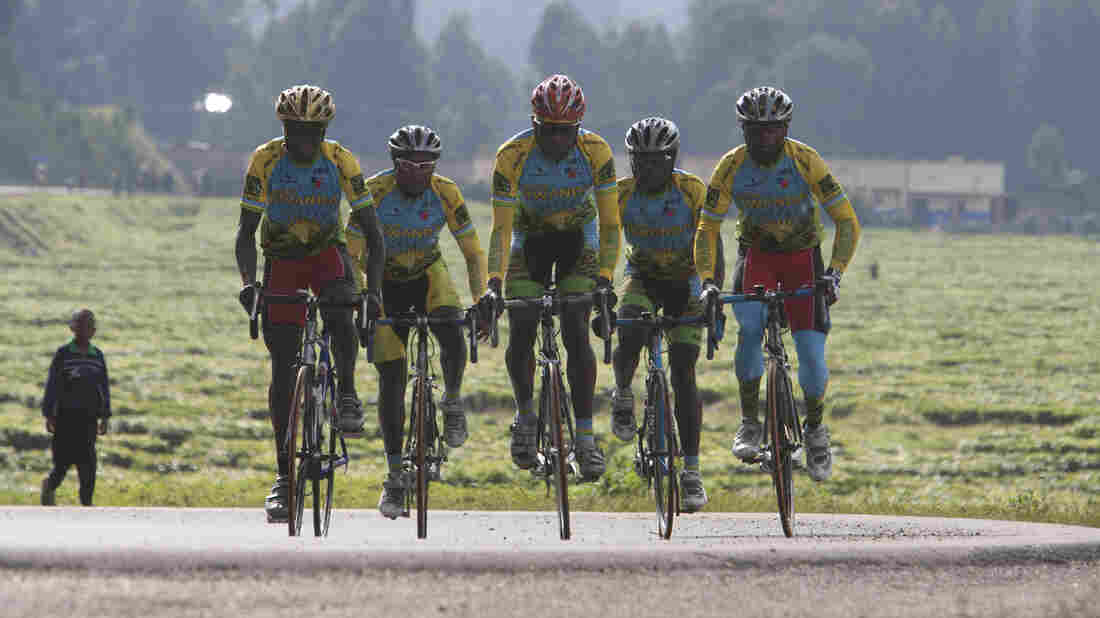 Team Rwanda rides together in a scene from the 2013 documentary Rising From Ashes. Courtesy of First Run Features hide caption 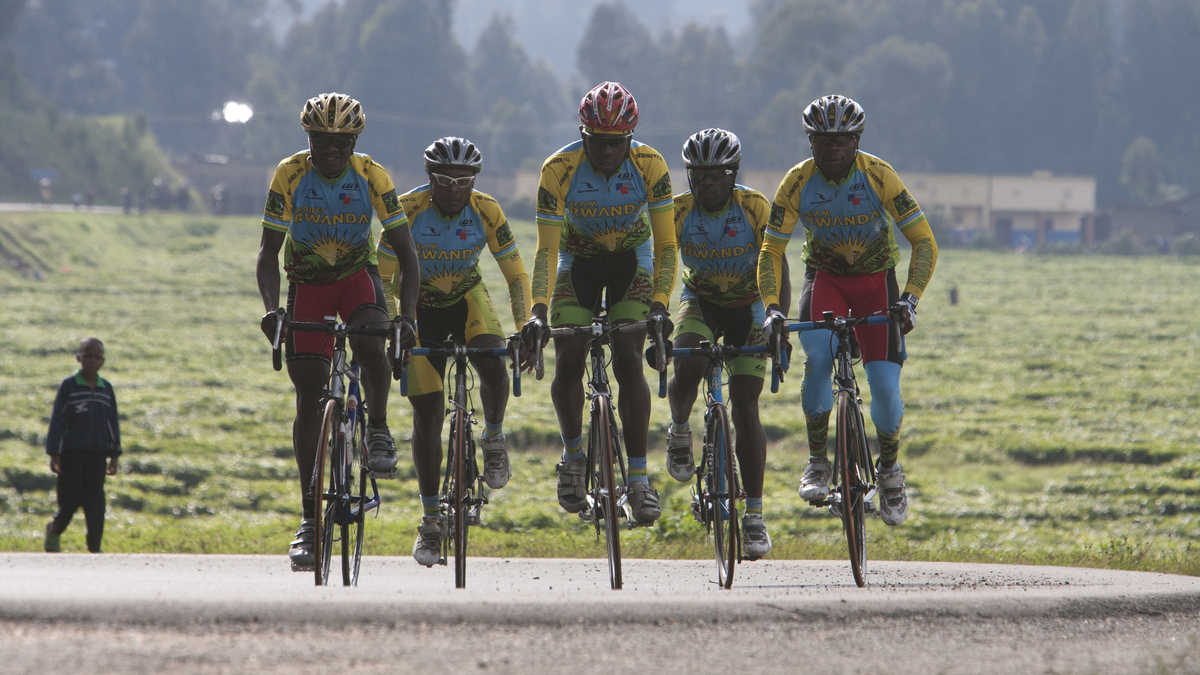 Team Rwanda rides together in a scene from the 2013 documentary Rising From Ashes.

Conflict isn't far from these compound walls. Just over the border, in the DRC, fighting sporadically erupts between rebels and government forces. But here, everyone works to assemble peace, Kelsey Pope says. The cyclists eat together, live together and pray together. Politics takes a back seat to teamwork, and the bike is a bridge to cultural understanding.

Reporting for this story was made possible by the International Women's Media Foundation African Great Lakes Reporting Initiative.