Accessibility links
He Couldn't Stop Painting Rocks — And Now He Has Inspired A Play : Goats and Soda Tonight, a new play by Athol Fugard opens off-Broadway. It's based on the story of Nukain Mabuza, a poor farm laborer in South Africa who was obsessed with creating a garden of painted rocks. 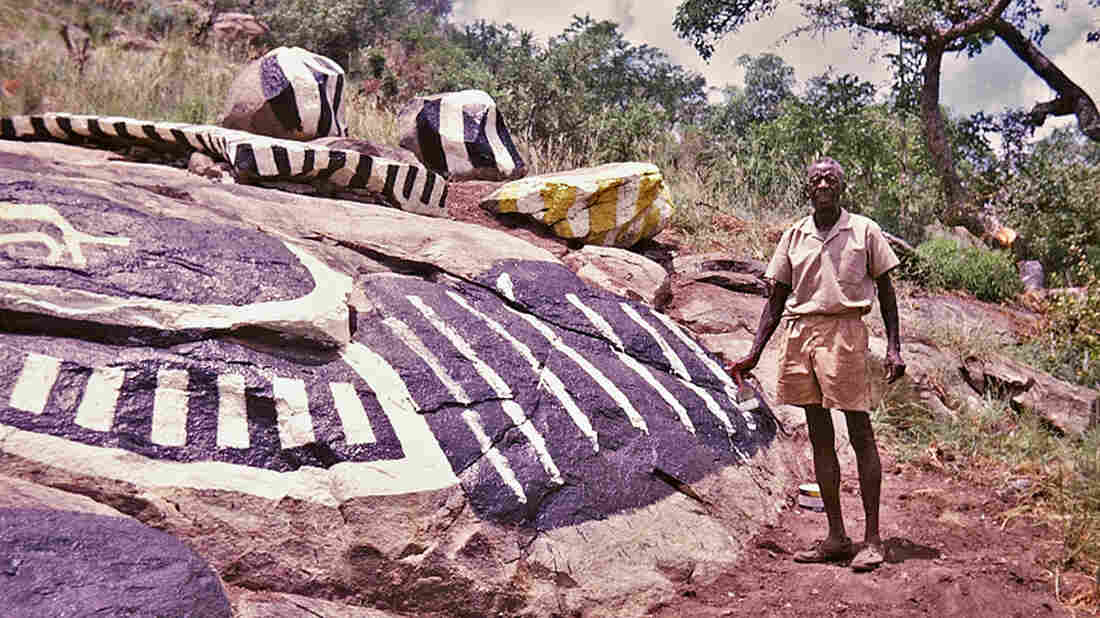 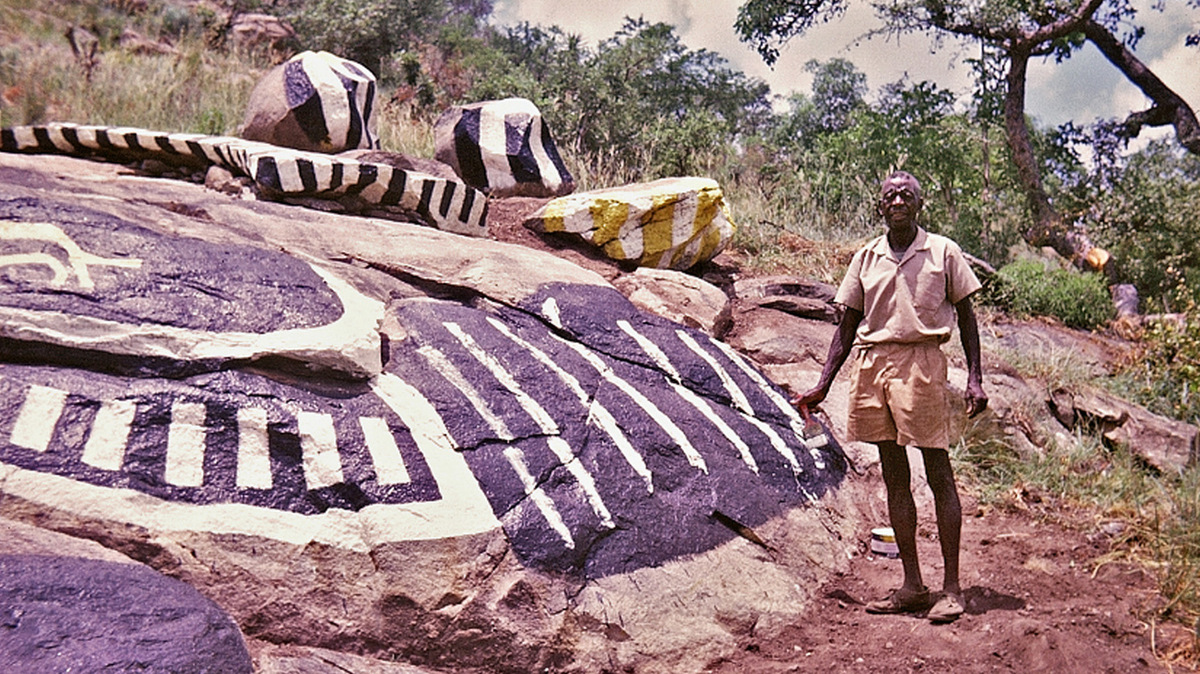 Nukain Mabuza paints his stone garden in the mid-1970s.

Two South African artists have come together on an off-Broadway stage in New York City: One is the world-famous playwright Athol Fugard, known for his dramas critical of the cruelties of apartheid. The other is the little-known artist Nukain Mabuza, who carved out an outlet for his creative vision despite the restrictions of apartheid — and now serves as the inspiration for Fugard's latest play, The Painted Rocks at Revolver Creek, opening May 11.

Fugard emphasizes in a program note that the play is not intended to be a biographical representation. But there are core similarities. In real life as in the play, Mabuza was an unschooled black migrant farmworker who worked obsessively on an elaborately painted stone garden in the 1960s and 1970s. Though deteriorated by the elements, it can still be seen today by anyone passing through the rural South African community of Revolver Creek, located between the town of Barberton and the southern border of the Kruger National Park. 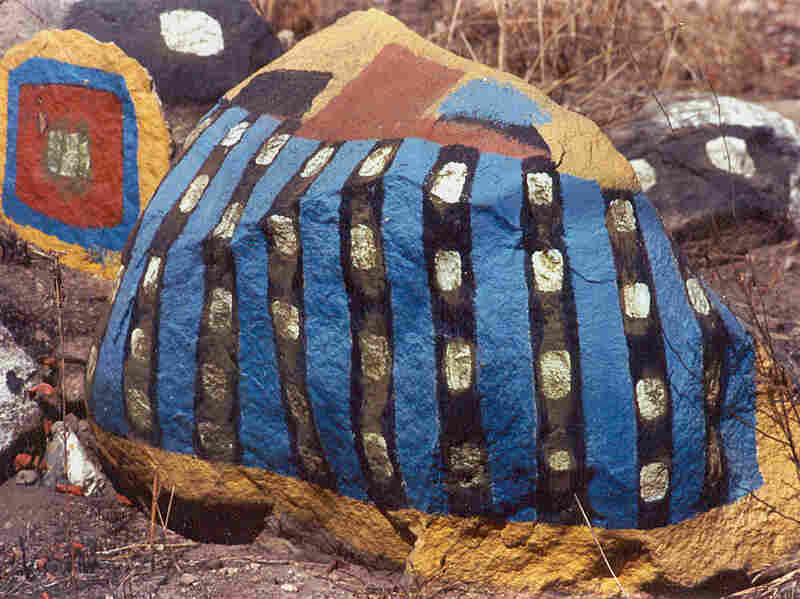 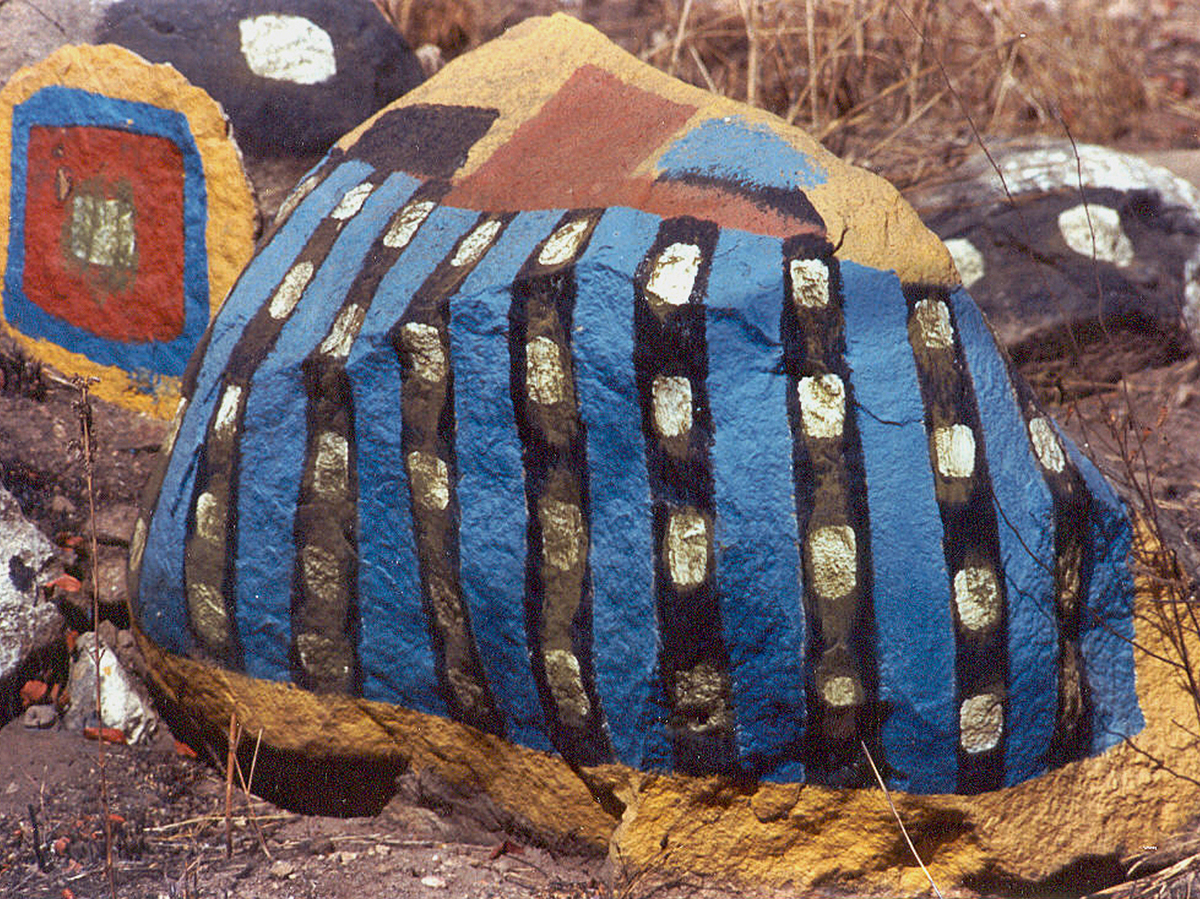 The artist brought vivid colors to the dun-colored landscape.

In life as in the play, too, Mabuza had no legal rights or claims to ownership of his hillside artistry; the land belonged to the Afrikaner farmers for whom he worked and who allowed him to live there.

The stage set's yellow-and-black painted rocks can only hint at the expanse and scale of Mabuza's actual garden. Photographs of it in its heyday show a vast array of stone outcroppings and embedded boulders decorated with bold zebra-like stripes, geometric patterns in bright hues across the color spectrum, and pictograms of birds and animals. Though inanimate and set against the scrub brush of a rocky hillside, it seems mysteriously alive, evoking an otherworldly wonderland amid the scrappy grass and trees. 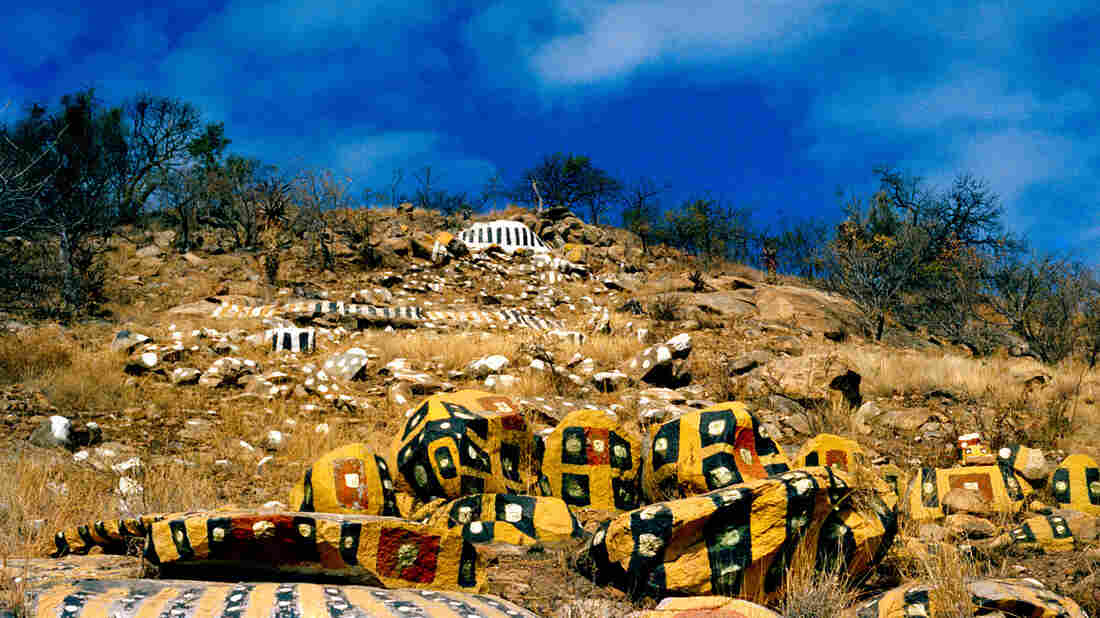 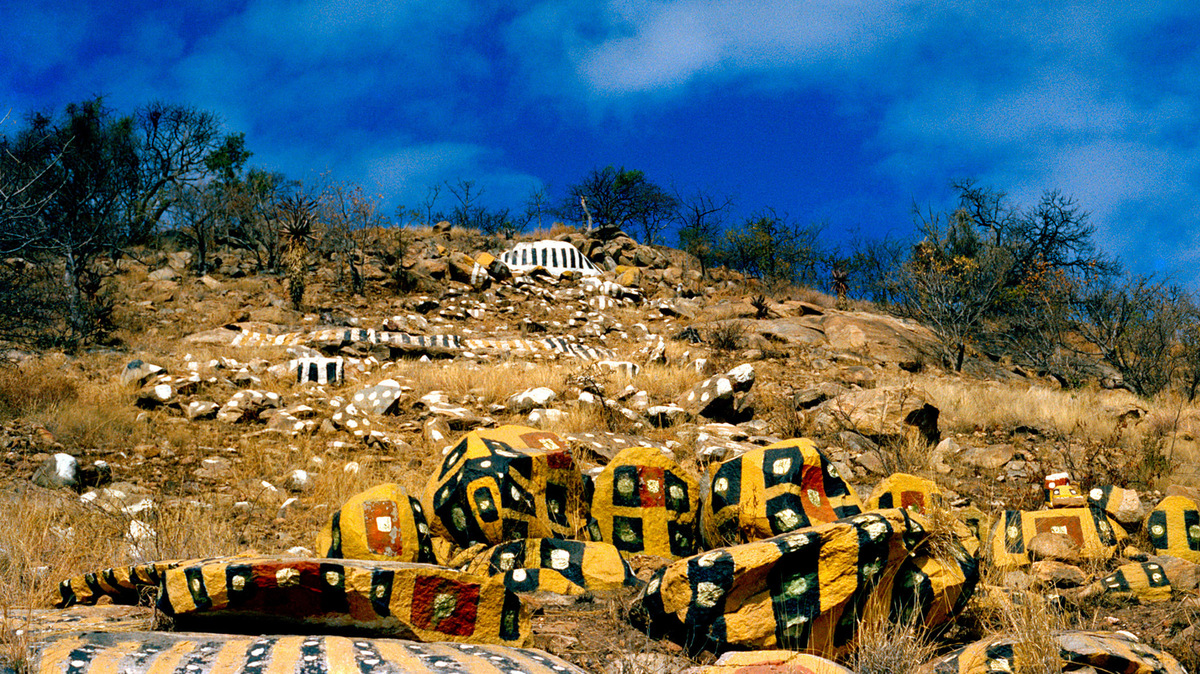 Mabuza is often described as an outsider artist, but that term should not be taken as a slight, says JFC Clarke, an artist and photographer based in Pretoria, South Africa. Clarke first discovered Mabuza's work in the 1980s and is the author of The Painted Stone Garden of Nukain Mabuza.

Outsider art refers to the work of untrained, self-taught artists whose creative vision goes outside (hence the name) the mainstream conventions of art. Outsider artists are also often called visionary artists. In Mabuza's case that meant envisioning a dry and rocky hillside as a flowering garden overflowing with color. And that, says Clarke, showed "genius, to take a bush-covered hillside that had no obvious potential whatsoever and devise a way to create an environmental artwork."

Like other outsider artists, Mabuza was also an outsider to the society in which he lived. He was born in Mozambique and crossed the border into South Africa, probably illegally, in the early 1960s, says Clarke. He found work as a farm laborer in the one-time mining community of Revolver Creek and built a hut for himself on a stretch of unarable boulder-filled hillside that the owners had set aside for their workers. He lived alone and never married — because, he allegedly said, a wife would eat all his money for paint.

And maybe so: By the mid-1960s, Mabuza was spending as much of his minimal wages as he could on paint, says Clarke. "He would work and paint and paint and work and starve, basically. But his "garden" also grew, both larger in scope and more sophisticated in decorative design. And he became "extremely skilled" and masterful, says Clarke. "It would appear at first glance that these geometric patterns are simple to paint." But look more closely and you'll see the care and precision with which "he layered paint until it took on a tactile quality" until those layers "built up a patina of color and textures" that he describes as "seductive."

In 1975, a South African admirer named Rene Lion-Cachet arranged for a paint supplier to donate a large surplus of paint. By then, Mabuza's painted garden had become something of a tourist attraction, with buses stopping by. Visitors gazed in awe and took photographs. "He never charged; he was always welcoming, even to people who did not donate," says Clarke.

Between the tourists and the donated paint, Mabuza was able to quit his day-laborer job and devote himself to his art. Even though he did not own the land, the white farmers who did gave him permission to pursue his passion. Though they regarded him as eccentric, they "let him be," says Clarke.

About five years after that, Mabuza abandoned his garden, and in 1981 he took his own life. Clarke explains that he had evidently declared that "he wanted to be buried in his stone garden, but this was not acceptable in traditional practice and there was a confrontation." Mabuza was buried in a pauper's grave. Despite intermittent attempts to reconstruct his masterwork it has not been maintained.

Still, Mubaza's recognition is on the upswing. In addition to Fugard's play, a newly opened Barbeton Gateway garden near the site of Mabuza's original stone garden pays tribute with a decorative stone garden inspired by his work. "His name will never be forgotten because his work has taken off in a way that is remarkable by any standard," says Clarke, who was a consultant for the new garden. "He was a masterly painter. He had mastered his craft."