Accessibility links
Home-Brewed Morphine Is Around The Corner : Goats and Soda What if microbes could ferment sugar into narcotics, like the way yeasts make beer? That day is quickly approaching. This week scientists report all the steps needed to make morphine in yeast.

Home-Brewed Morphine Is Around The Corner

Home-Brewed Morphine Is Around The Corner 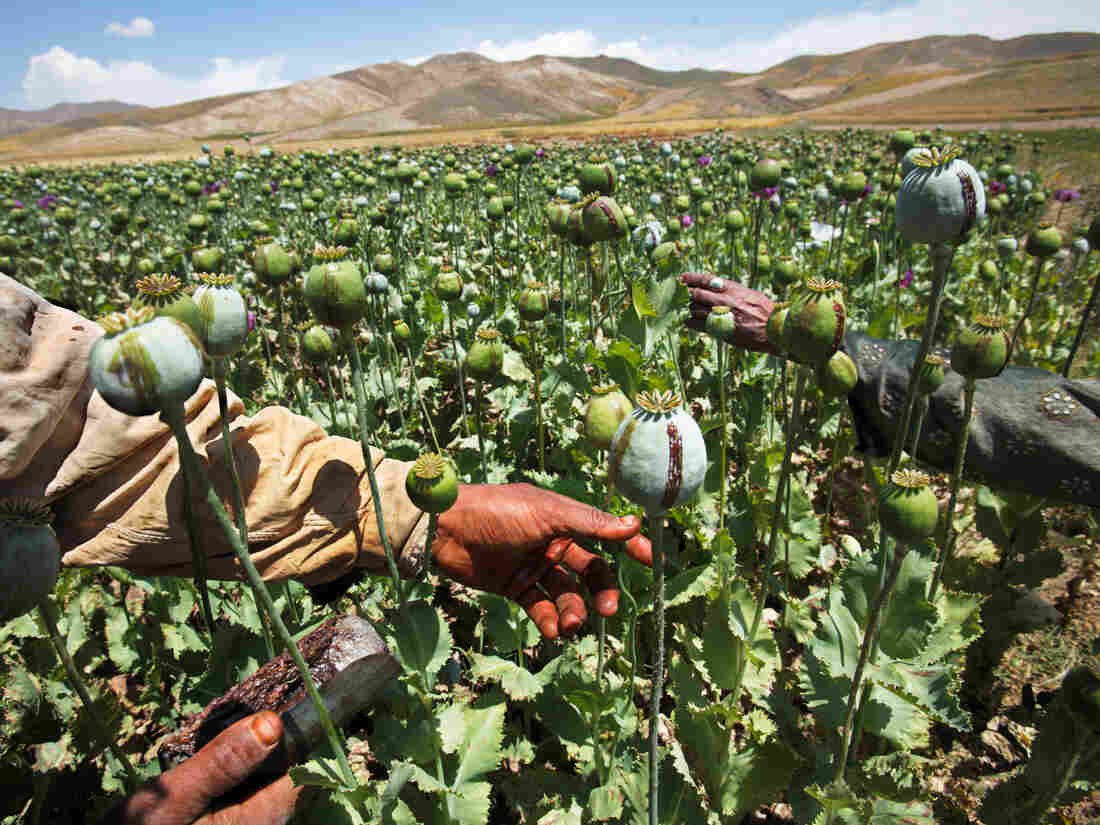 Families harvest poppy bulbs in the Badakhshan province of Afghanistan. To collect the opium, they score the bulbs and let the milky substance ooze out. The dried residue contains about 10 percent morphine. David Guttenfelder/AP/National Geographic hide caption 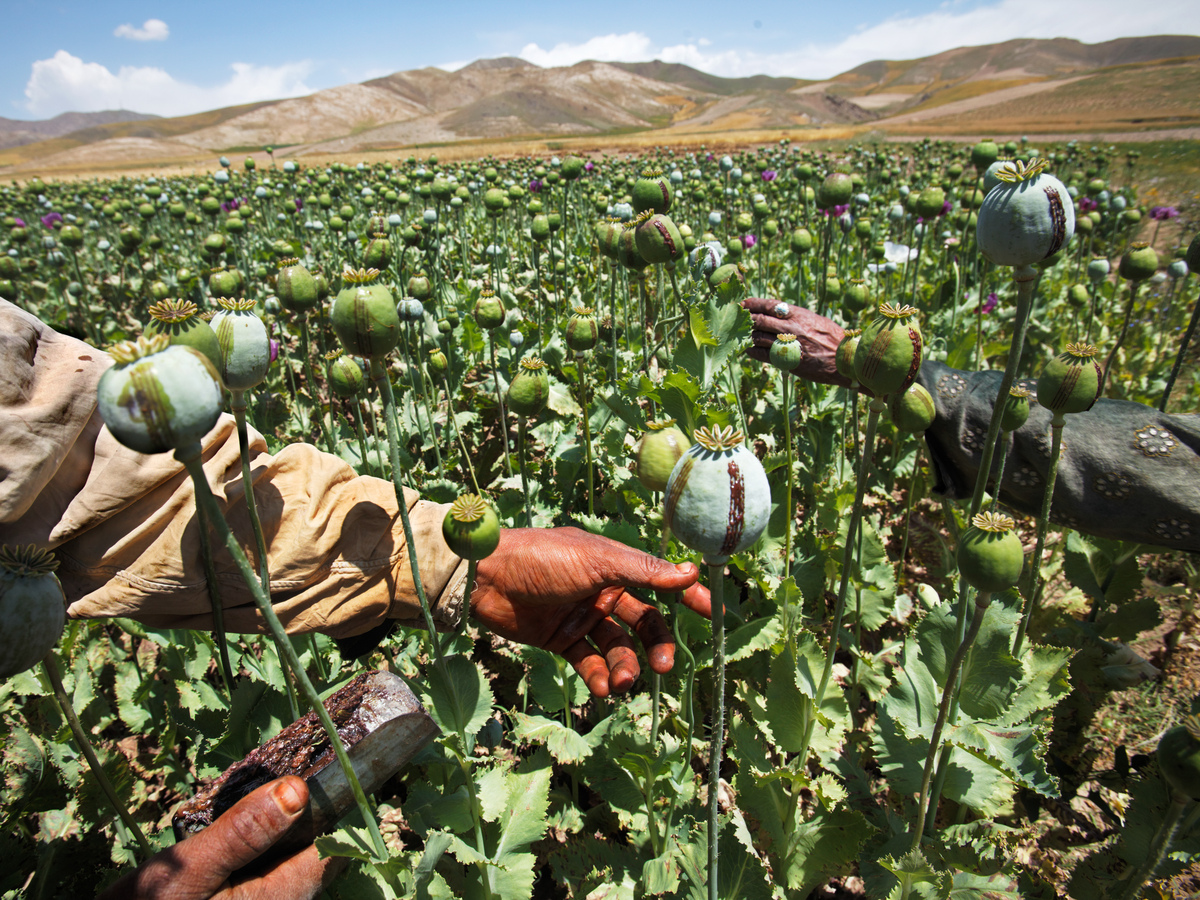 Families harvest poppy bulbs in the Badakhshan province of Afghanistan. To collect the opium, they score the bulbs and let the milky substance ooze out. The dried residue contains about 10 percent morphine.

Making morphine — or heroin*, for that matter — isn't easy. You have to know a bunch of fancy chemistry to synthesize the drug from scratch. Or you have to get your hands on some opium poppies and extract morphine from the flowers' milky juice.

The latter is tougher than it sounds. Sure, the beautiful flowers grow across millions of acres around the world. But farming and trading poppies are tightly regulated both by laws and by drug kingpins.

In the end, very little morphine makes its way to poor countries. So even patients recovering from major surgery or suffering from deadly cancers often go without pain relief in the developing world.

But what if yeast could brew morphine from sugar? You know, the way yeast ferments grapes and grains into wine and beer? The little critters would eat up sugar and turn it into the drug. A shot of this home brew could be as powerful as a pill or two. 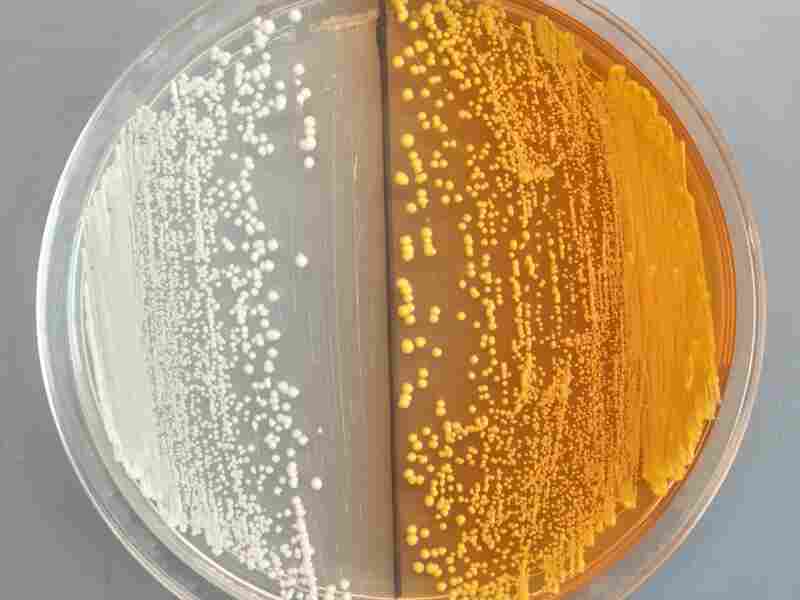 Scientists inserted an orange pigment into yeasts (right) to help find the missing enzyme needed to complete the synthesis of morphine in the microorganism. Courtesy of William DeLoache at UC Berkeley hide caption 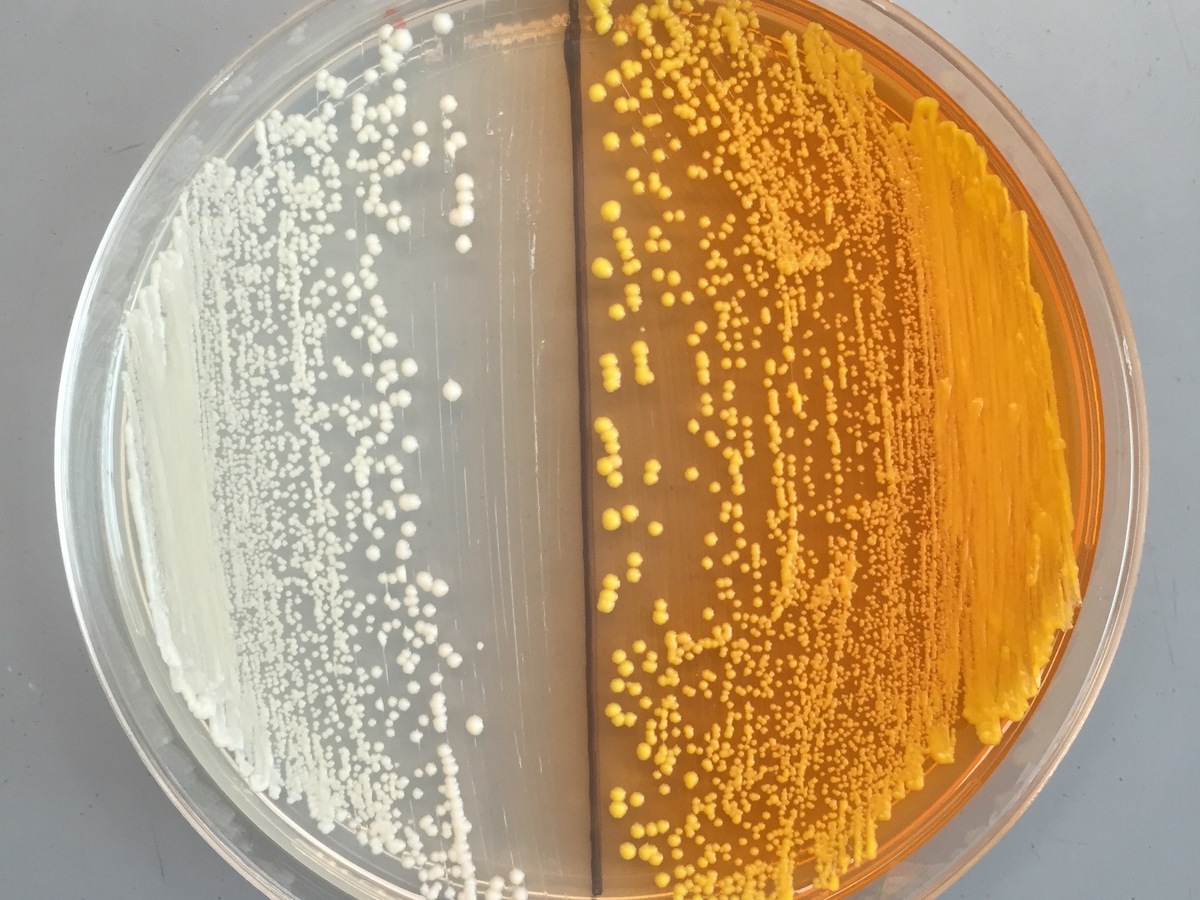 Scientists inserted an orange pigment into yeasts (right) to help find the missing enzyme needed to complete the synthesis of morphine in the microorganism.

That day is approaching faster than scientists thought.

After seven years of research at four top labs, scientists have figured out all the steps needed to create yeast that brews opiates.

This week bioengineers at the University of California, Berkeley report the last missing link in the chemical pathway to make morphine in yeast.

Now the pieces just need to get connected up and inserted into one yeast strain, says John Dueber, who led the study. "It's not going to be easy to do that," he says. "But if a talented lab focused on the goal, we're looking at about two to three years."

Then "it could be relatively easy to brew morphine," Dueber says.

And then the imagination goes wild: Backyard brewing operations could make kegs of narcotics. DIY morphine kits could ship directly from Mexico. And morphine cocktails could pop up at sketchy tourist destinations around the world.

That's definitely not what Dueber had in mind while working on the genetically modified yeast. Instead, he wanted to make one of the building blocks of morphine (called S-reticuline). This molecule can be transformed into thousands of potential drugs, he and his team write this week in the journal Nature Chemical Biology.

"Because we can reprogram the yeast easily," Dueber says, "we might be able to make better cancer therapies, antibiotics or opiates that aren't so addictive."

But Dueber and his colleagues are concerned about the repercussions of the home-brewing technology. He thinks it's not too early to map out regulations for the narcotic-making microbes.

Several prominent political scientists agree. The designer yeast is likely to be more useful for drug cartels than pharmaceutical companies, Kenneth Oye at the Massachusetts Institute of Technology and his colleague wrote Monday in a commentary for Nature.

Pharmaceutical companies already have a cheap, steady supply of opium from legal poppy farms in India, Turkey and Australia. "That [supply] chain will be hard to disrupt," The New York Times points out. "Thousands of small farmers, their bankers and equipment suppliers depend on the sales, and they have political clout just as American corn farmers do."

But drug cartels have to smuggle poppies out of southeast Asia, Afghanistan and Mexico. And they would probably be happy to cut out this dangerous step and simply brew heroin at production facilities in Europe and North America, Oye and his colleagues note.

And of course, the technology could open the door for small-scale operations that fly under regulators' radar. "In so doing, it could dramatically increase people's access to opiates," Oye and colleagues write.

Such changes could make the U.S.'s current problem with heroin worse. But in developing countries, where analgesics are scarce, small-scale opiate production could be a help.

Right now genetically engineered yeasts make a whole array of useful compounds, from perfume scents and food flavors to malaria drugs and vitamins. Companies can grow, buy and trade the critters as they wish.

Oye and his colleagues want the government to regulate some of these organisms the way they regulate dangerous bioweapons, such as anthrax and smallpox. For instance, allow only certain labs to grow the yeast, make it so the microbes require special food to grow on, and tag the critters with unique DNA so officials can track them.