Accessibility links
It's A 'Year Of Fear' For Kids, U.N. Says. Can We Make Things Better? : Goats and Soda Gordon Brown of the U.N. said it's the worst year for refugees since 1945, and cited a litany of other miseries for youth. We asked experts what can be done to make 2015 a little less horrible. 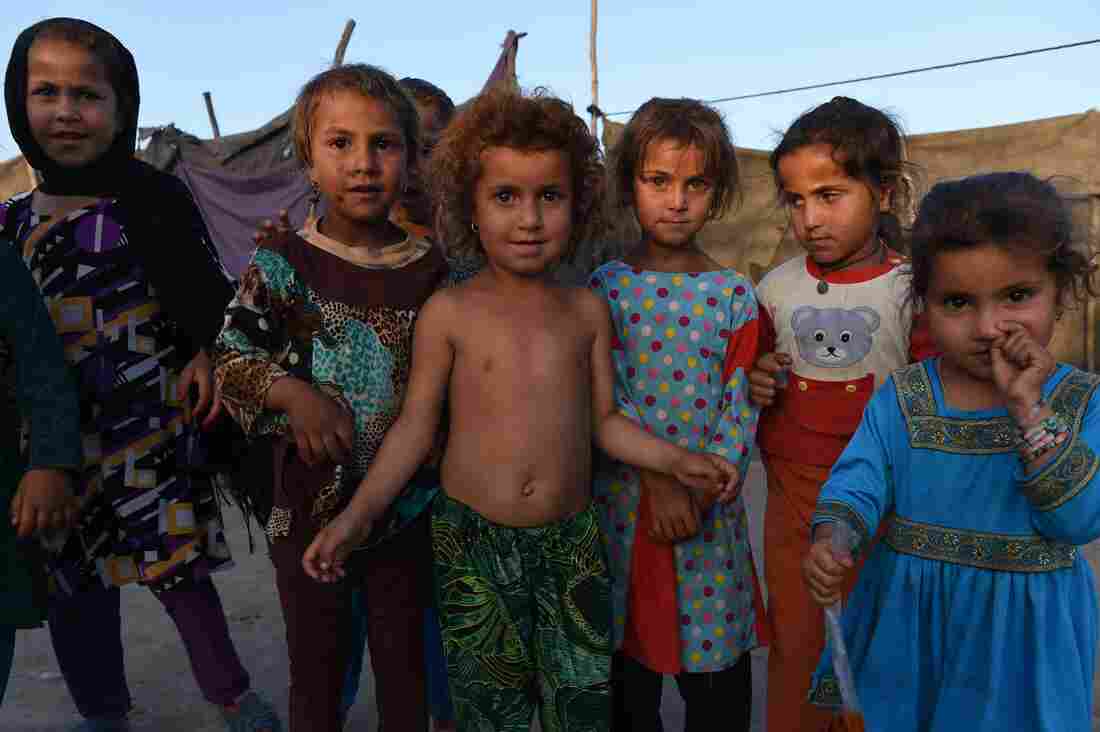 Afghan children look on at a refugee camp in Jalalabad on May 3, 2015. Like thousands of Afghan returnees, Neik Mohammad became unwanted in Pakistan after a Taliban massacre at a Peshawar school, forcing him to return home to a life of misery and fear in a squalid refugee settlement. SHAH MARAI/AFP/Getty Images hide caption 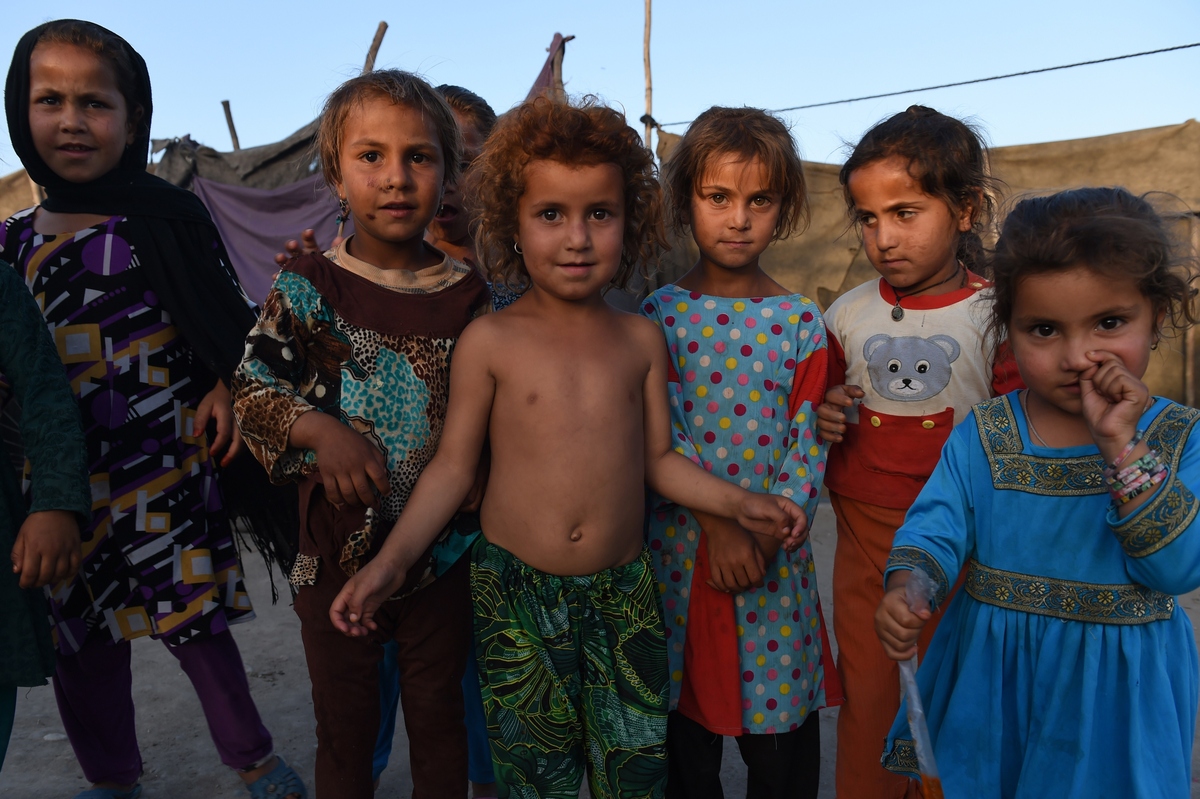 Afghan children look on at a refugee camp in Jalalabad on May 3, 2015. Like thousands of Afghan returnees, Neik Mohammad became unwanted in Pakistan after a Taliban massacre at a Peshawar school, forcing him to return home to a life of misery and fear in a squalid refugee settlement.

It's a "year of fear" for children.

That's how Gordon Brown put it in a speech this month. He's the former British Prime Minister who is now the U.N. special envoy for global education. And he's worried about kids.

According to Brown, there are 38 million internationally displaced persons and 16.7 million refugees, and more than half are youngsters.

In refugee camps and in disaster scenes like post-earthquake Nepal, kids are especially vulnerable. Their schooling may have come to a halt. They may be forced to work and earn money for their family. And in trouble spots, "it's open season for traffickers," Brown said, who snatch girls from the streets.

One: Is this really the worst year for children as Brown said?

"I don't mean to downplay the misery for millions of kids this year," says Charles Kenny, a senior fellow at the Center for Global Development and the author of Getting Better: Why Global Development is Succeeding, and How We Can Improve the World Even More.

But he points out another perspective: "I would rather be born this year than any other year in history." Kids have a greater chance of surviving the first five years of life, he says. The percentage of kids in school is high ("if not high enough"). There are "all sorts of ways that the world is better for children than it was."

Nonetheless, he stresses, "That's not to say it couldn't be a lot better. The fact that we can make progress makes it all the more disgusting that we haven't made more."

So on to question two: What can we do? Not long-term goals but 2015 goals. If the world wants to spend some cash to improve the lot of youth, here are a few suggestions from child advocates.

They need some place to hang out. To play with friends. To talk about any problems they're having. Maybe do a little art therapy — draw pictures of what they've been through. Have a snack (so parents don't have to worry about them going hungry). The space itself might be inside a tent, with, say, two sessions a day for 75 to 100 kids at a time. The main cost would be staff — maybe three professionals, aided by volunteers from the community.

(Sources: Heather Simpson of Save the Children, Lauren Fisher of World Vision and Anne Goddard of ChildFund).

Little kids get more attention than older kids. That's just the way the world works, and it's true in refugee camps as well. But teenagers have their own set of needs — and the top priority for displaced kids may be giving them a vision of their future. That means setting up a place where mentors can teach them vocational skills but also the kind of leadership skills that are essential to navigate the workplace. And it wouldn't hurt to add a gym or sports programs.

In a refugee camp, the nearest toilet might be 15- or 20-minute walk from the tents where families live. "Girls are often assaulted," says Anne Goddard, president of ChildFund. A simple solution is to give out solar lamps. "Dark corners are far more dangerous for anybody," says Goddard, who's heard girls say they feel safer when they have a light in hand.

"Simply pay parents to make better decisions on behalf of their kids," says Kenny. In programs in Brazil and Mexico, parents were given a stipend if they got their kids vaccinated and kept them in school instead of working. The insider name for this type of program is "conditional cash transfer." How much cash should be transferred? It's hard to come up with an exact figure because expenses vary in different countries, but a "dollar a day per kid would do a huge amount of good," says Kenny. And if kids are in school, he says, they're less likely to engage in sex or marry at a young age.

A Change In Legal Status

The best thing for refugees is to get them out of refugee camps. How do you do that? By changing the legal status of refugees. If they're reclassified as "migrants," says Charles Kenny, they may be able to move to another country. Not necessarily the country that's hosting the camp (which may be a low-to-middle income country) but to wealthier countries where the parents can find jobs and health care is available. "If you want an instant solution [to the problem of refugees]," he says, "migration is pretty much it."

Set Up A Neighborhood Watch

Traveling to and from school can be risky for kids in conflict zones. In some communities, neighbors agree to alert each other if they hear of potential dangers. They also serve as chaperones for students, says Heather Simpson of Save the Children.