Accessibility links
South Korea Struggles To Contain Deadly MERS Virus' Spread : Goats and Soda Health officials in South Korea are coming under fire after cases of Middle East respiratory syndrome, or MERS, swelled from one to 13 inside of two weeks. 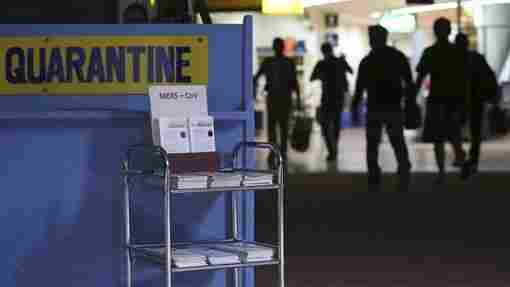 In this photo from 2014, passengers walk past the Middle East respiratory syndrome quarantine area at Manila's International Airport in the Phillipines. The virus is now raising public concern in South Korea. Aaron Favila/AP hide caption

A deadly virus with no known cure — Middle East respiratory syndrome, or MERS — has infected 13 people in South Korea since mid-May. The fast spread of the disease, from the first case confirmed on May 20 to more than a dozen by Saturday, is prompting criticism of health officials for not moving faster to quarantine suspected patients.

"We will set up a tighter quarantine system to dispel public concern," Health Minister Moon Hyung-pyo told The Korea Times. "Since the first case was found, we tried to keep it under control. But the moves weren't enough."

According to health officials, the first confirmed case in South Korea was found in a 68-year-old man who traveled to Bahrain in April and May. He returned to South Korea via Qatar. Since then, the virus has spread to victims with whom he came into close contact, including a nurse and other hospital patients.

Korea's outbreak of MERS is the largest among non-Middle Eastern countries.

MERS is from the same family as the virus that triggered China's 2003 outbreak of severe acute respiratory syndrome, or SARS. Scientists first identified it in 2012, and since then, more than 1,100 cases have been reported in 23 countries, with the bulk majority of cases occurring in the Middle East.

So far, not only is there no known cure, there's no vaccine to prevent it, either.

"We should have checked more actively and broadly on family related issues. We are deeply sorry about that," said Yang Byung-kook, director of the Korea Centers for Disease Control and Prevention.

Reuters picks up the Chinese end of the story:

"Chinese state broadcaster CCTV said that authorities in Guangdong province found the Korean man on Thursday and isolated him in a hospital for treatment. They also isolated 35 people who had come in close contact with him, though none has yet to shown symptoms."

Suspected patients are supposed to stay at home or at ministry-designated hospitals after coming into close contact with someone with MERS. The Korean Health Ministry says it plans to fine medical staff who do not report suspected cases to the government, and those who refuse to have tests even after showing MERS-like symptoms, which are fever, cough and shortness of breath, will face fines of $1,800.