Accessibility links
Climate Change-Ready Rice Keeps Farmers' Fields Fertile : Goats and Soda Climate change has made some soil in Bangladesh more salty, so many farmers have had to leave fields fallow. But what if there were rice varieties that could naturally tolerate the salty conditions? 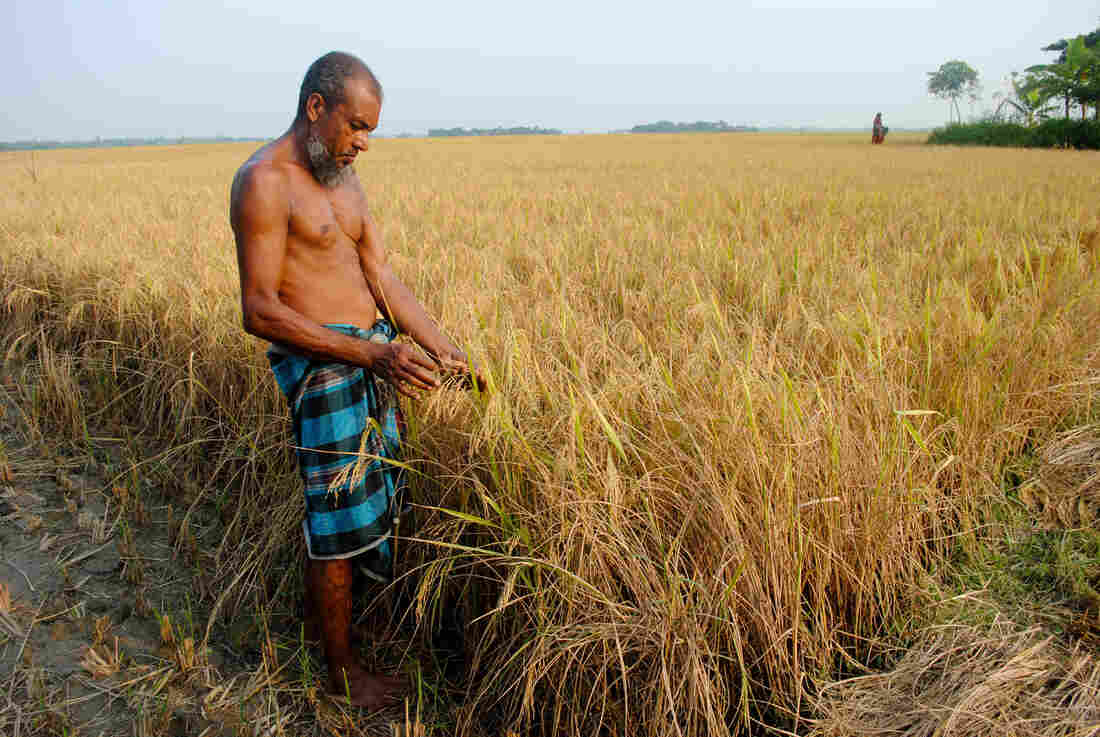 A farmer in southwest Bangladesh holds ripe rice that can grow in saline water. Amy Yee for NPR hide caption 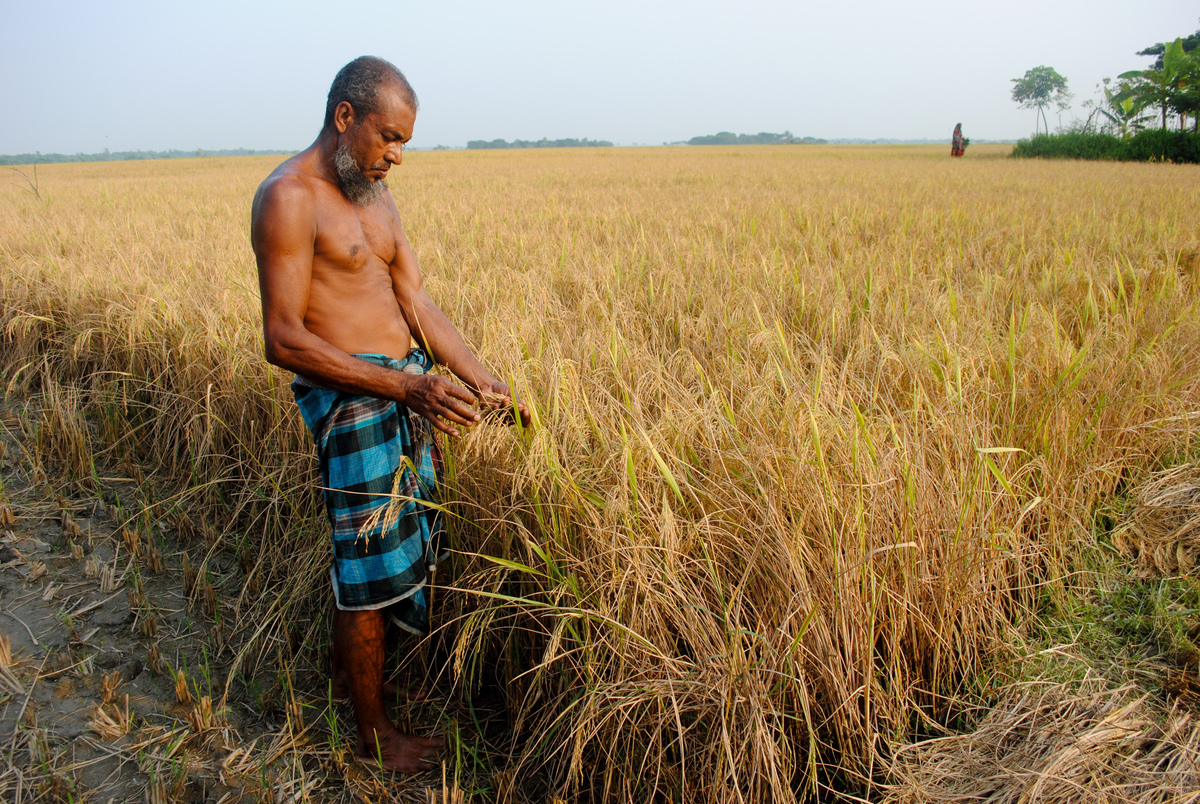 A farmer in southwest Bangladesh holds ripe rice that can grow in saline water.

But in the village of Gholgholia, rice in one paddy grows unevenly. The leaves are dry and brown. And there are bald patches between clumps, like the agricultural equivalent of a slightly mangy dog.

This is the result of salty soil. Sometimes it's so hard to coax rice into growing in the soil that farmers leave fields fallow.

Climate change is one reason farmland in Bangladesh is becoming increasingly saline. This is especially the case in the coastal south, which was traditionally the country's rice basket. Across the country, hundreds of thousands of acres of land lay fallow. Production of rice and other salt-sensitive crops, such as potato and mustard, has decreased.

"A lot of land is fallow because of salinity," said Timothy Russell, head of the Cereal Systems Initiative for South Asia, or CSISA, in Bangladesh.

Russell says there's a potential fix for the problem: Plant a variety of rice that's naturally resistant to salty soil.

"If you can bring in salt-tolerant rice or other salt-tolerant crops, like sunflower, you can utilize the land," Russell says. "That's the dream."

And it's slowly becoming a reality.

Since 2011, about 180,000 farmers have received saline-tolerant rice seeds and training on how to grow them. It's part of a program sponsored by three nonprofits: the International Rice Research Institute, the World Fish Center and the International Maize and Wheat Improvement Center.

Bangladesh is the world's sixth-largest rice producer. Rice accounts for 70 percent of calories consumed by its population of 160 million.

Agriculture that can withstand climatic threats is especially important in Bangladesh. The country is a low-lying river delta and thus is vulnerable to floods and violent storms. It is also one of the world's most densely populated countries: Imagine more than half the U.S. population crammed into an area the size of Iowa.

Scientists at the Bangladesh Rice Research Institute created the new varieties by crossbreeding rice varieties that were already naturally resistant to salty soil. So they're not genetically modified plants.

The seeds are free for farmers, but many are reluctant to try new plants. So, agricultural scientists from the CSISA grow the rice on test plots to show farmers techniques for growing the varieties — and how well they fare even in poor soil.

"The first adopters of new varieties and crops will be the wealthier farmers who can afford to take risks," Russell says. "Less wealthy farmers will watch and wait. If the experiment works out well, they will follow."

The education process is important. Salinity can vary in adjacent fields or even within fields due to elevation, rainfall and exposure to salt water from nearby rivers. Different varieties of salt-resistant rice can grow in varying degrees of salinity.

Although climate change has likely contributed to the rise in salty soil in Bangladesh, shrimp farming is also to blame. Shrimp farmers use salty river-fed canals to fill ponds separated by dirt embankments. The business is lucrative and has become popular in Bangladesh over the past decades.

But it's risky for farmers to rely just on shrimp farming, says Mohammed Harunur Rashid, a scientist with the Bangladesh Rice Research Institute. Disease can wipe out a whole farm. So the salt-resistant rice allows some farmers to alternate between cultivating shrimp and growing rice.

A few miles down the road from Gholgholia, barefoot farmers paused from harvesting golden fields of salt-resistant rice in the village of Patrakhola.

Din Mohammed, a 42-year-old farmer, estimated his rice yield dropped by a third because of increased salinity after Cyclone Aila in 2009. The storm broke near river embankments and flooded the village's precious farmland with salty water. But the new variety yields more rice, he says.

Mohammed has also started planting sunflowers in the same field after he harvests rice. Sunflowers naturally tolerate salty conditions, and the crop is new and experimental in Bangladesh. Through a pilot program, about 800 farmers are growing sunflowers that can be turned into cooking oil.

In a harvested section of a field in Patrakhola, the ground was covered with flattened husks after farmers harvested rice. Before, this land would have lain fallow for months until the next rice planting. But sunflower seedlings now poked up between matted husks and sprouted a few green leaves.

Within months, sunflowers would stand 4 feet tall and create a new landscape of vibrant yellow instead of fallow brown soil.

This story was supported by a grant from the Solutions Journalism Network, an organization dedicated to reporting about responses to social problems.