Accessibility links
Science Fair Winner Designs Device To Cut Virus Spread On Planes : Goats and Soda When 17-year-old Raymond Wang read about how easily some diseases spread on planes, he thought airlines could do better. So he went to work — and won $75,000 at the International Science Fair. 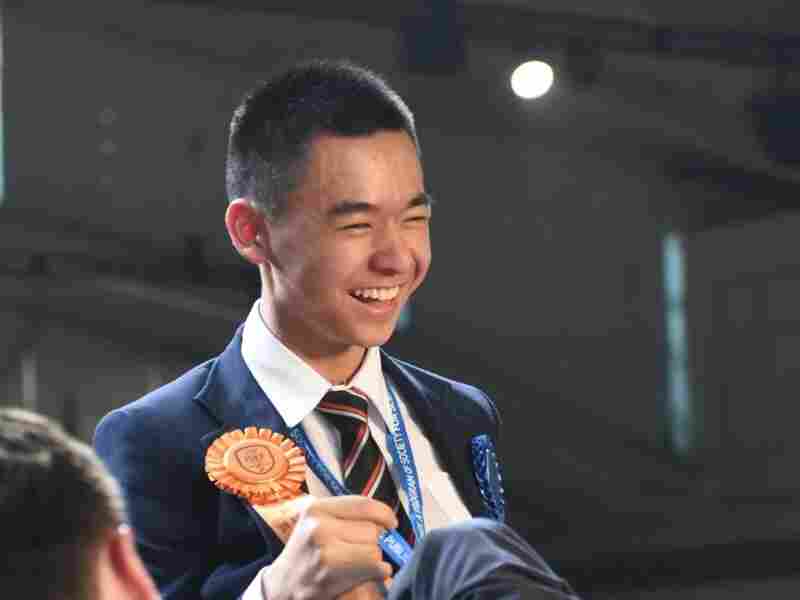 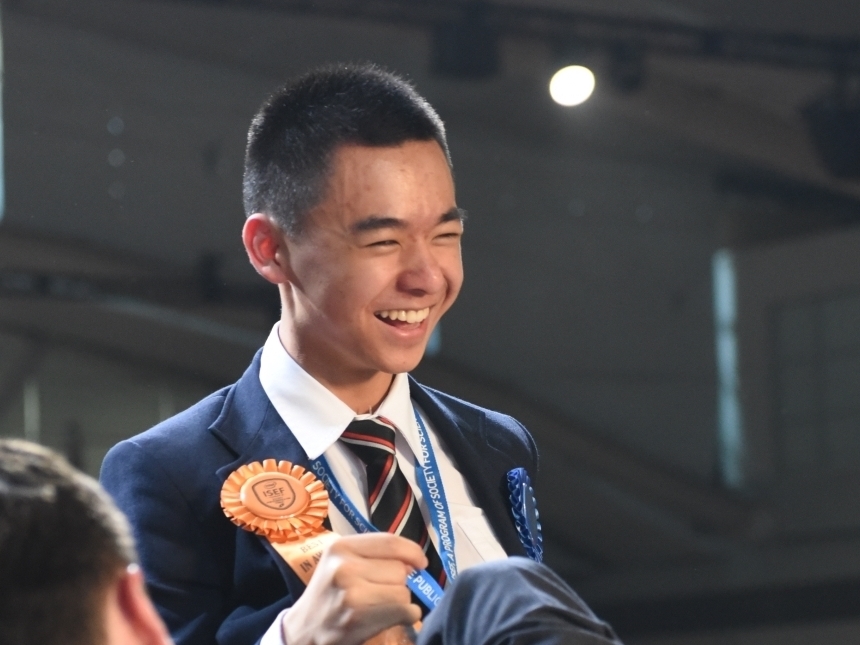 Raymond Wang, 17, of Vancouver, celebrates winning first place at the Intel International Science and Engineering Fair in Pittsburgh, May 15.

When 17-year-old Raymond Wang saw the Ebola outbreak on the news last year, it got him thinking about viruses and how they spread around the world, especially on airplanes.

He dug into the literature, and found some disconcerting studies. For instance, one study estimated that a person sick with H1N1 swine flu has the potential to infect 17 others during a 17 hour flight.

Wang thought commercial airlines could do better. So he went to work.

Using computer simulations, Wang designed a device that can potentially curb disease transmission on planes by optimally directing airflow in a cabin.

What happens when a passenger sneezes on an airplane?

Now take a look at what happens to that sneeze when the cabin's ventilation system includes Raymond Wang's airflow device.

Wang, a junior at St. Georges School in Vancouver, predicts the device can "improve the availability of fresh air in the cabin by 190 percent and reduce the concentration of airborne germs by 55 times."

And oh yeah, the device won the teen $75,000 — and the top prize — at this years Intel International Science and Engineering Fair in Pittsburgh in May.

All jetliners these days have air filters (called HEPA) that remove more than 99.97 of particles in the air, including bacteria and viruses.

That reduces the spread of diseases in a cabin immensely. But what if the air has a hard time reaching the filter? If somebody in your aisle sneezes, could the virus-packed air swirl around and hit you before it gets to the filter?

To figure that out, Wang created 32 simulations to track the movement of pathogens swirling around a Boeing 737 cabin. He also made a model of the cabin to confirm his simulations were correct.

He found that the traditional airflow in a cabin continuously throws around contaminated air without giving it a chance to be absorbed into the HEPA filter. Wang's device fixes this by creating "personalized breathing zones" for each passenger, he says. It's essentially a wall of air stopping infectious particles from traveling in your personal space.

So could this device actually reduce the spread of bacteria and viruses on a plane?

"When you think about what needs to take place for someone to come down with an infectious illness, it blows your mind away — all the things that have to come into place," Gendreau says, "One of the big things is luck: Are you in the wrong place at the wrong time?"

Although Wang is on the right track with his device, Gendreau says, the issue is more complicated than just putting a device in the cabin's air system that will alter the ventilation pattern.

In most cases, how we get an infectious disease while travelling isn't through airborne particles, but by touching surfaces contaminated with large droplets that are expelled from the coughing, sneezing and talking of your sick aisle buddy.

And, Gendreau says, you don't have to wait for airlines to change their cabins if you want to keep from getting sick in the air.

"The big thing is the passengers' behavior when they travel — what things do they do that will put them at a greater risk that will bring infectious diseases to themselves?" he says.

At the top of Gendreau's list: Have good personal hygiene.

The next time you fly, he says, be sure to bring a lot of hand sanitizer and use it often if you want to stay healthy. You can follow more of his advice on how to avoid getting sick on the plane here.