Accessibility links
How Salt + Car Battery = Clean Water : Goats and Soda A clever device uses technology developed by the military to make chlorine quickly and cheaply. The goal is to give schools and hospitals around the world an easy way to purify water. 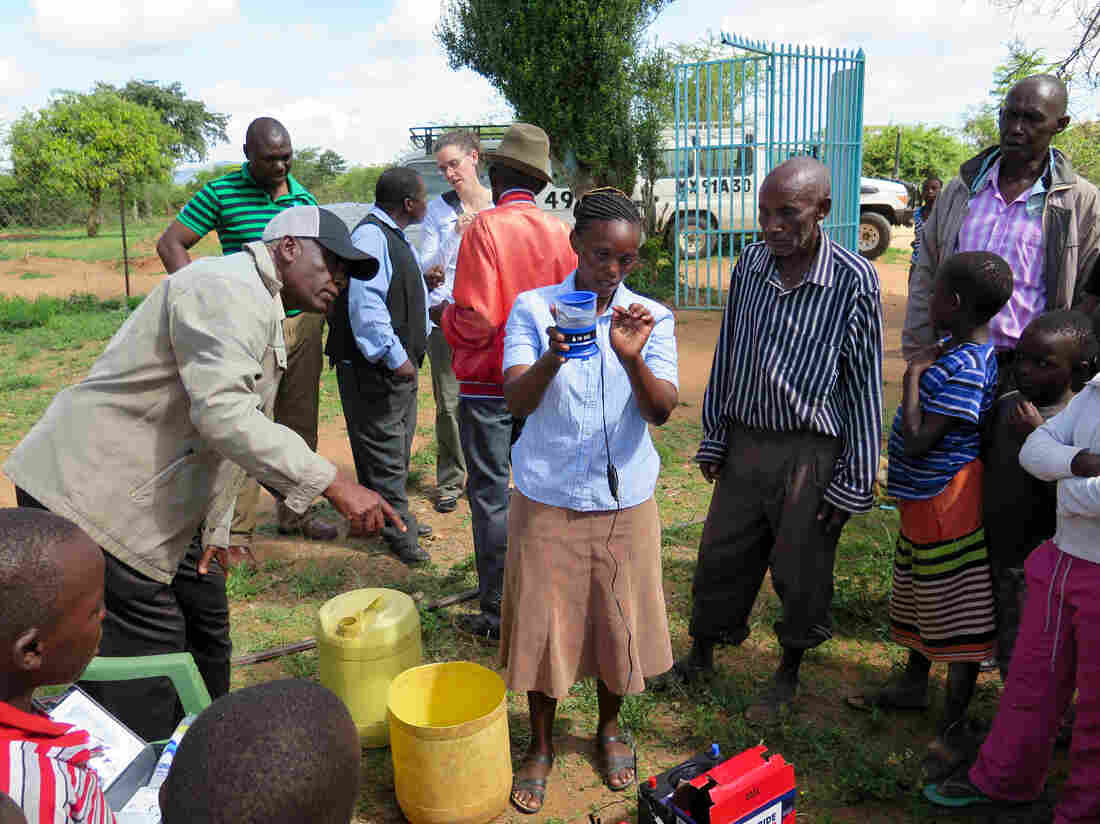 A woman in Yatta, Kenya, explains how to make clean water using a car battery and just the right mixture of salt and water. Jane Mauser/Courtesy of MSR hide caption 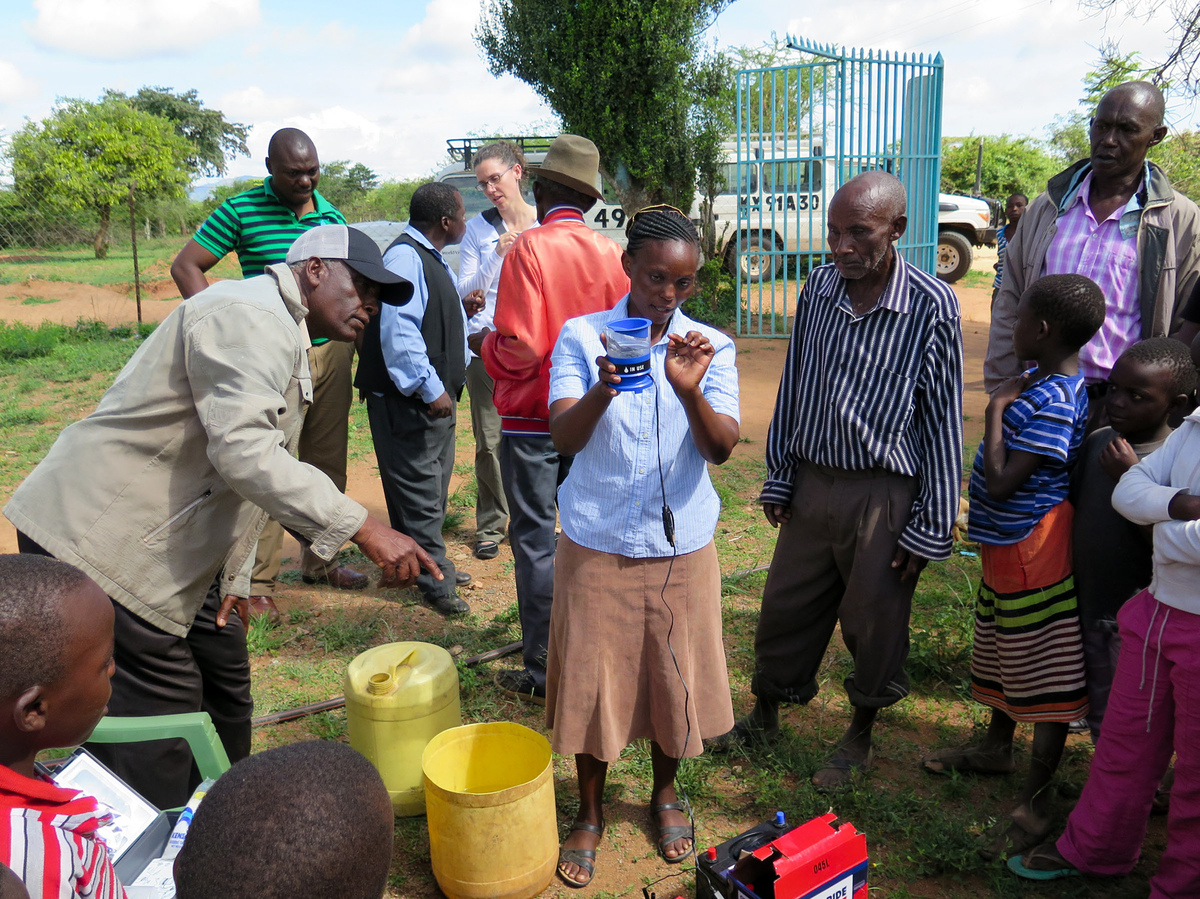 A woman in Yatta, Kenya, explains how to make clean water using a car battery and just the right mixture of salt and water.

It's easy to take clean, safe water for granted. It just flows out of taps continuously — even in drought-ridden California.

But for hundreds of millions of people around the world, clean water is a luxury. In many places, even patients in hospitals and kids at school don't have water that's safe to drink.

Now, an unlikely partnership of an outdoor equipment manufacturer and a global health NGO is trying to change that.

They've engineered a clever device that can make chlorine from just water, salt and a car battery. It's called the SE200 Community Chlorine Maker, and it uses technology developed by the military for water purification in remote areas.

To Clean Drinking Water, All You Need Is A Stick

Chlorine is commonly used to disinfect water because it kills many bacteria and viruses. The problem is, though, chlorine isn't always easy to obtain. And it's hard to know how much to use.

Last week, I got a chance to see the SE200 in action, at a world development conference in the District of Columbia.

The device is a small plastic canister that attaches to a battery with what look like miniature jumper cables. Using a special "brine bottle," you add salt and water in amounts indicated by lines. Mix it up, and add the salt solution to the SE200. With the push of a button, the canister illuminates, and the solution begins to bubble.

What looks like boiling water is actually a chemical reaction, called electrolysis, says Jesse Schubert, of the NGO PATH. In water, the salt (i.e., sodium chloride) breaks apart into sodium and chlorine ions. The electricity from the battery separates the negatively charged ions from the positively charged ions. The reaction releases gas, and creates bleach, or sodium hypochlorite.

"There are other chlorine generators out there," Schubert says. But they can be expensive and difficult to use. "The innovation [of the SE200] is that the unique circuitry does calculations and always makes the right chlorine concentration," he says. One teaspoon of chlorine solution from the SE200 can treat 5 gallons of water.

Back in the early 2000s, the company Mountain Safety Research, with support from the Defense Advanced Research Projects Agency, spent $6 million developing a pen-size water purification system. Then PATH teamed up with MSR to turn the military technology into a product that could be used by communities in developing countries.

Over the past seven years, MSR and PATH have field-tested the SE200 in more than 10 countries, including Kenya, Ghana, India and Haiti. MSR released the device commercially in May.

The SE200 can provide clean water for schools, health centers and water vendors. Each device costs about $200. But it can treat enough water for 200 people for about five years, MSR says.

There are other devices available for disinfecting water in a single household and options for getting clean water to entire cities. But few devices are available for places in between the two sizes. That's the gap the SE200 is supposed to fill, says MSR's Laura McLaughlin.

At first, NGOs will distribute the water purifiers. But the two companies want to eventually sell them directly to users.

And that's where the biggest challenge will be, says Mark Sobsey, an environmental scientist at the University of North Carolina. People using the chlorine-maker will have "varying levels of skills, experience and understanding of water treatment and dosing chlorine," he wrote in an email. That means they can make mistakes.

To try to address this concern, McLaughlin and Schubert say, each kit comes with test strips to ensure that the concentration of chlorine is right every time. Smiley faces indicate the ideal range. And the instructions for the SE200 are pictorial.

But the device can't disinfect all types of contaminated water. If the water is turbid, pre-treatment with another process, such as filtration, should happen before adding chlorine — otherwise, the water might not be safe for drinking.

And there's always the issue of maintenance and repairs, Sobsey says. What happens if the device breaks? Who will fix it?

Despite these questions, Dr. Kellogg Schwab thinks the SE200 is a great idea. He's the director of the Johns Hopkins Global Water Program and has been working with MSR to evaluate the SE200. He likes that the team has been giving thought to the whole supply chain. Instead of just giving out a device, he says, they're training operators and encouraging entrepreneurship.

But "when it comes to water, there are no silver bullets," says MSR's McLaughlin. "Many solutions are needed."

In a previous version of this story, we incorrectly said that the SE200 had been field-tested last month. The testing was actually in May. We also incorrectly said the Defense Advanced Research Projects Agency spent $6 million developing a pen-size water purification system. It was actually Mountain Safety Research that spent that money to develop the purification system, with support from DARPA.