Accessibility links
Peruvians Love Their Chicha Street Art. City Officials ... Not So Much : Goats and Soda Walk down a street in Peru and you'll likely see an example of the glow-in-the-dark posters and murals. Lots of people love them. But the upper crust isn't always impressed.

Peruvians Love Their Chicha Street Art. City Officials ... Not So Much

Peruvians Love Their Chicha Street Art. City Officials ... Not So Much 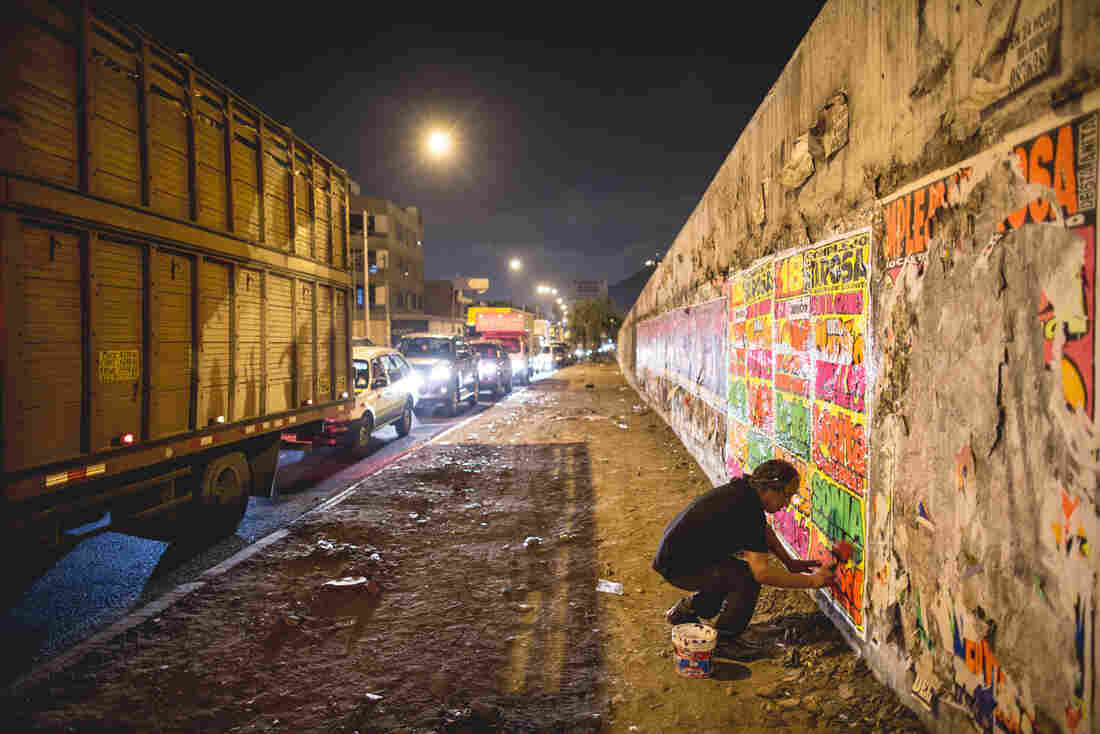 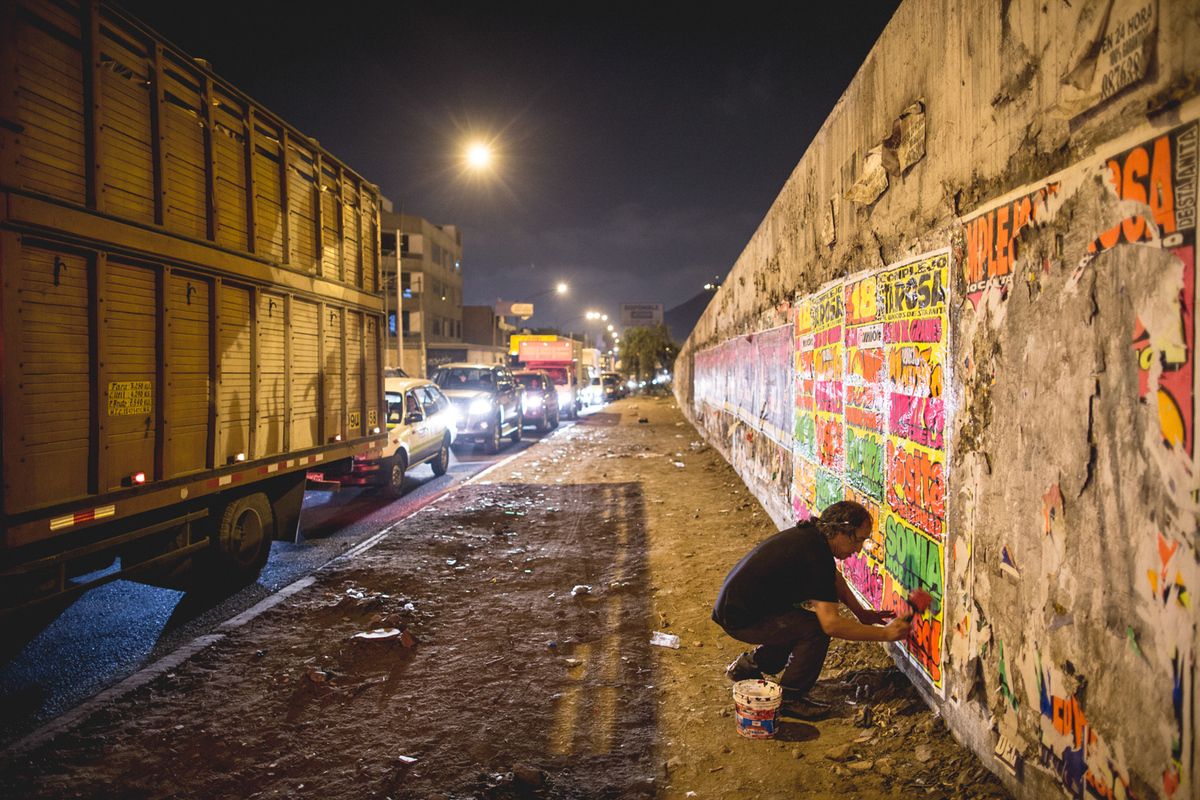 Elliot Tupac is bringing the street art of Peru to Washington, D.C.

A brush in one hand, a can of spray paint in the other, a tanned Tupac is emblazoning the word "Libertad" — Spanish for freedom — in big bold letters. Their neon colors are so intense they could practically glow in the dark.

The art he's creating is called chicha. It's definitely fun to look at it. And it turns out to be a bit controversial as well. In March, the municipal government of Lima painted over a Tupac mural with the words "Antes sonaba" (I used to dream) and many other street murals in a historic district. The reasons are unclear; the city government reportedly says it was trying to preserve the historic district.

As for Tupac, he just keeps on making chicha-style murals. That's why the Smithsonian Folklife Festival brought him to town for its celebration of Peruvian culture.

If you've not been to Peru (or the festival), you may be wondering: What exactly is chicha?

The word itself has a murky origin. In Latin America, most people use it to refer to a popular fermented corn drink. Some say it's derived from the word for maize (chichab in Kuna, a Colombian language) or fermented water (chichiatl in Nahutl, an Aztec language).

But in Peru, chicha is more than just a drink. It's a music genre that uses rock 'n' roll instruments like electric guitars and synthesizers to rock out funky beats and folk melodies.

"Roots of Chicha: Psychedelic Cumbias From Peru" by Chicha Libre

"Chicha started out as a music movement in the '60s," says Cristina Díaz-Carrera, co-curator of the 2015 Smithsonian Folklife Festival. It sprang from Cumbia, a "catchy" dance music that started out in Colombia. Peruvians added local rhythms, instruments, melodies and dance moves and renamed it "chicha." In the '90s, says Diaz-Carrera, the Ministry of Culture in Peru recognized chicha as a valid art form.

Alfredo Villar, a Peruvian art historian and a participant at the festival, called chicha "the contemporary baroque."

"It's overloaded with information. It's an explosion of color and sound," Villar says of the music, "It's like a carnival."

Many of the fans are migrants from the central Andean valley regions of Peru — the Huancayo, who'd flocked to cities like Lima as a result of the land reform in the 1940s.

With the music came the art — first posters advertising concerts, then murals with a message.

The look of chicha is credited to Los Shapis, an '80s band, which wore brightly colored outfits inspired by embroidery from their native Huancayo region. Other groups loved the look. And bands began working with street artists to create posters that captured their essence and style with neon-bright colors and big letters.

But not everyone in Peru approved of the music and the street art it spawned.

"Chicha was actually a disparaging word in the beginning. The lower class listens to this music," Díaz-Carrera says, "the art and everything associated with it, if you're in the upper class you didn't want it on your street."

"The elite don't like chicha art, especially when it's in the streets," Villar says. "They're changing a little bit, but I don't think there's sincere change."

The murals offer these communities a way to express themselves, to communicate with each other, and appreciate art outside of the museum setting, says Alexia Fawcett, community engagement manager for the Folklife Festival. 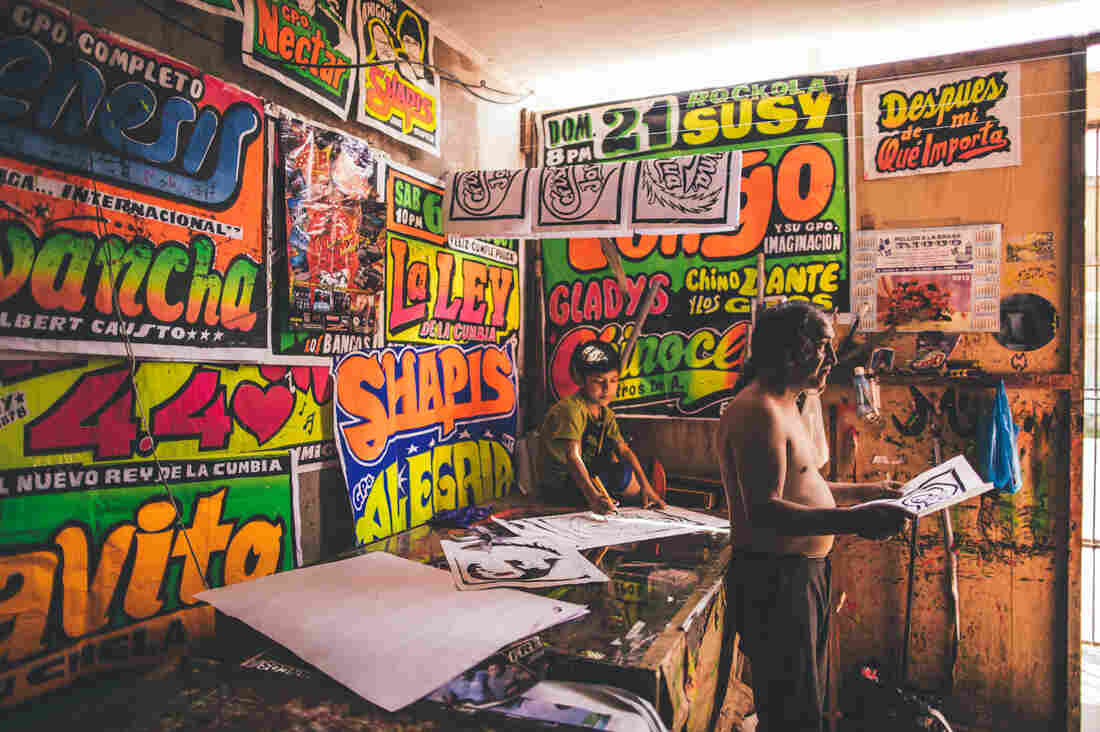 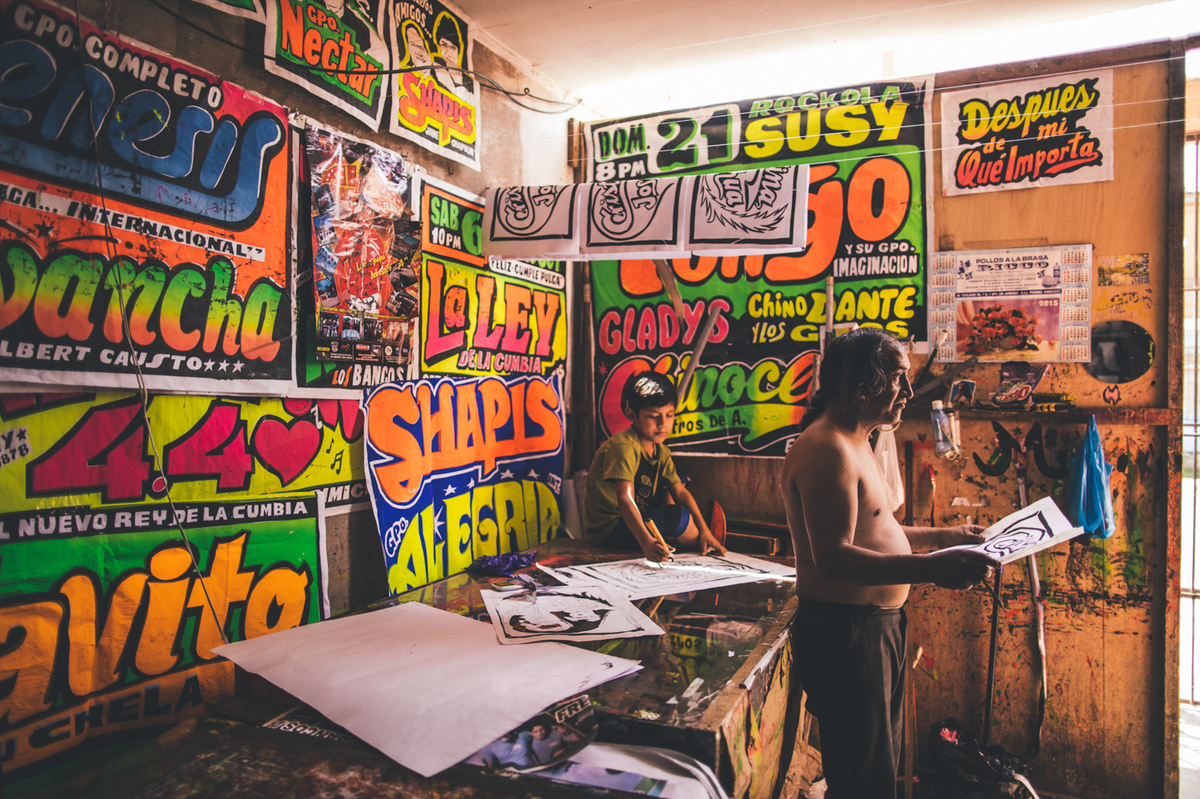 So naturally there was an uproar when the government erased the murals earlier this year. The people of Lima responded on social media with hashtags #SalvemosLosMurales (save the murals) and #BorraronUnoPintaremosMil (they erased one, we'll paint a thousand) as well as staged protests.

Meanwhile, chicha is finding a global audience. "In other countries we have love and support; they let us do the work we do on the walls," says Pedro "Monky" Rojas, a chicha pioneer who was also part of the Folklife contingent.

Tupac has brought his brightly colored artwork to the walls of many countries — Chile, Tunisia and even the United Kingdom a couple of weeks ago. The art is mainly in the streets — "that's where it has to be," Tupac says — but he also offers lettering workshops.

And despite the municipal government's recent action in Lima, chicha continues to flourish in the streets where it was born.

"You can go to Lima, go to the northern coast, the southern coast," says Diaz-Carrera. "Chicha is everywhere."

An earlier version of this story stated that "the government" had erased chicha murals in Lima. In fact, it was the municipal government of Lima, not the national government.