Accessibility links
This Must Be A First: Alpacas Blessed In Nation's Capital : Goats and Soda Peru brought its tradition of praying for alpacas to the U.S. And there's good reason to wish the animals well. Their fiber — softer and warmer than wool — provides a livelihood for many Peruvians.

This Must Be A First: Alpacas Blessed In Nation's Capital

This Must Be A First: Alpacas Blessed In Nation's Capital 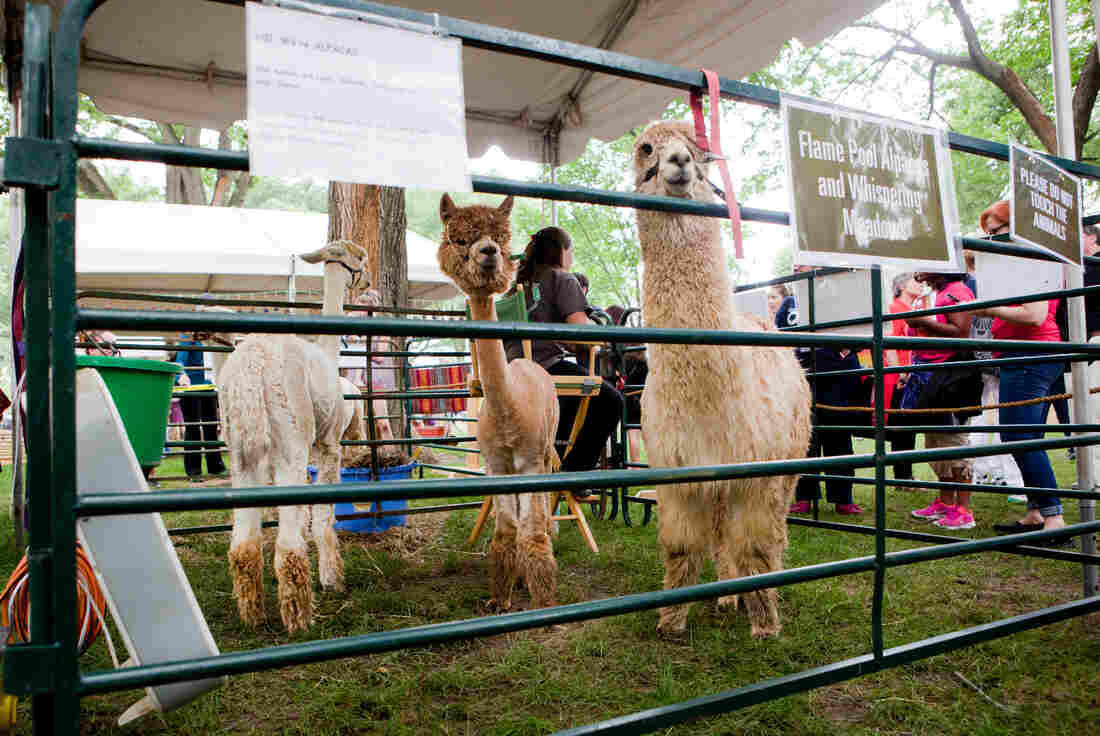 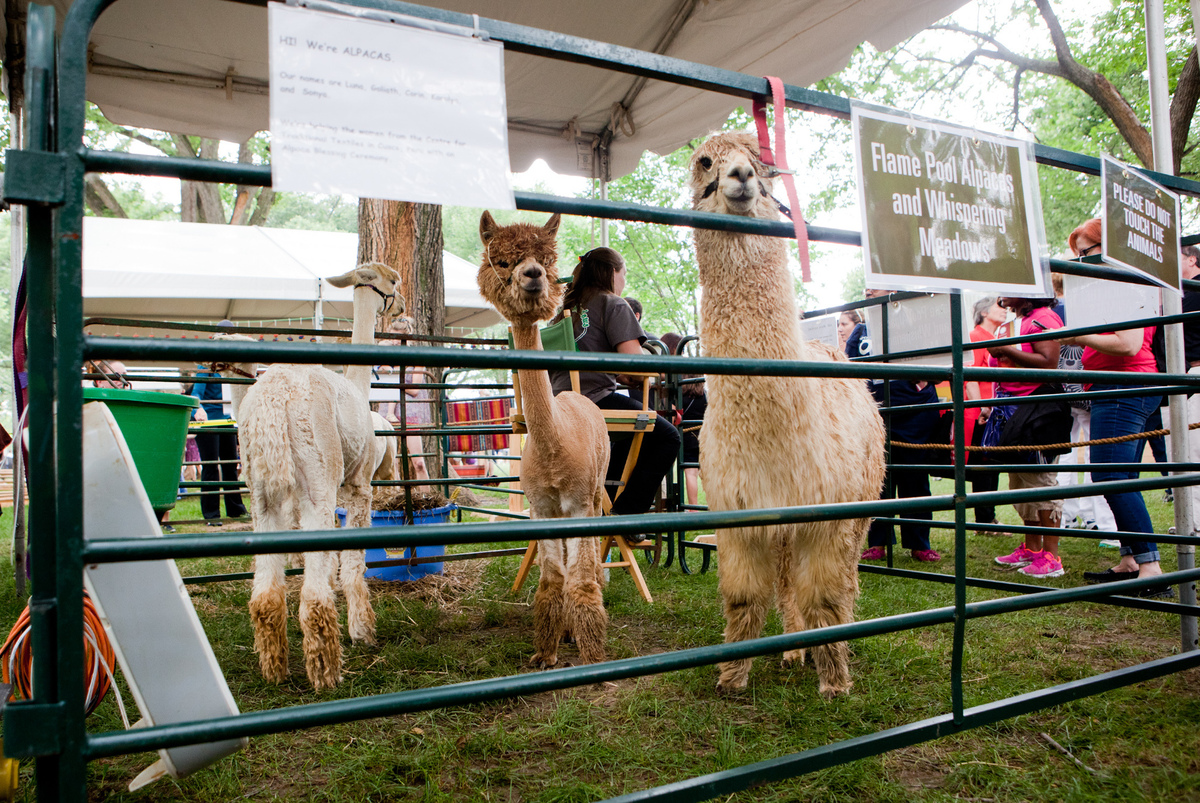 The Peruvians blessed this delegation, from Whispering Meadows Alpaca Breeders and Flame Pool Alpacas, during the first week of the Smithsonian Folklife Festival.

Here's something you don't see every day in Washington, D.C.

Standing just a couple of blocks from the U.S. Capitol, a group of Peruvian highlanders, draped in handwoven cloths and ponchos in all the colors of the rainbow, pray to Mother Earth, to the mountains, to the spirit of their ancestors. They offer wine, incense and flowers. Their wish is that their alpaca "cover the earth like the grains of sand by the ocean."

Alpacas, in case you don't know, are llama-like animals in the camel family. Their wool — called fiber — is prized for its softness and warmth. It's woven into textiles and garments. So the more alpacas, the better. That's why Peruvians hold a traditional blessing ceremony, performed since before Columbus discovered the New World and re-created at the national mall last Friday for the annual Smithsonian Folklife Festival.

The Peruvians kneel in front of the alpacas' pen to prepare their offering. Behind them, six alpacas, on loan from Sugarloaf Alpacas in Maryland, stand nervously. It's apparent they've never been blessed before. 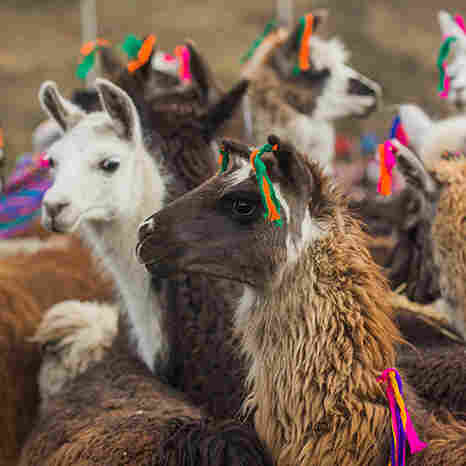 A woven tassel signifies that an alpaca has received its blessing. Courtesy of PROMPERU hide caption 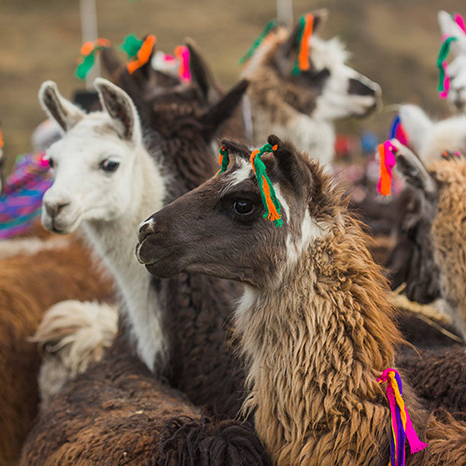 A woven tassel signifies that an alpaca has received its blessing.

A weaver named Timoteo, from the village of Chinchero, leads the ceremony. As he speaks, a translator echoes his words.

"Lightning storms, please, I supplicate you with this offering. Please be gentle with us, support us and allow our animals to be fruitful and multiply, don't be harsh."

Before the ceremony began, I spoke with Nilda Callañaupa Alvarez, a traditional weaver. Callañaupa is a cofounder of the Centro de Textiles Tradicionales del Cusco, a nonprofit formed to preserve the art of weaving. As we talk, her hands never stop moving as she spins alpaca fiber into yarn.

The alpaca ceremony, Callañaupa explains, takes place once a year during their rainy season, which in Peru lasts from November through April. The people ask Mother Earth — Pachamama in the Quechua language — and the spirits to look out for their animals.

"Spirit of our ancestors, angels that protect us, please take care of us. We offer to you this blessing."

Alpacas are native to South America, where they are sometimes raised for meat (which is low in calories, fat, and cholesterol) but are primarily prized for their fleece, which grows naturally in over twenty colors. Alpaca fiber is not only soft, Callañaupa says, but warmer and finer than sheep's wool.

Ann Rowe, a researcher at the George Washington University Museum and Textile Museum in D.C., says these attractive properties of alpaca fiber are due to its structure. "Alpaca is softer than wool because [the shaft of each fiber] has fewer surface scales," she says. "It is warmer because many of the fibers have a hollow core."

It also costs more than wool, Callañaupa says, an advantage for the farmer. Peru is reportedly home to 3.6 million alpacas — that's most of the world's population and produces 80 percent of the world's alpaca fleece. Those exports, however, are managed by large fiber mills. 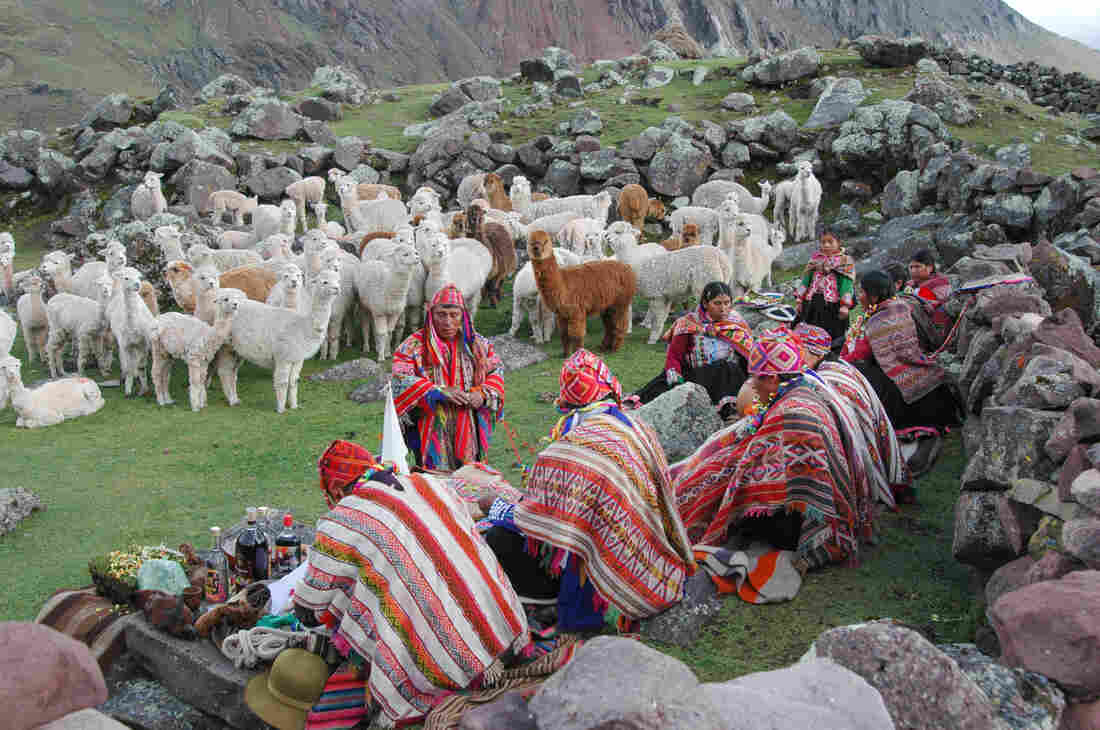 Peru's alpacas are blessed once a year, during rainy season. The blessing declares: "Let there be a great abundance of alpacas, so that the alpacas should be like the condor and appear to fly from one mountain to another." Courtesy of the Center for Traditional Textiles of Cusco hide caption

toggle caption
Courtesy of the Center for Traditional Textiles of Cusco 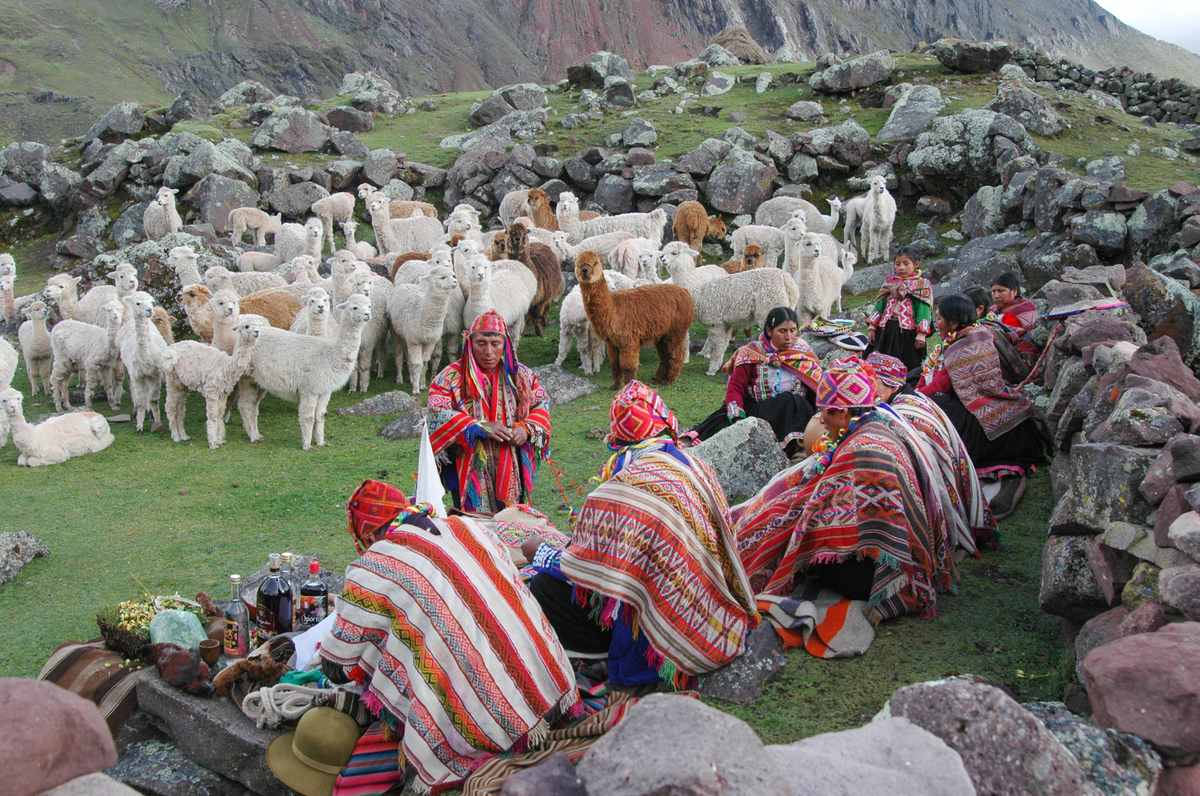 Peru's alpacas are blessed once a year, during rainy season. The blessing declares: "Let there be a great abundance of alpacas, so that the alpacas should be like the condor and appear to fly from one mountain to another."

Courtesy of the Center for Traditional Textiles of Cusco

"The export industry is an entirely different thing than local use of alpacas" for textiles, says Rowe.

"Let the alpaca be as strong as can be because their bones are like steel. The mountains should run with alpacas like grains of sand, and their caretakers should be so overjoyed that their eyes run with tears."

It's a long road from animal to textile. It starts, Callañaupa says, with shearing the animals, which is done every year or two (in warmer climates, annual shearing is more common).

Next, the fiber is spun by hand into yarn on a traditional drop spindle — a wooden spike that is weighted at one end. The spinner fixes the fiber to the spike, then pulls and twists the fiber while holding the spindle between the legs. When the twisted fiber reaches a certain length, the spindle is dropped toward the floor, and its weight makes it rotate, twisting it into yarn.

The finished yarn is washed and can be dyed. The Cusco weavers use natural dyes made from leaves, flowers and insects.

When the yarn is ready, artisans use a backstrap loom to weave bright, intricate textiles. Each community, Callañaupa explains, has its own designs and style of weaving. "It's part of our identity," she says.

"Let there be a great abundance of alpacas, so that the alpacas should be like the condor and appear to fly from one mountain to another, and let them come in all the beautiful colors."

People sell their woven textiles. If they have a lot of alpaca, they'll sell the actual fiber as well. Callañaupa says that in many of these villages, raising alpaca is the basis for the economy. "In high altitudes where the alpacas are kept, there is not agriculture," she says. "So all the food will come through [sale of the] fiber."

Is it enough to make a living?

She doesn't look up from the creamy, pale fiber she is spinning into soft yarn. "Most people, that pays for living," she says. "The food, the education. No savings."

When the ceremony is over, necklaces of carnations and woven tassels are hung around each alpaca's neck to show it has been blessed. In Peru, the end of the ceremony marks the beginning of a festival, so right there on the National Mall, to the beat of drums and the whistle of flutes, the Peruvians dance their thanks to Mother Earth.

Back in their pen, the blessed alpacas pace, perhaps not yet aware of their good fortune.