Accessibility links
Cholera Vaccine Protects Whole Community, Even Unvaccinated : Goats and Soda A cheap, oral vaccine — about the size of an "energy shot" — offers fresh hope for preventing cholera epidemics, like the one that has killed nearly 10,000 people in Haiti. 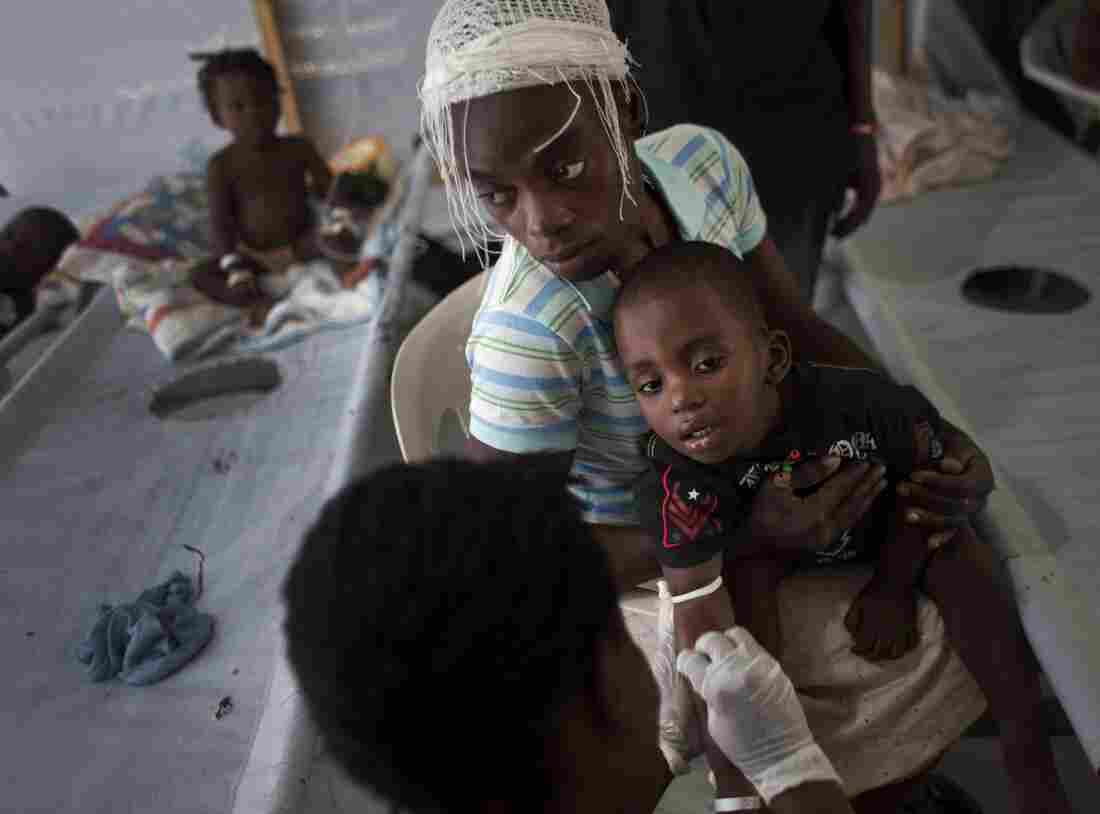 A family receives treatment for cholera at a clinic run by Doctors Without Borders in Port-au-Prince, Haiti, in October 2011, a year after the overwhelming outbreak began. Ramon Espinosa/AP hide caption 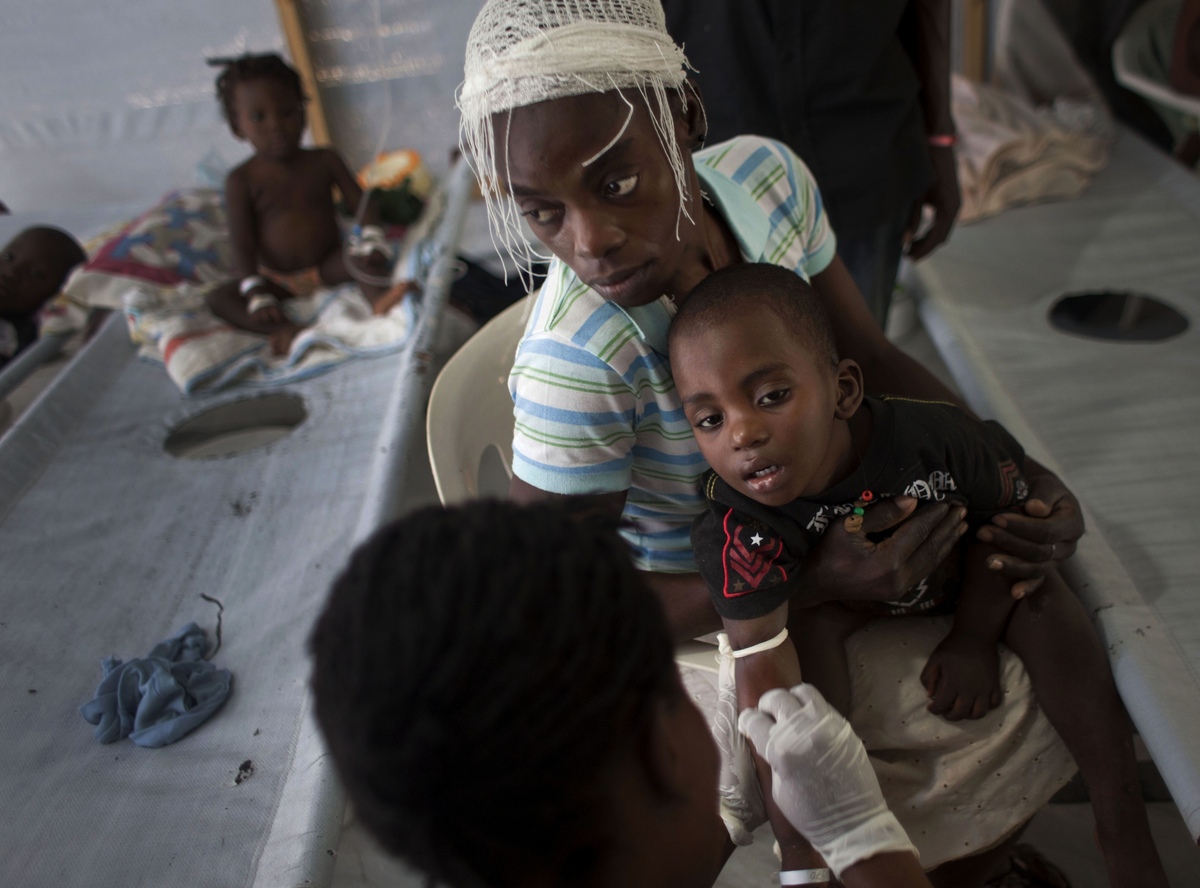 A family receives treatment for cholera at a clinic run by Doctors Without Borders in Port-au-Prince, Haiti, in October 2011, a year after the overwhelming outbreak began.

It's about the size of an "energy shot." You take it just like a shot of whiskey — bottoms up.

But this little ounce-and-a-half of liquid is more potent than caffeine or alcohol.

It's a cheap, oral vaccine against cholera. It could prevent deadly outbreaks, like the current one in Haiti that has killed nearly 10,000 people. 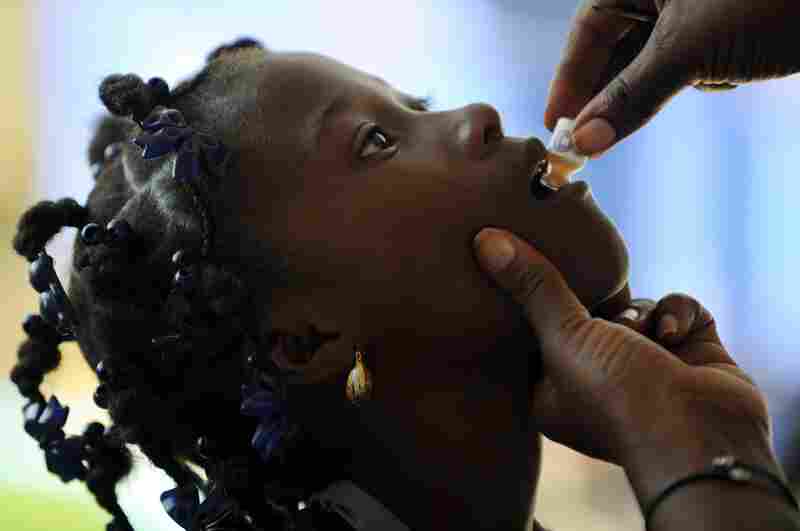 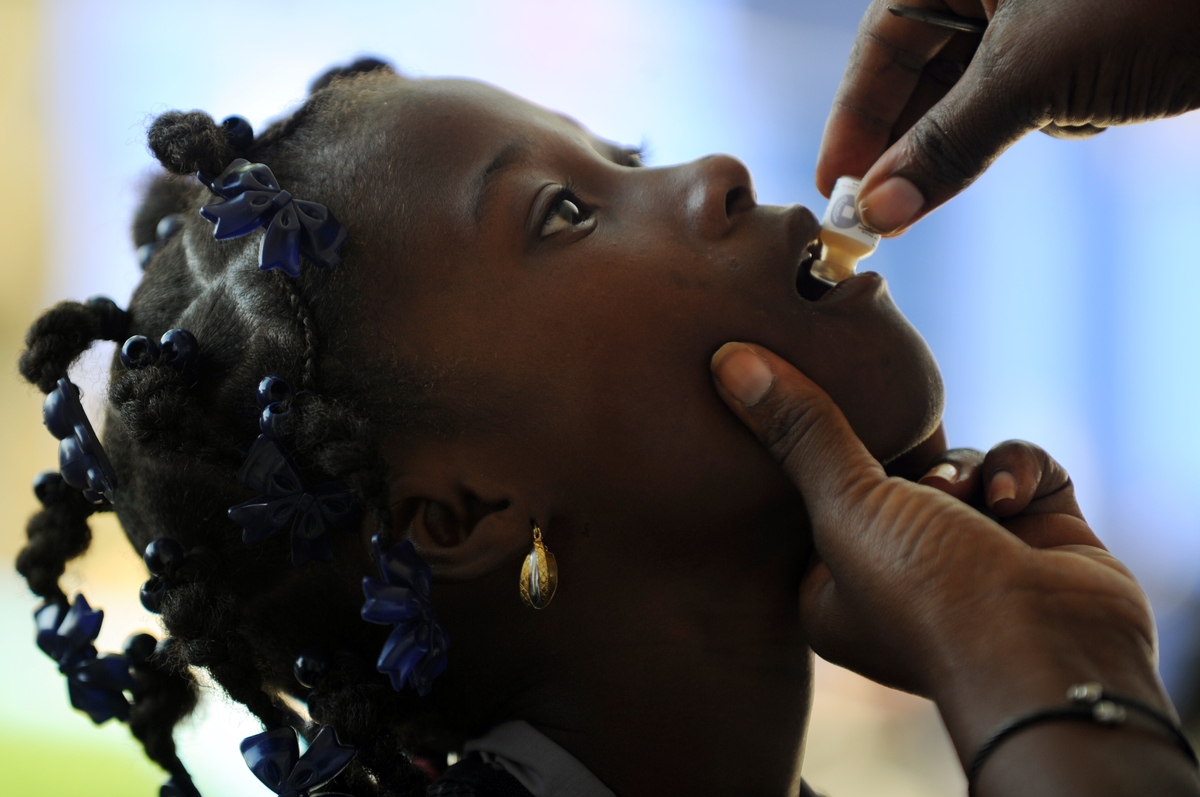 A child receives the second dose of the cholera vaccine in Saut d'Eau, Haiti, last September.

A large study, published Wednesday in The Lancet, found the oral vaccine reduced life-threatening infections in an urban slum by almost 40 percent, even when only about two-thirds of the population were immunized.

The study, which included nearly 270,000 people, is the first to show the vaccine works in a poor area where the water-borne pathogen is rampant.

It also uncovered two interesting insights about the vaccine.

First, the oral vaccine protected the whole community from cholera, even people who didn't get immunized. When a person took two doses, it cut their chance of getting cholera by half. But vaccinating about two-thirds of the people in the slum reduced the overall rate of cholera — across the community — by 40 percent.

This is called herd immunity. And for the cholera vaccine, it seems especially important. "This indirect protection ... could make the difference between population-based cholera vaccination being a viable, effective, and cost-effective public health intervention, or not," Dr. Kim Mulholland and his colleague at the London School of Hygiene & Tropical wrote in a commentary about the new study.

Second, the oral vaccine worked way better than the tried-and-true tool against cholera: getting people to wash their hands and drink clean water. In the study, researchers gave some families a hand-washing station and taught them to sterilize drinking water. But this added prevention didn't significantly cut their risk of getting cholera compared to the vaccine alone.

The oral vaccine, called Shanchol, has been around for a while now. The World Health Organization approved Shanchol in 2011 and started stockpiling it in 2012, so it could quickly stop outbreaks like the one in Haiti. Shanchol is the cheapest of the approved cholera vaccines. It costs $3.70 for the two doses.

But there has been reluctance by health leaders to use a cholera vaccine during outbreaks and as a prevention tool. Some experts are concerned that focusing on immunization might distract from treating cholera patients, a spokesperson from Doctors Without Borders told NPR last year. Others think the vaccine might be less cost effective than generally improving sanitation and drinking water.

WHO Calls For Emergency Stockpile Of Cholera Vaccine

But several studies in the past few years — one in Haiti and one in Guinea — have shown the vaccine saves lives during outbreaks. And the big question now: Is it worth vaccinating large populations before an outbreak starts?

That answer may depend on how long the vaccine works, Mulholland and his colleague wrote. In the current study, two doses of Shanchol protected people for up to five years. Beyond that, its effectiveness is unknown.