Accessibility links
How One Woman Found The Courage To Say No To Domestic Abuse : Goats and Soda An Indian woman suffered through domestic violence for 20 years. Then she changed her life by going to school, but it wasn't to learn. It was to cook. 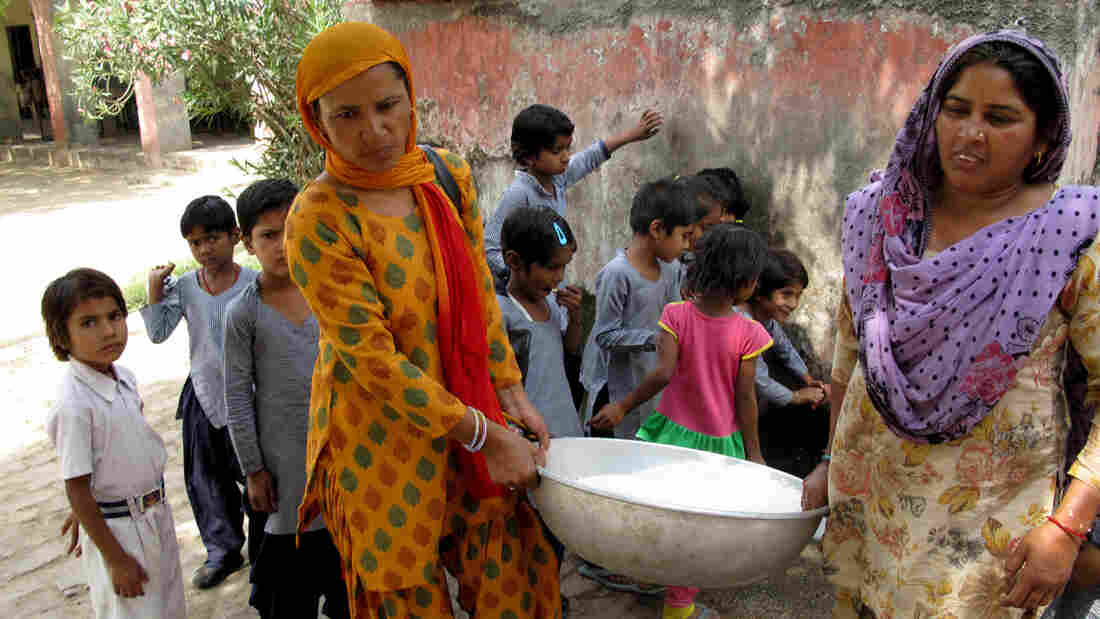 Saroj (left) helps her colleague carry a cauldron of rice to the school kitchen after washing it. Rhitu Chatterjee for NPR hide caption 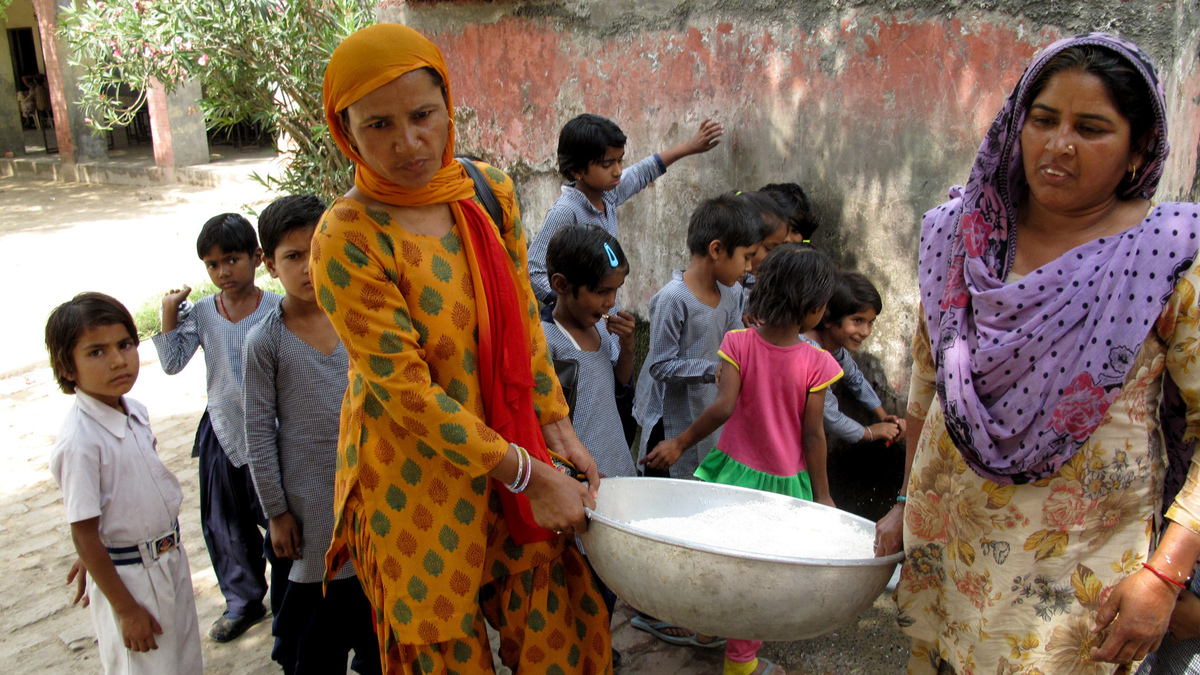 Saroj (left) helps her colleague carry a cauldron of rice to the school kitchen after washing it.

Saroj is a cook at a public school in her village, Dujana, in the northern Indian state of Haryana. Like most people in this state, she doesn't have a last name.

She walks to work down narrow streets of concrete homes with cows and buffaloes outside. She is short, only about 5 feet 2, but she walks tall and confident in her traditional mustard-colored tunic and pants. Her tanned face is framed by big, dark eyes and a square jaw.

As Saroj passes an old man sitting outside a house, she leans in close to me and starts whispering.

"That man sitting on that chair, he's my husband's elder brother," she says. "He quarreled a lot with me."

"What did he quarrel about?" I whisper back. The man, with his back to us, is still within earshot.

"Well, he wanted to control me," she says. "So that I wouldn't come and go from the house as I pleased. He wanted me to ask for his permission, that's why."

She looks indignant, her voice growing louder the farther we get from him.

Today, Saroj lives her life on her own terms. But like the vast majority of women in rural India, she spent most of her life confined to her home, obeying the men in her family.

It took her more than two decades to break free from the traditional rules of this region. What helped turn her life around was getting a job at the local school. 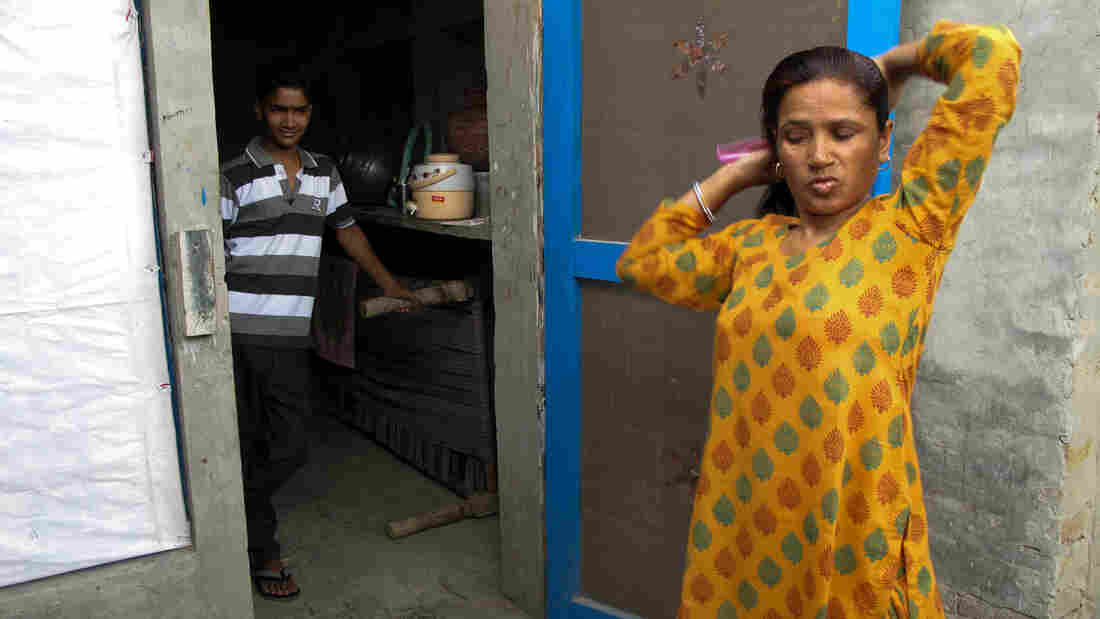 Saroj's teenage son watches her comb her hair before she heads to work. Rhitu Chatterjee for NPR hide caption 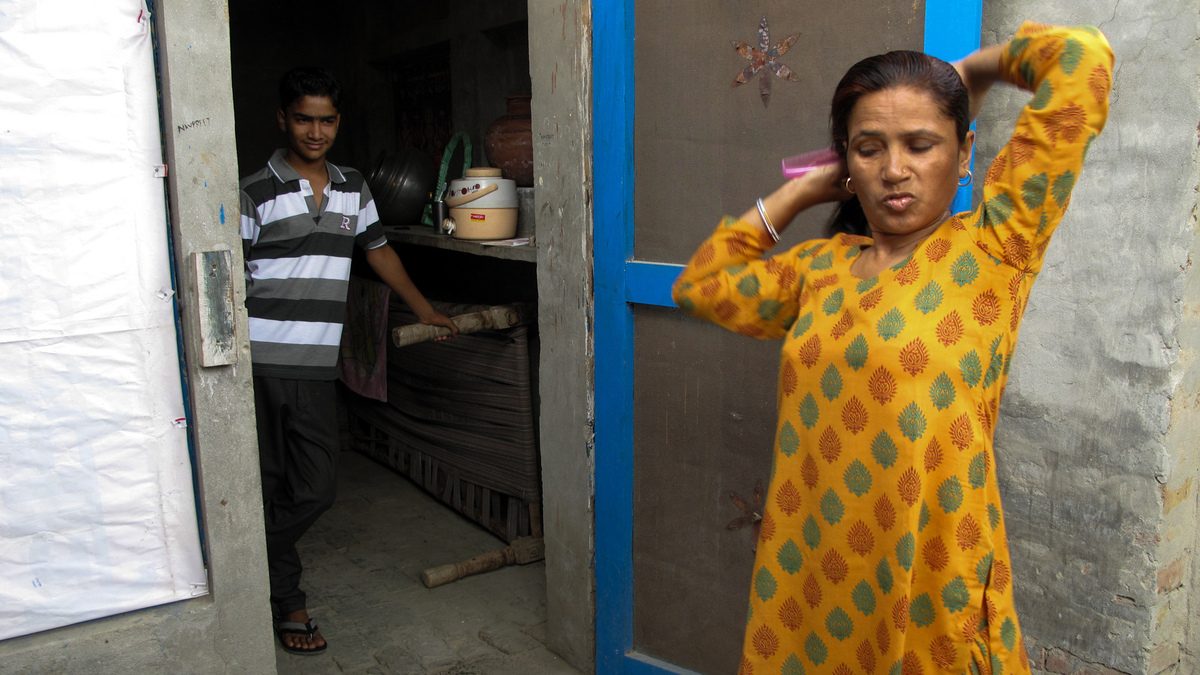 Saroj's teenage son watches her comb her hair before she heads to work.

Married At 16, Scarred For Life

Saroj grew up in India's capital city, New Delhi. Her parents married her off at 16.

"I came here after I got married," she says.

This is her husband's village. The marriage gave her two daughters and two thick scars, 6 inches long, on the inside of her left arm. The scars are from a time when Saroj's husband hit her with a wooden stick. She says her husband loved her but would beat her whenever he got drunk.

Saroj tried to get help by telling relatives and neighbors.

"If I told someone, they'd say, 'After all, it's your husband beating you, not some random man.' "

This is a particularly patriarchal part of India. Domestic violence is common here.

But one day, after about a decade of marriage, Saroj's husband just disappeared. She searched for him for months but found no clue to his whereabouts. She didn't even know whether he was alive or dead.

Back in her village, she was treated like a widow. Widows in Haryana are often married off to one of their husband's younger brothers to keep property and children in the family. So Saroj moved in with her younger brother-in-law Dharamveer.

"I thought, well, he'll raise my children; he'll look after me," she says.

What happened was the opposite. He drank a lot and was more violent than his brother. She stayed with him, though, and bore a son. But she felt miserable and helpless.

When her son was still a toddler, she met the first person who was sympathetic to her — a teacher at a local school.

"She'd come to get her daughters admitted at the school," recalls Santra Devi. "We started talking, and I came to know that poor thing, she was very sad."

Santra says Saroj told her about her husband's drinking and that she had no money for food.

"So I said why don't you come to the school and help us out with a few things?"

Santra meant odd jobs like cleaning, making tea, running errands. It was Saroj's first time working outside her home. "She didn't know anything about anything back then," Santra says. But, she says Saroj was hard-working and learned quickly.

A few years later she got her big break. In 2004, the school signed on to the government's Mid Day Meal Scheme, a program that provides free school lunch at public schools. The program requires schools to hire cooks, preferably poor and underprivileged women like Saroj.

The school hired her full time to cook lunch for the students. The pay wasn't much — less than $20 a month. But the job became a lifeline for her. For her husband, though, it was a threat, because he couldn't control her anymore.

"Her husband was awful," recalls Santra. "He would stop her on the road, beat her up. He even came into the school. If she had any money, he'd take it away from her."

He kept trying to persuade Saroj to give up her job. When she refused, he beat her more.

Santra and other teachers decided to intervene. They spoke directly to Dharamveer and threatened to report him to the police.

"We told him that if you come here again, you'll end up in jail," says Santra. "We made sure he didn't beat her on the streets either. We put pressure on him."

Their strategy worked. He stopped attacking her in public. But inside their home, Saroj says the violence continued.

"I'd feel angry, because he just wouldn't change," she says.

Then one night he did something he'd never done before.

"He broke my teeth," says Saroj. "He hit me with a pipe. You know the ones we use to blow air into the wood stove? It's here somewhere. I'll show you."

She walks out to her kitchen, returns with a narrow pipe about a foot long and places it in my hands.

"This is an iron rod!" I said. The pipe is heavy and cold in my hands. "He hit you with this, on the face?"

This time, Saroj did something she'd never done before.

"I went straight to the police," she says.

Still bleeding, Saroj walked to the police station and filed a charge. The police called her husband to the station, beat him up and locked him up overnight.

The next morning, when he was released, she says he left the village. She hasn't seen him since. That was six years ago. 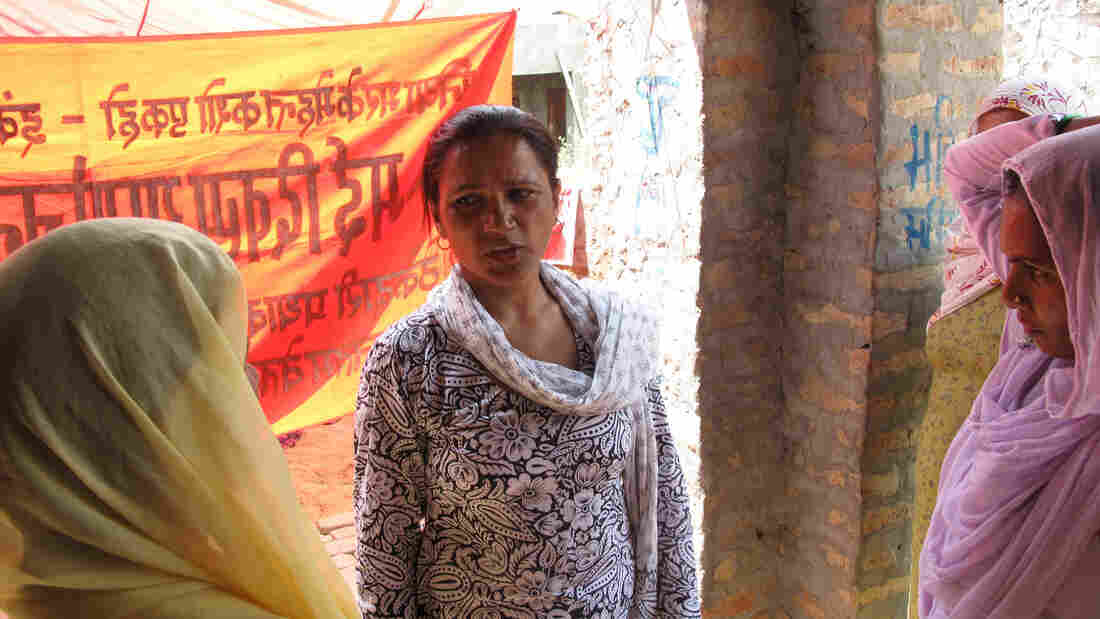 Saroj listens to the complaints and concerns of other cooks and kitchen help during a union meeting. Rhitu Chatterjee for NPR hide caption 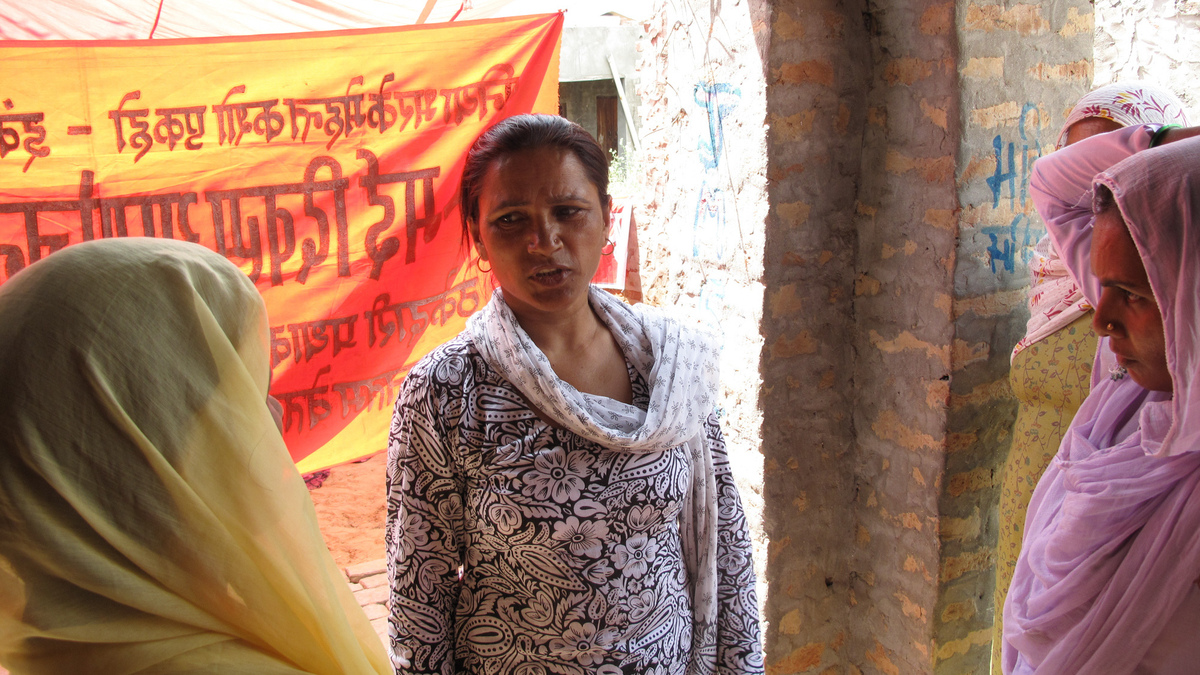 Saroj listens to the complaints and concerns of other cooks and kitchen help during a union meeting.

Leader Of The School Cooks

Today Saroj is the state leader of the union for thousands of women who work as school cooks and kitchen help across the state of Haryana. She has helped her fellow union members lobby for better pay and other rights.

They meet periodically in a two-room, concrete building in the nearby town of Jhajjhar. On this day, scores of women have gathered to discuss persisting problems in their jobs. Some women haven't been paid for several months. Others are worried about layoffs.

Saroj is multitasking: answering phone calls from women on their way to the meeting while listening to others in front of her and promising to take their concerns to lawmakers.

Then a new union member shows up, a skinny woman in a yellow tunic. She needs to pay her dues and sign her name in the receipt book. "I don't know how to sign my name," she says. She's illiterate and looks ashamed.

"You'll learn!" says Saroj, reassuring her. "We'll teach you. No one is born knowing everything."

Then she turns to the group, grinning, and says: "We'll even make her the chief of the Matanheil block, right?" Matanheil is the name of the rural region the woman belongs to.

As the women burst out laughing, Saroj continues.

More than 2 million of India's poorest women work in public school kitchens across the country. It is a modest investment by the Indian government, but it means big changes in the lives of these women, and Saroj hopes, a way for them to live fearlessly.

This story was produced with help from the Pulitzer Center on Crisis Reporting.