Accessibility links
What Do A Chlorinator And A Condom Tied To A Catheter Have In Common? : Goats and Soda They're both featured on a list of 30 innovations that could save millions of lives over the next 15 years. 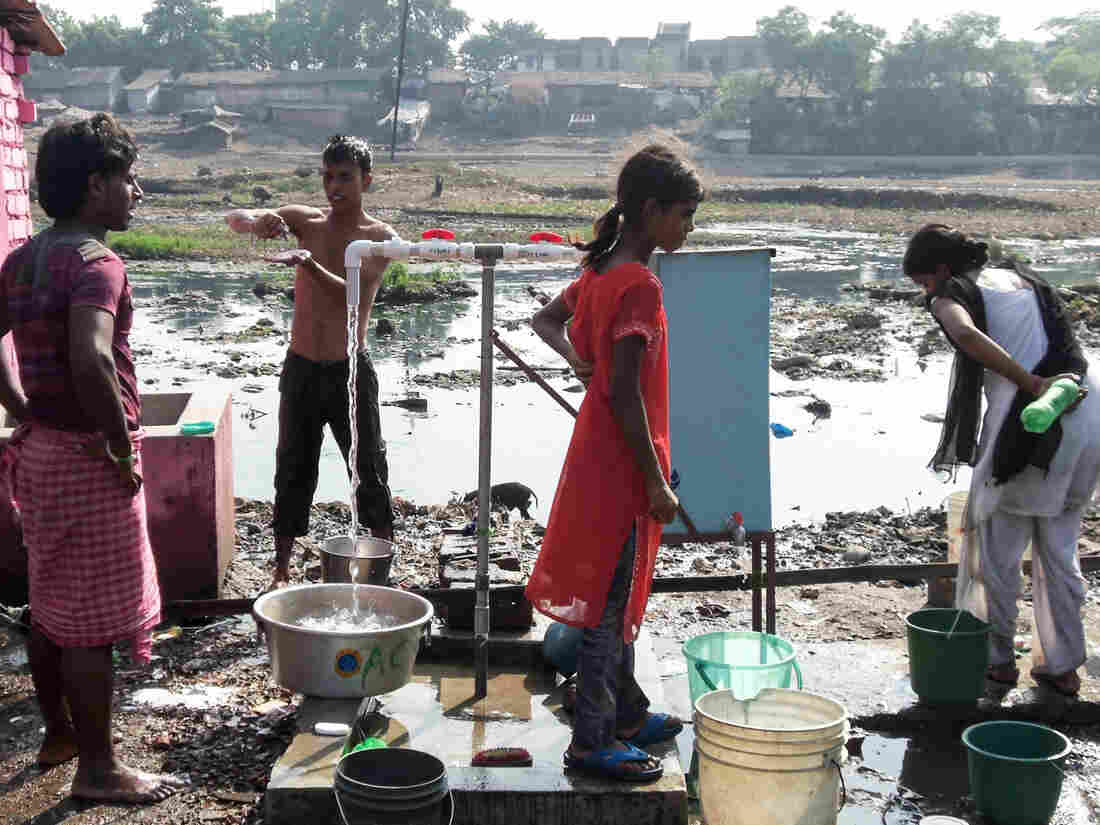 Slum dwellers near Calcutta get their water from a municipal pipe. Water coming out of the tap on the left is for bathing and so is untreated. The blue Zimba chlorinator is hooked up to the tap on the right, which is used for drinking water. Courtesy of Suprio Das/Zimba hide caption 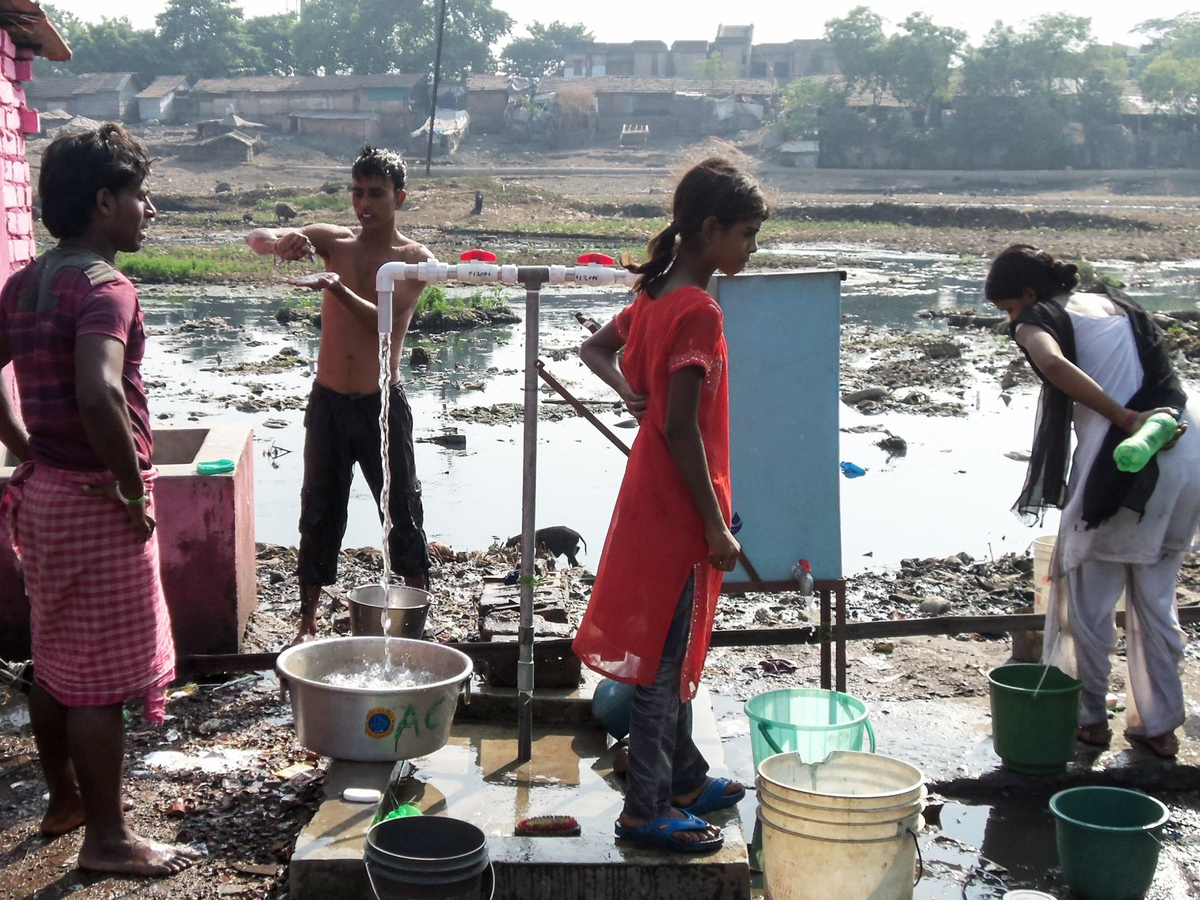 Slum dwellers near Calcutta get their water from a municipal pipe. Water coming out of the tap on the left is for bathing and so is untreated. The blue Zimba chlorinator is hooked up to the tap on the right, which is used for drinking water.

This isn't your average top 30 list. No Taylor Swift song is on it, it doesn't involve sports and it's not a listicle of the Internet's best cat videos. But it does have a device that adds chlorine to water so it's safe to drink — and a condom tied to a catheter that can stop bleeding when a woman is having a baby.

The Innovation Countdown 2030 (IC2030) is a list of 30 innovations that can potentially save millions of lives around the globe. And PATH, an international non-profit organization focused on solving global health problems through innovation, is the list creator.

And The Total Spent On Health In Impoverished Countries Last Year...

The U.N. is in the process of defining a post-2015 development agenda that will launch in September: a new set of Sustainable Development Goals (SDGs) for 2030.

To help the SDGs become reality, PATH decided to devise a list of 30 innovative medical devices, drugs, and treatments that have potential to transform global health over the next 15 years. The idea is to raise support for these high-potential innovations so they can accelerate the progress of reaching the sustainable development goals.

PATH received over 500 submissions for the project. To get down to 30, health experts looked at the stage of development, the ability to reach a large number of people, the cost compared to current options. The list went down to 175, then 61 and finally 30.

Of course, even on the Internet, where space is limitless, 30 is a long list.So PATH helped us narrow the list to five innovations that are already in use and show great promise.

PATH also crunched the numbers and built a model to help people understand the potential of some of the innovations. In a nutshell, the estimated impact looks at how many lives the new innovation will save from 2015 to 2030 if it swaps out all the existing interventions, and how much this overhaul would cost.

Every two minutes, a woman dies in childbirth. And severe bleeding after giving birth accounts for 30 percent of those deaths. This device, developed by Massachusetts General Hospital, is a low-cost, easy-to-assemble kit that helps stop the postpartum severe bleeding. It consists of a condom that's tied to a catheter. Clean water fills the condom through the catheter, inflating the condom and creating pressure in the uterus to stop the bleeding.

Ready yet? Currently in use in countries including Kenya and Sierra Leone. As of May 29 this year, UBTs have prevented 204 critically ill and hemorrhaging women from dying or disability, which includes a potential loss of fertility.

P.S.: The condom is just the plain ol' condom you can buy at your local drugstore.

Clean water isn't always easy to find in developing countries. This device is essentially a large box — about the height of a bedside nightstand but much thinner — preloaded with chlorine that can be hooked up to a water source. The pressure of the incoming water triggers the release of the right amount of sodium hypochlorite solution — that's basically bleach — to get rid of harmful microorganisms. The freshly chlorinated water flows out from the tap. The device can be hooked to most water sources, from hand-pumps to water faucets, within 30 minutes. The downside of traditional ways of chlorinating water with tablets is that people might forget to follow through. No way that'll happen with Zimba.

Ready yet? The Zimba chlorinator has been tested in India schools, Bangladesh slums and post-earthquake Nepal. The team hopes to work with NGOs to install Zimba units in additional areas where people don't have safe drinking water.

As many as one in ten newborns need help breathing. Many will die without proper care, particularly in developing countries where health centers and birth attendants often lack the equipment to help babies breathe. This device aims to solve that problem. This manual resuscitator only has six parts, including a mask and a plastic bulb that inflates the lungs of an unconscious baby when a health worker squeezes the bulb. Plus it's easy to assemble and take apart for cleaning.

Ready yet? Hospitals and clinics can order online. The going price is about $65 dollars, with discounts for nonprofits offered in 75 countries.

More than one in 20 pregnant women is affected by pre-eclampsia — that's high blood pressure that occurs during pregnancy and can cut back on the oxygen and nutrients the fetus needs. The condition can also put the mother at risk of seizures and accounts for about half of maternal deaths in developing countries. But health workers and patients don't always recognize the warning signs, such as high blood pressure and blurred vision.

The Microlife Vital Signs Alert (VSA) is a handheld device that measures blood pressure and pulse to calculate the patient's risk of going into shock -- in simple mathematical terms, that's heart rate over blood pressure. Interpreting the signals is as easy as reading a traffic light: green light means no risk, amber means the patient needs to be closely monitored, and red indicates emergency treatment is required. The device costs less than $20 and has an USB chargeable battery.

Ready yet? Microlife VSA is currently in use in seven countries in Africa and Asian in maternity, intensive care, and community settings. Further trials will take place in South Africa, Pakistan and India.

More than 200 million women don't have birth control options that are readily available. And each year, some 50,000 women die because of unsafe abortions. Injectable contraceptives, which last for months, are already popular in developing countries for their convenience and privacy. But a woman typically must travel to a clinic for the shot, and health workers need training to administer the contraceptive. Sayana Press is an injectable contraceptive that aims to solve the problem with its simple design: It's a single-dose of hormone packed into a non-reusable bubble with a needle attached. The injection is so straightforward that the research team is evaluating the possibility of having women give themselves the birth control shot at home.

Ready yet? The European Union has approved the Sayana Press for use. And as of March, nearly 100,000 doses have been administered in Burkina Faso, Niger, Senegal and Uganda.