Accessibility links
Look Out, Potholes! This 67-Year-Old Retiree Is Out To Fill You : Goats and Soda Gandgadhara Tilak Katnam is an ordinary guy with an extraordinary mission: getting rid of India's killer potholes.

Look Out, Potholes! This 67-Year-Old Retiree Is Out To Fill You

Look Out, Potholes! This 67-Year-Old Retiree Is Out To Fill You 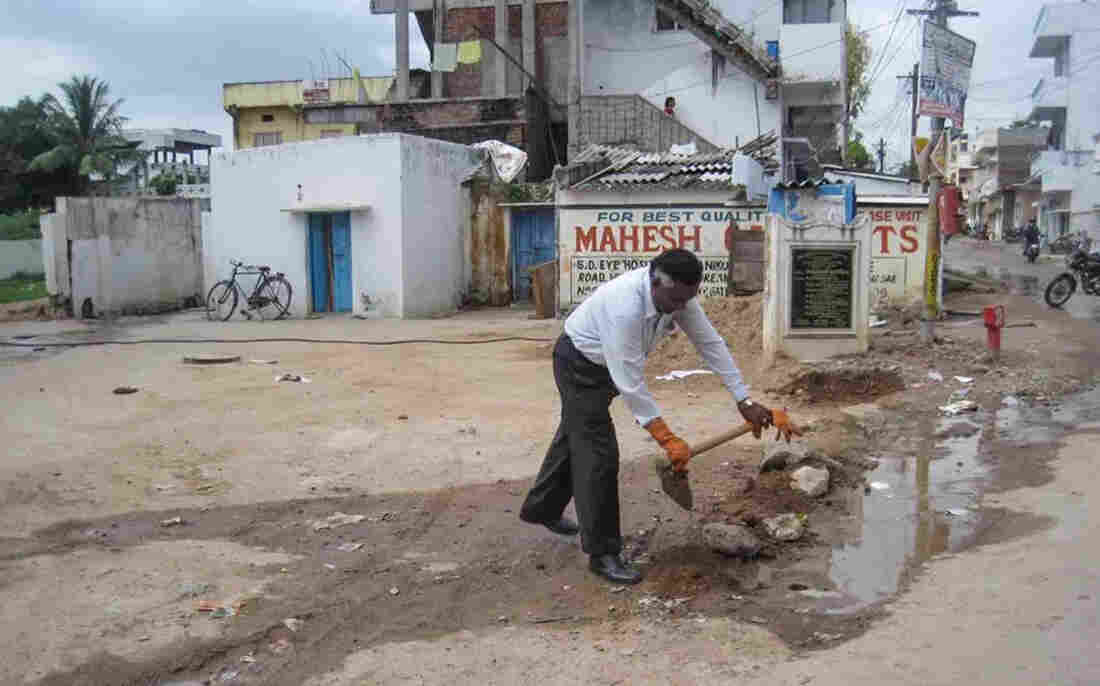 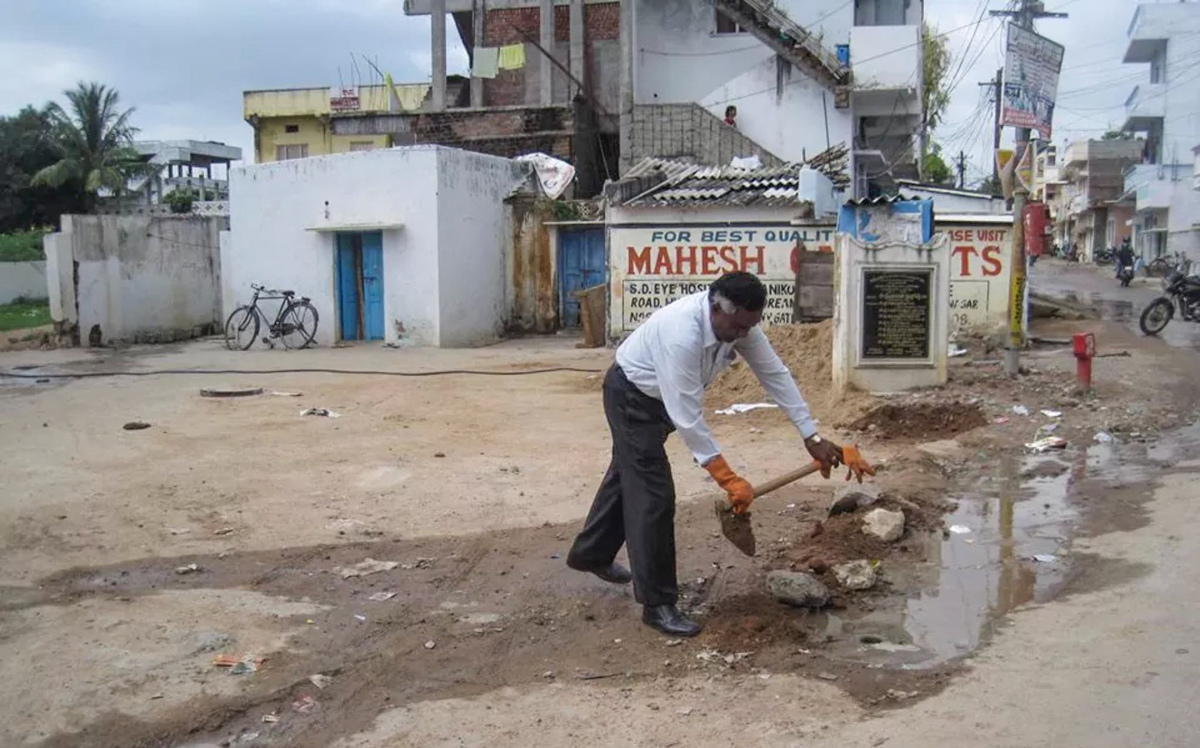 Another pothole bites the dust in India, thanks to the efforts of Gangadhara Tilak Katnam.

"You shouldn't be out there filling potholes at your age." That's what Venkateswari Katnam tells her 67-year-old husband, Gandgadhara.

Over the past five years, he estimates that he has filled around 1,100 potholes on the streets of Hyderabad. He carries bags of gravel and tar in the trunk of his Fiat, along with a spade, two brooms, a wire brush and a crowbar. When he spies a pothole — or learns of one from a Facebook message — he can usually fill it in under an hour. He clears out any debris or standing water, pours in the mix of gravel and tar, levels it off and waits about 30 minutes for it to set. He puts up red flags in English, Hindi and Telugu to make sure no one steps or drives in it. 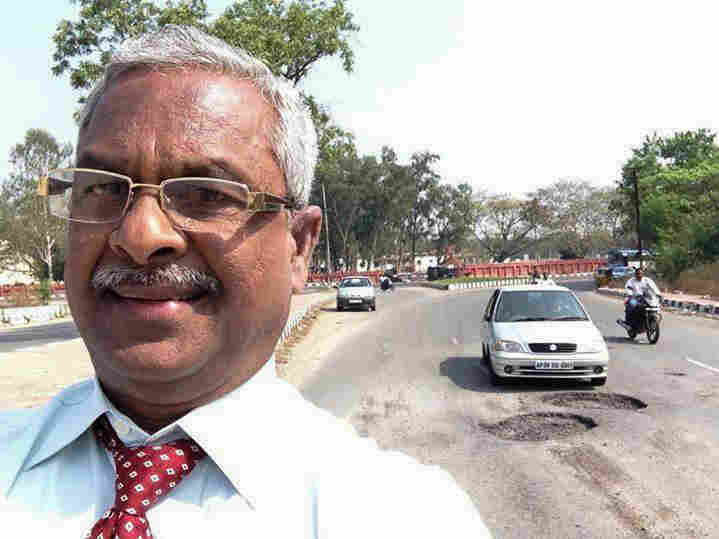 "If we want to see change," says pothole opponent Katnam, "we have to start doing it ourselves." Courtesy of Gangadhara Tilak hide caption 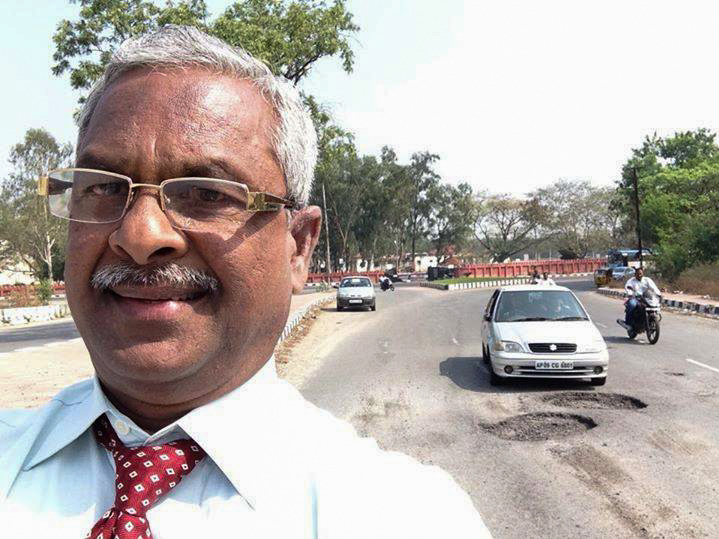 "If we want to see change," says pothole opponent Katnam, "we have to start doing it ourselves."

And when he's done, he takes a selfie to add to his collection of filled potholes.

He wasn't always obsessed with potholes. Gangadhara Tilak Katnam worked for the Indian Railways for 35 years, first as an inspector and later as an electrical engineer. Five years ago, while driving to work, he hit a massive pothole, splashing muddy rainwater onto a woman and her young child. Their clothes were ruined.

He hopped out to apologize, he says, "but that was not enough, I realized."

He already knew how to fill a pothole. As a child he used to watch road crews at work and eventually would lend a hand. He started with the potholes on a stretch of road just outside his house. At first he did it all himself, paying for supplies from his monthly pension of about $300. Now he's solicited some helpers from a group he started called Shramadaan — Hindi for "labor donation."

It's important work, he stresses. It's not just clothes that can be ruined when a car splashes through a pothole. Pedestrians, cyclists and motorists have been injured and killed by encounters with potholes that can be a foot deep. Google "India's killer potholes" and you'll see many sad stories.

"The solution to stopping this suffering is so simple and straightforward," Katnam says.

But he won't take cash donations, especially from folks outside of India who've learned of his work.

"This is the government's responsibility, and they have the money to fix the roads," he says. Fortunately, the government has stepped up. In June 2012, the Greater Hyderabad Municipal Corporate started providing some of the raw materials to Katnam. Currently, the city has allocated about 30 trucks in the city to pothole repairs. Katnam would like five of these trucks to become "pothole ambulances," responding to public calls to fill a pothole within 24 hours in Hyderabad.

And he'd like to see a toll-free number posted in public places that will get callers directly in touch with a city engineer who'll give out his or her name. That way, anyone who calls knows whom they're talking to — and whom to call back if the pothole isn't filled.

Katnam would also like police officers to become part of the campaign, reporting any potholes they run into.

Last month, Prime Minister Narendra Modi announced an initiative to create 100 "Smart Cities" in India with the help of Bloomberg Philanthropies. The idea is to use technology to improve urban life.

"How can a city be smart if you can't even drive in it properly and safely?" Katnam asks.

So he'd like to become a Smart City adviser. "Tell Mr. Modi, that I can make India pothole-free. And I don't want money. I don't want a salary. I want to see a better, safer country," he says, brimming with patriotism.

"If we want to see change," says Katnam, who describes himself as a Gandhian, "we have to start doing it ourselves."