Accessibility links
How A Law To Protect Disabled Americans Became Imitated Around The World : Goats and Soda In Africa, in Asia, in Latin America, people with disabilities want to know: How can we learn from the Americans with Disabilities Act so we can get on the bus, get married, build a life. 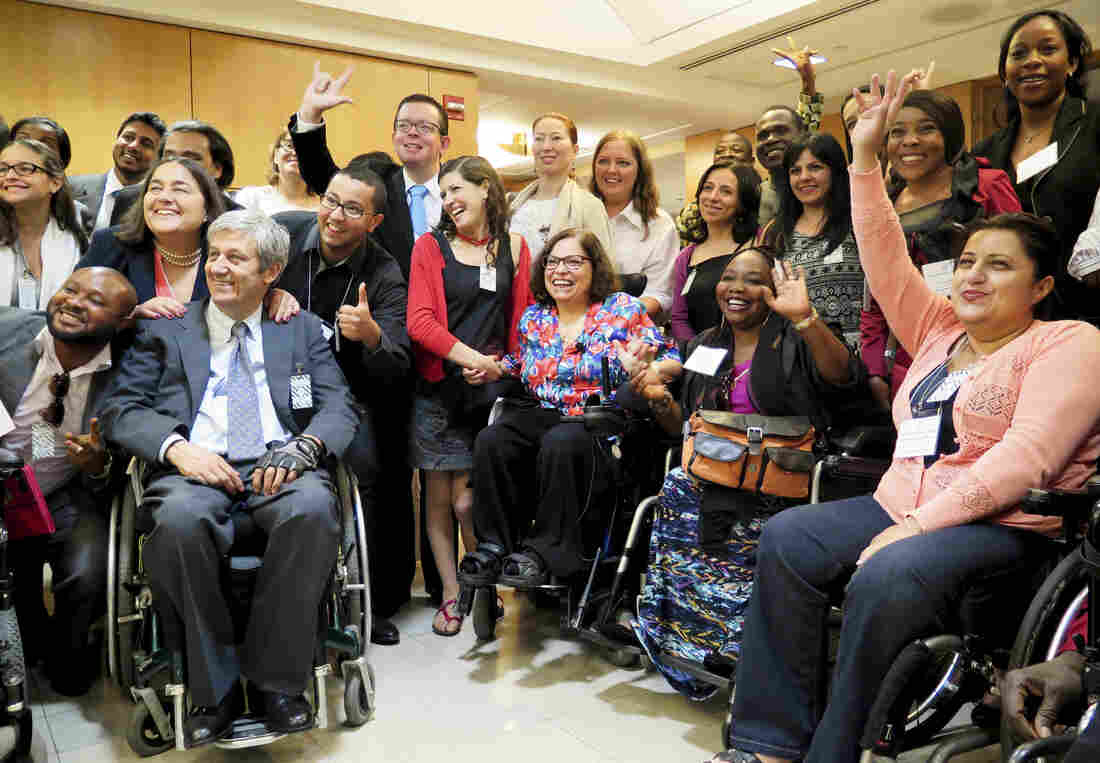 At the State Department conference for people with disabilities, adviser Judy Heumann (center) is surrounded by admirers from around the world. Joseph Shapiro/NPR hide caption 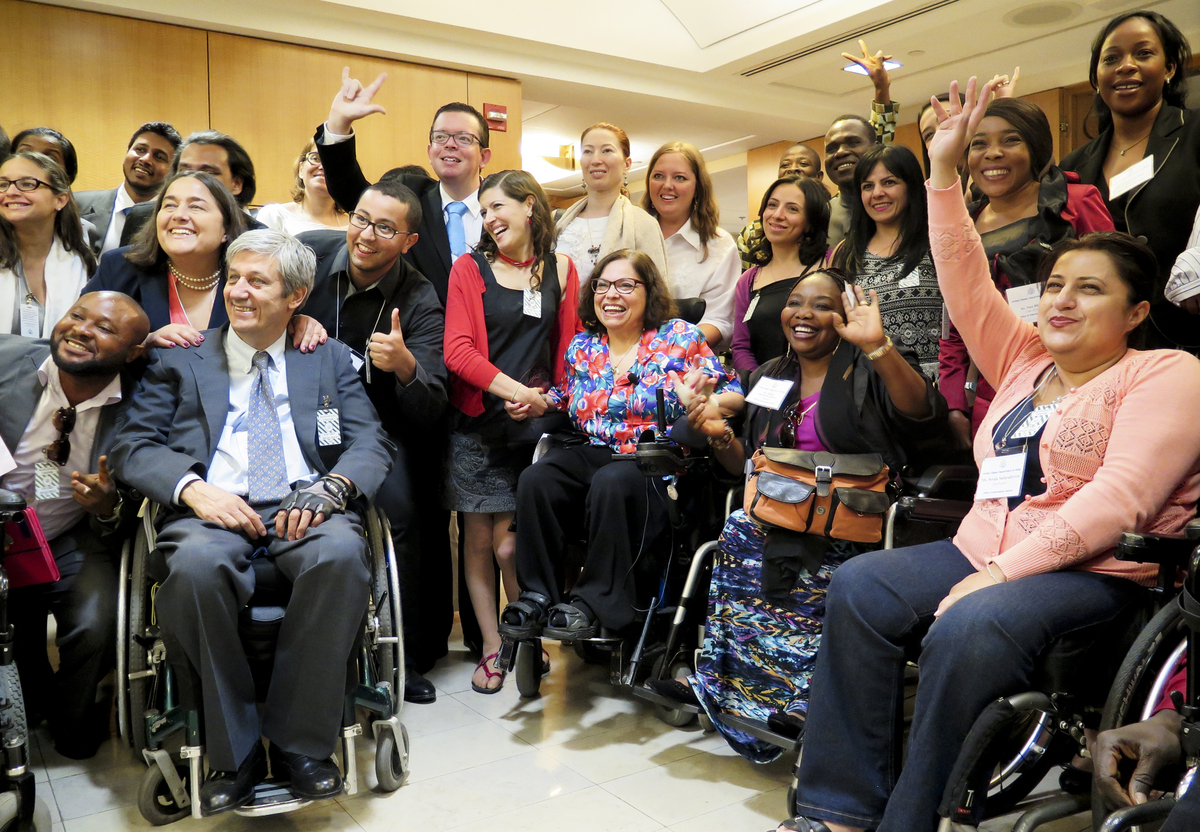 At the State Department conference for people with disabilities, adviser Judy Heumann (center) is surrounded by admirers from around the world.

They came from Armenia, Azerbaijan and Bangladesh.

From Kazakhstan, Lesotho and Mongolia.

From Nicaragua, Nigeria and China. From 33 countries in all.

They were people in wheelchairs, on crutches. Some were deaf or blind. And they all wanted to find out how their country could learn from the Americans with Disabilities Act (ADA), which banned discrimination based on disability in employment, government services and public accommodations.

That act changed the way people with disabilities in this country wanted Americans to understand their problems — not as issues of health but as ones of civil rights.

It's a very American response to solve a problem by protecting people with the guarantee of civil rights. So it may seem surprising that 25 years after the ADA was signed into law, the act has become one of America's most successful exports.

That was clear at a conference at the U.S. State Department this month, where some 50 people with disabilities from around the world — and the advocates who work with them — wanted to learn about American disability laws.

Patience Dickson-Ogolo of Nigeria (left) and Krishna Sunar of Nepal are advocates for people with disabilities in their home countries. Joseph Shapiro/NPR hide caption

"Everybody in this room is a leader. Or you wouldn't be here," Judy Heumann, the State Department's special adviser for international disability rights — who uses a motorized wheelchair — told the audience. "And we are slowly changing the world. And we will more rapidly do so."

But the problems in other countries are often much bigger than those faced by people with disabilities in the U.S. Often when other countries pass disability laws, there is little enforcement of those provisions. Poverty and attitudes are also barriers.

Patience Dickson-Ogolo, from the Advocacy for Women with Disabilities Initiative in Nigeria, said disabled women in her country often lack basic rights: They have trouble opening bank accounts and they are discouraged from marriage. Dickson-Ogolo, who uses a wheelchair, is an exception; she attended the conference with her husband.

Krishna Sunar, of the National Association of the Physical Disabled in Nepal, spoke about the April earthquake that killed or injured some 30,000 people. He asked that the U.S. help make sure reconstructed government buildings include wheelchair ramps. 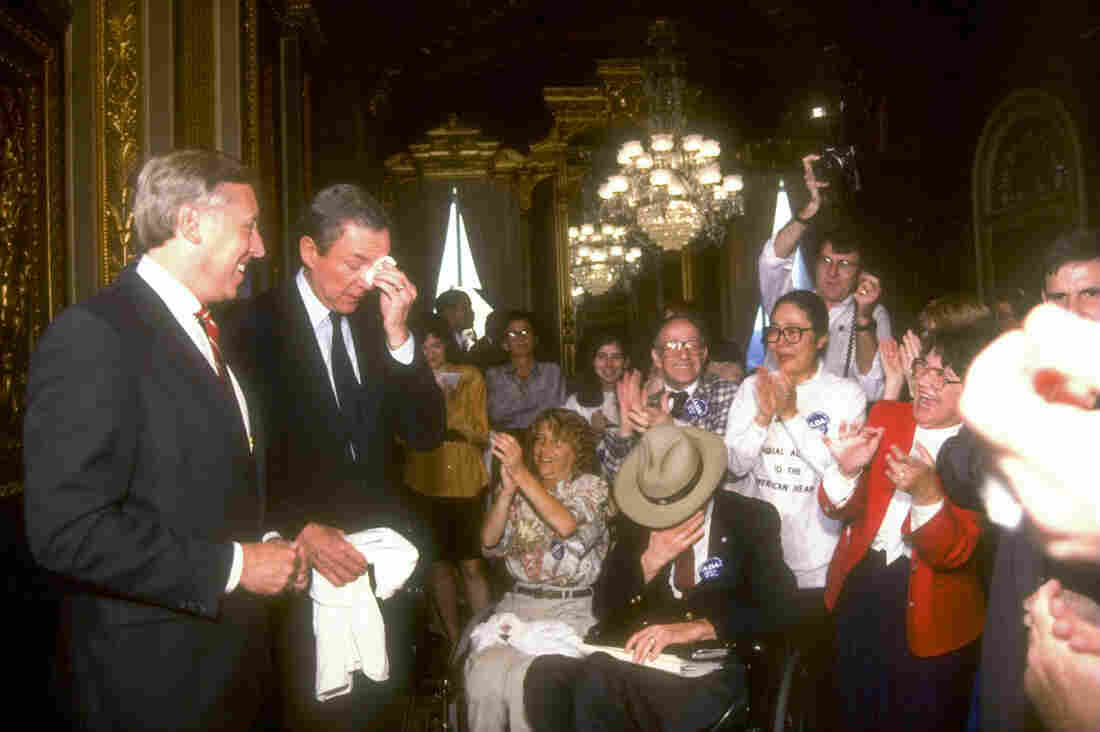 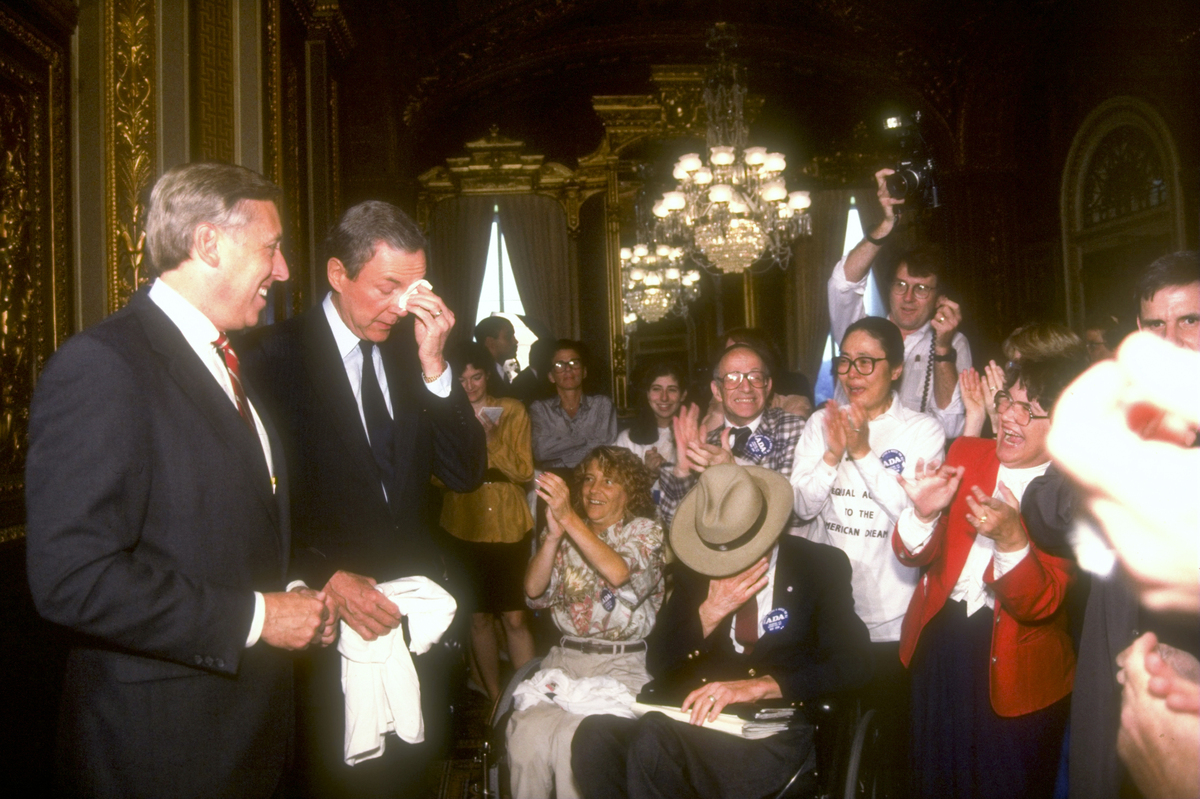 Elena Pascu, from the Center for Legal Resources in Romania, wanted advice on how to close down government-run institutions in her country for people with intellectual disabilities.

The ADA was signed into law by President George H.W. Bush on July 26, 1990. The idea was that people with disabilities weren't expecting cures. Instead, they were demanding access. For wheelchair users that could mean curb cuts, a motorized lift so they could board a bus, a ramp into a building so they could get to work or school. It meant they could live where they wanted and socialize with friends — just like people without disabilities.

At the State Department conference, participants know some of the history of the American disability civil rights movement and about Heumann, who is regarded as one of its heroes.

She was treated like a rock star: Participants crowded around her. They took selfies, gave her gifts and confided to her about their own problems back home.

When Heumann was an infant in 1949, she got polio. When she was old enough to start her education, her New York City school rejected her. They told her a girl in a wheelchair would be a fire hazard, but her mother fought and Heumann was able to attend.

She went on to college and earned a degree in speech therapy to help children with disabilities. But when she tried to become a teacher, the New York City school system again told her the wheelchair would be a fire hazard.

A frustrated Heumann moved to California, where she became a leader in the new disability civil rights movement — ending the exclusion of people with disabilities.

Years later, Heumann, the woman once thought too disabled to go to school or to be a teacher, became President Bill Clinton's assistant secretary of education, in charge of special education.

"What the U.S. really inspires people to do — is to do," Heumann said at the conference. "It's to say that we don't accept certain things." And to learn, by looking at U.S. civil rights movement, that "changes will not occur overnight." But they will come when people are persistent and "not only look at the problems but look at solutions and become a part of the solution." 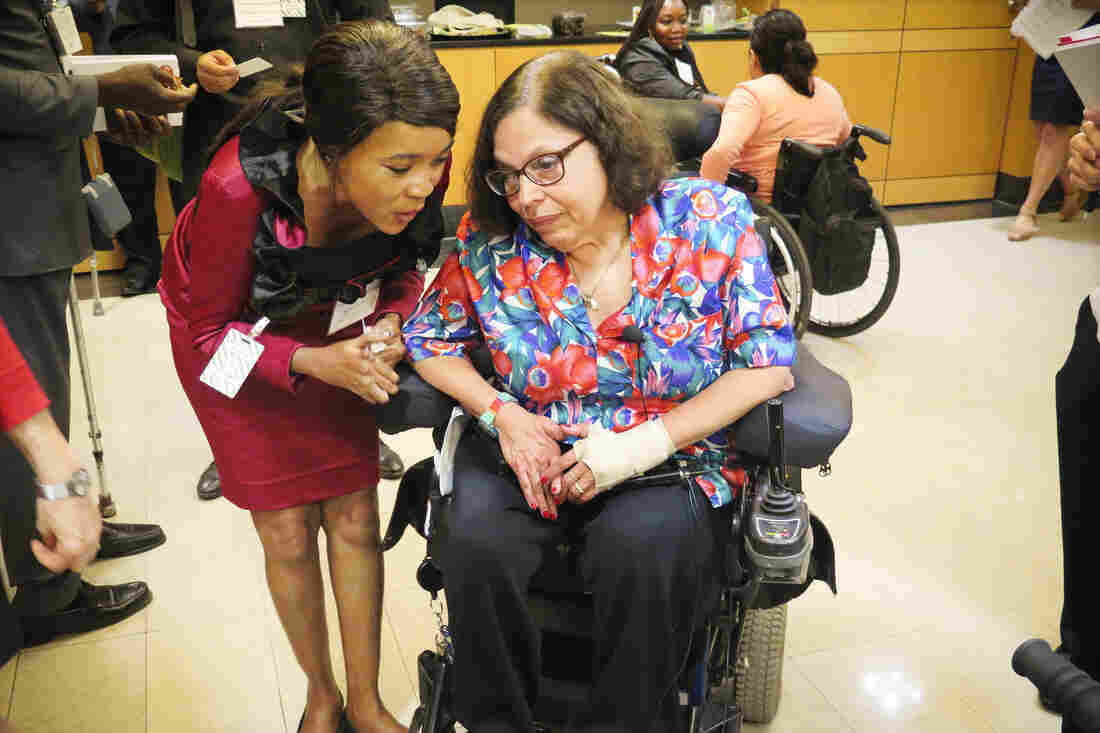 Judy Heumann (right), one of the leaders in the movement that led to the creation of the Americans with Disabilities Act, talks to a participant at the State Department event. Joseph Shapiro/NPR hide caption 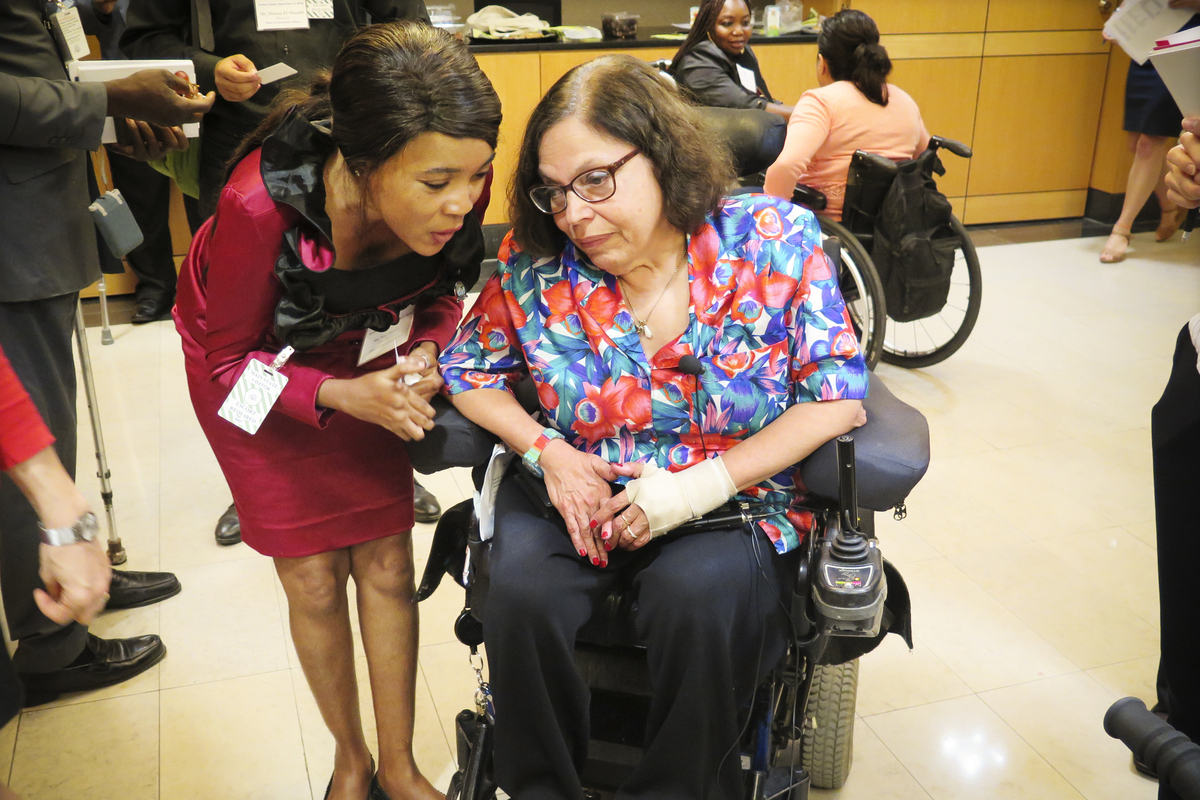 Judy Heumann (right), one of the leaders in the movement that led to the creation of the Americans with Disabilities Act, talks to a participant at the State Department event.

Dickson-Ogolo said that just a few days in Washington was eye-opening. She was able to get around easily in her wheelchair because of sidewalk curb cuts, lifts on buses, elevators to the subway and the wheelchair-accessible room and bathroom at her hotel.

Heumann knows the value of travel. Since taking the job at the State Department in 2010, she has traveled hundreds of thousands of miles to more than 30 countries. In some places, like rural Africa, people have never seen a person in a motorized wheelchair.

It was her own travel, years ago, that sparked some of her push for rights in the U.S. In 1972, she visited Germany, where her parents were born, and Sweden. She saw how people with disabilities there had access to health care and social welfare programs as well as sports programs.

"Sometimes, it's really hard to imagine something or to dream something you've never experienced," says Susan Sygall, co-founder and head of Mobility International USA, one of the many American nonprofit groups that trains people with disabilities from around the world.

In 2006, one of the biggest civil rights protections yet to be inspired by the ADA was adopted by the United Nations. The Convention on the Rights of Persons with Disabilities lays out basic civil rights — getting an education, a job — that would be protected for the world's 650 million people with disabilities.

A total of 157 countries have ratified the U.N. convention. But opposition in the U.S. Senate — where there is worry that an international treaty will overtake U.S. laws — means the U.S. is one of the few countries yet to ratify it.