Accessibility links
What Botswana's Teen Girls Learn In 'Sugar Daddy' Class : Goats and Soda They often think an older guy is a great boyfriend. They believe he's less likely to have HIV than a teenager. Plus, he's flush with cash. How do you get them to change their mind? 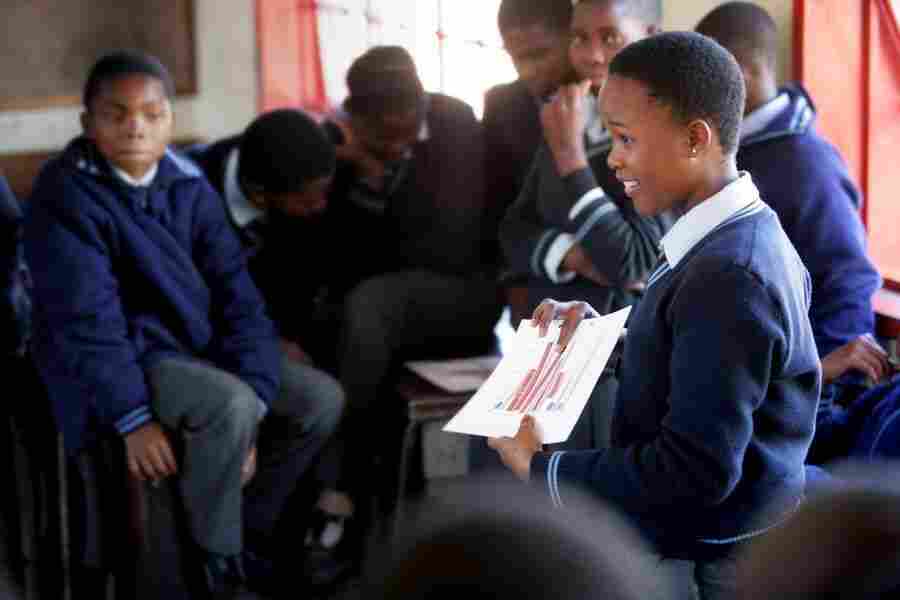 The bar chart tells all: That's how eighth-graders at Bakgatle Community Junior Secondary School in Botswana can compare the HIV infection rate of older men and of teenage boys. Don Boroughs for NPR hide caption 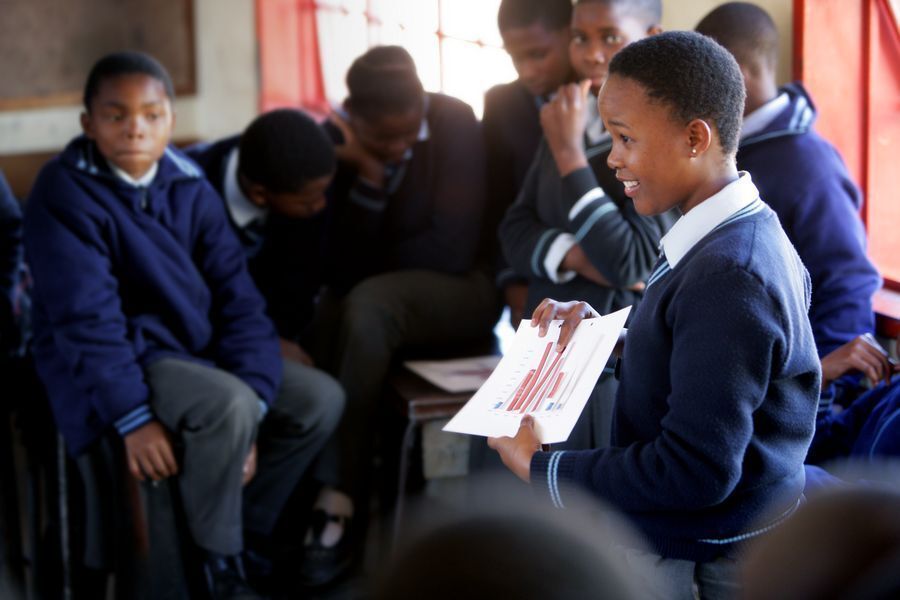 The bar chart tells all: That's how eighth-graders at Bakgatle Community Junior Secondary School in Botswana can compare the HIV infection rate of older men and of teenage boys.

Chilo Ketlhoafetse struts around an eighth-grade classroom like the coolest guy in Botswana, warming the students up to talk about an awkward subject. He calls out "Nomhlaba!" and they respond "Auwe!" — nonsense words from a local childhood game. Soon he has the students clicking their fingers, dancing and following his every word.

Within an hour, the students at the Bakgatle Community Junior Secondary School in Mochudi are chanting the only message he wants to get across to them: "Older partners are riskier."

Ketlhoafetse is one of a dozen facilitators for Young 1ove, an organization with the sole aim of protecting girls from HIV by highlighting the risks of "sugar daddies" who trade gifts for sexual relationships. The group has a hard-won mandate from the Ministry of Education to take its sugar-daddy classes to every school in Botswana, which has the world's third highest level of HIV prevalence. 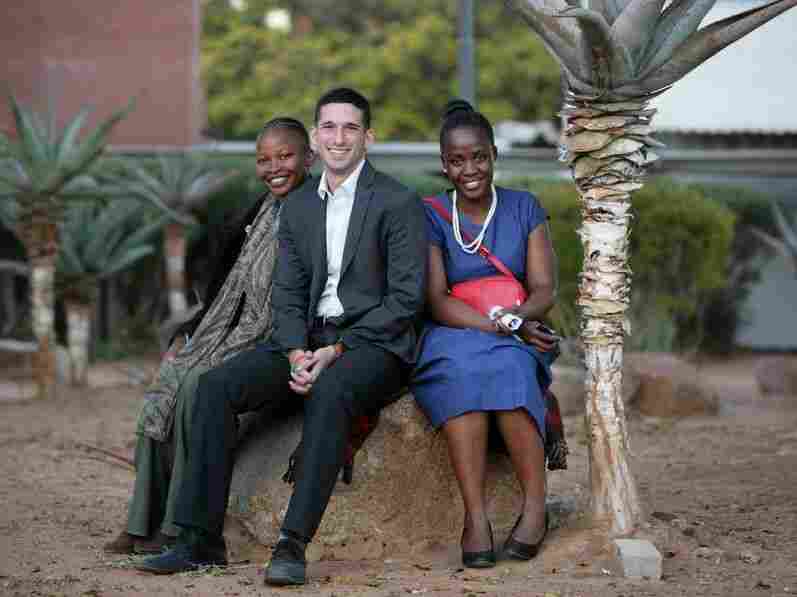 The founders of the Young 1ove program to debunk myths about sugar daddies and HIV/AIDS (from left): Moitshepi Matsheng, Noam Angrist and Unami Moatswi. Don Boroughs for NPR hide caption 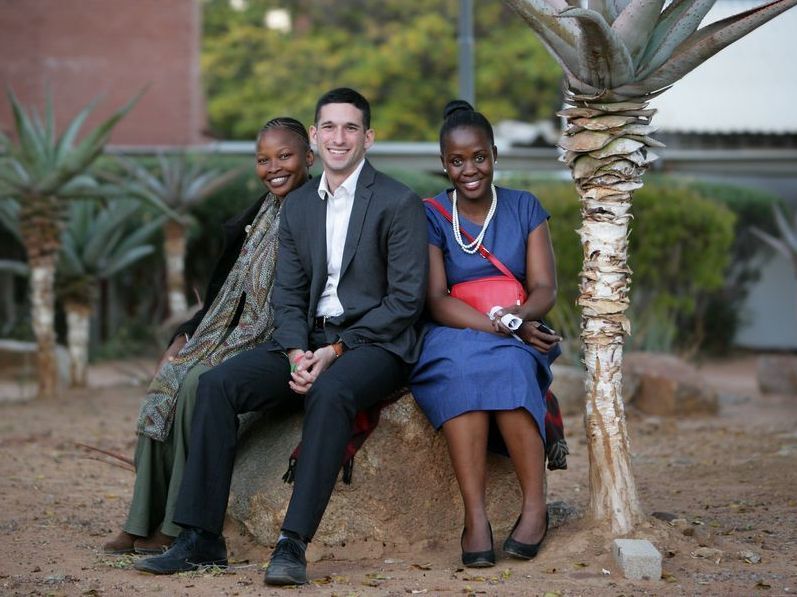 The founders of the Young 1ove program to debunk myths about sugar daddies and HIV/AIDS (from left): Moitshepi Matsheng, Noam Angrist and Unami Moatswi.

Young 1ove — the numeral 1 in place of the letter L is intentional — is the brainchild of a 24-year-old Massachusetts Institute of Technology graduate who came to Botswana on a Fulbright Scholarship. Sex education was the furthest thing from Noam Angrist's mind when he arrived at the University of Botswana, but, he says, "I was hearing about sugar daddies all the time."

Then he recalled a study he had read during an undergraduate course on development economics. In the paper, Stanford University economist Pascaline Dupas described a randomized trial she conducted in Kenya from 2003 to 2005. Schoolgirls were taught that older men have much higher rates of HIV than young men. One year later, the girls who had received this short training session were 28 percent less likely to have become pregnant than the control group, and 61 percent less likely to be bearing the child of a man five or more years older.

"I thought, 'This is my chance to turn research into action.' "

At the Bakgatle School, Ketlhoafetse withholds the key message until the eighth-graders have been given a chance to guess — incorrectly — the patterns of HIV prevalence in their country. He splits the students into groups and hands each one a blank bar chart and a set of mixed-up, unlabeled bars. Each bar represents some age cohort of Botswana men and their rate of infection.

Every group sticks bars onto the chart to show HIV prevalence tapering off among older men. They defend their choices with teenage logic.

"At 35 to 39, HIV gets lower because your hormones are wearing out," explains one, and pointing to the next bar adds, "by 40 to 44, you're getting old and not sexually active."

After each group has presented its chart, Ketlhoafetse asks for a drum roll of hands on metal desks and reveals the actual graph. It shows that 43 percent of men over 40 years of age in Botswana carry HIV, far higher than the 4 to 5 percent infection rate of men in their teens and early 20s.

Jaws drop. "Oh my gosh!" blurts out one girl.

The facilitator carries them through the logic of cumulative risk. "Can you get to 40 without first being 21?" he asks.

He does not have to tell them that older men are willing to offer gifts in exchange for a sexual relationship. A survey of 600 high school girls age 18 and older in the capital, Gaborone, found that about four in 10 had been propositioned by a man at least 10 years older. Most said they turned down these offers, but among those who were sexually active, a third were in a relationship with an older man.

The study, conducted by Josephine Nkosana for her Ph.D. dissertation, found that 79 percent of the girls having sex with older men agreed with the statement: "The reason girls go out with older men is that they are able to provide gifts and money."

"When I was a student, it was considered cool to date an older person, and the coolness came out of what you received," says Moitshepi Matsheng, one of the women who founded Young 1ove with Angrist.

Another co-founder, Unami Moatswi, explains that poor students arrive in Gaborone from small towns with government scholarships that cover tuition and basic needs only.

"Young people are attracted to a posh lifestyle they cannot afford," she says. "You want to put on that shoe, the new jeans, and live beyond your means."

As attractive as these small luxuries might seem, Angrist doesn't think these girls would bet their lives on them. Too many also believe an older lover is a safer lover. "They're making decisions based on flipped info," he says.

"Girls are making a cost-benefit analysis, and the benefits are clear, but they think there are no costs."

The price of a sugar daddy is actually even higher than HIV prevalence alone would suggest. A recipient of gifts dealing with a much older man is in a weak position to negotiate for safe sex. In the Gaborone study, girls with older partners were half as likely to have used a condom in their first sexual encounter.

But can Young 1ove really counteract the continual onslaught of worldly temptations with a one-hour lesson? Angrist is not content to cross his fingers and hope that it will work.

To test the effectiveness of sugar-daddy classes, Young 1ove's efforts for the past year have been structured as a research project. Of the 343 schools visited, some were randomly selected as the control group, receiving a questionnaire but no training. At other schools, Young 1ove's facilitators provided all of the students in grades 6, 8 and 9 with sugar-daddy training. In total nearly 30,000 students took part.

Later this year, the Young 1ove team will revisit all 343 schools, track down every girl who dropped out and ask if she became pregnant. If so, they will note the age of the father. Since pregnancy is the result of unprotected sex, it serves as a reliable indicator of HIV transmission risk.

One person eagerly awaiting those results is Alix Zwane, executive director of Evidence Action, a Washington, D.C.,-based organization that takes scientifically tested development ideas and scales them massively. Evidence Action has helped take the Deworm the World program to 200 million children a year and is now monitoring Young 1ove.

If the results confirm the success of the Kenyan study, "that's a very large number," says Zwane. "If we could see a one-third reduction in teen pregnancies, it could really be transformative for the next generation of girls in Botswana."

The potential benefits go beyond HIV prevention, says Zwane, since reducing teenage pregnancies could lead to higher graduation rates. Both the "energy and vibrancy" of the sugar-daddy presentation Zwane recently monitored and the "lightning bolt" reaction of the students gives her some hope that the results will be positive.

If so, Angrist and his team would like to expand throughout southern Africa. "If it works, we want to get this to millions and millions of kids," says Angrist.

For now, anecdotal evidence that the message is reaching these girls keeps the team of 50 going during long days visiting remote villages in this sparsely populated country the size of Texas.

Matsheng, who was 6 years old when her mother died of AIDS, says, "When I see the students gasping when they reveal the graph, that's the reaction that really matters."

At the Bakgatle School, there are signs that the message is sinking in. Before he departs, Ketlhoafetse, mustering all of his considerable charm, walks around the room offering his Blackberry phone to various girls. One by one, they refuse the offer.