Accessibility links
Wheelchair Beauty Queen Sings For Toilets : Goats and Soda Miss Wheelchair Nigeria advocates for people with disabilities. This week, she introduced President Obama as he spoke to young African leaders. But she still faces discrimination in public bathrooms. 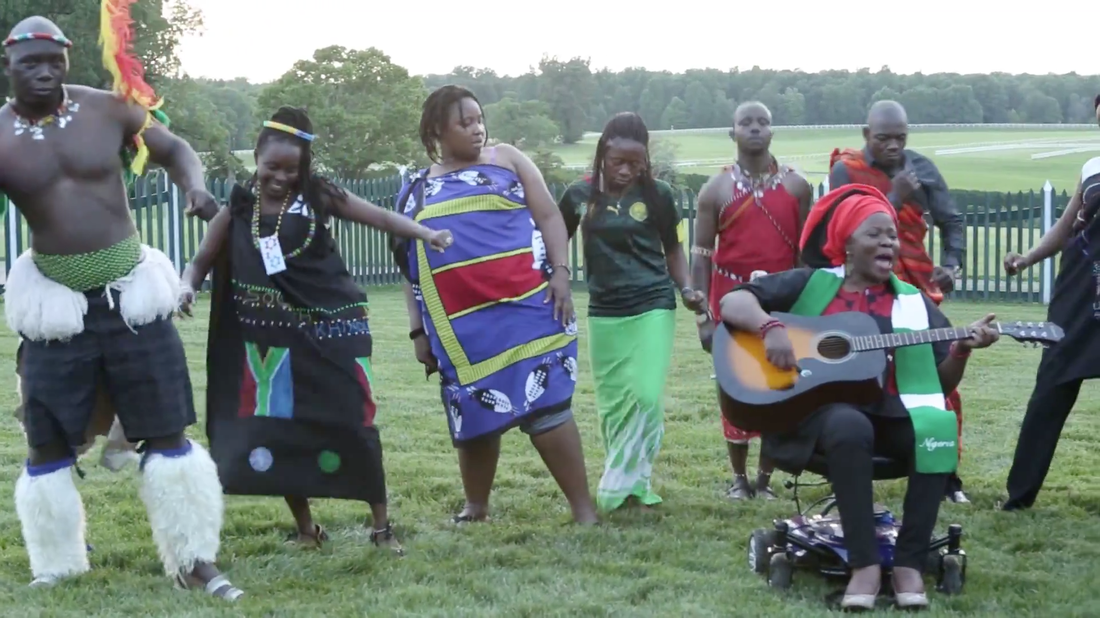 Grace Jerry performs her original single "E Go Happen" at a gathering of young African leaders at Montpelier, James Madison's home. The lyrics say: "Yes we can, sure we can change the world." YouTube hide caption Grace Jerry performs her original single "E Go Happen" at a gathering of young African leaders at Montpelier, James Madison's home. The lyrics say: "Yes we can, sure we can change the world."

Grace Alache Jerry is everything you'd imagine a pageant winner should be — beautiful, smart, articulate. She's a gifted musician, holds a diploma in law and even campaigns for the less fortunate.

But Jerry is no ordinary beauty pageant queen; she's Miss Wheelchair Nigeria. That's right, Jerry doesn't strut around in stilettos. Instead, she rolls around in an electric wheelchair while wearing comfy Chuck Taylors.

As Miss Wheelchair Nigeria, Jerry is the spokeswoman for the 25.5 million people living in Nigeria with disabilities. And she takes her position seriously. She meets frequently with Nigeria's leaders to advocate for equality and throws benefit concerts to support the disabled.

President Obama's Young African Leaders Initiative, which launched in 2010, brings 500 activists and entrepreneurs from sub-Saharan Africa to the U.S. as Mandela Washington Fellows. They spend six weeks taking classes at higher education institutes. We caught up with some of the entrepreneurs and activists at this week's YALI summit, which marked the end of their studies in the U.S.

And this week in Washington, D.C., as a participant in the Young African Leaders Initiative (see box), she introduced President Obama when he came to speak to the group.

Jerry wasn't always in a wheelchair.

Thirteen years ago, she became paralyzed after she was hit by a drunk driver. She was 21 at the time. The news that she would never walk again was difficult to accept.

"I remember being depressed for so long that my hair started falling out," Jerry says. "I couldn't be around others because I became wild and violent. I blamed the people around me for what had happened."

After coming to terms with her paraplegia, Jerry decided to take music to a professional level. She had been an avid singer since she was 7, when she first joined the church choir. In fact, she had been on her way home from choir practice when she was in the accident.

Today, she's became well-known as a Nigerian gospel artist and as a woman who sings openly about discrimination against those with disabilities.

Even with the title of Miss Wheelchair Nigeria, the pageant winner says she often feels excluded in her country.

She's been invited to leadership conferences in buildings that don't have elevators. So if the meeting takes place on the second or third floor, she can't attend.

"When I arrive, [the organizers] say to me, 'Sorry we didn't even think about you. We'll send you the details of the meeting later,' " Jerry says. "How am I supposed to influence decisions when I can't even attend the meetings?"

Other times, Jerry struggles to schedule meetings with leaders. That's when she has to pull the "But I am Miss Wheelchair Nigeria" card. And it works. Although her reign technically ran from 2010 to 2012, a subsequent pageant was never held, so Jerry still touts her crown when she needs to.

Public restrooms are another issue. Bathroom stalls in her country often aren't wide enough for her wheelchair to fit thru.

"At that point I'm faced with one of two decisions: I can either crawl on the floor to ease myself or pee or poop myself," she says. If she's pressed, she admits that she often opts for the latter.

Jerry's struggles inspired her to create the nonprofit organization Inclusive Friends, which works to bring awareness to issues of discrimination against the disabled.

One of her favorite initiatives is "Music for Toilets" (she helped think of the name). It's a series of benefit concerts that she's organized — and sung at — twice now. Sales of tickets and CDs go toward installing flush toilets and bringing clean drinking water at schools for children with disabilities.

"Imagine a child that has polio or a child that has to move around in a wheelchair who gets to a pit toilet," she says. "You know how unhygienic a public toilet is, so imagine a girl with a disability having to crawl on the floor to be able to access it. Look at the danger she is faced with."

Grace Jerry: 'I Am Grace'

A performance by the Nigerian singer Grace Jerry, who is the country's wheelchair queen.

The first "Music for Toilets" funds went to a school for the blind in 2012. Twenty toilets were installed. And after hearing about the fund raiser, a donor provided money to install a solar-powered fountain at the school as well. Before that, the children drank water from a hand-dug well that wasn't covered to prevent contamination.

The second benefit concert was in 2014. The goal was the same: purchase toilets and install safe drinking water systems at six special needs schools. Inclusive Friends raised enough money to help three schools but is still seeking funds to help the rest.

So in addition to giving concerts and putting out CDs, Jerry says she will keep singing for toilets.

Grace Jerry Sings 'I Am Grace'