Accessibility links
One Man's Quest To Combat Counterfeit Drugs — With A Suitcase : Goats and Soda Fake and shoddy medications kill about 100,000 people around the world each year. Many "drugs" are no more than just chalk or water. An engineer in Boston is trying to change that.

One Man's Quest To Combat Counterfeit Drugs — With A Suitcase

One Man's Quest To Combat Counterfeit Drugs — With A Suitcase 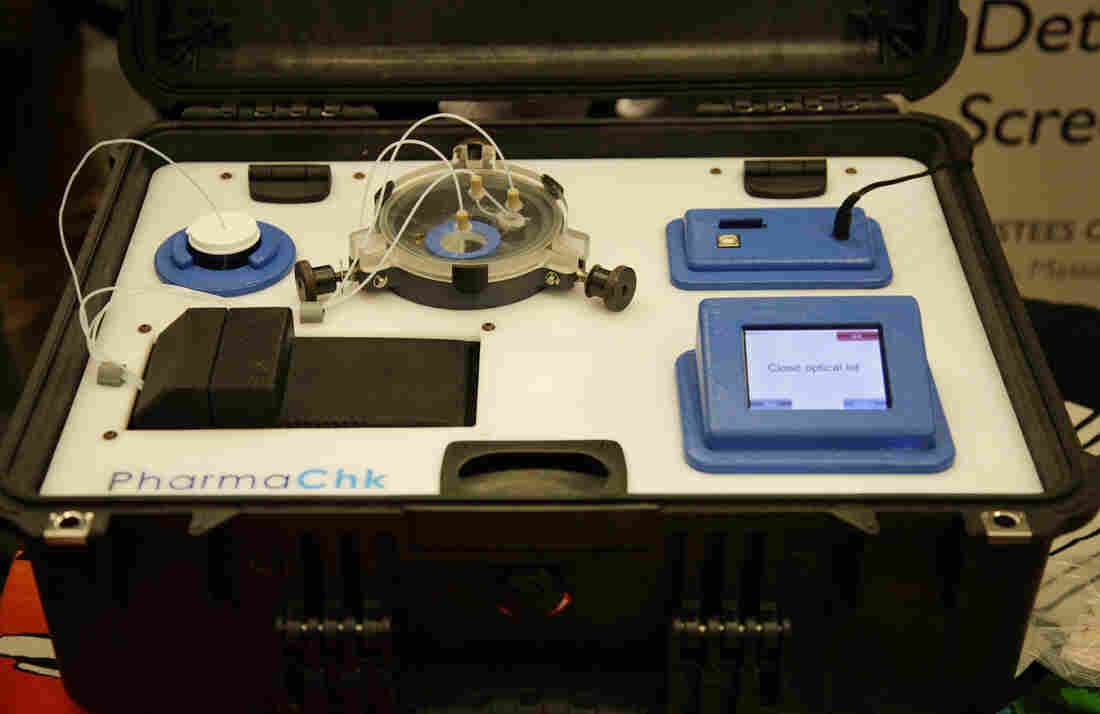 The PharmaChk is a bit like a litmus test for drugs: You pop in a pill at one end, and in 15 minutes, a number appears on a screen telling you the drug's potency. Mahafreen H. Mistry/NPR hide caption 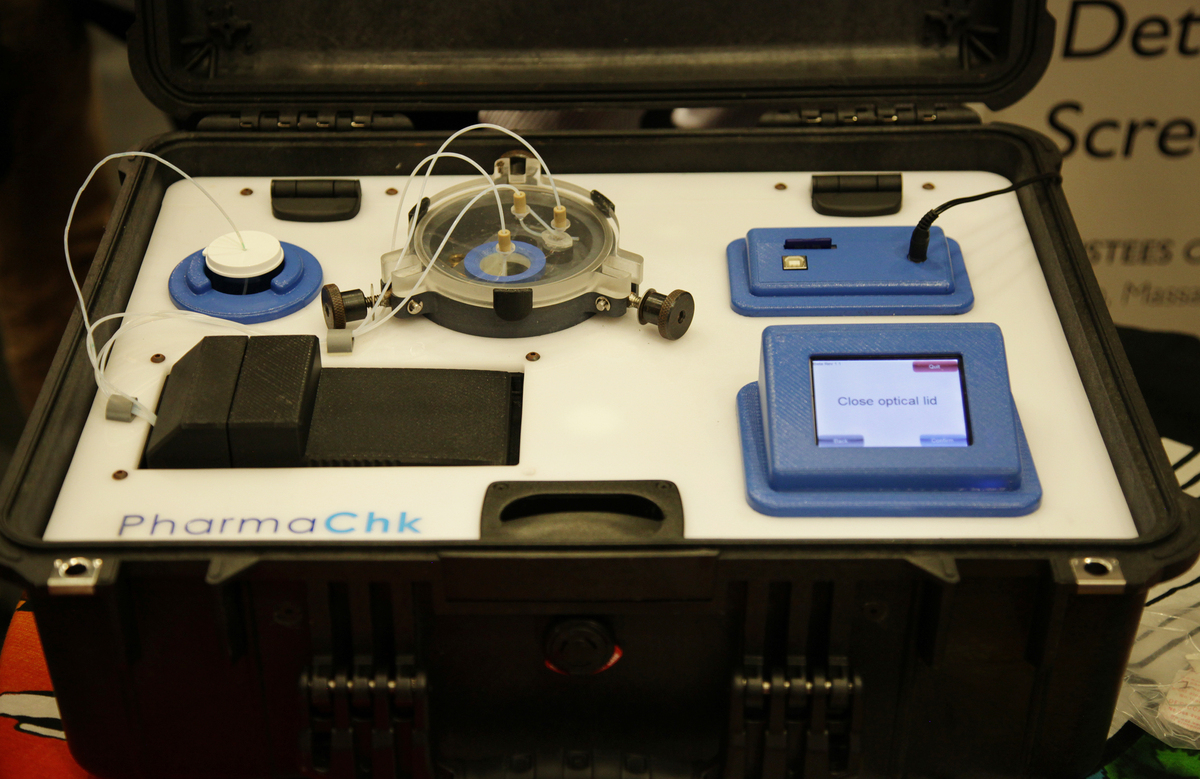 The PharmaChk is a bit like a litmus test for drugs: You pop in a pill at one end, and in 15 minutes, a number appears on a screen telling you the drug's potency.

In a small house in rural Kenya, a young woman gives birth to a healthy little girl. Before anyone can celebrate, the mother starts bleeding. The woman will die soon if the bleeding doesn't stop.

Luckily, the midwife has a drug in front of her, called oxytocin. It can easily stop the postpartum bleeding and save the women's life. She takes the medication, but nothing happens. It doesn't work.

This story is fictitious. But the scenario is all too common.

The problem is counterfeit drugs — medications that don't have the active ingredient or have insufficient quantities of it to be effective. In other words, drugs that don't work.

Counterfeit drugs account for roughly $75 billion of the $900 billion global pharmaceutical market — and about 100,000 deaths a year in Africa alone. In Kenya, up to 30 percent of drugs on the market are counterfeit, the World Health Organization reported. Many "drugs" are no more than just chalk or water.

One man in Boston is trying to change that.

Muhammad Zaman, a biomedical engineer at Boston University, has designed a suitcase that detects fake drugs. Called PharmaChk, the device is about the size of a carry-on bag. When you open it up and pop a pill into the designated spot, it tells you whether the drug is real or not.

Zaman showcased PharmaChk at the annual DevelopmentXChange conference in Washington, D.C., a few weeks ago. Back in 2014, he won a $2 million grant from Saving Lives at Birth to bring PharmaChk closer to commercial production.

"The idea here is very simply. It's a method to measure the potency of the drug," he says, demonstrating a prototype of the device to Goats and Soda at the conference. "Anybody can get trained in 15 minutes."

The outside shell of PharmaChk is hard plastic. Inside are wires, chips and tiny channels that shuttle liquid around. In essence, the device measures the concentration of a drug's active ingredient and how fast it dissolves.

For example, say you want to test a malaria drug. It can be a pill, powder or a solution. You simply mix the drug with plain water and combine it with a second solution – a fluorescent probe that comes with the kit. In this case, the probe is developed specifically so that it binds to active ingredients in malaria drugs.

"When there's a reaction between the probe and the drug, there is light," Zaman says. "The light that comes out is directly proportional to the amount of [active ingredients in] the drug.

"Imagine you are dealing with a drug that is completely fake," he continues. "When you add the probe, there is no light. We can say there is no active ingredient in the drug."

The interaction between the drug and the probe takes place inside a silicon-polymer testing chip that sits atop a tiny camera, all embedded in the suitcase. The camera captures the light, and the software translates the readings.

Report: Action Needed To Wipe Out Fake And Substandard Drugs

It's similar to the litmus test — a chemical way of testing the acidity of a solution — but instead of color, you have a quantitative number that tells you how much active ingredient there is in the pill. The results are then displayed on a touch screen.

Zaman isn't sure yet how much the PharmaChk will cost, but he projects it will less than the GPHF-Minilab, a similar device already out on the market. The Minilab is also shaped like a suitcase, but it weighs about 200 pounds. And it does not provide testing for liquids. It also takes hours to process samples, compared to Pharmachk's 15 minutes.

Zaman and his team took PharmaChk to Ghana last year to test it out in city hospitals, clinics and small pharmacies — and to see what people think of the device. The team plans on returning to Ghana again this year. Eventually they want to try it out in rural communities, as well.

Here in the U.S., we rely on regulations to ensure medications are what their labels say they are. These regulations are missing or don't work in many developing countries.

Such problems will always be there, Yazdi says, but when health workers know whether the drug is fake or not, they can reject it on the spot. "They will know, and they won't buy it," he says.

Currently, Zaman and his team have standard probes for antimalarial drugs and antibiotics. They plan to develop more probes for testing tuberculosis medications and uterotonics — drugs that help control postpartum hemorrhage.