Accessibility links
What Jimmy Carter Did After His 'Involuntary Retirement' : Goats and Soda The former president is now fighting cancer. For the past 30 years, he has fought to wipe out diseases that plague millions of people. The efforts have brought one parasite to the edge of eradication.

What Jimmy Carter Did After His 'Involuntary Retirement'

What Jimmy Carter Did After His 'Involuntary Retirement' 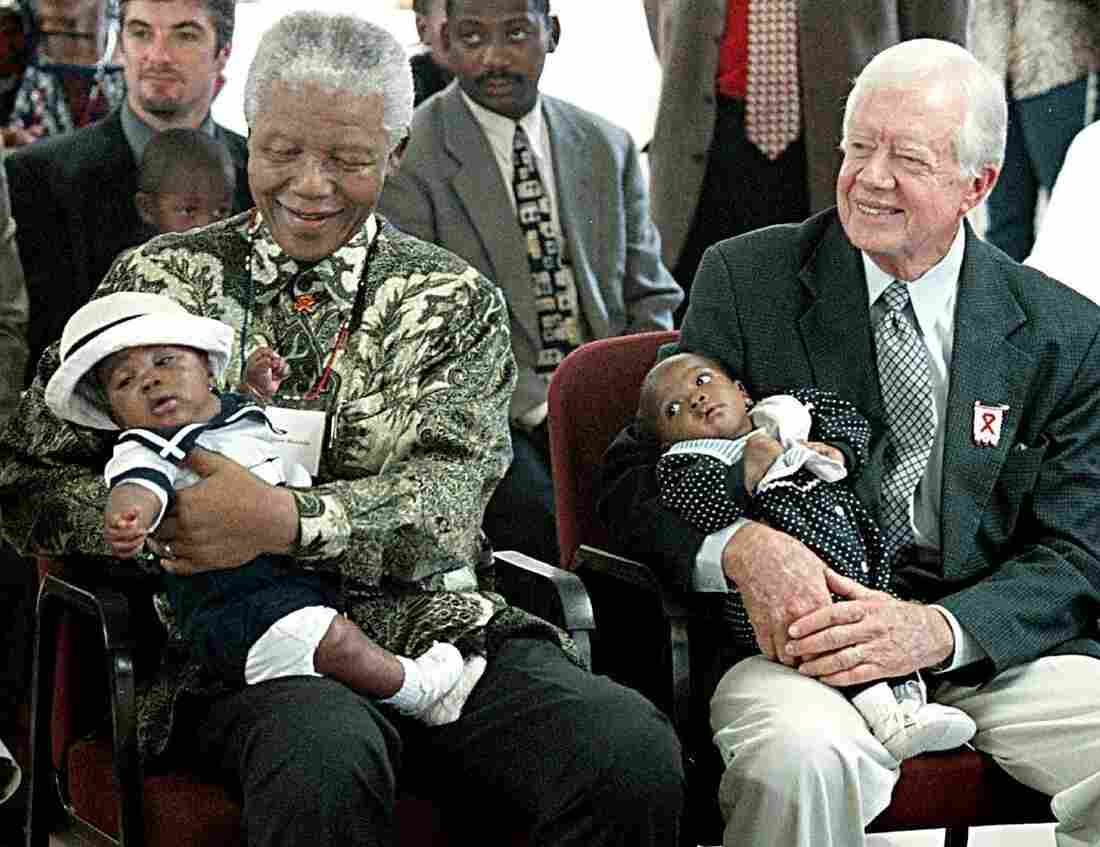 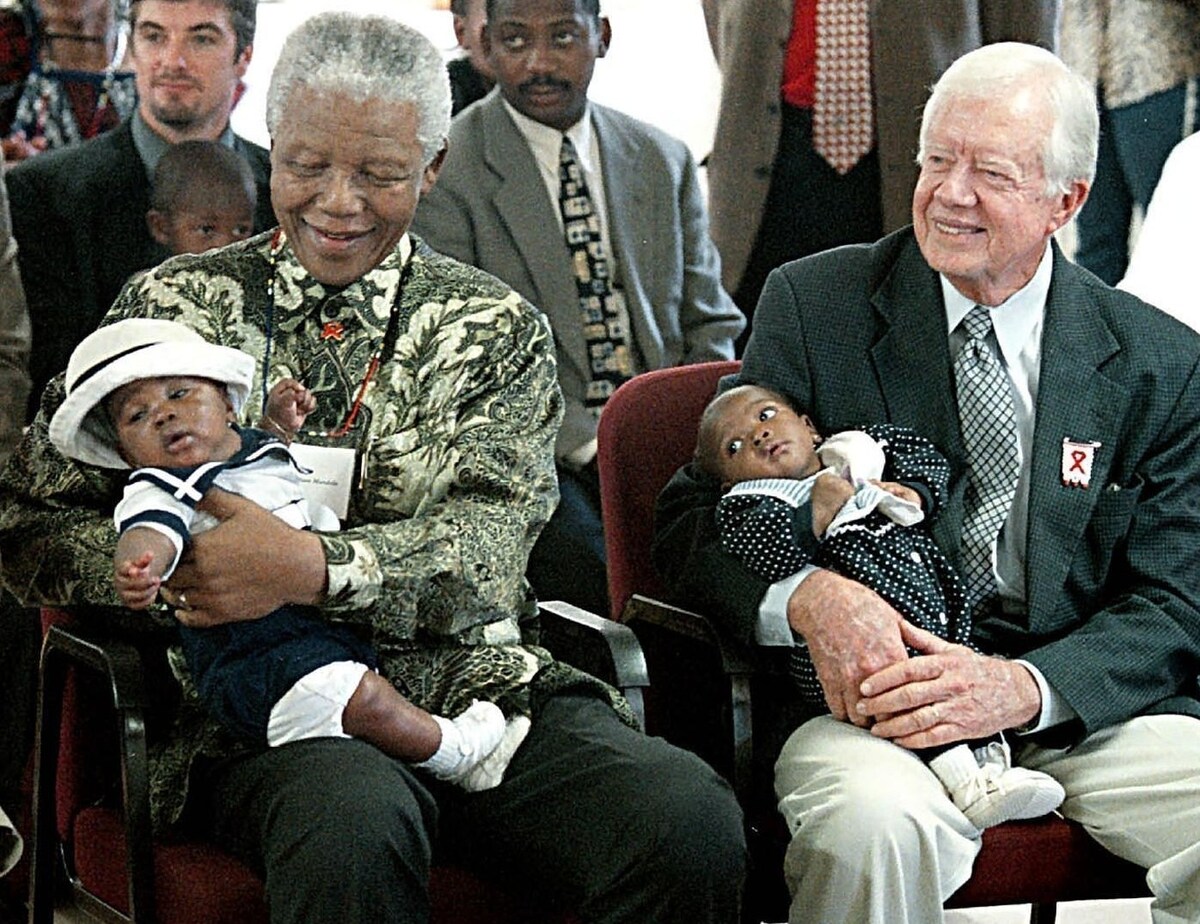 A long legacy in global health: Former President Jimmy Carter has worked to end neglected diseases since 1982. Here he sits with former South African President Nelson Mandela at a ceremony in Soweto, celebrating a new AIDS project in 2002.

When former President Jimmy Carter spoke at the American Museum of Natural History in New York this past January, the 90-year-old's bright blue eyes seemed to grow even more intensely blue, as he stood tall and spoke with the crisp command of a much younger man.

The occasion was the opening of "Countdown to Zero," an exhibition exploring disease eradication and the Carter Center's success in global health since its inception in 1982. The nonprofit has made huge progress toward wiping out Guinea worm and river blindness in Africa and Asia.

Carter's dry sense of humor was also on display that morning, as he explained how he founded the Carter Center, "after my involuntary retirement from the White House after the election in 1980." And he played the seasoned politician when he deflected a political question about the latest Washington controversy to turn the discussion back to global health issues.

Later that afternoon, the 2002 Nobel laureate granted me a six-minute telephone interview. At first, he charmed me with small talk in his characteristic Southern drawl. Then he provided a thorough overview — replete with facts, figures and statistics — about Guinea worm and other neglected tropical diseases on which the Carter Center focuses.

Although many of these diseases no longer exist in the developed world, they still affect "hundreds of millions of people" in the poorest nations on Earth, Carter said. An exhibition like "Countdown to Zero" is an essential educational tool to help people realize that and to understand why the Carter Center has spent the past three decades trying to end these diseases, he explained.

Carter himself has witnessed firsthand the need to fight Guinea worm, river blindness and elephantiasis. While traveling to remote villages in Ghana, Nigeria, Ethiopia, South Sudan and elsewhere, Carter has seen the suffering these tropical diseases cause men, women and children of all ages.

And then, just as Carter efficiently completed this thought, my time was up! My audio recorder hit the six-minute mark as Carter cheerfully said, "Well, it was nice talking to you." Talk about smooth!

Now Carter is himself facing a disease — cancer. At a news conference Thursday morning, he revealed doctors had found "four spots of melanoma on my brain — small spots." The melanoma had also spread to his liver, he said, and radiation treatment would begin right away.

Even so, Carter was "perfectly at ease with whatever comes," he said. "Surprisingly at ease," he repeated. "Much more than my wife."

This is not the first time that Carter has faced danger or mortality. In his recent book, A Full Life: Reflections at Ninety, Carter recounts how he was nearly lost at sea in 1948. He was a young naval officer, serving on a submarine, when an enormous storm wave swept him overboard from his post on the bridge. The next year, another ship approached far too close to his submarine in a dense fog and almost collided. These two close calls, Carter wrote, made him realize "how fragile was my existence."

In his book, he also discusses pancreatic cancer — which killed his father at age 59, his sister Ruth at age 54, his brother Billy at age 51 and his last remaining sibling, Gloria, when she was 64.

Because of this unusual family history — only a few other families worldwide appear to have this same genetic defect, possibly triggered by smoking cigarettes — Carter has been tested regularly for possible symptoms for many years now. The fact that he was the only nonsmoker in his family may have led to his longer life, Carter writes.

Cancer is one disease that we are still far away from eliminating. But back in January, Carter was beaming at the fact that the Carter Center's efforts had brought Guinea worm to the edge of eradication. Since the campaign against the parasite began in 1986, cases worldwide have plummeted from about 3.5 million in 20 countries to 126 in four countries last year.

Here's hoping that Carter will live to witness the end of Guinea worm. It would be only the second human disease, after smallpox, ever to be eradicated worldwide. That would be a remarkable achievement for a remarkable humanitarian.